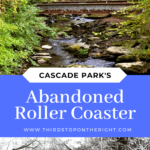 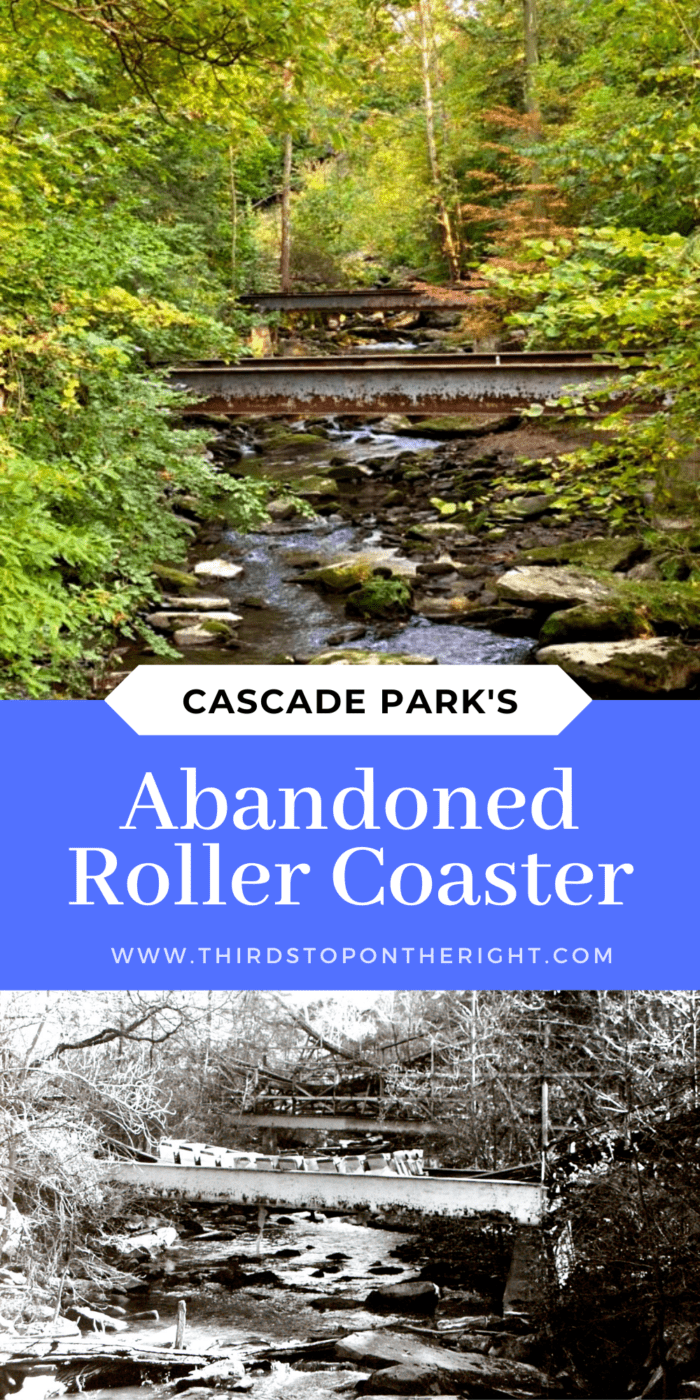 *Note: Special thanks to Fedele Musso, who took most of the vintage photos from the 1980s when the park closed. I was able to come across Mr. Musso’s photos on Ebay and purchased them for use in my own collection. While they are watermarked with the blog’s name so they cannot be stolen, they were taken by him. All of the present day photos are my own work. Other photos are courtesy of the Lawrence County Historical Society.*

Cascade Park in New Castle is probably one of my favorite defunct Western Pennsylvania amusement parks. Maybe its because of its fantastic history as an amusement park, but what I think is even more fascinating about the former park is how much of the old park remains — you just need to know where to look.

Cascade Park’s very first roller coaster was a figure-eight toboggan coaster which was located beside the dance hall, where the parking lot now is. This coaster lasted until 1922 when it was replaced by the park’s first “modern” roller coaster — The Gorge. 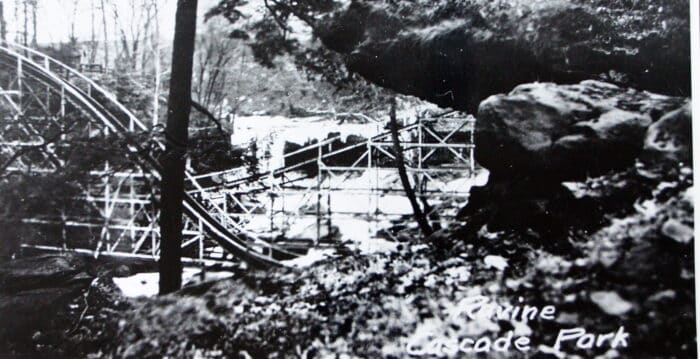 This is one of the few photos of the Gorge roller coaster.

Cascade Park’s second roller coaster was introduced in 1922. Instead of being located on a flat surface as the old side friction coaster was, the Gorge utilized the park’s natural terrain, racing through the tree-lined gorge and featuring dips and curves. 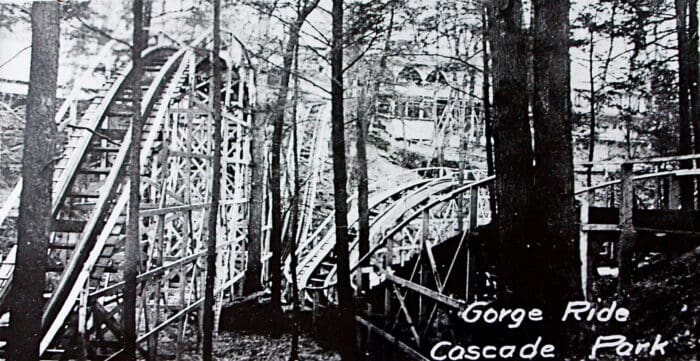 This photo features one of the Gorge roller coaster’s famous drops into the ravine. The carousel building can be seen on the opposite side of the ravine.

Although the coaster was very popular among parkers, the Gorge only lasted 14 years.

In 1936, the Gorge did not open for the season. Upon inspection of the ride, it was determined that there was so much termite damage that the ride was unsalvageable. It took three years to dismantle the coaster and Cascade Park went another 15 years without a roller coaster. 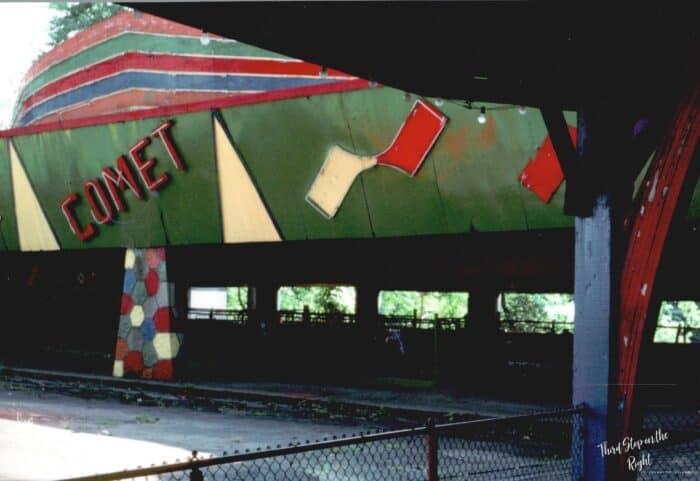 After it was abandoned the old rolling stock which hadn’t been pushed into the ravine could still be seen in the station. 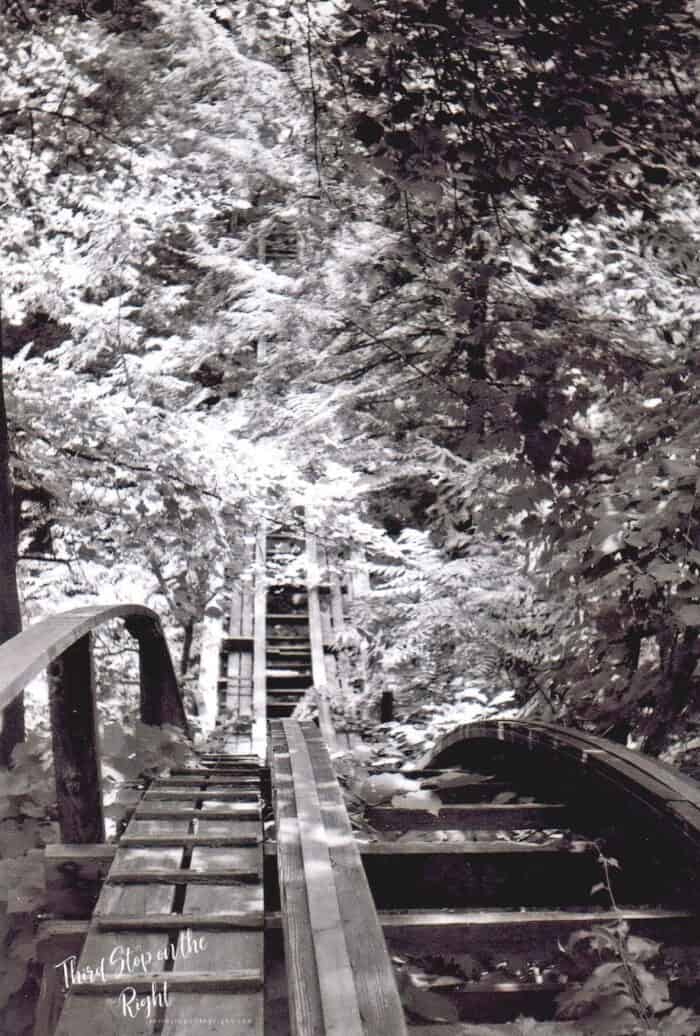 One of the Comet’s plunges into the ravine.

It was known as a “gulley” coaster because it ran low to the ground and utilized the park’s natural terrain. 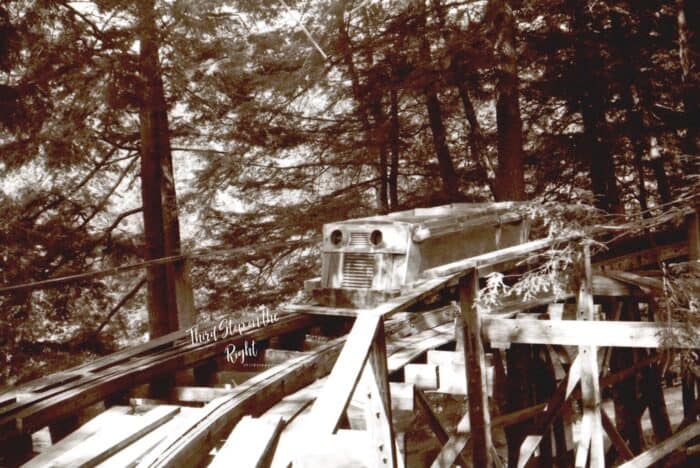 It was 65 feet high and 2,400 feet long, with cars designed by National Amusement Devices in the Century Flyer style. 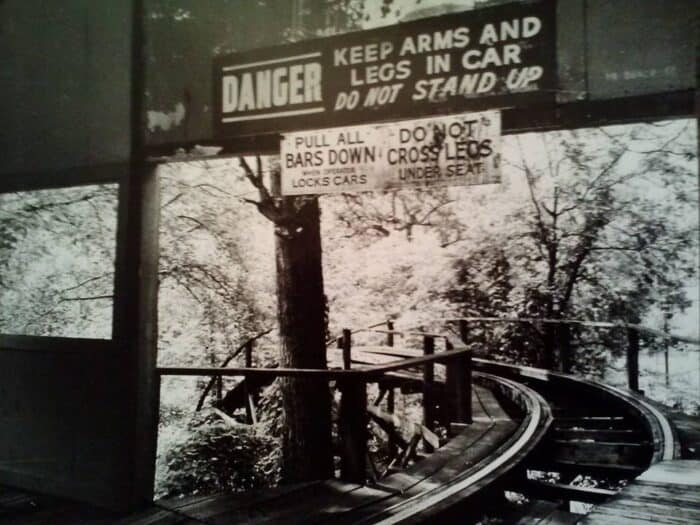 This image shows the Comet’s initial drop immediately out of the station. (Photo courtesy of the Lawrence County Historical Society)

Instead of an initial lift hill, the comet had a lift hill towards the end of the ride. 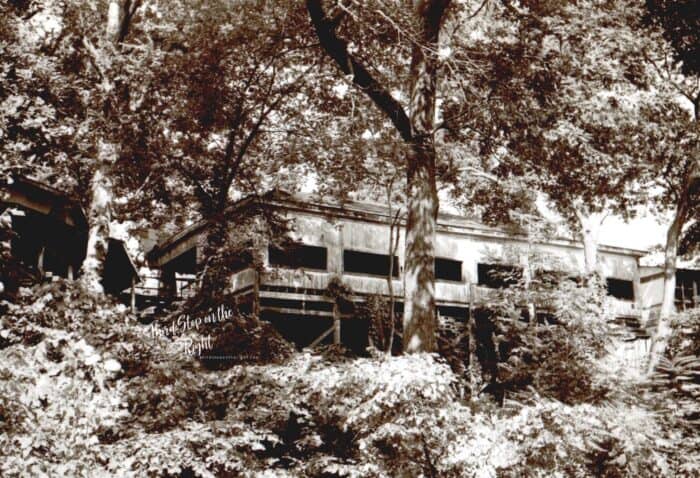 This is a view of the old Comet station which sat at the top of the ravine.

Upon leaving the station, the trains dropped almost immediately into the ravine where riders had to dodge low-hanging trees, underbrush, and vines. The ride featured several good hills, but the real thrill was the finale. 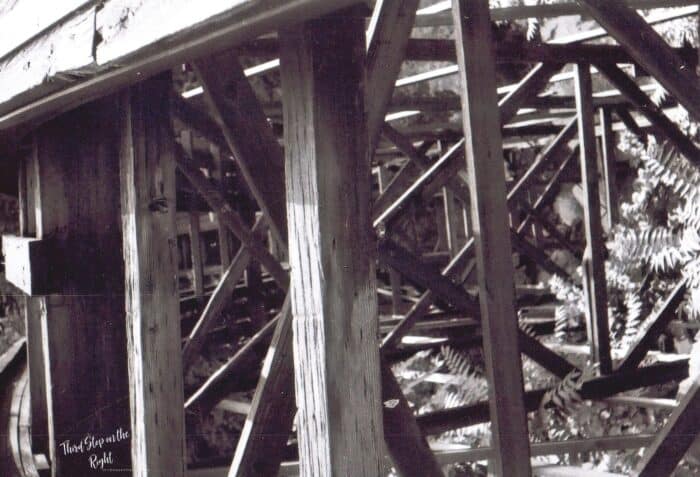 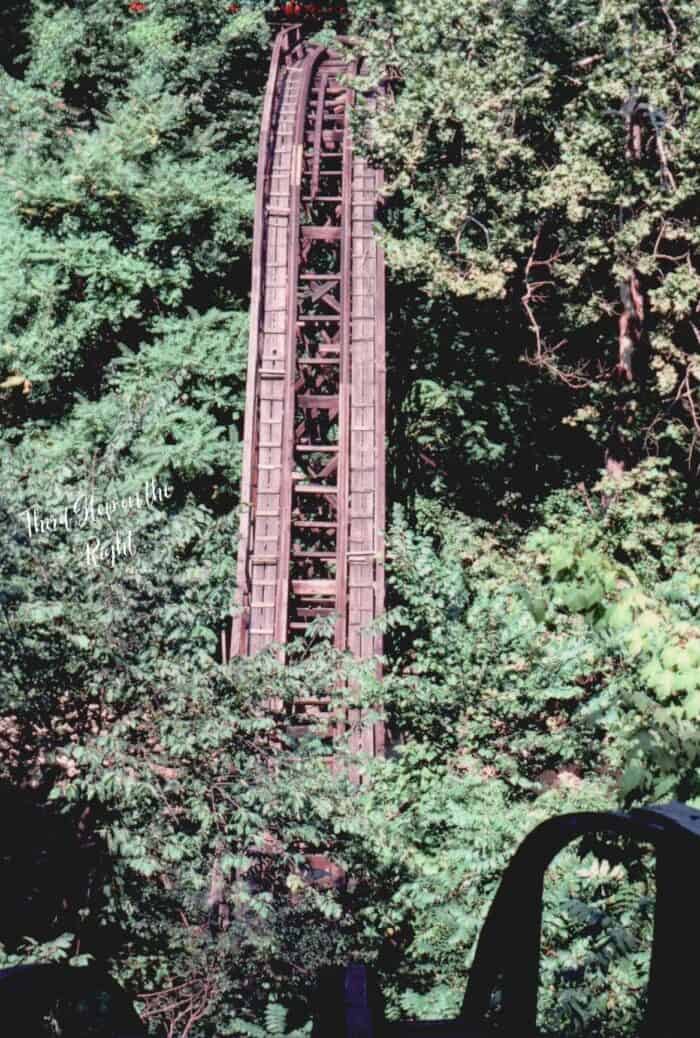 One of the final plunges into the ravine before the train reentered the brake run.

After being hauled up a chain lift, the trains made a sharp 180-degree right turn and dove down a very steep hill into the ravine toward the creek below. After a sharp pull-out, the train made a sharp left-hand turn and returned to the brake run/station. 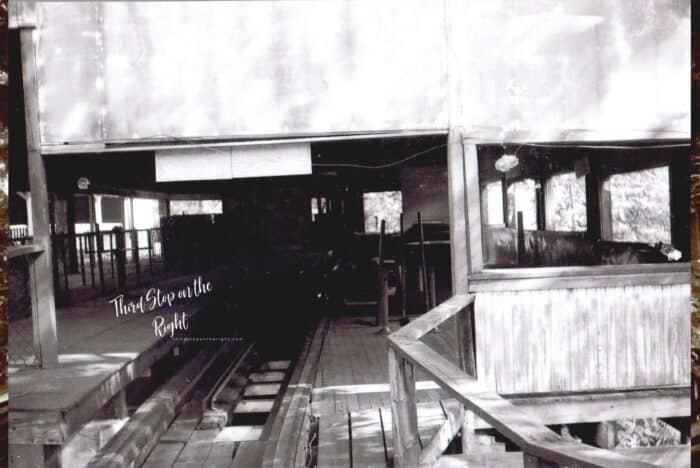 This view is looking into the station immediately before the drop. If you look closely on the right-hand side you can see the extra train that is still in the station. 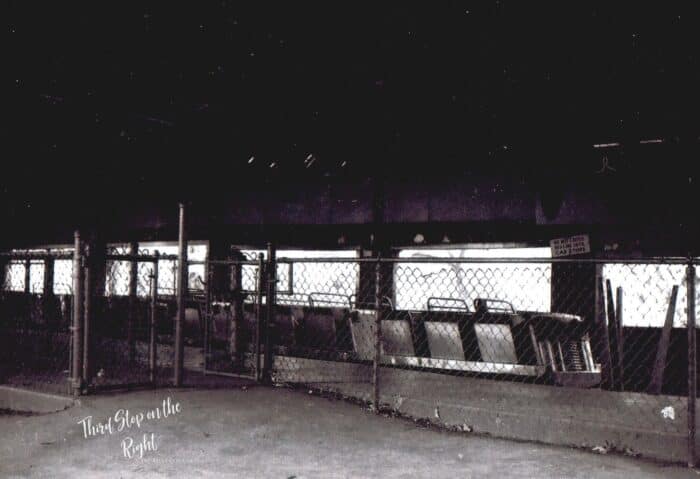 The extra Comet train sits forever idled in the station, experiencing a better fate than the other train. 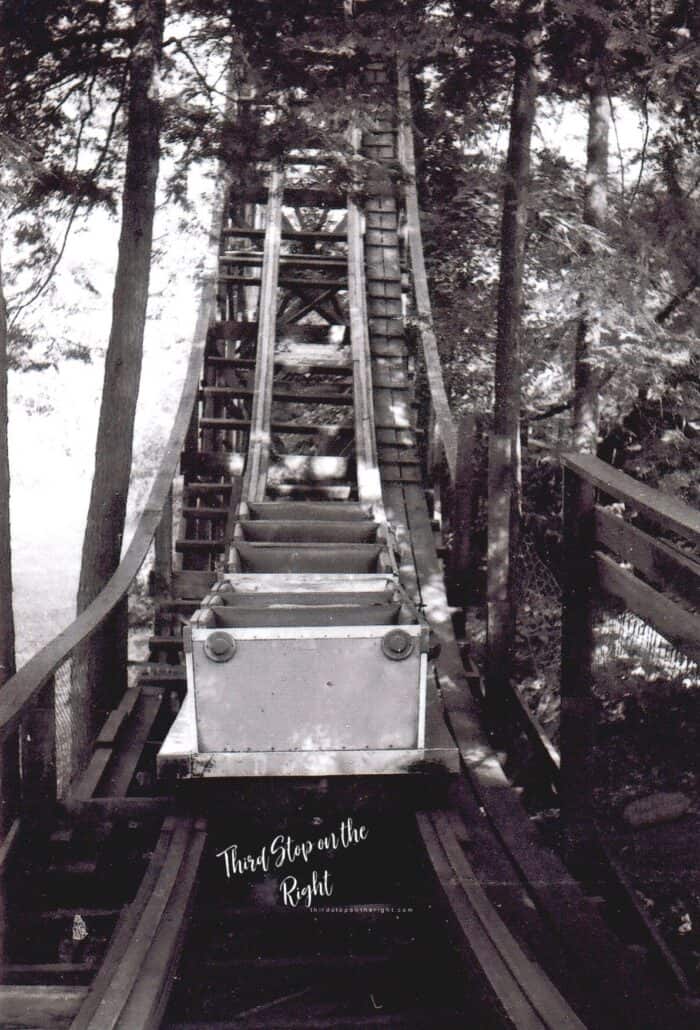 A comet train sitting abandoned on the tracks.

In 1982, the Comet ceased operations after a tree fell on the track. This was also the last year any other rides operated in the park as Vesco was told to remove his rides. Several weeks after the ride stopped operating, vandals pushed one of the trains down the tracks into the ravine. The cars sat in that ravine for several years until eventually the ride was torn down.

The Legend of the Comet

Although the Comet roller coaster may no longer be around, to a careful observer there are still some very cool remnants to be found. The most obvious of there are the roller coaster footers located almost directly below the falls in Big Run Gorge. From the road above you can see the concrete footers with metal beams protruding. 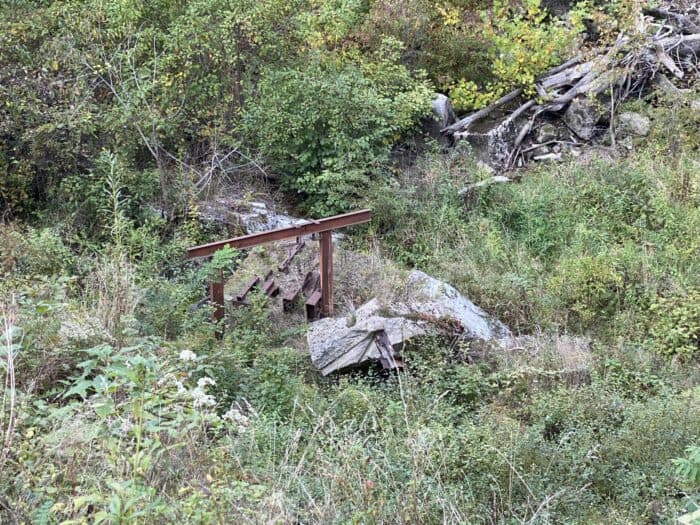 The old footers from the Comet roller coaster can be seen from the parking lot just below the falls.

To get down to these footers it can be a pretty steep climb so if you choose to do so, proceed carefully. However, there is an even better secret hiding in the woods.

If you follow the pathway down beyond the former carousel building to where the bocce ball courts are and you will see a small clearing where the coaster station once stood. If you climb down the hillside in this clearing toward the creek, you will find the largest remains of the roller coaster. 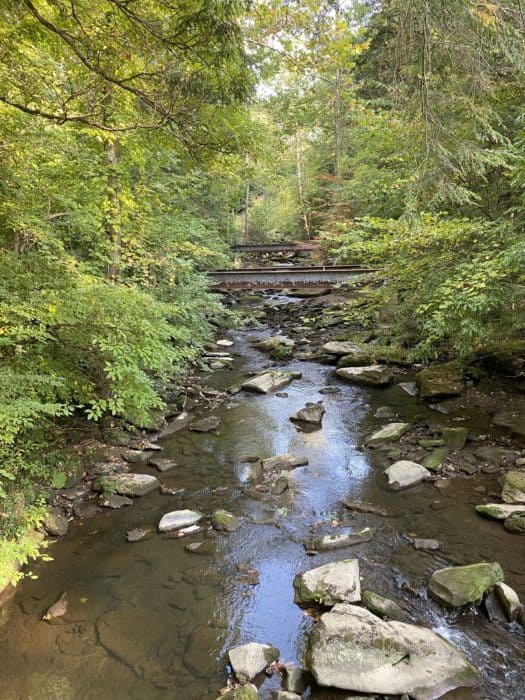 These are two of the large trestles that remain hidden in the woods at Cascade Park. 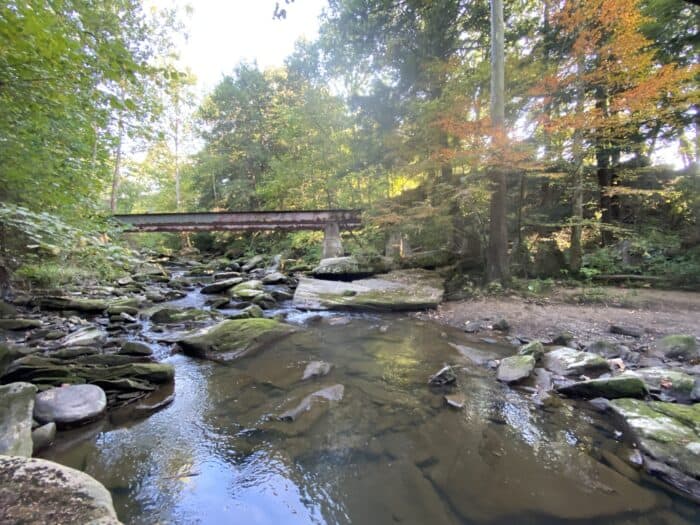 Two large former trestles that once held the coaster tracks as the Comet roared across the creek are still standing. 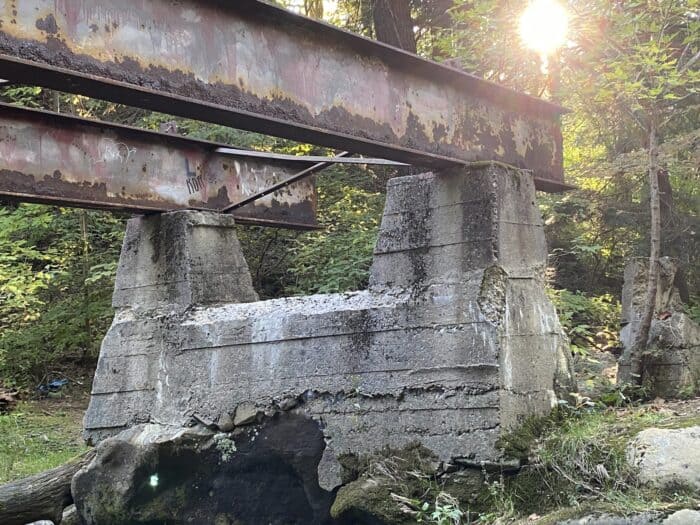 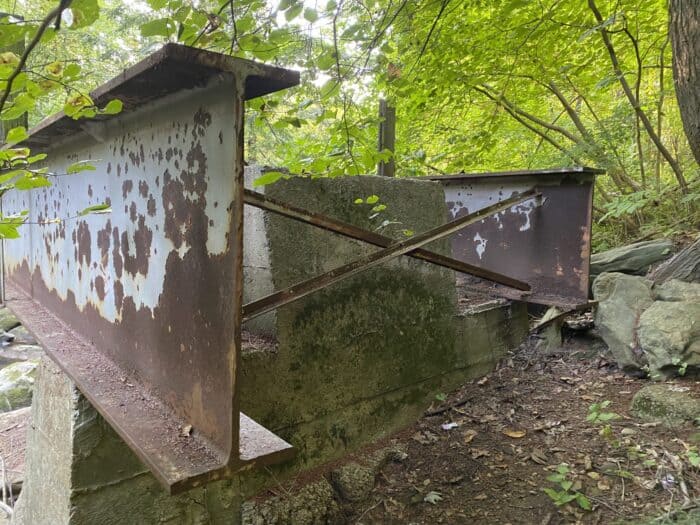 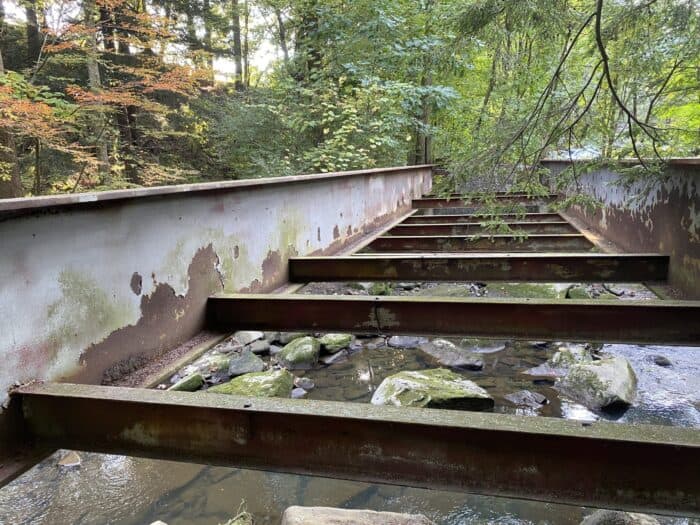 These trestles are in perfect shape and you can envision the old coaster thundering over them. 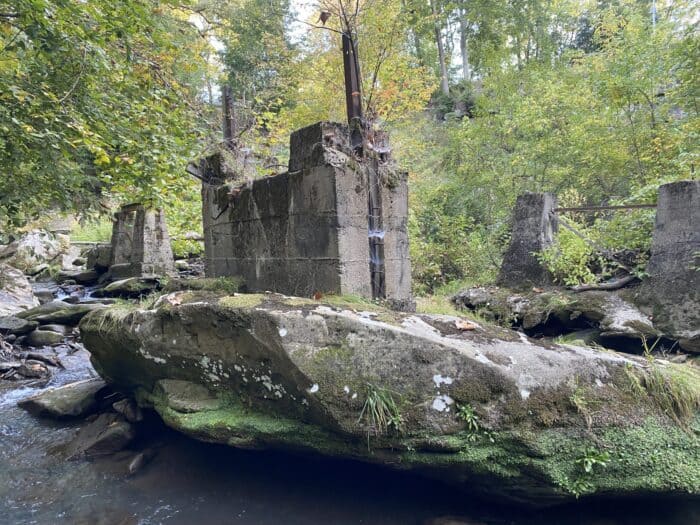 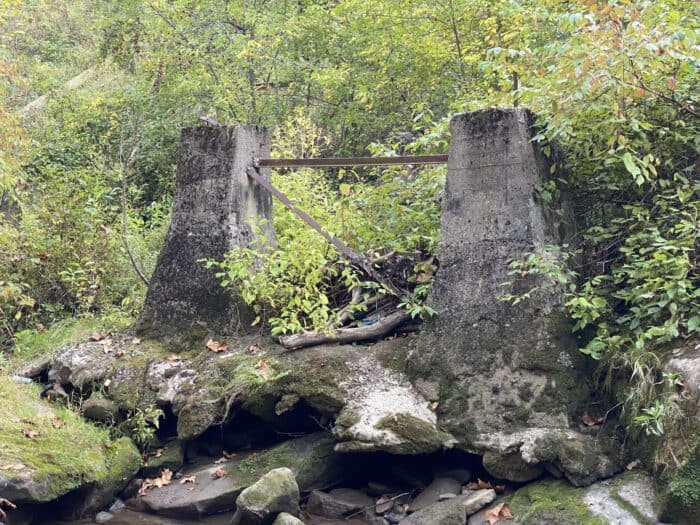 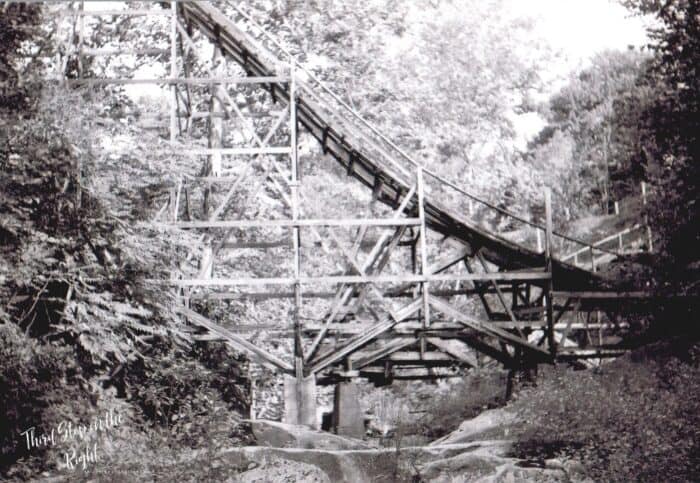 You can see the footers when they were in use in this picture of the Comet in its heyday.

If the water is low, you can hike up the creek to get a better view of the footers that can be seen from the parking lot. 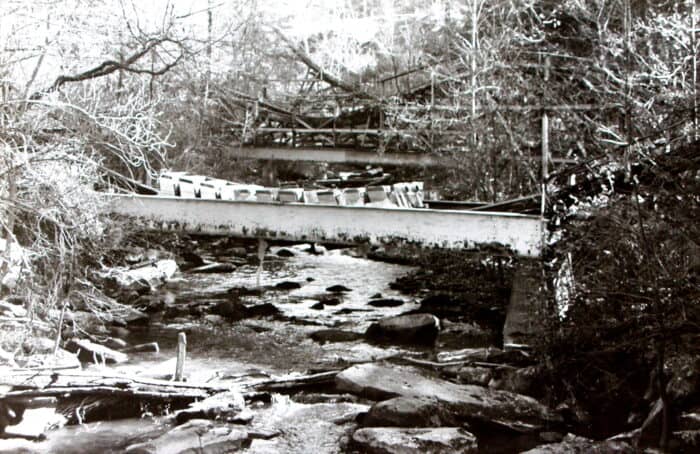 The Comet roller coaster after it was abandoned and the train had been pushed into the gorge. Notice the arrangement of the trestles in comparison to the modern day picture below. 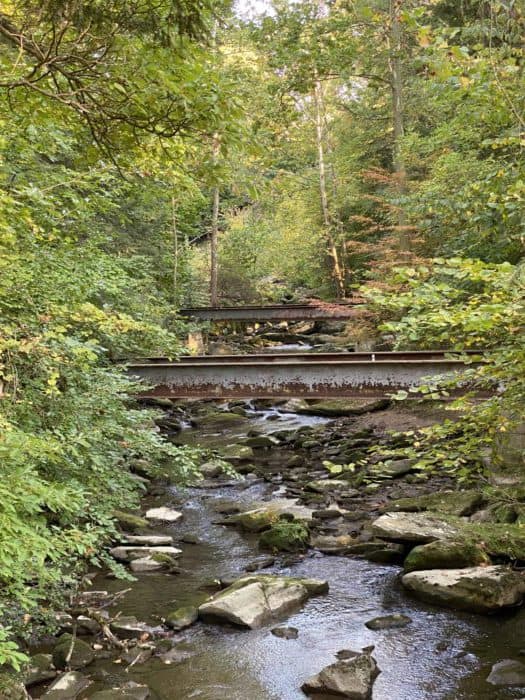 This is a comparison photo taken from almost the same angle showing the trestles and the trestle where the roller coaster cars were pushed into.

I love being able to compare some old photos from when the Comet coaster was still standing with the photos I took of the remnants. Although the coaster stopped operating before I was even born, I love that I am able to still experience a little bit of the Comet’s legacy at Cascade Park today.

So cool! Graduated from Shenango in 1986 and spent a LOT of time at Cascade Park. Was always fascinated by this coaster. Thank you for putting this together! Have lived in Florida for over 30 years so this was a nice little trip in the way- back machine!

All of these photos marked "third stop on the right"are my copyrighted photos. I suggest you give credit to me instead of your fraudulent usage

Many of these are my copyrighted photos taken in early 1980's used without my permission. so you better note it on this article.