Abandoned Pennsylvania Locations You Have to See to Believe 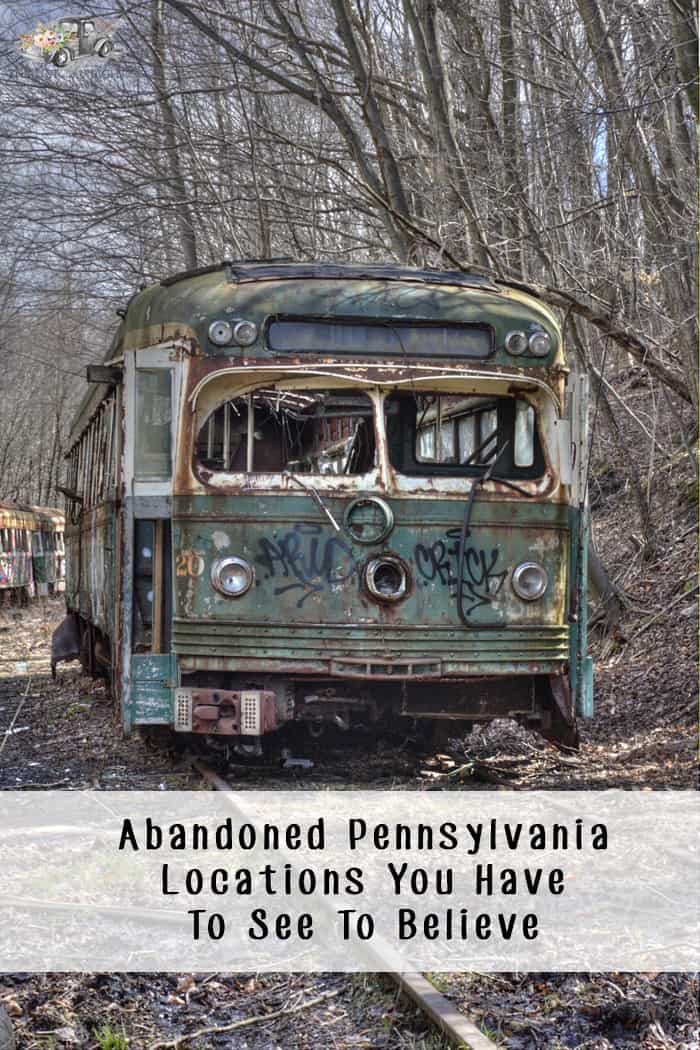 Some see them as blight, other see them as beauty. No matter how you see abandoned architecture there is no denying there is something about rotting and crumbling buildings that sparks curiosity and fascination. These locations are no exception.

While some of these sites are the remnants of long-gone industry, others were once thriving communities. Others still were places to get away from the stresses of everyday life. Whatever they used to be, these locations are now abandoned, slowly being reclaimed by nature. 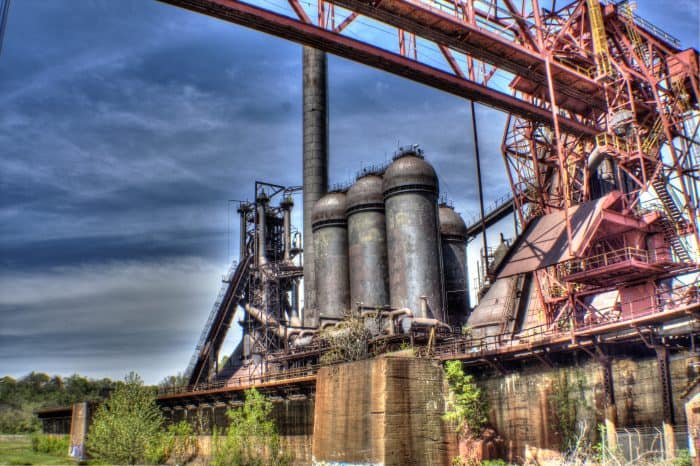 Located along the Monongahela River in Swissvale, the Carrie Furnace blast furnaces were once part of the Homestead Steel Works. In fact, they, as well as the adjacent hot metal bridge, are all that is left of the Homestead Steel Works. The furnaces were built in 1884 and operated until 1982. While much of the site is gone furnaces #6 and #7 remain and were designated National Historic Landmarks in 2006.

The site is currently managed by the nonprofit Rivers of Steel Heritage Corporation, which conducts tours and other programs from May through October. There is even a photography tour which gives those interested in abandoned architecture the opportunity to explore legally. 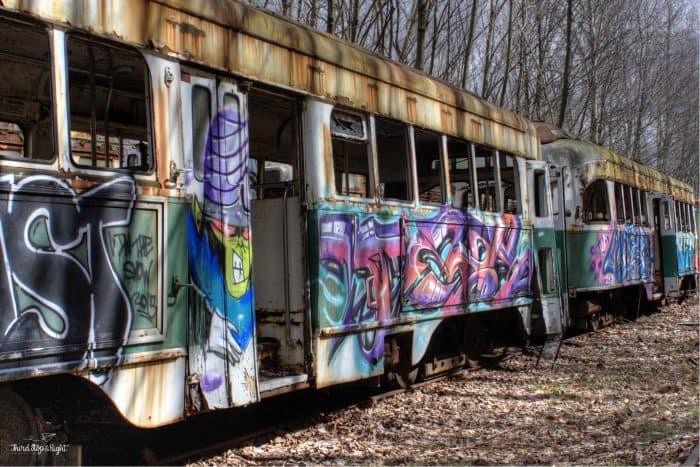 Located in Western Pennsylvania, this trolley graveyard is actually a private collection. The collection at the site is pretty vast and it can be a lot to take in at first glance. Trolley rails snake back into the woods, with seemingly never-ending lines of trolley cars lined up on them. Nature is clearly taking back what was once its. Trees and undergrowth are literally growing up, around, and through the cars. There are historic cars such as the 1976 Philadelphia Bicentennial cars and even some cars that date back to 1919! 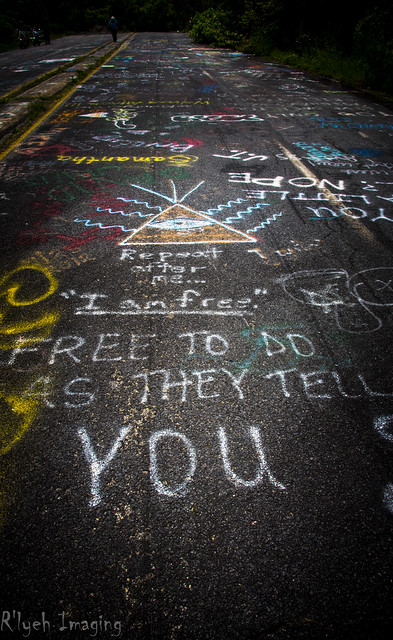 Centralia started out as a rather nondescript coal town with approximately 1,000 residents. It’s one of those towns that surely would have been forgotten if it wasn’t for an underground mine fire that started over 50 years ago. The fire supposedly started accidentally when some burning trash came in contact with an underground coal seam. The government tried unsuccessfully to put out the fire, but after spending years and over $7 million, it was determined that it would be easier to remove the residents and let the fire burn. Now, except for a handful of residents Centralia is a complete ghost town with most of the former buildings having been torn down. The fire is still burning and sometimes you can catch glimpses of the smoke seeping up through cracks in the ground. I’ve even heard that you can actually fry an egg on some of the old roads.

There isn’t much left in Centralia, but if you do go be sure to check out the graffiti highway as well as The Assumption of the Blessed Virgin Mary Ukrainian Church. The church has a very cool history and is one of the only buildings in the town built on rock and not coal. 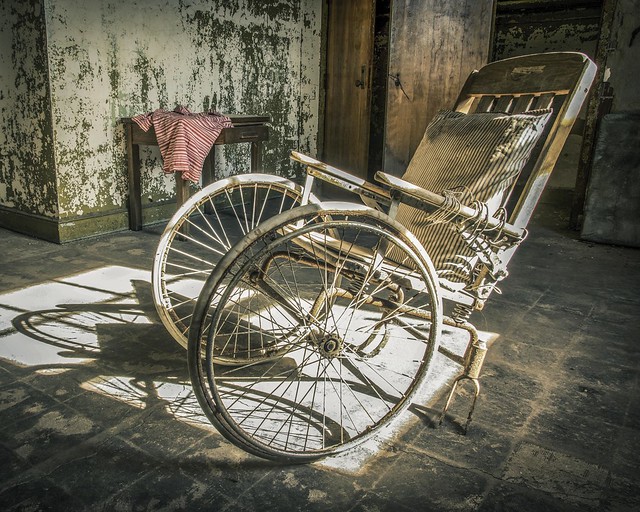 As far as asylums go, Pennhurst is probably Pennsylvania’s best known and has the darkest history. Originally known as the Eastern Pennsylvania State Institution for the Feeble-Minded and Epileptic, Pennhurst was built in 1903 and after years of controversy, closed in 1987. In 2010 the main building was purchased and partially renovated and reopened as the Pennhurst Asylum Haunted House. Many of the buildings are still fully abandoned and left to decay. A few have been torn down and a few are being renovated.

Pennhurst Asylum does offer photography tours, daylight history tours, and even paranormal investigations. Most of the site is off-limits and no trespassing is allowed. If you are interested in seeing Pennhurst for yourself, I recommend checking out the Pennhurst Asylum website and finding out when the tours are. 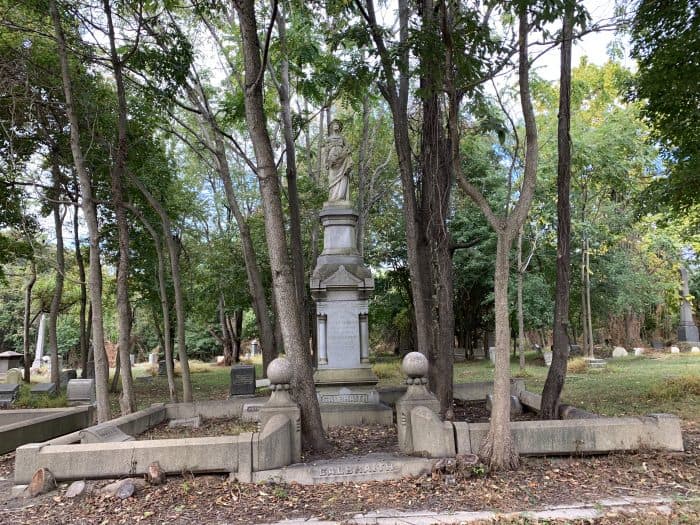 A cemetery plot tucked among the trees at Mount Moriah Cemetery.

Incorporated in 1855, Mount Moriah Cemetery in Philadelphia was modeled after the rural ideal which was popular at the time. The cemetery closed its gates in 2011, having no known owner. Since its closure the cemetery has suffered from neglect and deterioration, being slowly reclaimed by nature. The Friends of Mount Moriah Cemetery, Inc., a nonprofit, has taken steps at restoration and clearing of the weeds, in attempt to return the cemetery back to its original state.

Efforts to restore the cemetery are underway and it is open for visits. Be sure to check out the ornate Romanesque entrance and gatehouse. Although they are gated off and in disrepair, there is hope that eventually they will be able to stabilize and restore these elements of the cemetery. 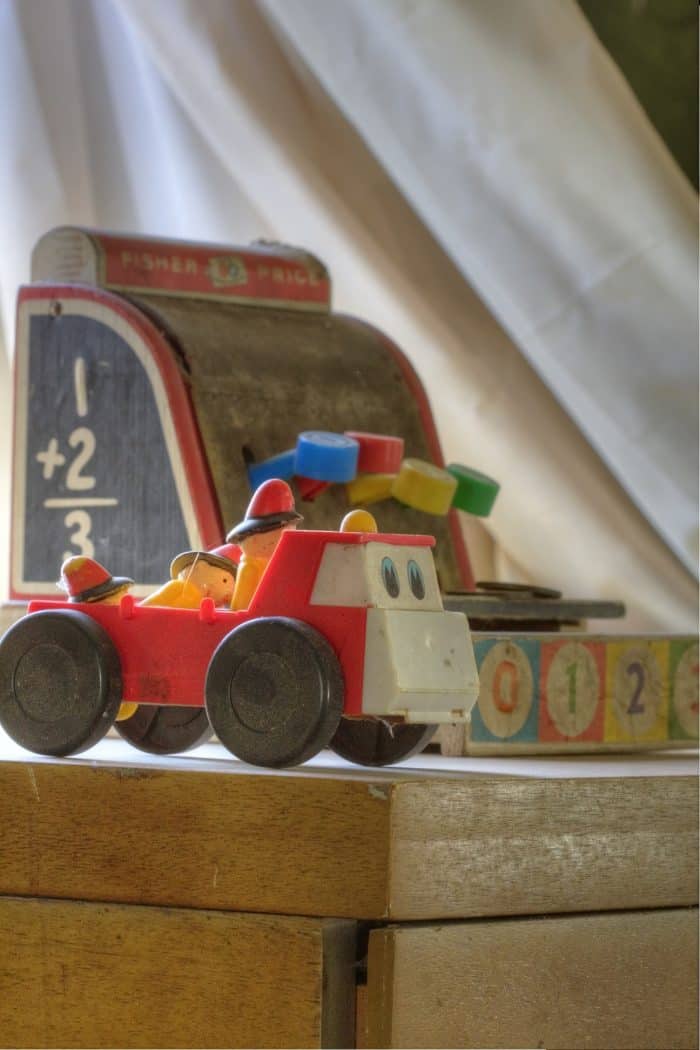 Built during the 1910s and 1920s, Yellow Dog Village was built by the Pittsburgh Limestone Company for its miners. The company made a deal with its miners that they would take care of the workers and their families in exchange for their promise not to unionize. The town thrived until the 1970s when sewage issues began to emerge. The number of residents dwindled until the last resident vacated the village in 2011, leaving the once busy village a ghost town.

The abandoned houses soon fell victim to vandalism and decay. However, a new owner bought the properties in 2014 and hopes to renovate it into a historical attraction where visitors can learn about mines, the town, and the people.

The village is currently open for both history tours as well as photography tours. To find out more about the tours or to make arrangements to visit, check out the Yellow Dog Village website. The tours are fairly inexpensive and help to support the renovations of the village so instead of trying to sneak in, just ask. 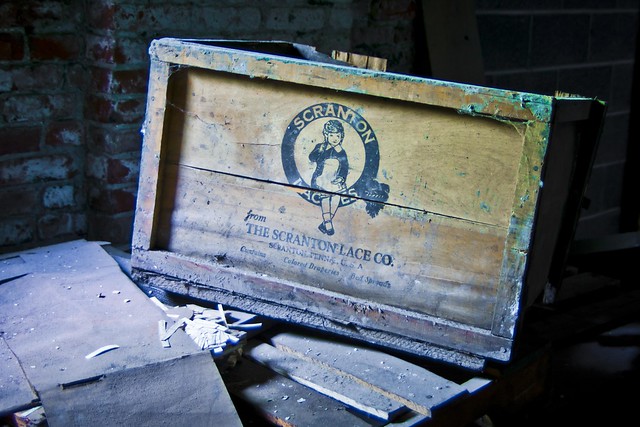 The Scranton Lace Company was once the world leader in the production of Nottingham Lace and also produced tablecloths, napkins, valances, and shower curtains. Incorporated in 1897, the factory ceased operations in 2002 with the company’s vice president telling its employees, mid-shift, that the facility was closing “effective immediately”. The factory once featured a theater, bowling alley, gymnasium, infirmary, and a landmark clocktower. The site has deteriorated significantly in the past 16 years with scrapping and interior demolition erasing much of the features that defined it.

Starting in June 2018, demolition began on the Scranton Lace factory. 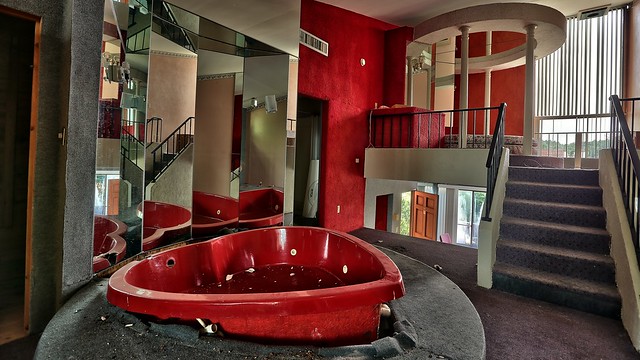 In its heyday the Penn Hills Resort in the Poconos Mountains of Pennsylvania featured two wedding bell-shaped swimming pools, candy apple red heart-shaped jacuzzis, round beds, an ice rink, ski slopes, and a golf course. Built in 1944 it became a popular honeymoon destination, and later, a swingers hangout. Over the years, the resort’s popularity dwindled and the resort closed in 2009 after the owner died at 102. Owning more than a million dollars in back taxes, the property was acquired by the county and parceled off. Falling victim to vandals, arsonists, and scrappers the Penn Hills Resort is in pretty bad shape. Several arsons, including one in 2017 that destroyed the main building, only hastened the demise of the resort.

This location is unsafe and no trespassing signs are present. Go at your own risk or just look from a distance. 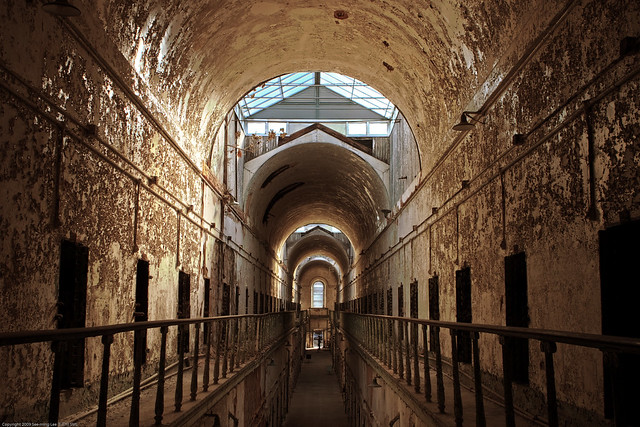 Considered America’s most historic person, Eastern State Penitentiary was built in 1829 and operated until 1971. When it was completed it was the most expensive public structure ever erected in the U.S. After its closing, the penitentiary was all but abandoned. Afterwards vandals smashed windows and skylights and an urban forest grows in the halls and cells. The only remaining residents was a group of feral cats. In 1988 the first efforts were made to protect the penitentiary. Now a National Historic Landmark, the site is in a state of suspended decay with renovations slowly taking place. 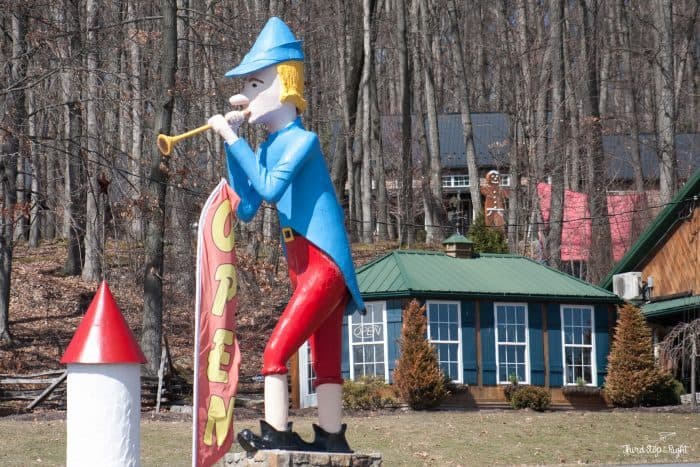 Storyland parks were popular in the 1950s, particularly along roads such as Route 66 and the Lincoln Highway (Route 30). This park was located along Route 30 and boasts an 18-foot tall Pied Piper. There are many remnants of the old park, including concrete storybook characters. The park closed in the 1980s and for a long time fell further and further into disrepair. There used to be a large, white castle at the entrance but that was torn down years ago. In the past decade, the daughter of the original owner has painted and preserved the storybook characters but they are not available to the public.

This private property and trespassing is strictly forbidden. Look from the other side of the street, but do not go into the woods. If you want to see a working storybook park, Storybook Forest in Ligonier is still operational and open for visitors.

Legal disclaimer: The information provided in this article is for informational and historical purposes only. Some of these locations can be visited by booking a tour, others are strictly private property. We do not encourage or condone illegal behavior. 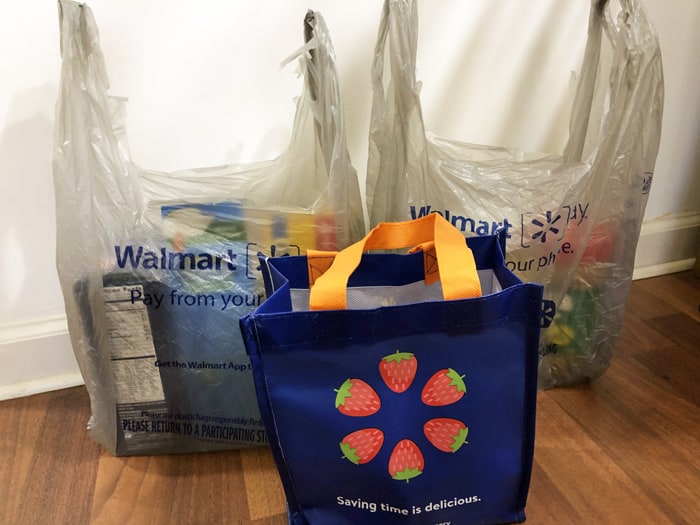 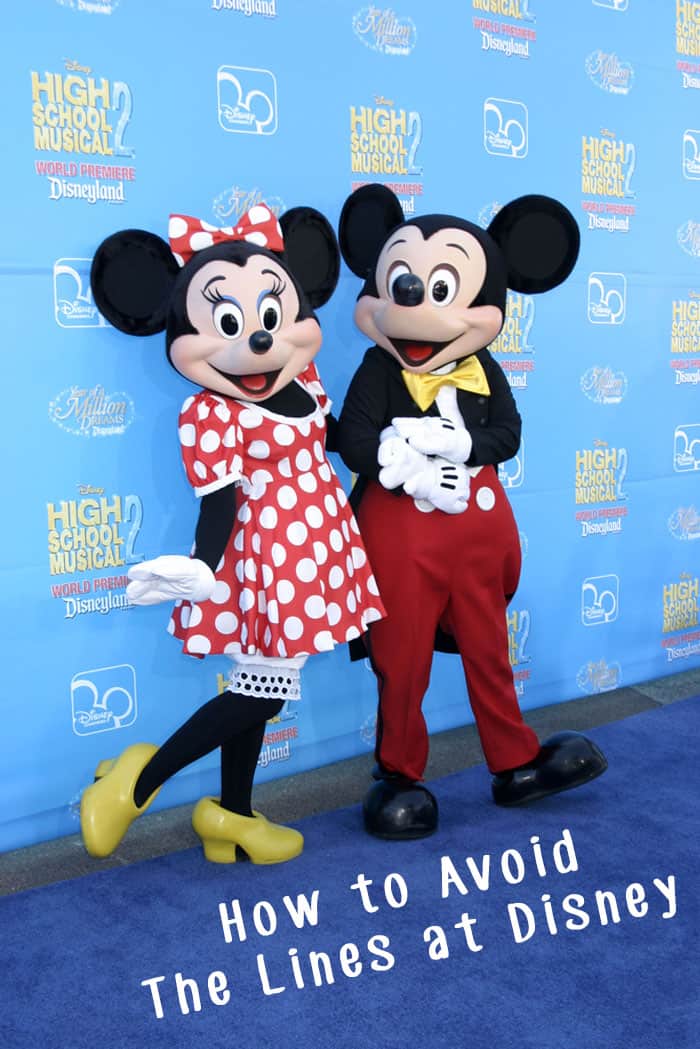 Next →
Top Ways to Avoid Lines at Disney
Click here to cancel reply.

There’s an abandoned hospital in brownsville pa that would be pretty cool to put on the list. i’ve been there multiple times with some friends. There are no signs but it is probably tesspassing