If you frequent Route 30 between Ligonier and Latrobe, you are probably familiar with the old stone quarry tipple which was serviced by the Ligonier Valley Railroad.

The quarry’s north wall was facing Ligonier. Over the years, the quarry operations shifted to this wall as better quality of blue rock was found. 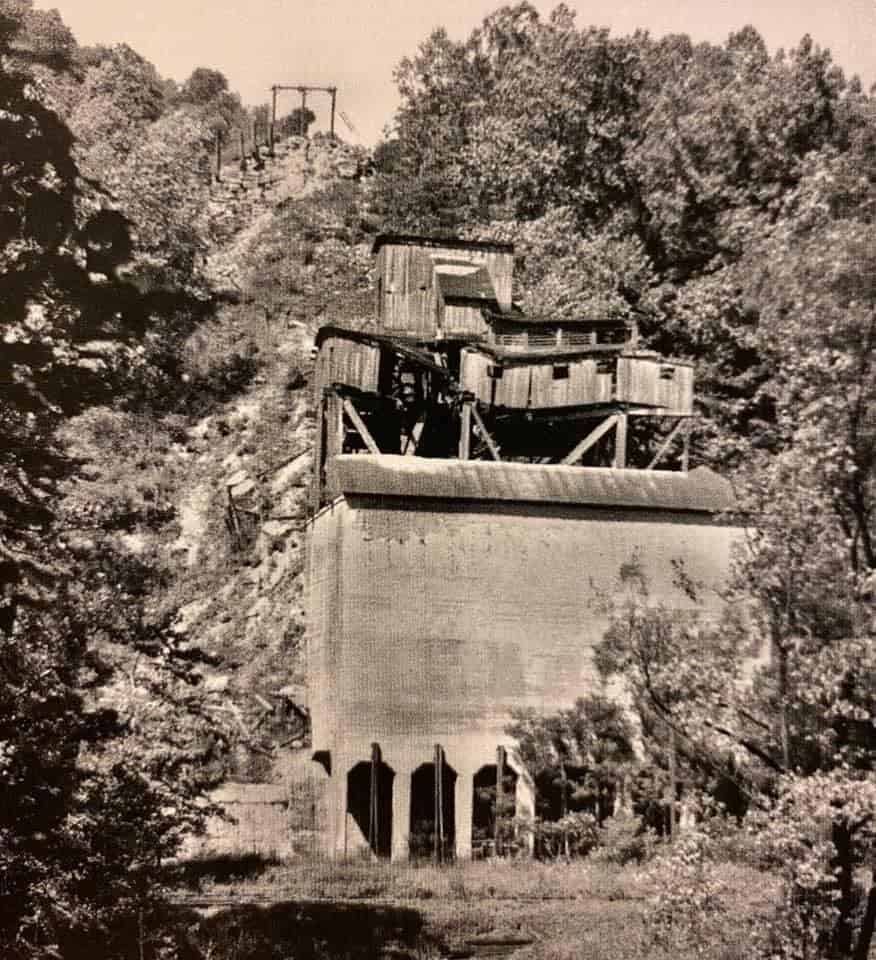 This photo shows the tipple after it was decommissioned in the 1930s. It is apparent that it had fallen into disrepair.

The 30s and 40s weren’t good for the tipple. The Ligonier Valley Railroad was no longer loading railroad cars in the tipple as by this time trucks were loading at the quarry and delivering directly to customers. 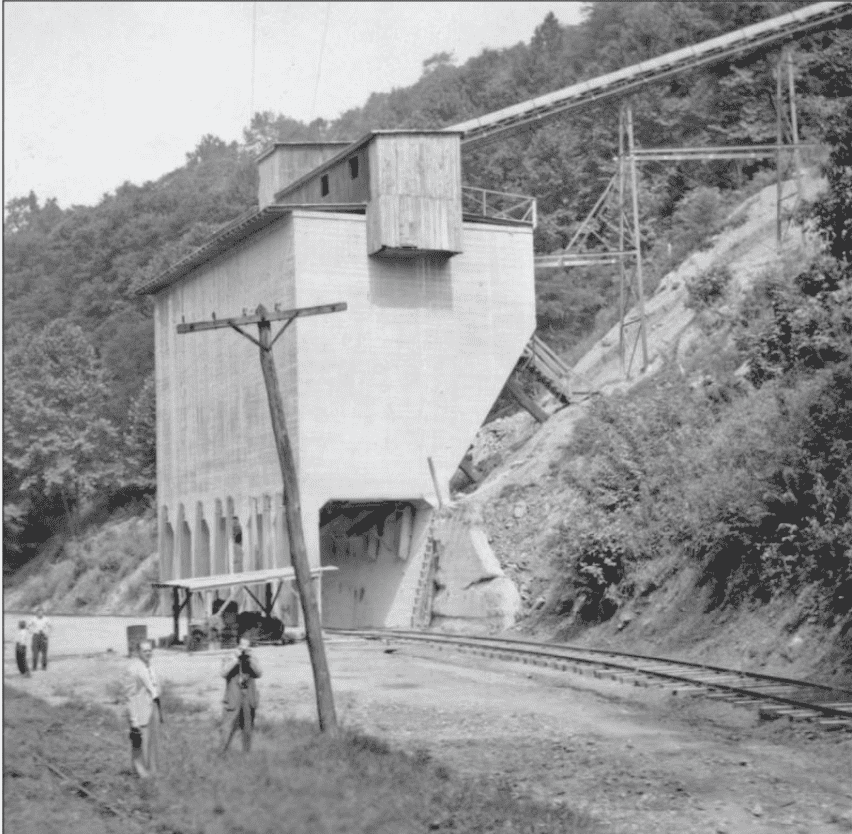 You can see the tipple has been cleaned up and the conveyor replaced on the tipple in the 1950s when it was one again used for the Conemaugh Dam project.

The tipple found some new life around the 1950s when it was upgraded in order to help complete the construction of the Conemaugh Dam. This was probably when the new conveyor belt was added (which remains today). After the job was completed the tipple closed forever. In the two years that it took to complete the dam, more than 447,000 tons of gravel were shipped over the Ligonier line. 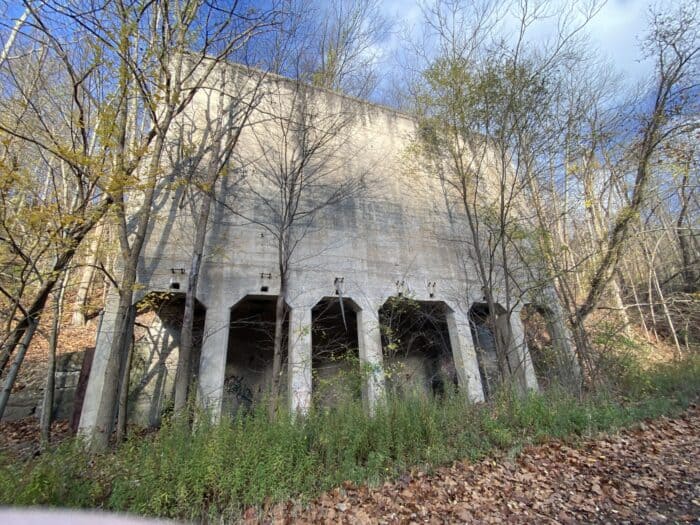 70 years after being decommissioned the Loyalhanna tipple still stands along the Route 30 westbound lanes beside what was once the Ligonier Valley Railroad mainline.

Almost 70 years after the stone tipple loaded its last load, the concrete giant still stands along the westbound lanes of Route 30 beside what was once the Ligonier Valley Railroad right-of-way. Even after all these years, the tipple is still in good overall condition with only a mild amount of graffiti.

I have passed the tipple probably hundreds of times over the years but only just recently made the stop. It turns out it was much more interesting than I thought. 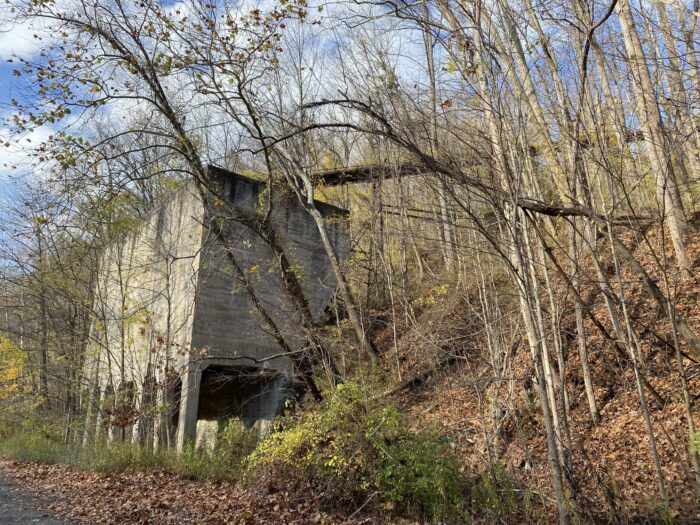 The first thing you’ll notice about the tipple is that that it is huge. It is approximately 44 feet high and 62 feet wide and made of solid concrete. The area where the cars would have been loaded is 16 feet high. Where Route 30 now runs was the site of the former Ligonier Valley Railroad and the cars were pulled into a siding in order to be loaded underneath the tipple. It is quite obvious where this siding once existed. 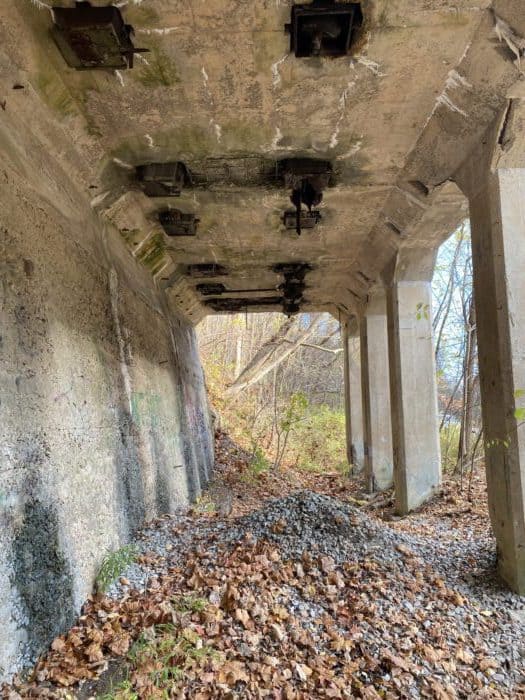 The cars would be pulled under the chutes in order to be loaded. Note the old pile of payload still on the ground under the one chute.

The next noticeable thing about the stone tipple is that by looking at it from the front is that the tipple is not symmetrical. It is divided into six bins of various sizes which were designated for different grades of crushed stone. This is evident by the six arches on the front. 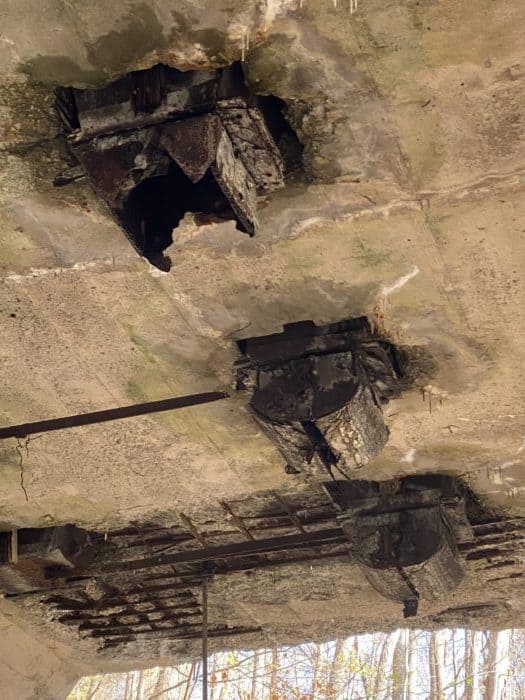 The chute doors to the tipple are still visible. Some of the cutes are open allowing you to see into the tipple hopper above.

On the inside, the chute doors are still visible, some open and some closed. These chutes would have been opened and closed to load the payload into the railcars. Old piles of payload are still visible underneath the chutes. 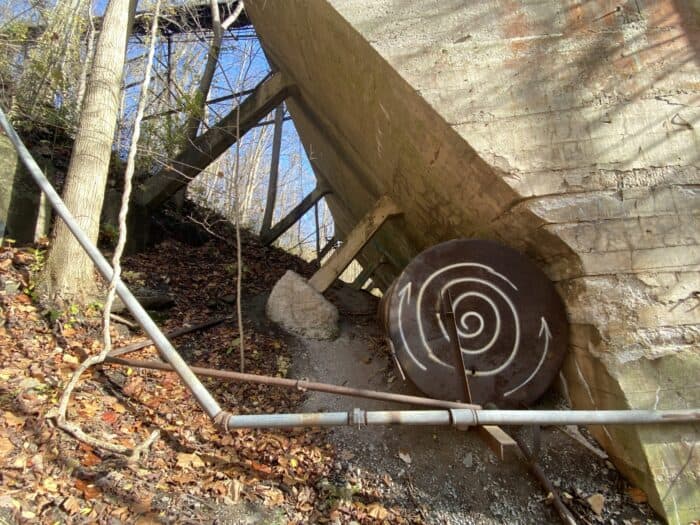 This back view of the tipple shows the supports that hold it to the hillside. 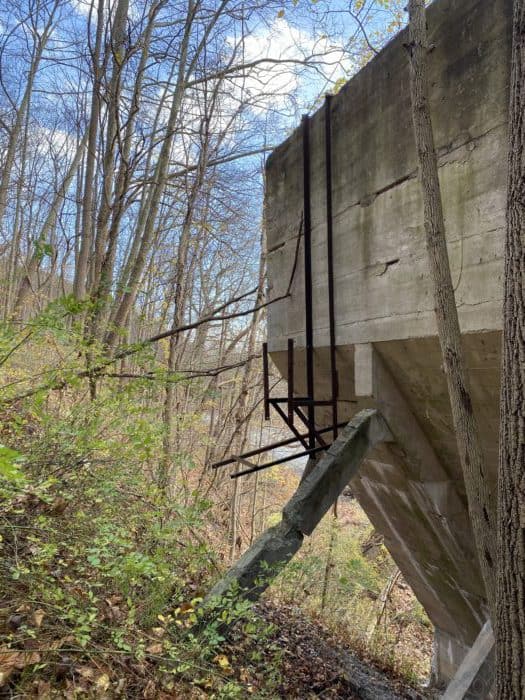 The remains of a ladder can be seen still clinging to the tipple. This ladder once allowed workers to access the top of the tipple.

Of course I hiked around to the back of the tipple to check out the conveyor and other technical workings of the tipple. Something I found very interesting was the top of the tipple which can be seen from the hillside that runs parallel to the tipple. 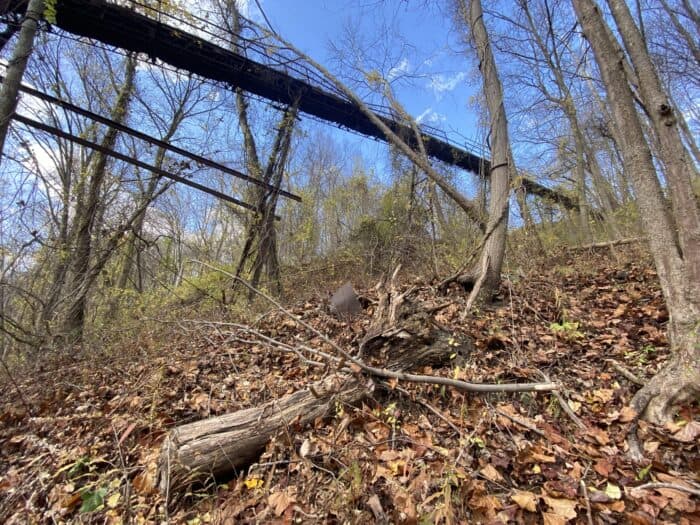 The conveyor the connected the quarry to the tipple still remains stretching across the hillside.

A conveyor is still attached to the tipple, although based on old pictures and just by the visible mechanics it is my guess that this conveyor is one that came in later years and wasn’t necessarily used during the railroad heyday. 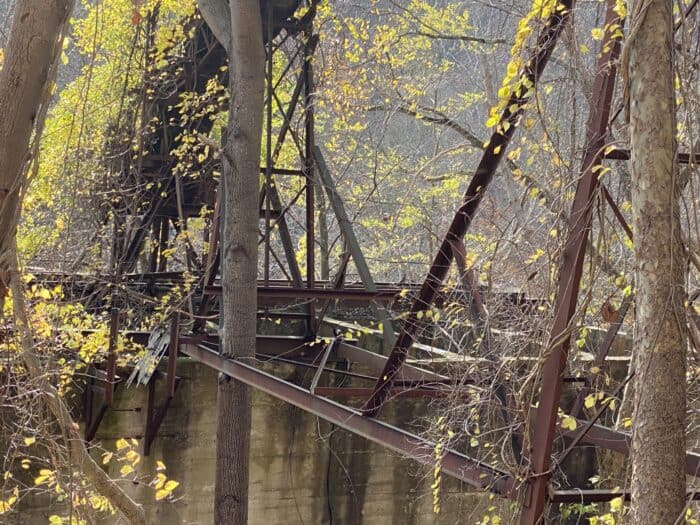 The dump cart rails are visible in this photo. The dump cart stop is visible just to the left of the upright in the center of the photograph. 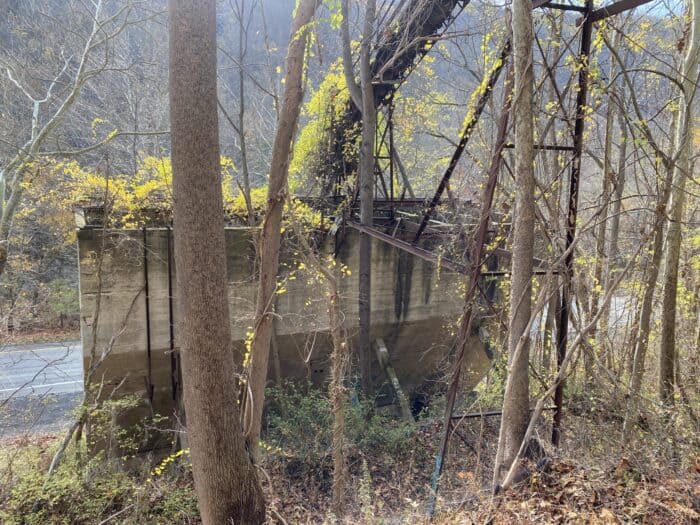 A view of where the conveyor connects to the tipple. The ladder to access the top of the tipple is also visible.

On the top of the stone tipple are a small set of rails which once held a dump card. This cart would be loaded by the conveyor and would move across the rails, sorting payload between the chutes. Rail car stops are visible at the ends of the tracks to keep the cart from falling over the edge of the tipple. 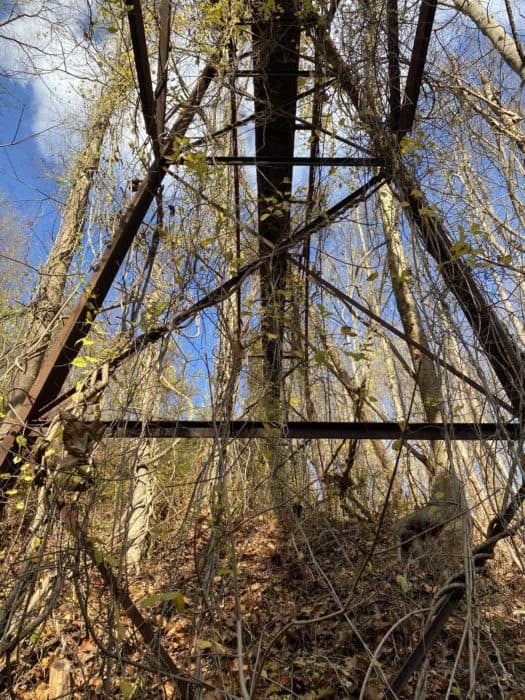 Looking up at the scaffolding to the tipple’s conveyor.

A wooden roof once covered the top of the tipple, although it has long since rotted away. Pieces can be seen sticking out of the chute doors at the bottom of the tipple. 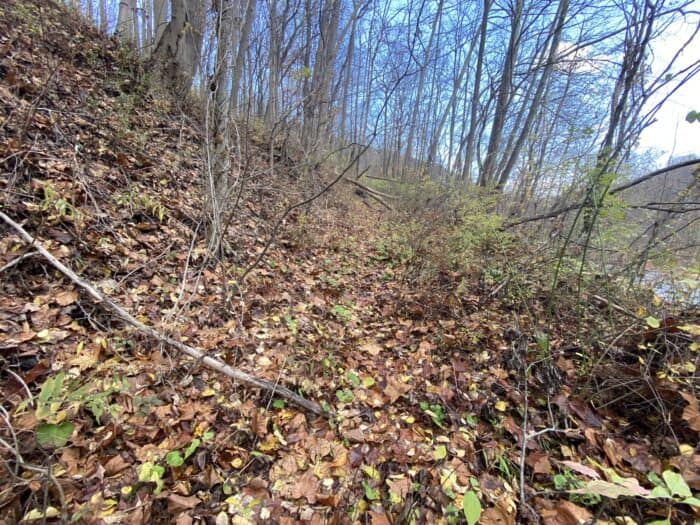 While I was around the back of the tipple, the former railroad grade that traverses the hillside leading to the old quarry was also visible. It’s an interesting reminder of the area’s past railroad days.

While the stone tipple itself may not look like much, it does have an interesting history that is worth checking out if you have the chance. 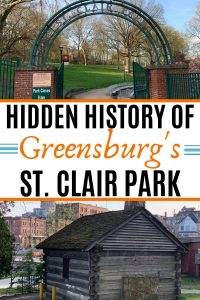 On that same side of Route 30, near the tipple are some coke ovens running adjacent to the road.

Are they still there? Where along 30?

Thank you, I’ve often wondered what that was...I never expected such an interesting story.