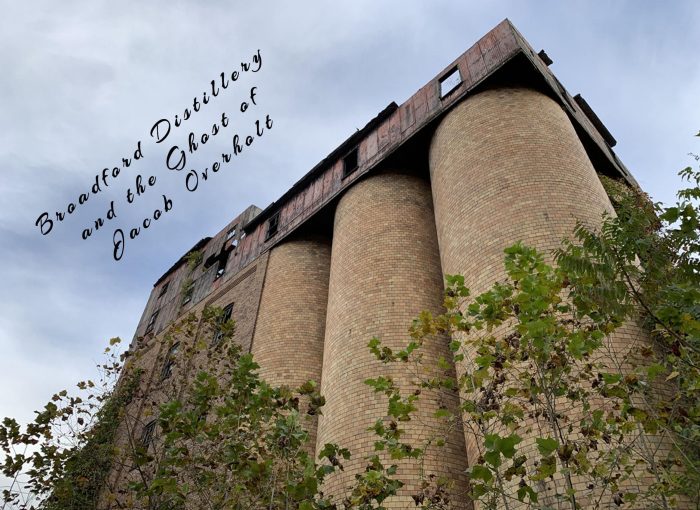 It seems that almost every building over 100 years old has a ghost story to go with it — particularly the abandoned ones. The Broad Ford Overholt Distillery near Connellsville is no different. In fact, its overgrown property and the ruins of the buildings makes it look like an extremely likely candidate for a ghost story!
This Broad Ford ghost story is based on a time-tried motive — money. Now, no one knows if this story is really true or not and it very well many be entirely urban legend but it adds to the intrigue of the site.
The story starts in 1854 when Jacob Overholt, son of Abraham Overholt, branches out onto his own whiskey-making endeavor at Broad Ford — just a few miles from West Overton Village. Jacob owned 2/3 of the operation at Broad Ford, making him the majority owner.
Two things are known for sure. Overholts were known to have very long lifespans and Abraham Overholt could have a temper — especially when it came to money. So when Jacob died in 1859 while he was only in his 40s, especially under unknown circumstances, rumors began to swirl.
People speculated that early one morning before any of the workers had gotten to the distillery, Jacob and Abraham had gotten into an argument over business matters. Things got out of hand and in the heat of the moment Abraham killed Jacob.
There is nothing to corroborate this story and information regarding Jacob and his death is sparse. Regardless of how Jacob died, what is true is the Abraham Overholt then bought out his son’s 2/3 share, adding Broad Ford to his own portfolio.
It wasn’t long after Jacob’s death that the worker’s began to report seeing a ghostly figure resembling Jacob who would wander the plant watching over them — just as he would if he were alive. Two major fires also started at the distillery, one in 1884 and one in 1905, and were said to be started by Jacob looking for revenge.
Over the years of Broad Ford distillery’s operation, the idea that the distillery was haunted persisted. Employees and visitors described unexplainable happenings, shadowy figures, and vanishing objects. Many say it is Jacob Overholt still walking the grounds looking for his father. 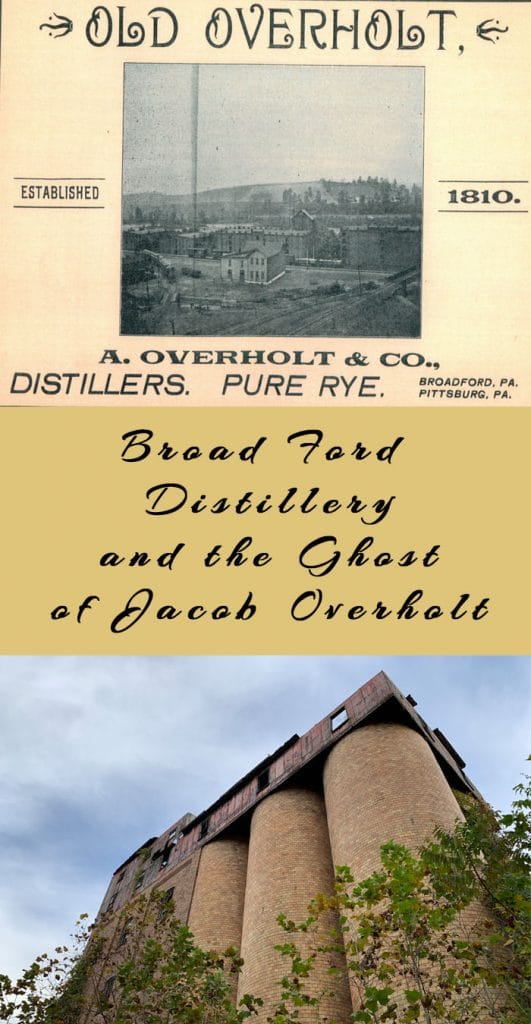 Ghosts or not, the story of Old Overholt Whiskey and Broad Ford Distillery is a fascinating one.
Check out this other fascinating ghost story from Westmoreland County…

This is going to sound crazy but listen up. There is a trail across the river from the distillery and the first time we walked on it, the person i was with got an extreme sense of deja vu. Second time we walked in it she got the same feeling and we both saw a floating white orb thing. This place has absolutely atrocious vibes.