Skip to Content
Did you know that the Old Overholt brand of whiskey is America’s oldest continually maintained brand of whiskey and it has it’s roots right here in Western Pennsylvania?
Recently, Ryan and I took a trip out to Scottdale’s historic West Overton Village which is the birthplace of Henry Clay Frick. It was also the homestead of Abraham Overholt, the owner of Overholt whiskey and one of Western Pennsylvania’s most famous distillers. 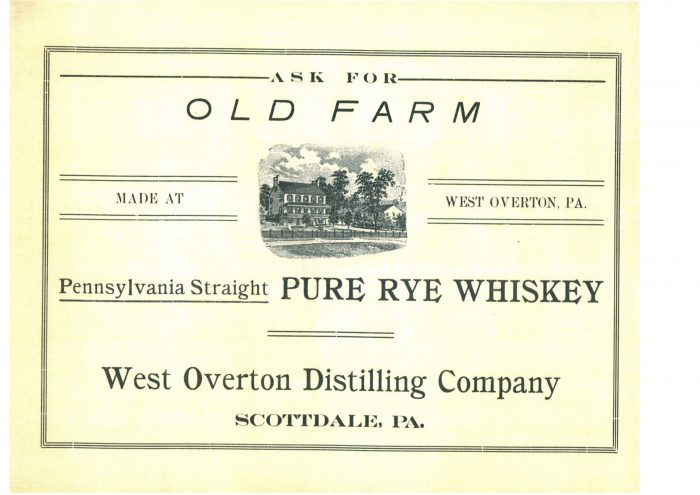 The Overholt’s history with whiskey actually starts with Abraham’s father, Henry, who started making rye whiskey in a log cabin at West Overton Village. His son Abraham took an interest in the practice and became so good at it that he made it into a business and started distilling Old Farm whiskey at West Overton.
In 1854, Abraham’s son Jacob, his brother, and a cousin branched out and opened their own manufacturing operation six miles away in Broad Ford. Located across the Youghiogheny River from Connellsville, this location was chosen because of its proximity to the new Pittsburgh and Connellsville Railway and the river which made it ideal for shipping purposes.
By 1859, Jacob Overholt was in his 40s and owned 2/3 of the Broad Ford operation. Sadly, he wouldn’t live to enjoy his prosperity as he died that same year. 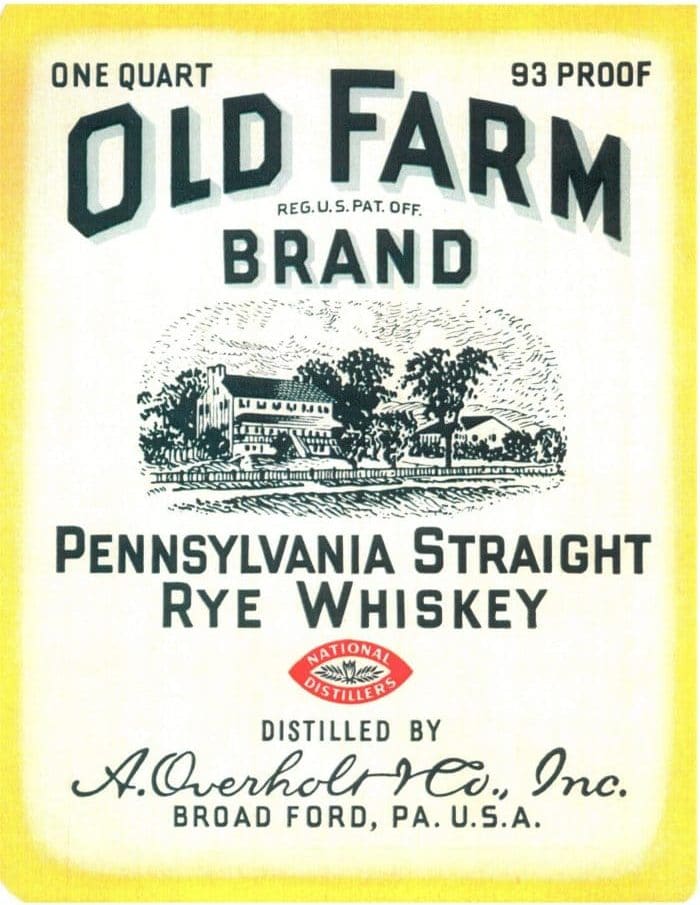 Abraham seized the opportunity to buy out Jacob’s 2/3, making Abraham the primary owner of the Overholt whiskey brands which he consolidated under the name A. Overholt & Company. Upon Abraham’s death in 1870, ownership of the companies was passed to Abraham’s grandson, Henry Clay Frick.
Read more about the ghost story surrounding Abraham Overholt, Jacob’s death, and the Broad Ford Distillery.
Up until that point, the name of the whiskey that was being produced at Broad Ford was called Monongahela Whiskey. Upon ownership transferring to Frick, he changed the name of Monongahela to Old Overholt and added the famous scowling picture of Abraham Overholt to the label.
This is when things started to get rocky for Broad Ford distillery.
The distillery experienced two serious fires when it was in operation, one in 1884 and one in 1905. The 1905 warehouse fire was potentially devastating if not for the quick thinking of the employees as well as the local fire department. Even still, 15,000 barrels of whiskey, or four months production, were destroyed.
Come the end of World War I, Prohibition was on the horizon. As if sensing a change in fortune was coming, Henry Clay Frick passed away in 1919 just before Prohibition was ratified in 1920. Frick’s holdings in Old Overholt were then passed to his friend and estate executor Andrew Mellon — thus ending the Overholt family ownership. 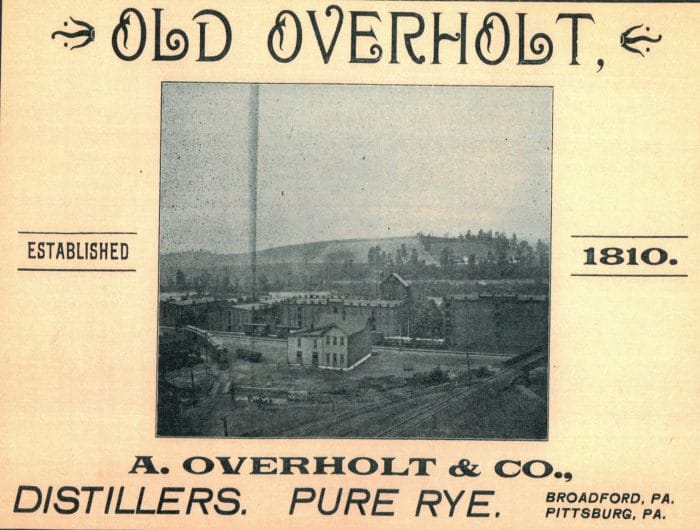 A view of the Broad Ford complex in vintage Old Overholt Whiskey advertising.

Old Overholt and Broad Ford were in a predicament with Prohibition. Most American breweries and distilleries were forced to close. However, and most likely because of the association with Andrew Mellon, Old Overholt was able to secure a permit to produce medicinal whiskey. This allowed Old Overholt to sell their existing stock to druggists for prescription use.
In 1921, Andrew Mellon was appointed Secretary of the Treasury and in 1925 under pressure sold his share of Old Overholt to an individual in New York, thus ending local ownership of the company. In 1932, the company was sold again to National Distillers Products Co. which had a portfolio of over 200 brands.

When Prohibition was repealed, the stills at Broad Ford were again fired up and production was increased. The recipe wasn’t quite the same as it was before Prohibition and it wasn’t quite the same as when the Overholt family produced it but it was still good (from what I hear.)
The distillery continued to make Old Overholt until 1951 when the still house was closed. The bottling lines and warehouse remained opened for another 4 years (while the whiskey aged) until 1955 when the property was sold. Eventually production of the brand was moved to the Jim Beam distillery in Kentucky where they continue to manufacture it. 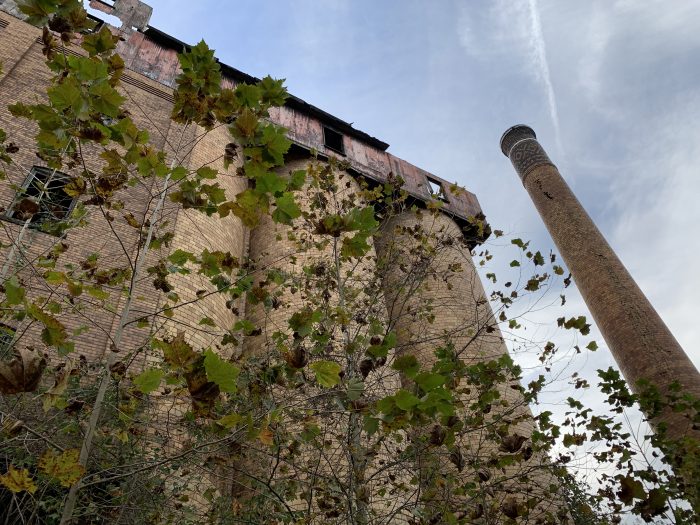 What the Broad Ford Distillery granary building and smoke stack look like today.

It didn’t take long for the Broad Ford site to start deteriorating. The swinging bridge which connected the Broad Ford plant to the worker’s homes across the river in Adelaide remained for a number of years before it too succumbed to nature, deteriorating, and falling into the river below.
This brings us to the state of the Broad Ford distillery today. Read on to see what this once-iconic distillery looks like more than 50 years after it closed.