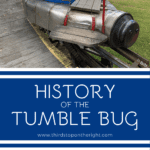 **Update: Sadly, I have to update this post to say that in the summer of 2021 Conneaut Lake Park lost their Tumble Bug when its mechanism was scrapped. The cars, however, were saved and apparently sold to a collector who has aspirations to rebuild the ride. I would love to again update this post to say that there are once again two working Tumble Bugs, but as of now, Kennywood has the only full-size, operating, Turtle left in the world.** 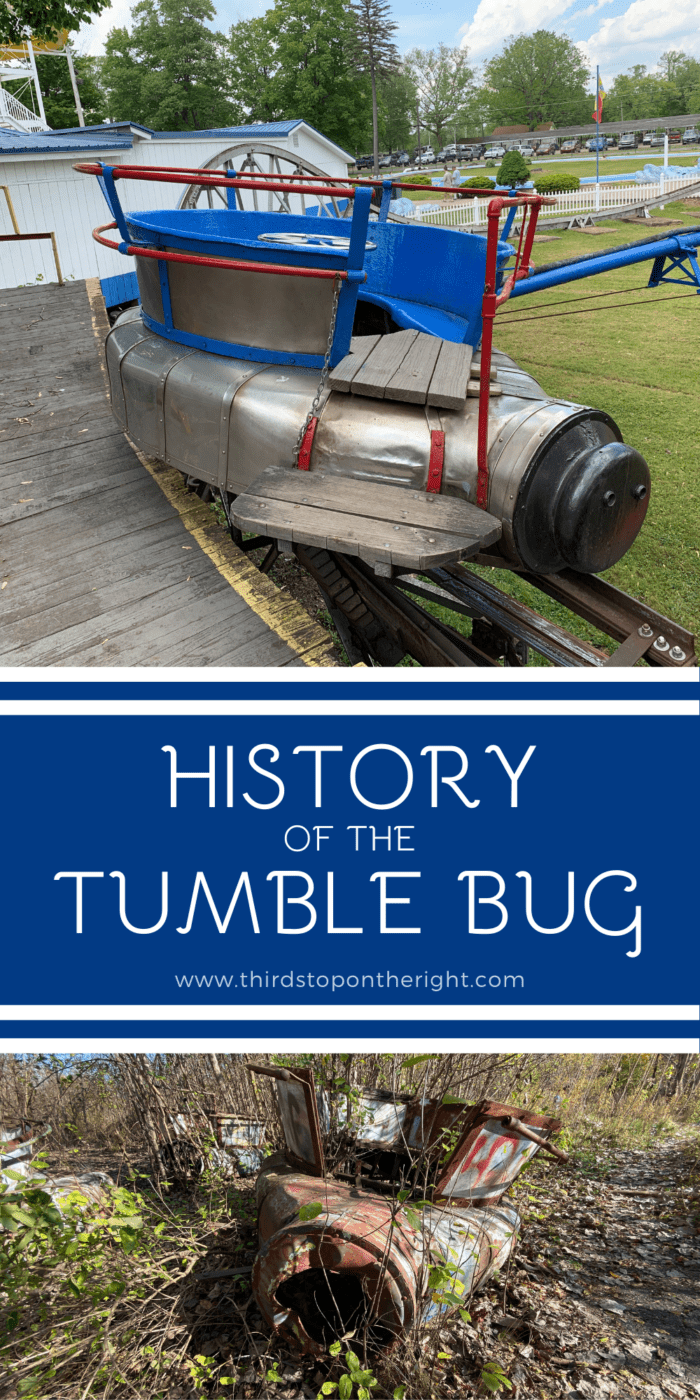 The Tumble Bug was once a staple of the amusement park midway. A classic flat ride, there were two variations that many parks had. One featured a sort of stubby “face” that looked like a bug, hence the Tumble Bug name. The other variation looked like a turtle and that ride is often referred to as the Turtle Ride. However, both operated exactly the same. 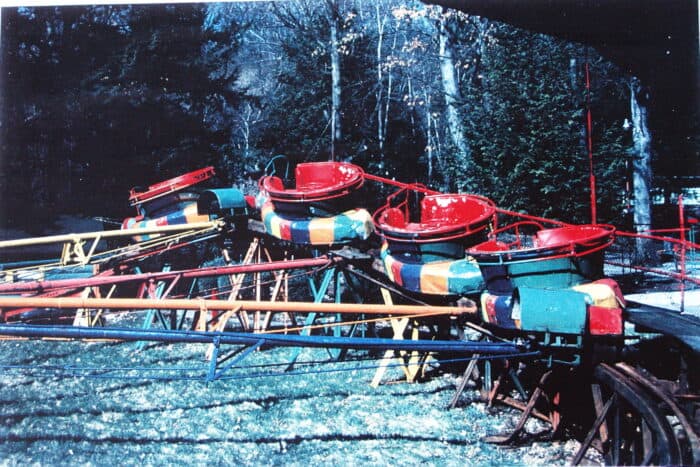 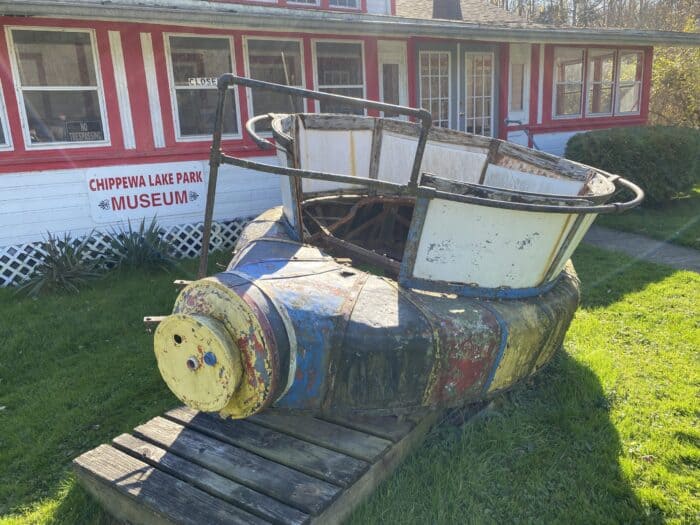 A salvaged Tumble Bug car from Chippewa Lake Park outside a small museum by the former park gates. Note the place for light bulbs where the eyes and nose are. Also, note the similarity to Conneaut Lake Park’s Tumble Bug cars.

According to the Ride Zone website, these rides were built by Traver Engineering of Beaver Falls, PA. Although Traver is often given credit for the ride’s design it was actually designed by Hyla Maynes, who also invented the Caterpillar. Traver had a license to produce the Tumble Bug ride but a royalty was paid to Maynes by the purchaser.

Traver Engineering produced the Tumble Bug into the early 1930s when the factory was taken over by one of Traver’s employees and began operating under the name R.E. Chambers. The factory continued producing the Bugs as well as spare parts for the rides. 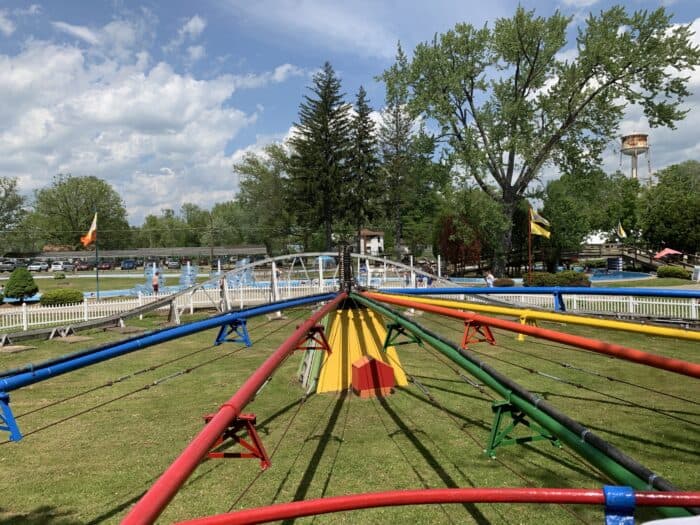 The Tumble Bug cars were connected to a central pivot point by rods and the cars themselves were propelled by motors between the cars. (Conneaut Lake Park Tumble Bug)

The Bug traveled around a circular undulating track, usually in a counter-clockwise rotation. The track has changes in elevation and the cars are each attached to a rod on a central pivot point. The cars are connected and are propelled around the track via motors between the cars.

Now, here is the bad news. 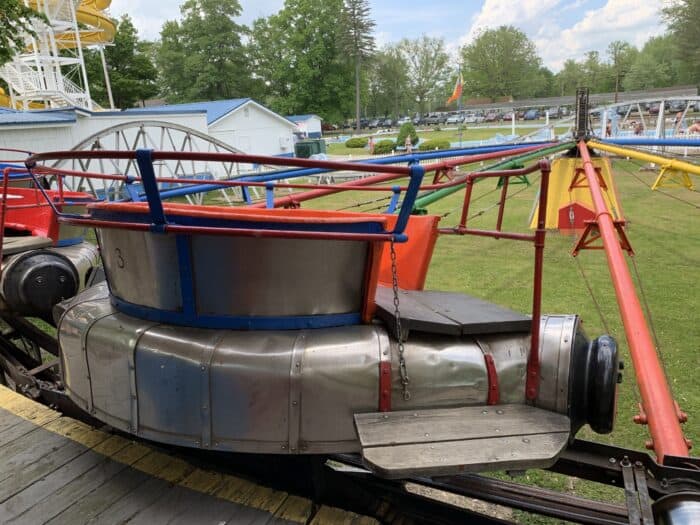 Only three Tumble Bugs still stand here in the United States and only two still operate. The two that operate are the Turtle at Kennywood Park in Pittsburgh and the Tumble Bug at Conneaut Lake Park near Meadeville. The third is at Chippewea Lake Park in Medina, Ohio but has been abandoned for more than 40 years.

I feel lucky enough to have seen and/or ridden all of them.

Its been a couple of years since I’ve been to Kennywood Park so unfortunately I don’t have any updated pictures of the Turtle Ride, but I’m hoping to get some soon. 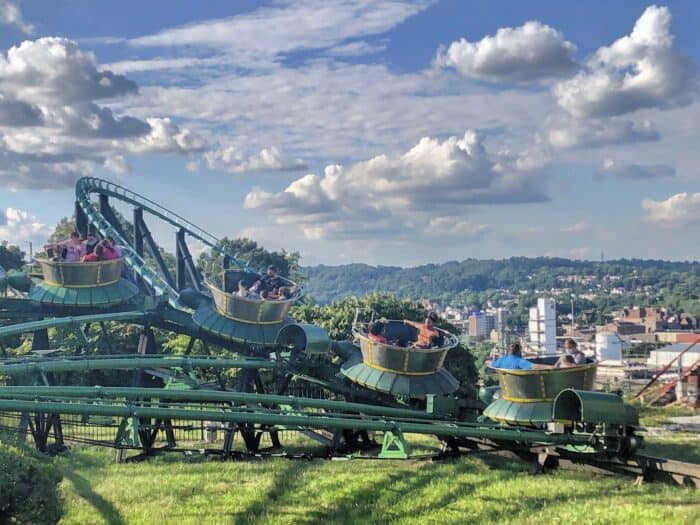 The Turtle Ride climbing one of the hills at Kennywood Park’s ride. The individual motors at the back of the cars can be observed. (photo courtesy of Kennywood Park)

Kennywood’s model is a six-car model and features skirting around the cars, turtle feet, a turtle tail, and a turtle head. It is also painted in a turtle motif.

It’s not a secret that Conneaut Lake Park has had a rough go of it. It’s also not a secret that I’m rooting for the park if only just because of their number of history rides. The fact that they have the last functioning Tumble Bug model in the United States doesn’t hurt either. I was at Conneaut in 2019 was able to ride the Tumble Bug. I was impressed that they did a lot to clean up the ride, including giving the Bug a fresh coat of paint. 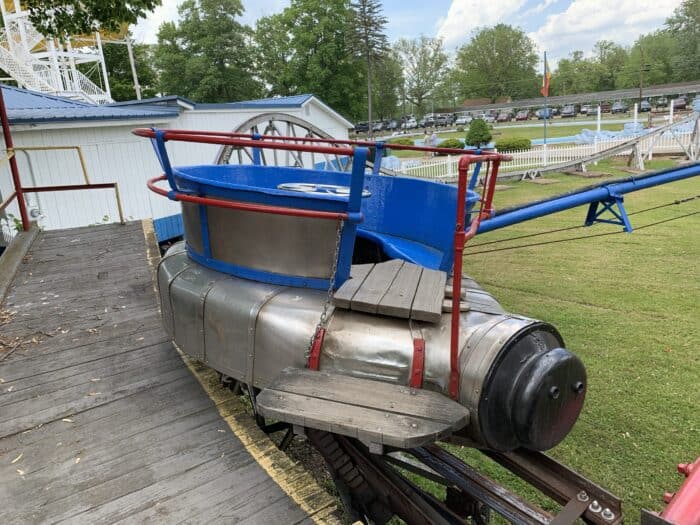 The Conneaut Lake Park Tumble Bug. Where the eyes are located is actually light sockets that once held light bulbs.

Conneaut’s Tumble Bug is a 5-car model and was installed in 1925. It now features a blue, red, and silver paint job with the signature stubby face and eyes. At one point, light bulbs filled the eye sockets to light up the eyes. 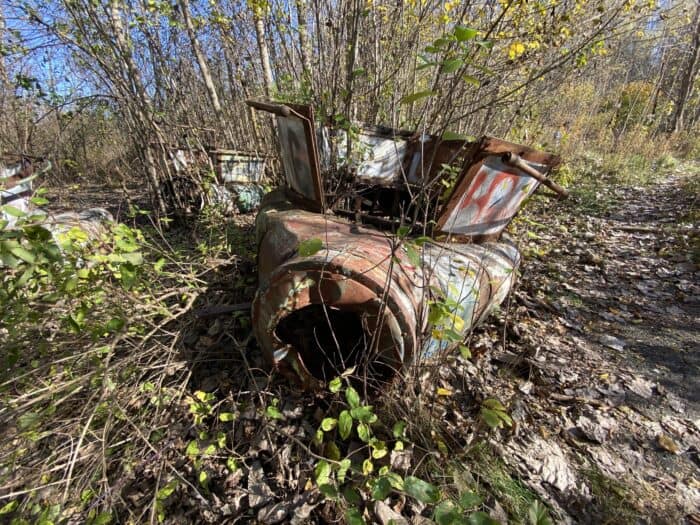 This Tumble Bug car is missing its face but at one time it too had places for light bulbs and featured a multi-colored paint job.

There is one other Tumble Bug that is still standing, although its days of being operational are long over. Deep in the woods of Ohio lie the remains of Chippewa Lake Park and its Tumble Bug. 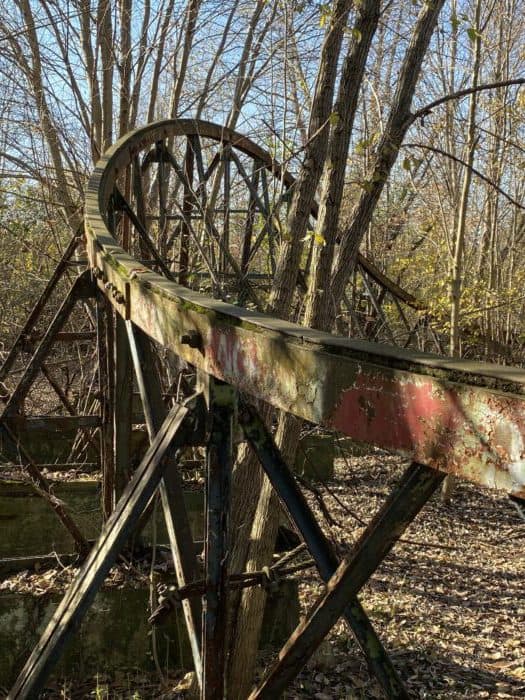 One of the elevated segments of the Tumble Bug track rises high above the ground in the woods, abandoned for more than 40 years.

This was a four-car model and up until just a few years ago the cars were still on the track and connected to their central pivot point. 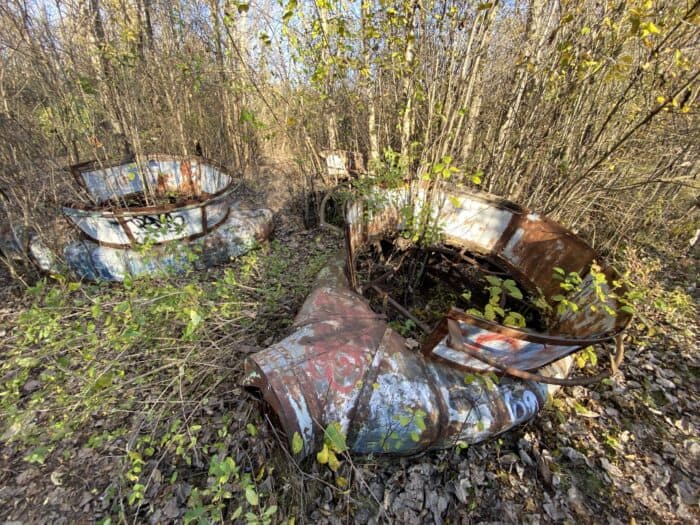 Three abandoned Tumble Bug cars sit abandoned in the woods. They have only recently been removed from the track.

Recently, the cars were removed from the track. One of the cars was moved to a small museum outside the gate of the former park while the remaining three are still in the woods alongside the ride. It is reported that Medina County has bought the former park and plans to preserve the remnants of the former rides. Let’s hope that happens because this ride is too unique to lose.

There were several Turtle/Tumble Bug rides in the Western Pennsylvania area in the amusement park heyday. Some of the parks that had these rides included West View Park and Cascade Park.

If you find yourself in the vicinity of Conneaut Lake Park or Kennywood Park and have the opportunity to ride the Tumble Bug or the Turtle Ride, I highly suggest doing so before they someday disappear.