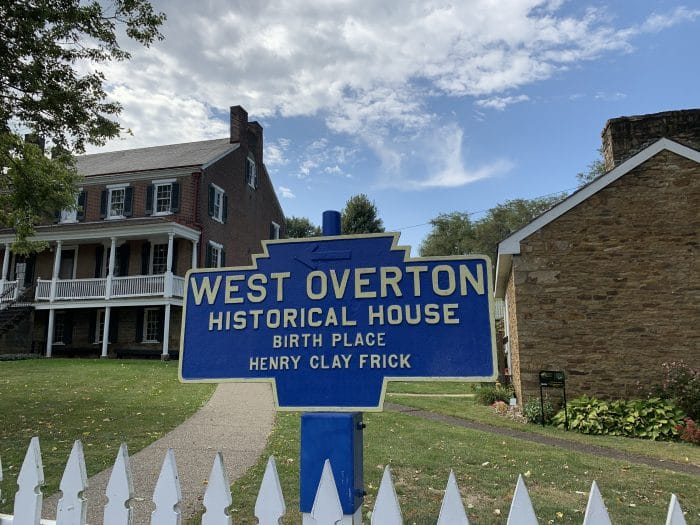 West Overton was founded by Henry Overholt in the early 1800s but it was his son Abraham Overholt that took the Overholt farm from a traditional German Mennonite farm to a self-sufficient community centered around an on-site whiskey distillery.

Built in approximately 1855, the hay barn was used for storing grain. The “X” shaped holes helped to ventilate the space and keep the hay and grain from rotting or catching fire.

Even though Abraham Overholt made a name for his family in his own right, perhaps an even more notable event at West Overton Village was the birth of Abraham’s grandson, Henry Clay Frick — one of Western Pennsylvania’s greatest industrialists.

Frick eventually rose to fame through his holdings in the coal and coke industry and an eventual partnership with Andrew Carnegie and the Carnegie Steel Company. (To read more about how this partnership became a bitter feud I highly recommend reading the book Meet You In Hell.)

A Visit to West Overton Village

I actually experienced West Overton Village through a meeting for Westmoreland County nonprofits about a year ago. I was interested in delving more into the history of the place, so Ryan and I took a trip out one Saturday.

When you arrive at West Overton Village your experience starts in the old distillery. Although not the original location of where whiskey was distilled, this was Overton’s first official distillery. The front of the building has the words “West Overton Distilling Co.” and the brands slogan “Pure Rye Whiskey” on it.

The History of the Overholt Family

Despite the fact that the family made its fortune in whiskey, the museum isn’t primarily focused on distilling but more on the life and times of the family.

The Overholt homestead has been preserved, along with about 20 other buildings on the property (although these are not open to the public), and tours are offered every hour. The house was built in 1843 by Abraham Overhold and on the tour you can view the lower two floors of the home.

A scene depicting General Braddock’s death and General Washington getting his horse shot out from under him.

One interesting room to note was the Parlor Room. While it was originally designed for hosting parties and receiving guests, when Helen Frick purchased the home she commissioned a large mural depicting Westmoreland County’s role in the American Revolution be installed in the room. It depicts familiar locals such as Hannastown and Bushy Run.

The springhouse where Henry Clay Frick was born can be seen on the left.

Another area of particular note is the springhouse located adjacent to the main house. You see, Henry Clay Frick’s coming to be was a bit scandalous. John Frick worked at the distillery and asked Abraham Overholt for permission to marry his daughter, Elizabeth. Now, John only made about $100 a year as a laborer and Abraham frankly thought his daughter could do better.

Until Elizabeth found out she was pregnant. Then, Abraham changed his mind.

John and Elizabeth moved into the springhouse where they had their daughter Maria. It was also the birthplace of Henry Clay Frick on December 19, 1849.

This barn is now used as a wedding reception venue. It was built in the 1840s and is said to be the largest in Pennsylvania.

As I said before, there are over 20 buildings on the property, all with fascinating histories. This includes the home the Frick family moved to after the springhouse, a barn said to be the largest in Pennsylvania, the store where Henry Clay Frick got his start clerking, and a hay barn.

At one point there were more than 50 buildings in the village and more than 200 people called it home. The worker house on the right was the the childhood home of Henry Clay Frick and the other was another example of the houses that once stood in this industrial town.

This house was the home of Abraham’s oldest son, Henry Stauffer Overholt. Henry and Abraham planned out the village together and managed the farm and distillery. Henry ended up dying the same year as Abraham in 1870.

This house was built in 1854 by the Overholts and was occupied by Christian Stauffer Overholt, Abraham’s other son. Christian lived on one side of the structure and ran his general store on the other side. He was known for his lavish spending, one time spending $77 on curtains for his home when the average worker paid $50 for a year’s rent.

Prohibition severely impacted Overholt Distillery and although the company was still allowed to produce token amounts for government medicinal purposes, production eventually ceased. West Overton Village remained dry until this year when the stills were dusted off (no, they aren’t really the originals) and whiskey distilling resumed. While its a work in progress, the museum is hoping to start doing tastings and offering whiskey for sale soon.