If you know me and you know my blog you know that I love discovering the hidden history of locations that we know and love. Especially if those histories are hiding right under our noses. This is the case of Killarney Park which eventually became Camp Christian, a Christian summer camp.

The entrance to Camp Christian as it looks today.

I’ve been familiar with Camp Christian pretty much since I was born. My maternal grandparents Howard and Nessie Cornman were heavily involved in the camp and spent many, many hours working there. I have very early memories of going to day camps there and my Nannie as well as my mom being one of the counselors.

Years went by and eventually I started going to overnight camp at Camp Christian. I knew the camp had at one point had something to do with the railroad and that the main building, the Millhouse, had a railroad bell out front, but I wasn’t quite sure what the connection was.

Little did I know that eventually my roots and my passion would collide. 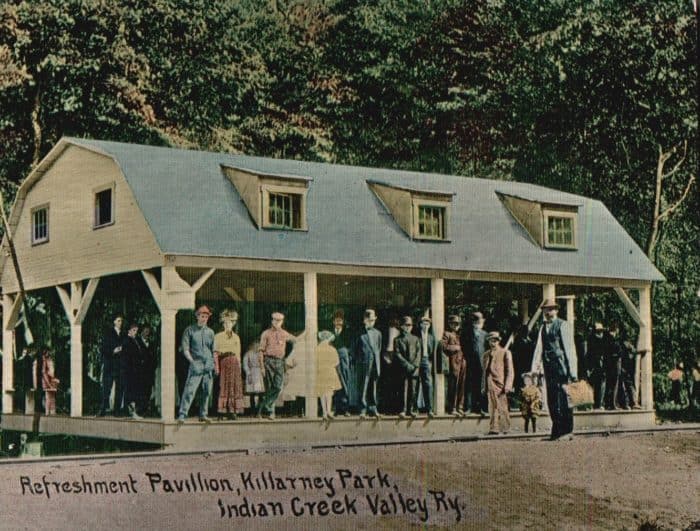 The Killarney Park refreshment stand was located right along the railroad tracks.

For this story to make sense we have to go back to the turn of the century. Camp Christian wasn’t always Camp Christian. In fact it was founded in 1906 when F.B. Livingston sold a piece of land to the Indian Creek Valley Railroad Company. 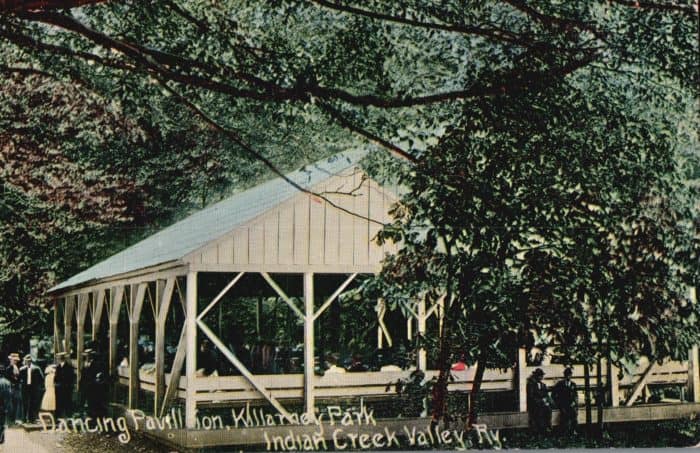 Eventually a dance hall was added to Killarney Park which was an attraction for locals.

Eventually a park with a dance hall, picnic area, two lakes for boating, and overnight accommodations come to fruition in 1909 and was name Killarney Park. 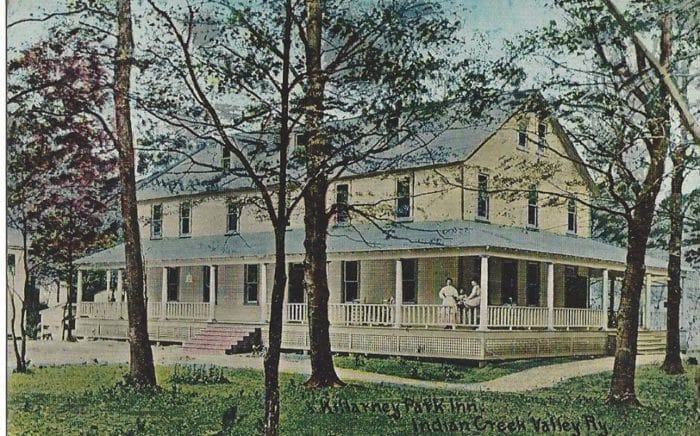 The oldest building at Camp Christian until 2001 was the Mill House, also known as the Killarney Park Inn.

The Mill House, which was the oldest building on the property (until it was demolished in 2001), was built in 1901 and served as a dining hall as well as a hotel for guests.  It was said that the park would serve as high as 3,000 guests in a weekend, with the specialty being homemade ice cream.

The park was a success and became a popular place for Pittsburgh residents to get away from the city. The railroad went through the park and would have as many as thirteen coaches in one train.

In 1926 the Baltimore and Ohio Railroad bought the park and leased it to a Jewish organization which named the park “Camp Red Feather.” It was also known as “Penn Mountains.”

From Killarney Park to Camp Christian 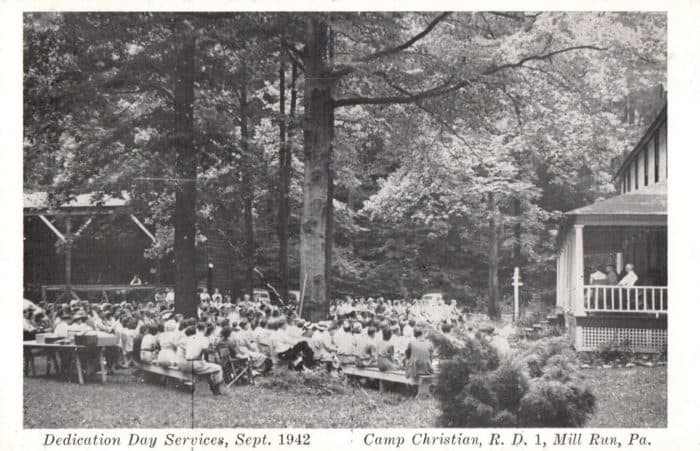 The dedication of Camp Christian took place in September of 1942. The old Mill House can be seen on the far right hand side.

In 1941, the Baltimore and Ohio Railroad made the decision to sell the Killarney Park property to the Christian Church of Somerset in order to start a summer camp. It was again renamed, this time to “Camp Christian.” At that time there were very few options for church camps and it was hoped that by purchasing the park it would provide a place of worship and education for Christian youth.

Even though the camp was dedicated in 1942, many things have still stayed the same. I was lucky enough to come across a group of postcards on EBay showing Camp Christian in its early days. Despite these cards being over 75 years old, many things that are shown in them are still around in the camp. 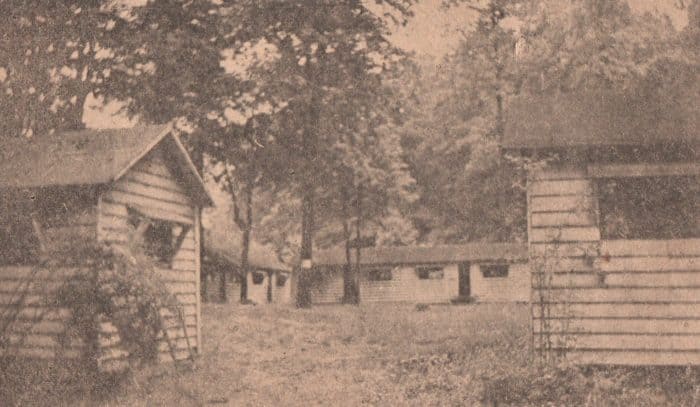 In this postcard the original cabins can be seen in a semicircle.

I remember 20 years ago when I attended camp, some of the parents said that they remembered the old cabins which used to be in a semicircle. At one time, you used to be able to see the foundations of the cabins that were in a semicircle, but now the stones have either been removed or have been grown over. All of the cabins were given names based on the 12 tribes of Israel. There is one building with three of the original cabins left. 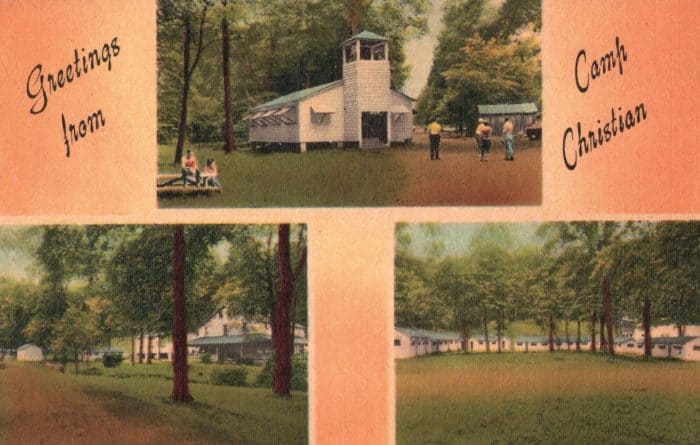 Views of the original chapel, mill house, and cabins.

The original chapel has also been replaced. The original white chapel was located near the semicircle of cabins, but was eventually torn down and relocated across the drive from the dorm. 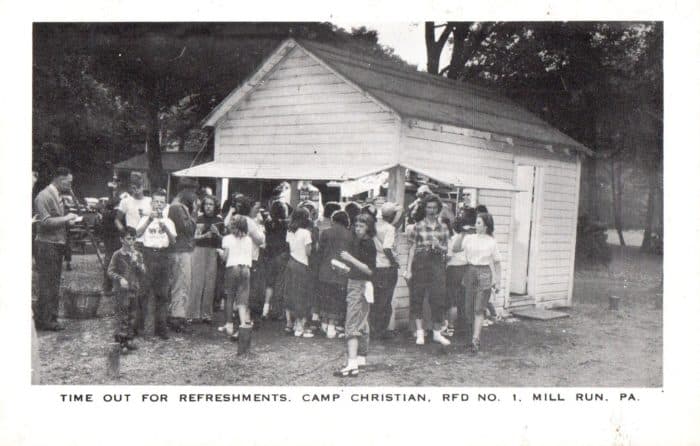 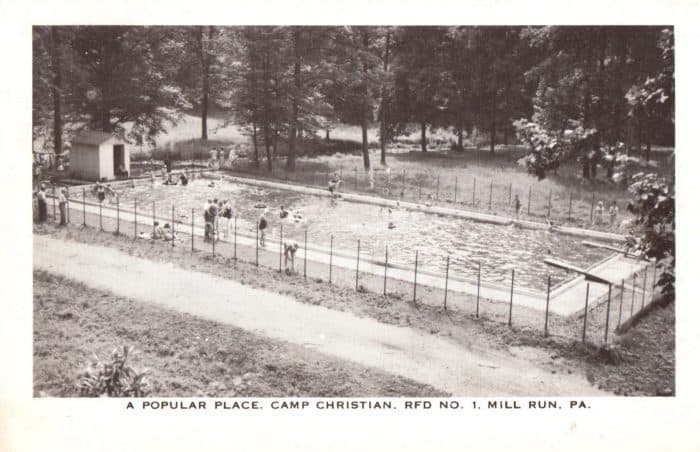 The pool has pretty much remained unchanged. I am sure that much maintenance has been done on the pool over the years, but the location and shape have not changed. Actually, if you look very closely, on the far end of the pool in the original picture is a smaller kiddie pool. In the middle of the pool is a pillar made of stone. In the modern-day picture the kiddie pool is no longer there, but the pillar remains between the two picnic tables. While I haven’t been in this pool in probably 20 years, I am guessing that the water temperature hasn’t changed either and it is absolutely freezing!

On a recent trip to Ohiopyle, I decided to make a quick detour to Camp Christian so I could visit the camp that meant to much to me.

One of my favorite parks of the camp was the chapel in the woods. Although it isn’t much of an actual chapel and I remember it being way more “in the woods” when I was younger, it is still an interesting place to go and reflect. Set back from the main camp, tucked in a barrier of rhododendrons is a stone pulpit with wooden benches. I remember going to this place for evening vespers back when I went to camp.

As I was leaving I made sure to stop at the entrance sign which my grandfather built many years ago. Although my grandfather is no longer around he would be glad to know that the sign he so loving built is still welcoming new generations of campers to the camp he cared so much about. 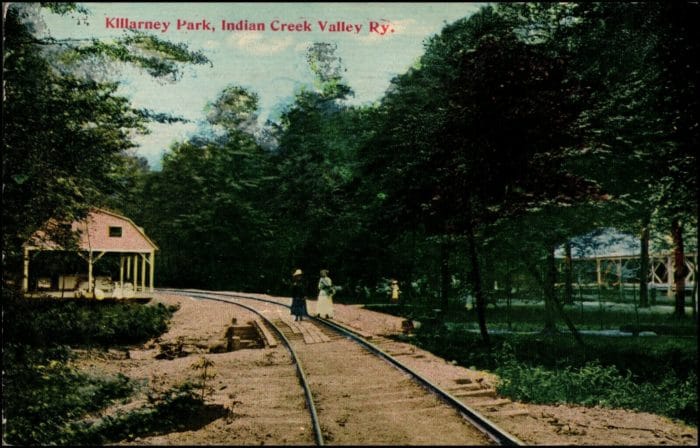 In this image you can see the Mill House to the right, but on the left hand side, right under the white snack building, are the stone remains of the old railroad bridge which still remain in the park to this day.

As for Killarney Park? Very few remnants of the old park remain, but if you look closely you can find them.

That stone railroad bridge? Can you can find it in the original pictures? And the address for Camp Christian? It’s located on Killarney Road.

Do You Love Amusement Park History?

I loved the old pictures of my beloved Camp Christian as i spent many summers there. I hated to leave and wait another year to see my friends again. I slept in every one of those cabins and loved the smell of the woods in the morning walking to the Mill house for breakfast. I loved the sound of the bell ringing, which i did myself on many occasions! Sitting on the wooden rocking chairs on the porch was so relaxing after a good meal! May i add my Aunt Peg (Margaret Saylor was the camp cook.) My uncle Harry Saylor did a lot of the electrical work there as well. Many times i would sit on the back porch of the Mill house on my free time eating ice cream with my aunt. I played that old piano many times in the chapel for services! I even got baptized in the swimming pool! My best friends mom was the nurse many summers there! i loved the flag raising in the morning and running to get my card to get goodies at the snack shop. Going on the "hike" with a boy was the highlight of the week! I'm sure my initials are carved in a cabin beam or wooden bench at Vesper rock somewhere! Many hot and sticky summer days we played softball at the field! I will always have these fond memories tucked in my heart forever! THANKS AUNT PEG AND BRYN MAWR CHURCH FOR THAT!

This is great! Thank you for posting.

Your grandparents were amazing people. They meant the world to my family, and the fruits of their hard work can still be seen at camp!