After a recent visit to Laurel Caverns in Uniontown, I was on my way home when I passed by Shady Grove Road in Lemont Furnace. Now in my research into lost amusement parks I knew that there was an abandoned park in Uniontown and this park just happened to be called Shady Grove, so this piqued my abandoned spidey senses and I decided to take a drive down that road. Lo and behold, tucked away on a back road bordering train tracks, I hit gold. I saw the remains of a concrete swimming pool and some boarded up buildings and I knew that I had found it. It might be difficult to tell now, but this was the remains of the former Shady Grove amusement park. 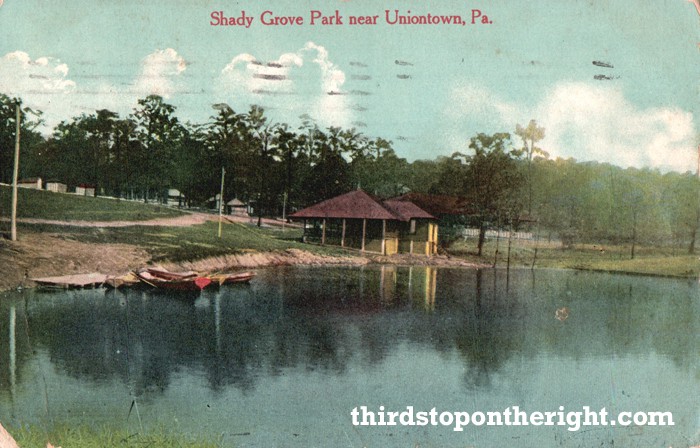 The artificial lake a Shady Grove Park was used for swimming and boating. Amusement buildings can be seen on the hill behind the lake.

Shady Grove opened as a trolley park in 1905 and serviced the West Penn Railways streetcar line. It was originally a picnic grove and landscaped wooded area. A small artificial lake allowed for boating and swimming. The lake was accompanied by a dance pavilion. 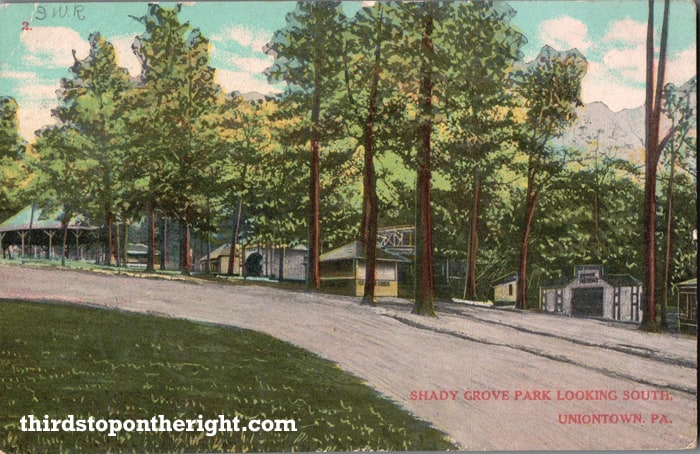 Leading up the hill from the lake were various amusements including a photo gallery, a fun house, and a theater. The roller coaster can be seen in the background of this image.

By 1908 amusements had begun showing up in the park including a Ferris wheel, a fun house which was referred to as the “House of Mirth”, a theater, a photo gallery, a restaurant, and two large dance halls. 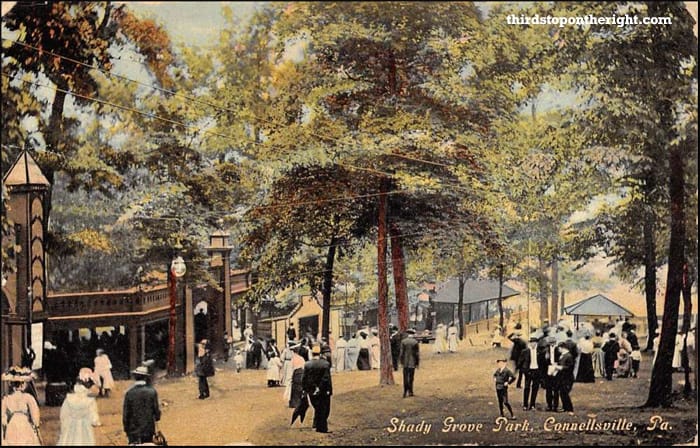 This image shows the midway of Shady Grove amusement park looking down the hill. The entrance to the Wildcat rollercoaster is at the top left. 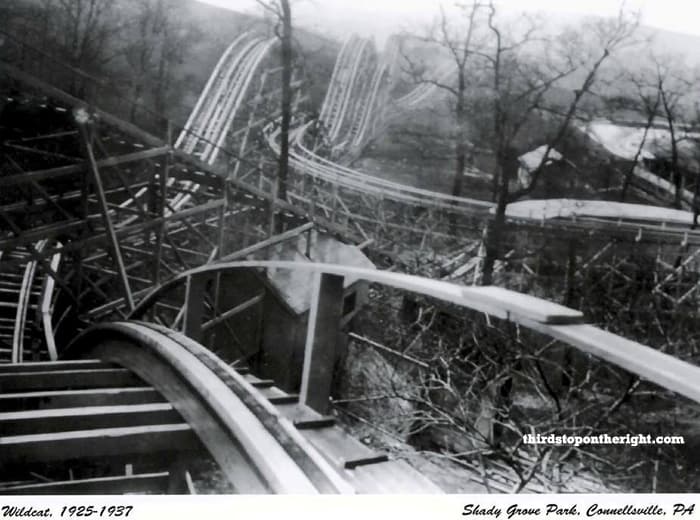 The Wildcat rollercoaster, designed by Traver Engineering, was unlike anything Fayette County had ever seen before.

In 1925, a huge roller coast called the Wildcat was built. This coaster was unlike anything Fayette County had seen before. Designed by Traver Engineering of Beaver Falls, it twisted and turned as it spread across most of the park. 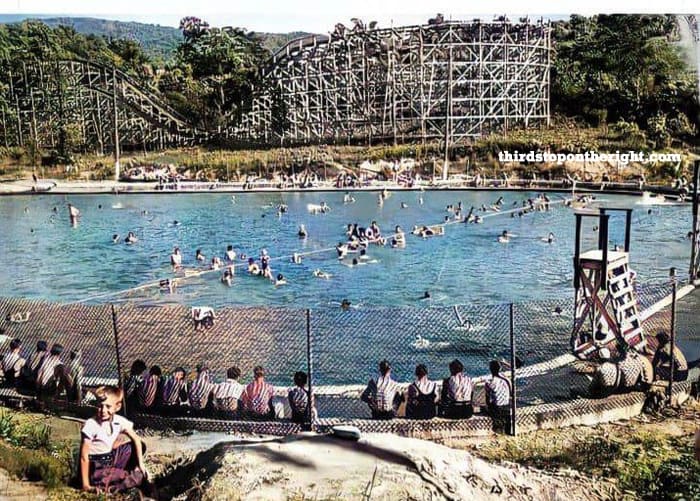 The new concrete swimming pool at Shady Grove with the Wildcat rollercoaster in the background.

A concrete pool replaced the lake in the early 1930s.

Fires had always been a problem at the park, mainly from cigarettes carelessly dropped by patrons. These small fires would usually be extinguished quickly and without damage. However, the threat of fire was always looming as an enemy of the early amusement parks and Shady Grove was no exception. 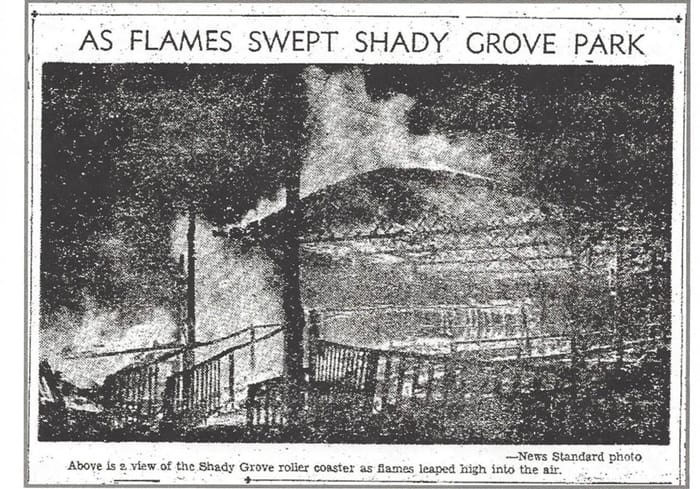 On May 1, 1937, flames from what was reportedly a purposely set fire swept through the park. The fire destroyed the roller coaster and a good many buildings. 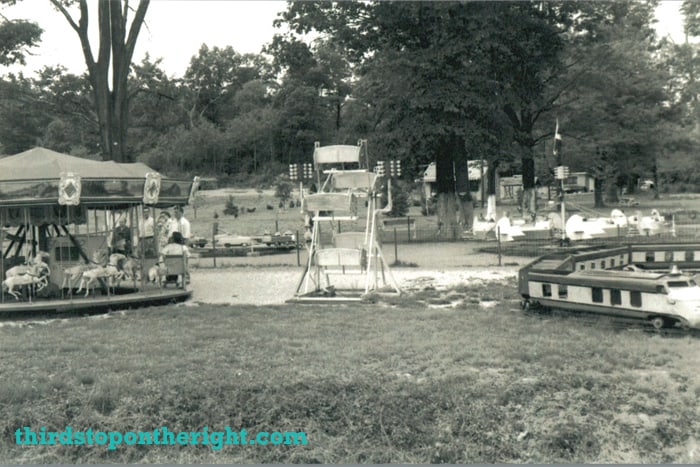 Some of the kiddie rides that were once at Shady Grove.

Despite the fire, the Shady Grove was able to recover, although the roller coaster was never rebuilt. However, other rides were added including a rollerskating rink, aeroplane swing, merry-go-round, and kiddie versions of the adult rides.

In the 1970s a decision was made to remove the rides, leaving only the large swimming pool. 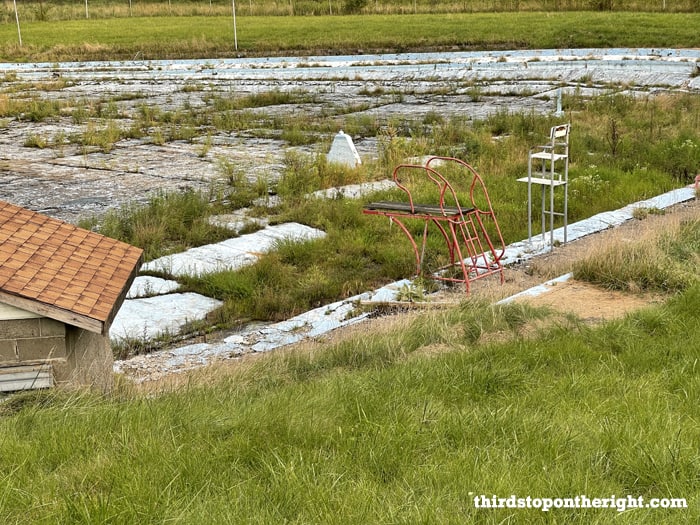 A diving platform and lifeguard chair at the old Shady Grove pool. 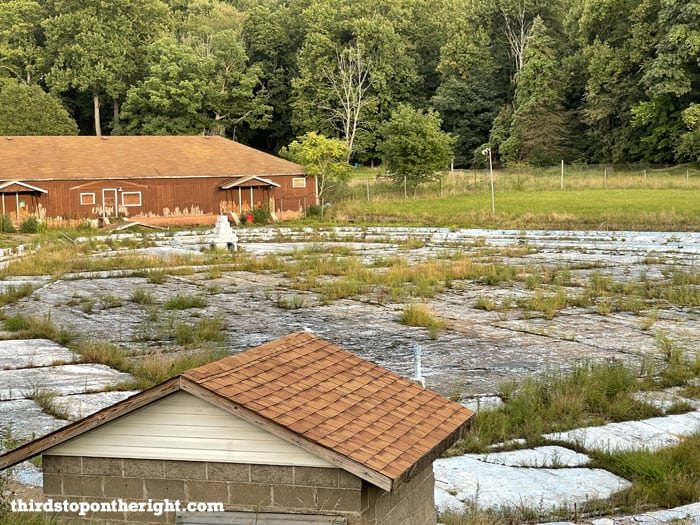 An old fountain can be seen in the remains of the pool. 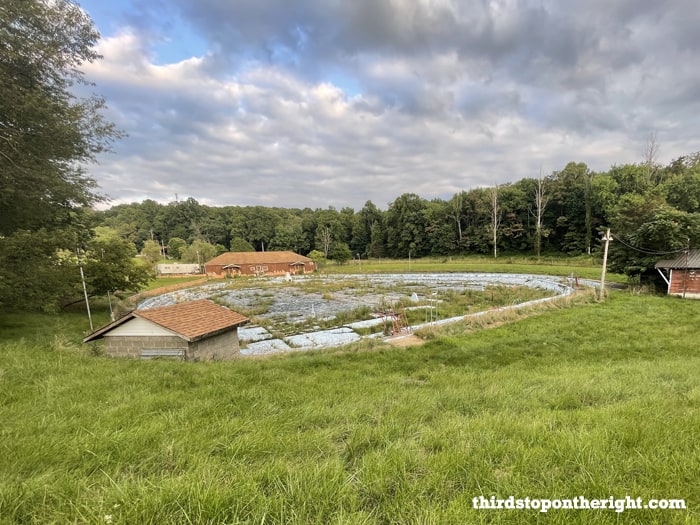 The grassy area behind the pool was once the area where the Wildcat twisted and turned.

Eventually the pool also succumbed to agenda changing safety regulations. In 2012 the pool was drained and shuttered for good. Reportedly, concrete footers from former rides can still be found in the wooded areas adjacent to the maintained grassy areas. Could these possibly be from the Wildcat?

It’s a shame these amusement parks with there fantastic histories are being slowly lost to time. Now only photos and a few physical remains serve as reminders of Shady Grove’s past as a thriving amusement park.

I had a Aunt that lived near the park. When visiting her, we went to the park. I remember riding the Ferris Wheel. It was not a very large one. Later in life I went to a couple of family reunions at the pavilion, there.

Back in the days when those postcards were produced things weren't as technical as they are now regarding municipalities, etc.

Used to go there on Sundays for polka bands. Also went to the pool during the week.

I went swimming at Shady Grove in the late '50s and early 60's. I remember how large the pool was and the fountain that was in the middle. I'm fairly sure I also remember the ankle 'bracelets' that had a metal disk and a key with the number of the locker you used. We held one family reunion there around 2010 or 2011 before it closed for good.