Skip to Content
At first glance, the North Park water tower appears to be a looming column of rusting steel. Looks, however, can be deceiving. This tower holds a fantastic secret that no one but a select few have seen in almost 50 years. 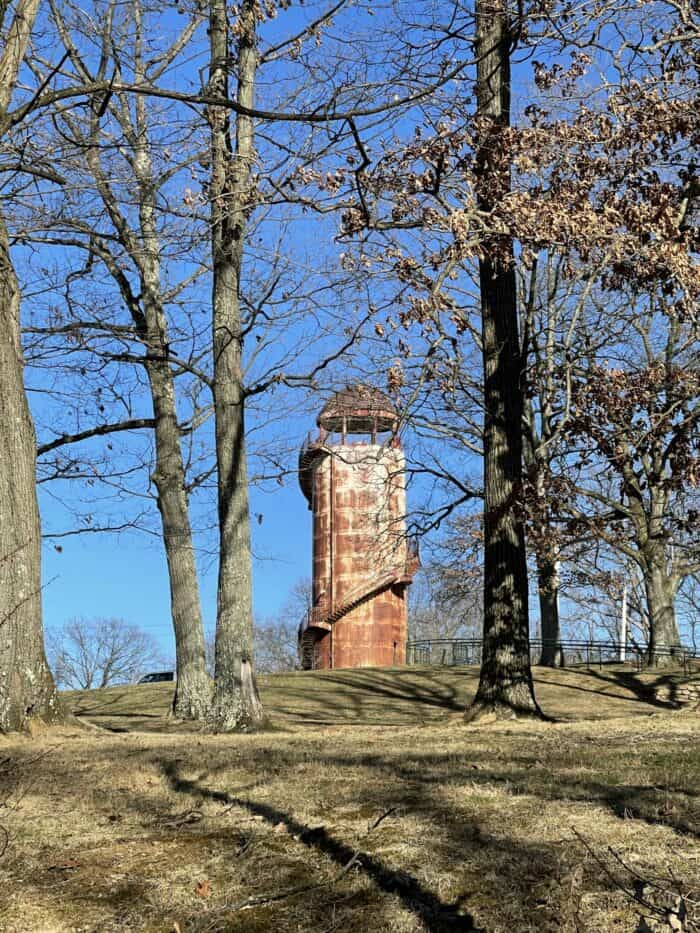 Although imposing in and of itself, the North Park Water Tower holds a fantastic secret.

Built in 1937, Pittsburgh’s North Park Water Tower, officially known as the North Park Stand Tower, was built as a water supply system and holds 300,000 gallons of water. The tower itself is 101 feet tall, and the observation deck at the top is at an elevation of 1,361. A staircase spiraling around the tower accesses the deck.

Now, for the best part.

When the tower was built it wasn’t just built as a water tower with a basic observation deck. But, in a nod to astronomy, the designers of the tower added a terrazzo floor with astrological symbols and a large compass surrounding a circular bench. 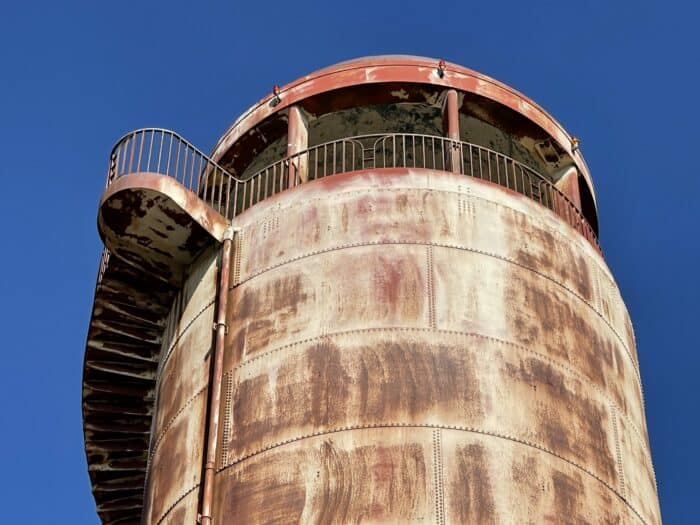 101 feet in the air is an observation deck. Unfortunately, the deck has been closed to the public since the mid-1970s because repairs need to be made to the steps. You can see the blue faded paint on the ceiling of the dome from the ground. However, what you can’t see from the ground is pretty fantastic.

The problem with the observation deck is that it isn’t available for viewing. The water tower has been closed to the public since the 1970s because of the deterioration of the structure. Don’t try bypassing the locked entryway marked “NO TRESPASSING” or you could very well end up getting arrested.

When I found out about these terrazzo floors the first thing that came to my mind was our drone. I was curious if the drone could get pictures of the floor.

On the day of our visit is was pretty windy so we weren’t sure how flying the drone would go. Luckily, we were able to get the drone up and to the top of the water tower. It was a bit difficult because of some of the strong winds but when we looked at the photos I was beyond excited. 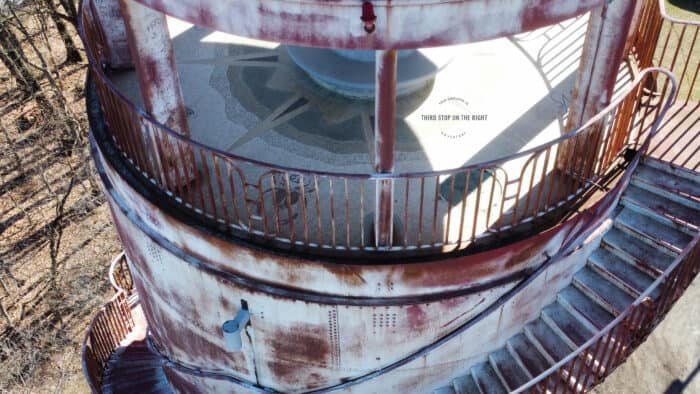 On the far right you can see the cardinal North directional symbol in a circle. To the left of the North symbol is a crab, the astrological symbol for Cancer. 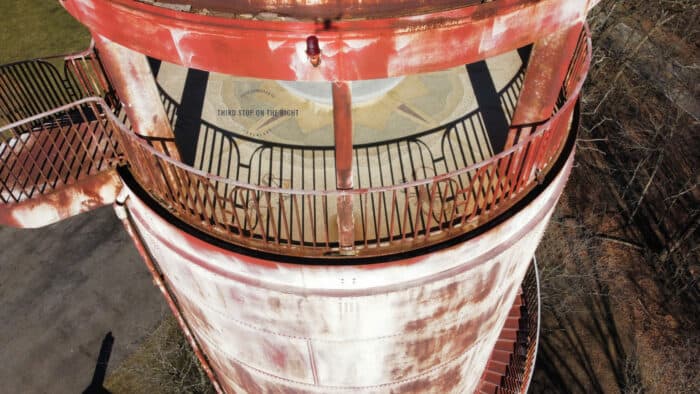 On the right is a scorpion which is the symbol for Scorpio and on the left is a scales symbol which is Libra.

When I found out about the terrazzo floors in the tower I was able to find photos of the tile compass and the cardinal direction North symbol. However, when I looked at the photos I realized that there were also astrological pictures and symbols on the floor as well. Such an exciting find! 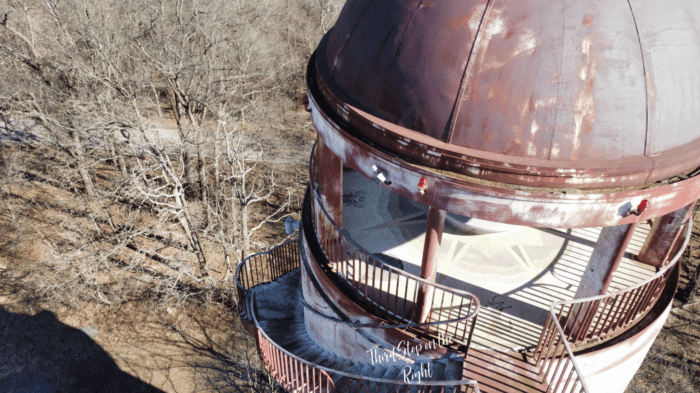 Based on the image as well as the symbol I believe this depicts Capricorn. It is a little difficult to tell, however, because of the lighting. 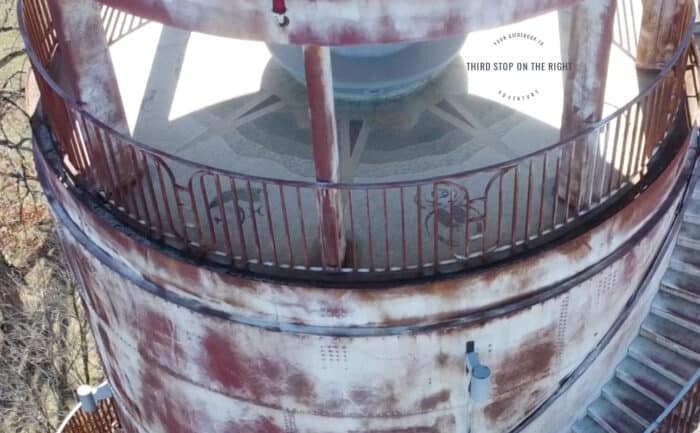 This image shows another angle of Cancer as well as the symbol for Pisces.

I was able to identify all of the images but one, and not all of the symbols are represented, so I can’t figure it out from that. The ones I could identify were Cancer, Pisces, Leo, Scorpio, Libra, and Capricorn. There is one last image that I am unable to identify, but I have been able to deduce that since the artist has omitted any of the astrological symbols using people that the missing one is either Taurus or Aries. 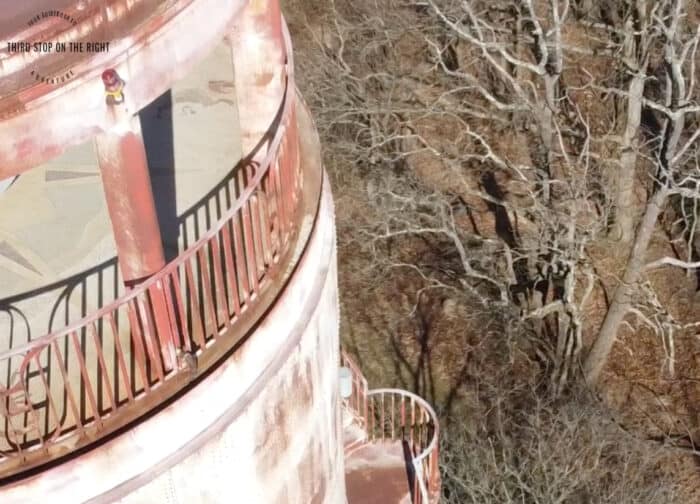 In the upper corner of the observation deck you can just see a little bit of Leo.

The Future of the Water Tower

I am looking forward to going back on a less windy day and trying to get better images of the astrological symbols. It’s exciting because these are images I haven’t seen anywhere else.

Efforts have been made in the past ten years to restore the North Park Water Tower. The tower is said to be structurally sound, but the stairs need repaired and the surface repainted. 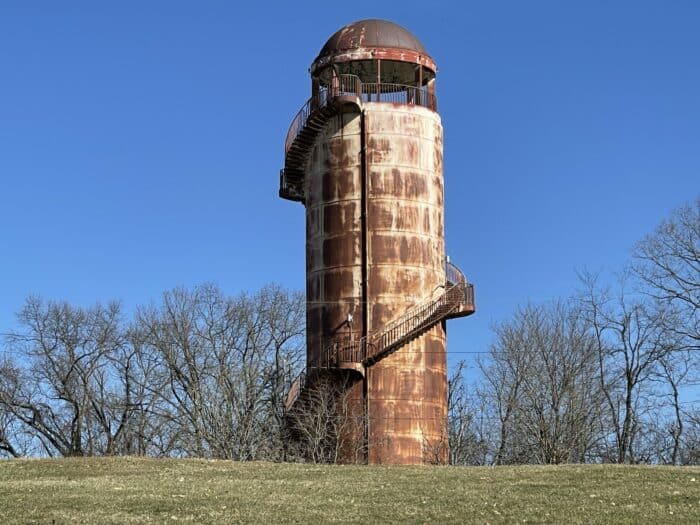 In 2010, Dreamworks donated $10,000 to Allegheny County to restore the observation deck’s floor. The repairs were necessary to complete scenes for the film “I Am Number Four.” However, nothing has been done since then.

I would love to one day be able to see the floors in person so I hope to eventually see the preservation efforts take off. In the meantime, I’ll keep using the drone to try and get better pictures.

Great to see. Somewhere on that mass of rusting steel are my initials carved in a heart!

Amazing video and pictures. I remember being up there over 50yrs ago, and had forgotten about the floor. Would be great if refurbishment could be accomplished.