It’s a local historic landmark that invokes strong emotions throughout the community. In 2018, Ligonier Beach swimming pool closed after a catastrophic flood and has since sat empty, its future in limbo. It was recently purchased by Ligonier Township and was opened to the public which gave me a unique opportunity to explore the property. 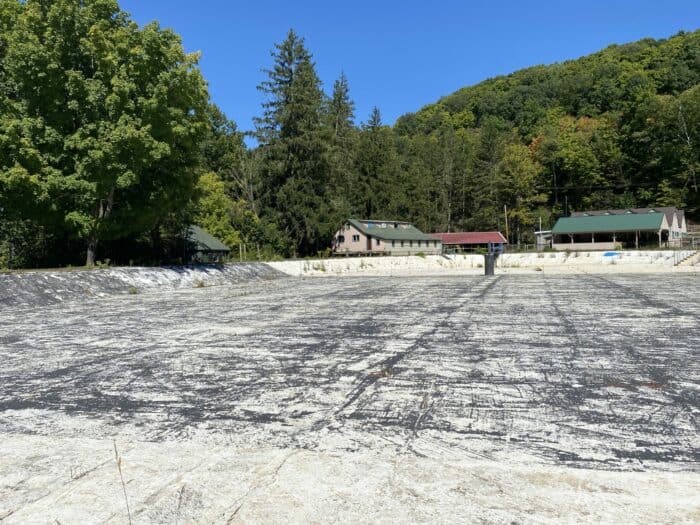 A view of the empty Ligonier Beach swimming pool. The diving platform is in the center of the picture. 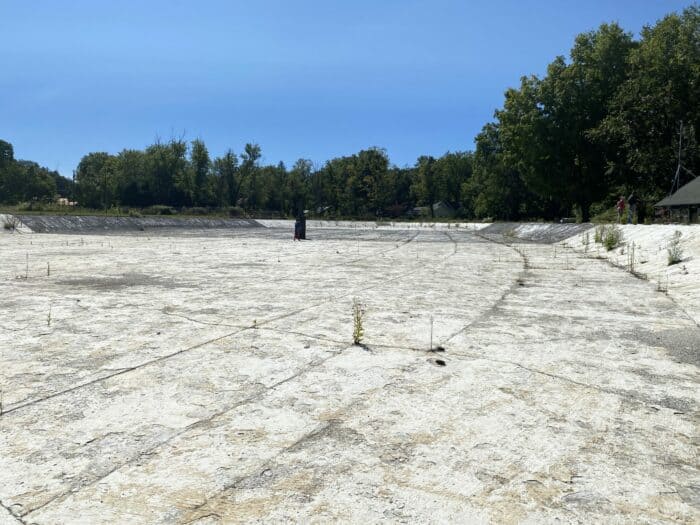 Another view of the empty pool. Note the cylindrical column which is where the fountain once was.

The pool property is marked “no trespassing” but on this day the township opened it to the public. I’ve obviously learned the hard way what happens when you put things off for another day so I jumped at this chance. What drew me in was the empty shell of the swimming pool, particularly the area of the old diving platform. 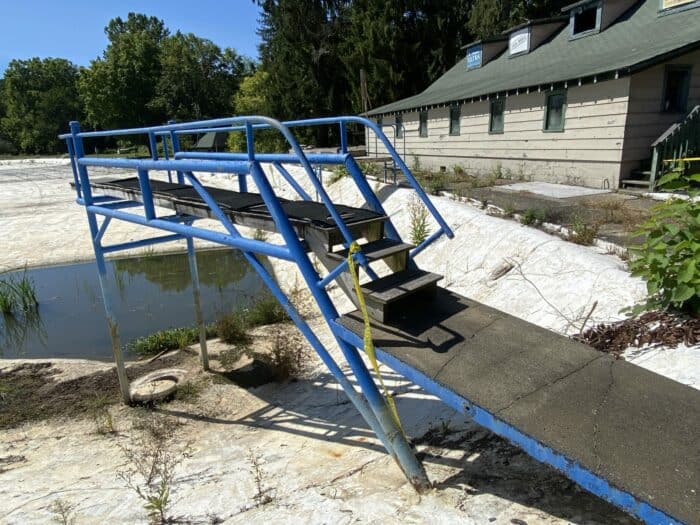 While the rest of the pool was completely drained a small square (which apparently is 9 feet deep) at the far end of the pool by the restaurant near the diving platform is still filled with water. Cattails stick out of the murky water so you can’t see how truly deep the area is. Who knows what else is at the bottom? 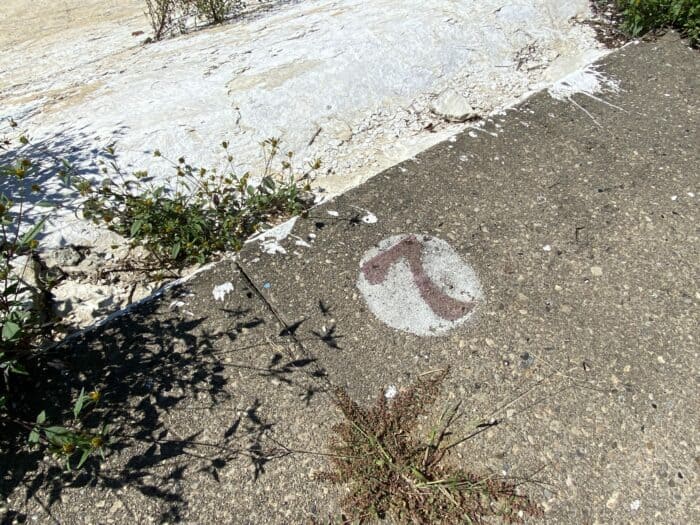 A depth marker painted onto the pavement beside the diving platform. 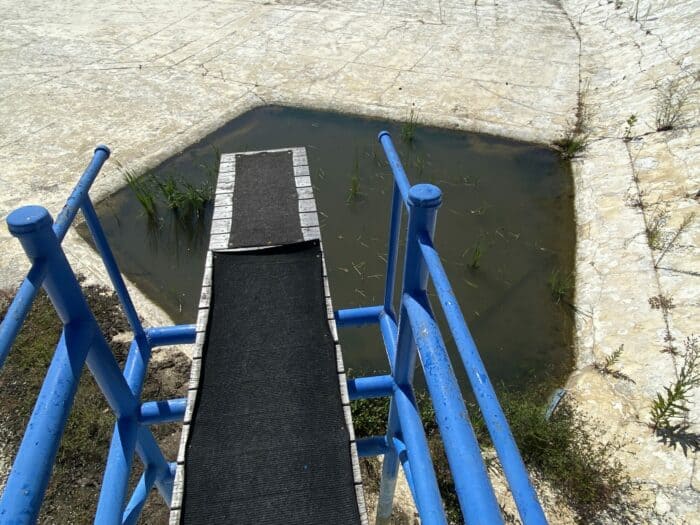 A look down from the diving platform into the 9-foot-deep section which was still filled with water. Cattails stuck out of the water and who knows what lurked beneath.

The diving platform, still painted bright blue, looms above the square. It’s hard to imagine now, but at one time hundreds of kids used this platform for diving. 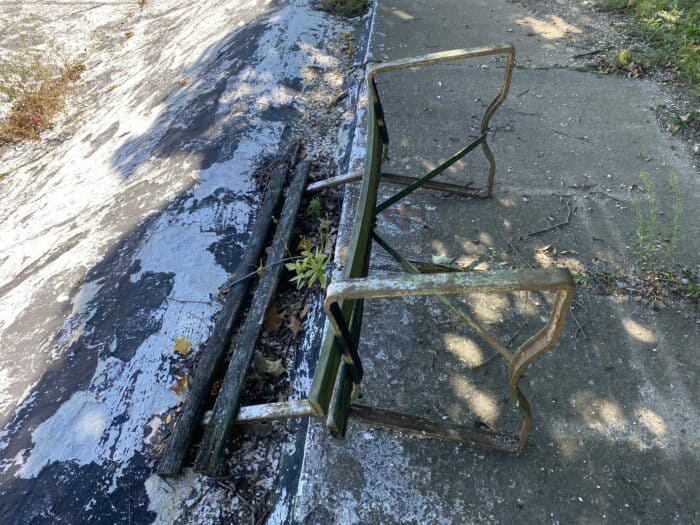 A bench is overturned along the walkway around the pool.

As you continue moving through the expanse of the empty pool you find remnants of summers gone by. The rails to climb out of the pool still remain, although now odd looking, as do a set of steps. A large canister-shaped object rises from the center of the pool which once served as a fountain. 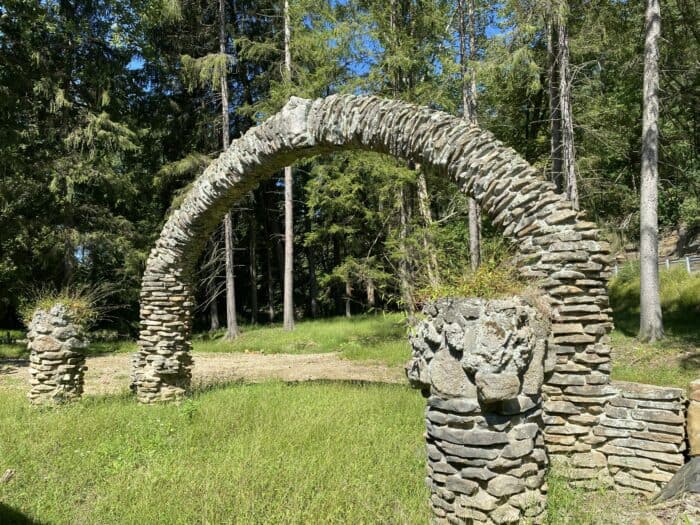 A stone arch marks what was once the cabana and entertainment area.

Another area of Ligonier Beach that I found interesting is the stone arch which once served as an entertainment area. In fact it was where a young pool boy by the name of Dean Martin performed. 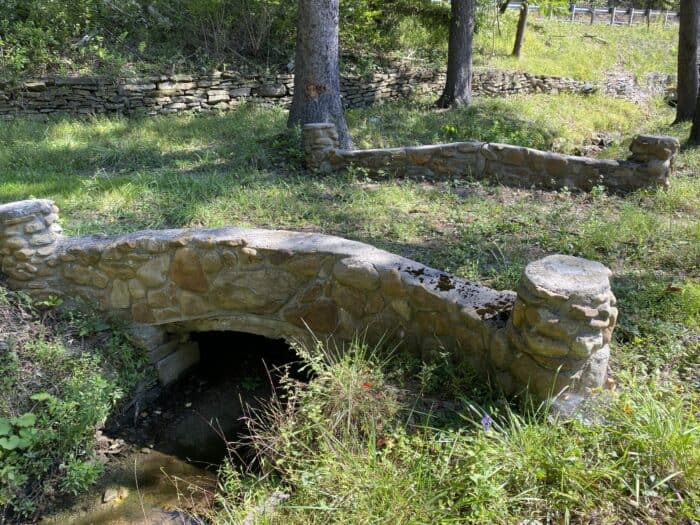 A stone bridge crosses the Loyalhanna.

While the area is rather run down now, the stone arch is still impressive, as well as a small stone bridge and stone walls. I was impressed with the craftsmanship with the stonework.

Another interesting element of the pool is the artisan well which is used to fill the pool. One of the things people remember the most about the Ligonier Beach pool was the ice cold water. That ice water came from that well. Although the pump house is now quiet, it at one time was the lifeblood of the pool, pumping the water from the well into the pool. 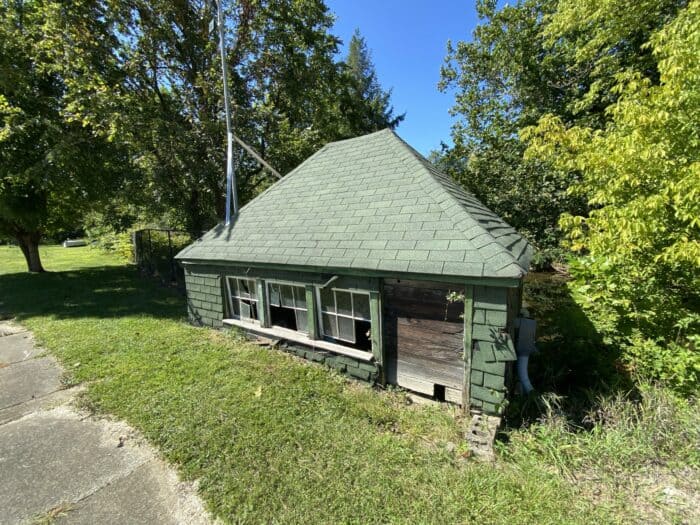 The pump house the supplied the ice cold water that filled the pool. 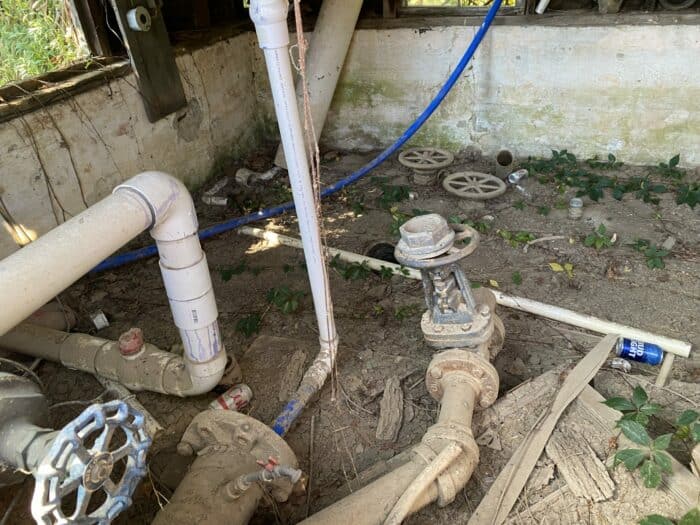 A view of the inside of the pump house. You can see the mud covering everything from the flooding.

Speaking of the pump house, seeing it up close it was pretty obvious how flooding was such a problem. The Loyalhanna Creek, which runs right behind the pump houses almost level with the pump house, not leaving much forgiveness for flooding. 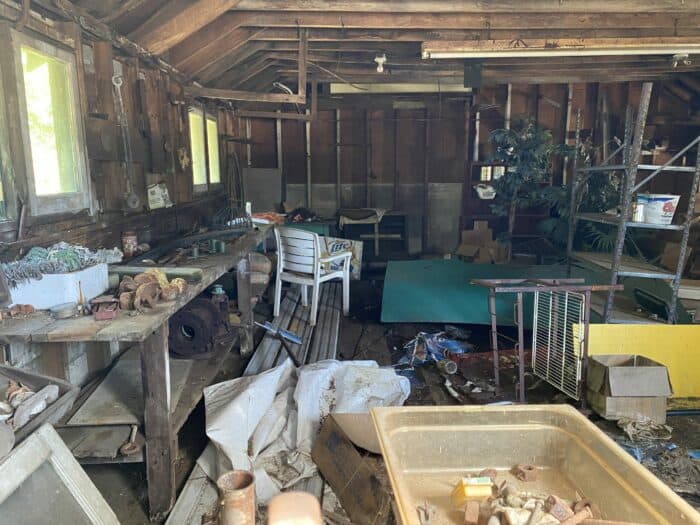 One of the buildings right next to the diving platform appears to have been used for storage.

There are three buildings left on the property as well. One appears to have been used for storage. Looking through the broken windows, it is full of a lot of junk and even missing flooring. The other two buildings consisted of a bar and restaurant (which was the site of an arson) as well as a changing and bath house.

The Township is currently trying to determine what the future of Ligonier Beach will be. Since it is a historic landmark, many residents would like to see the Township, or other entity, to take over the property and restore the pool to its former glory. Of course, this is what I would like to see as well. These large, concrete, public pools are going the way of drive-ins — they are slowly disappearing. Iconic pools such as Ivyside, Blue Spruce, Rainbow Gardens, and Blue Dell are all remnants of the past. Hopefully, Ligonier Beach.

Love Ligonier Beach? Check out these other famous pools of the past!

As a child my parents took me to Blue Dell. In the early 70s we moved to the mountains and Ligionier Beach was our swimming pool. That went on until they closed. A lot of memories....I truly hope that it gets restored.