For almost 150 years, Chippewa Lake Park has occupied a place along Chippewa Lake in Ohio’s Medina County. However, after 100 years of operating, in 1978 the park closed its gates for the last time, never to open again. Now, all that remains are the ghostly remains of a one-thriving park. 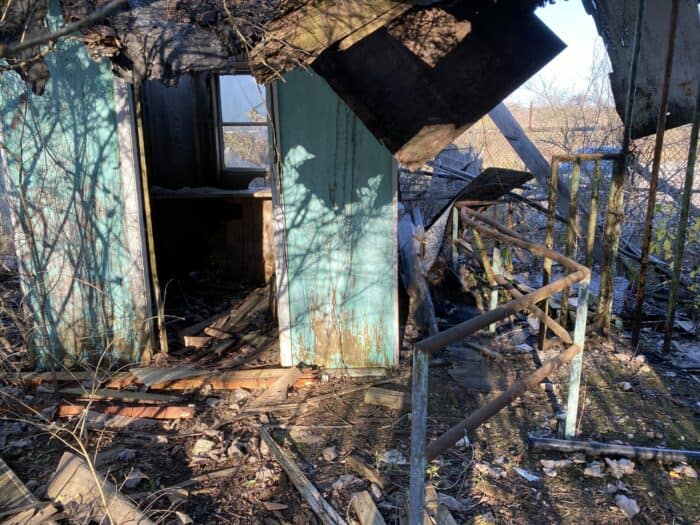 The former ticket booths of Chippewa used to greet guests but now are silent.

Several months ago I decided to take a road trip to see the old park for myself. I must admit, this trip was primarily fueled by the knowledge that Chippewa was home to one of the last three remaining Tumble Bugs — and I had to see it. I had seen (and ridden) Kennywood’s Turtle and Conneaut Lake Park’s Tumble Bug so this would make my collection complete. 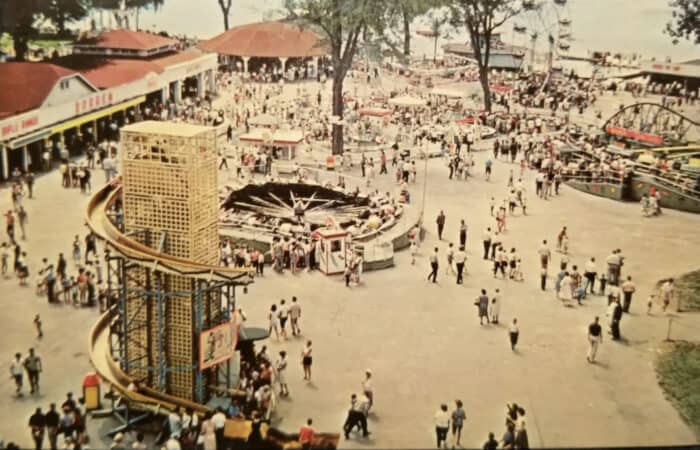 In this vintage postcard of Chippewa Lake Park when it was in operation, the Caterpillar is visible to the left, with The Bug and Ferris wheel to the right. The Flying Cages and Little Dipper would have been to the far left and are not pictured.

The former midway and location of the former Big Dipper roller coaster is visible directly behind the fence when you arrive at the old park. To your right are the broken-down ticket booths. In the park’s heyday, on the hill above the ticket booths was the ballroom. The ballroom was a park staple and remained a fixture in the closed park until 2002 when it was destroyed by an arson fire. The fire was so all-consuming that now all that remains is a twisted pile of steel and sheet metal. 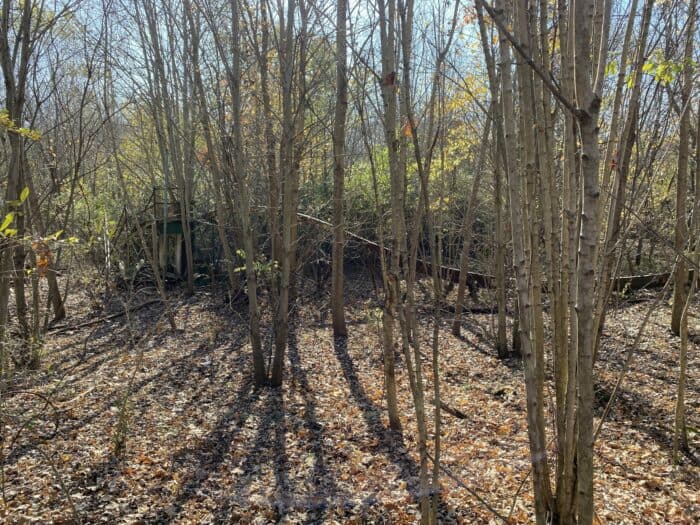 Appearing in the woods was the former Tumble Bug ride. I’ll admit that this is the main reason I had come to the park.

Just down the path was what I had come there for. As the midway curved around, winding toward the lake it sort of appeared like an apparition over a hillside. When I saw the large of the arced track I knew that I had found the Tumble Bug. I had seen pictures of The Bug (which coincidentally was the actual name of the ride when it was in operation) both when the park was in operation and in various states of abandonment so I knew how the ride had been situated. Alright, I admit, I was like a kid on Christmas morning. 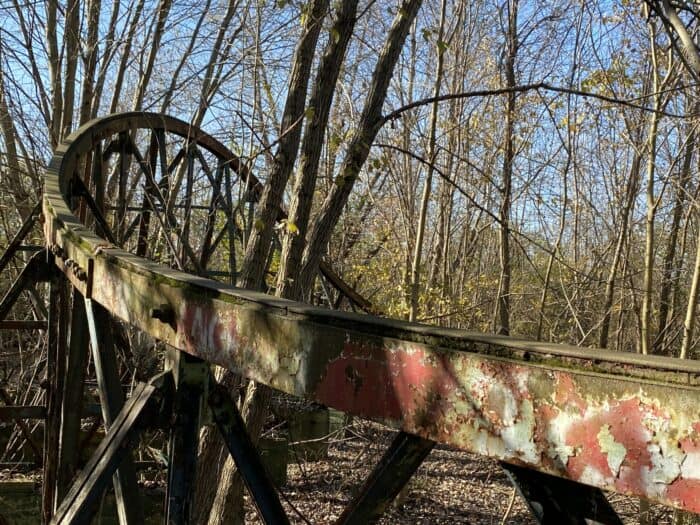 The graceful curve of one of the highest hills of the Tumble Bug.

The track, despite its years of peeling paint, had a graceful feel to it as its hills rose and fell. I was actually kind of amazed at the height as I stood on the ground level. I followed the track the entire way around just taking it all in and sort of being in awe of how nature had taken over the former ride. 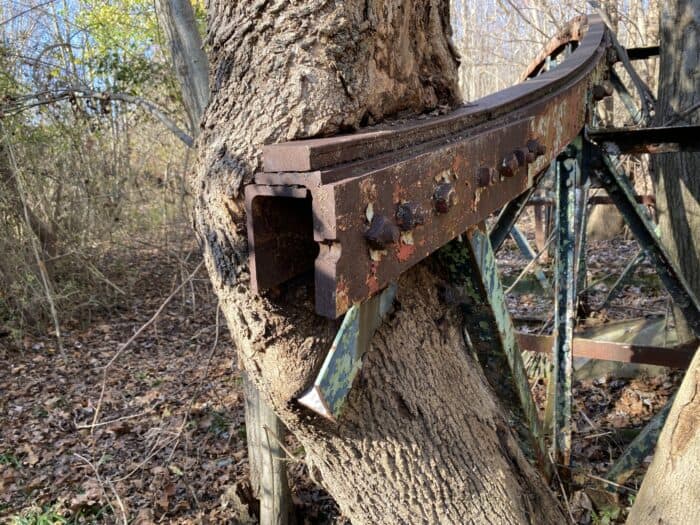 The tree trunk actually grew around the Tumble Bug track.

In the past 50 years since the ride stopped, trees began growing up through the ride. As the years went on, the track actually became part of the tree trunk. 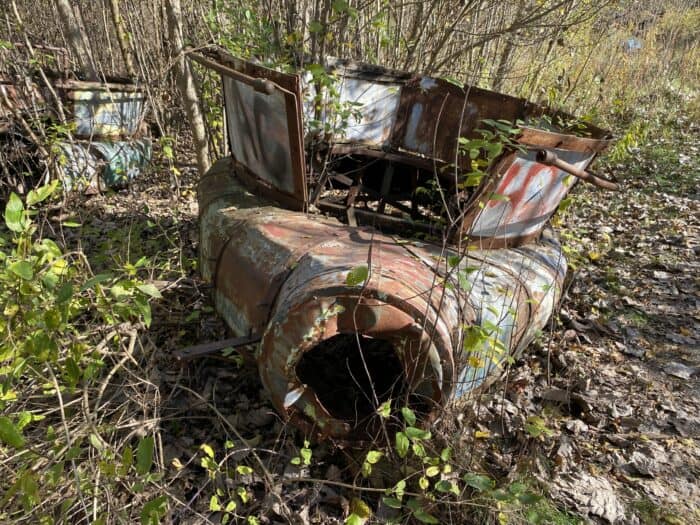 This Tumble Bug car would have had a cute bug “face” at one point that even lit up while the ride was running.

I knew that there were Bug cars that used to be on the track but within the past 10 years they had been removed from the track in order to sell their motors to Conneaut Lake Park to use to refurbish their Tumble Bug ride. I looked around because I knew that the cars had to be there — and then I saw them tucked in a small clearing. 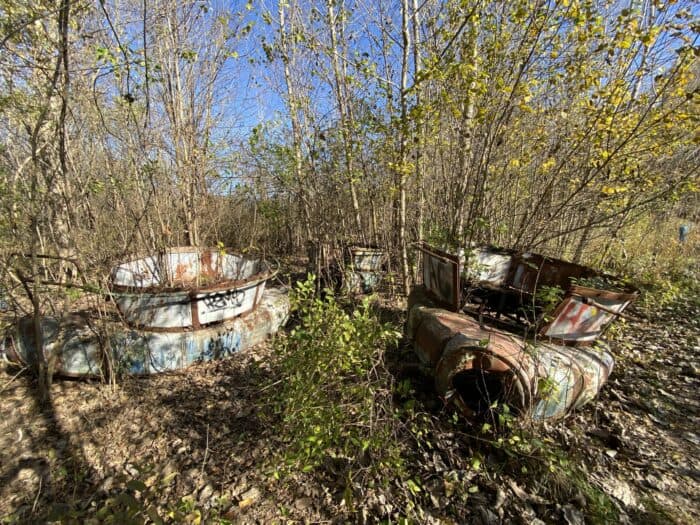 Three of them remained; sitting silently in the woods.

A Ferris Wheel to Nowhere 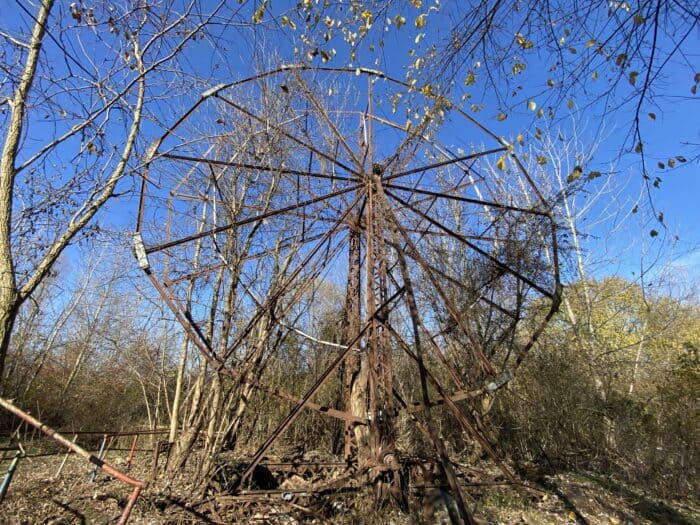 The Chippewa Lake Park Ferris wheel is probably the most famous abandoned ride.

Just beyond the Tumble Bug is Chippewa Lake Park’s most famous abandoned ride. The abandoned Ferris Wheel stands just a couple hundred yards from the lakeshore, but with no seats on it, it won’t be giving rides anymore. For years, a large tree grew up through the center of the wheel but it was cut down when the land was cleared for the failed performance venue several years ago. New trees are beginning to grow up through the wheel, so it many not be too long before the iconic tree is back growing through. 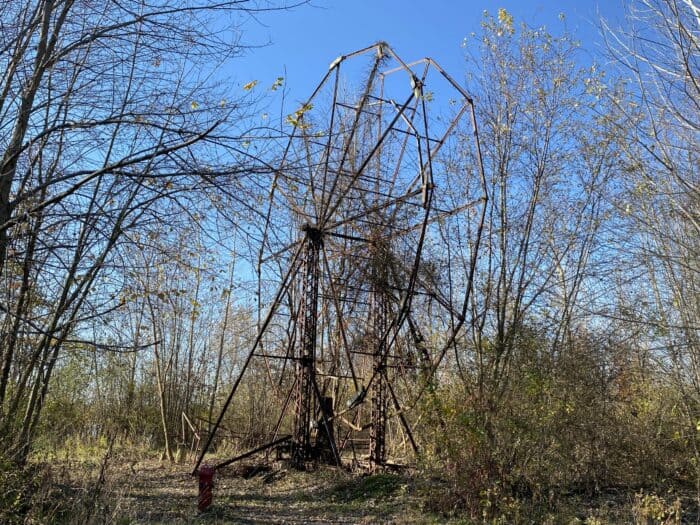 An abandoned Ferris wheel reminds us of days gone by.

While the Tumble Bug and Ferris Wheel are the most famous of the remaining rides, there are two other former rides tucked into the woods. One in particular that I found fascinating was the Flying Cages ride. 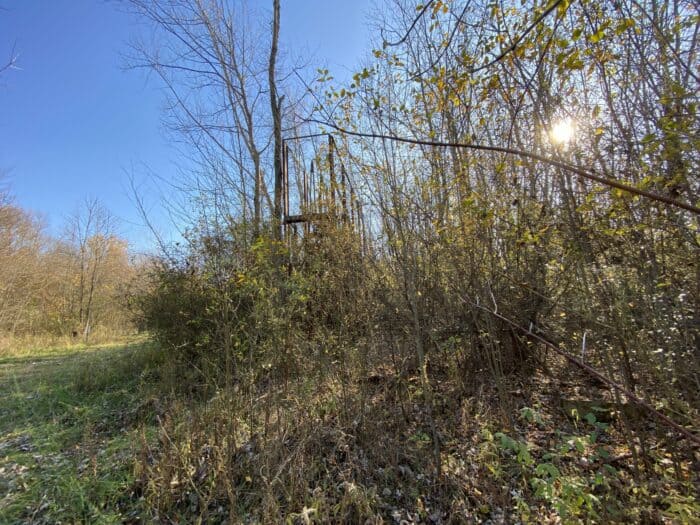 When I came upon this frame, I had no idea what the ride would have been.

When I came upon this ride, I honestly had no idea what it was. It had a mental frame. I could make out queue lines, as well as counter weights on the sides. The counter weights swing, but it appeared something was missing in the center. I walked the entire perimeter of the ride, but still couldn’t figure it out. 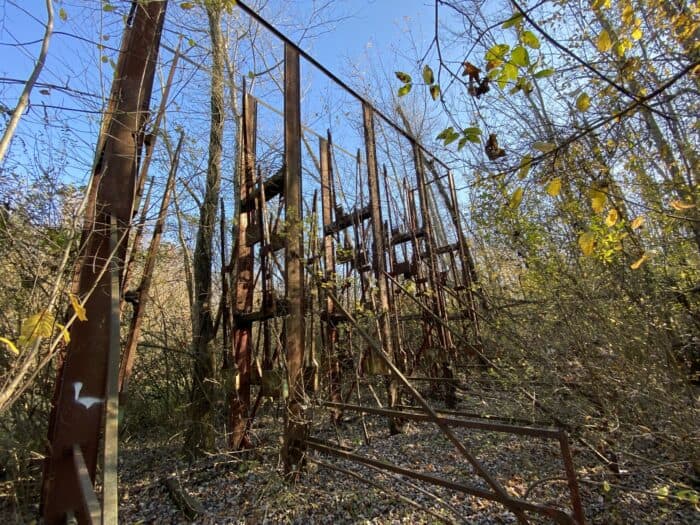 The ride turned out to be the Flying Cages, a ride where you used your body weight to make the cage go up and over.

After I got home, I did some research on the ride and I found out it was called the Flying Cages. It was a set of four and each person stood in a cage and he or she used their body weight to swing the cage back and forth in order to get the cage up and over. In all my amusement park research, this was the first I’d ever seen this ride. Here is what I found on how the ride actually worked: 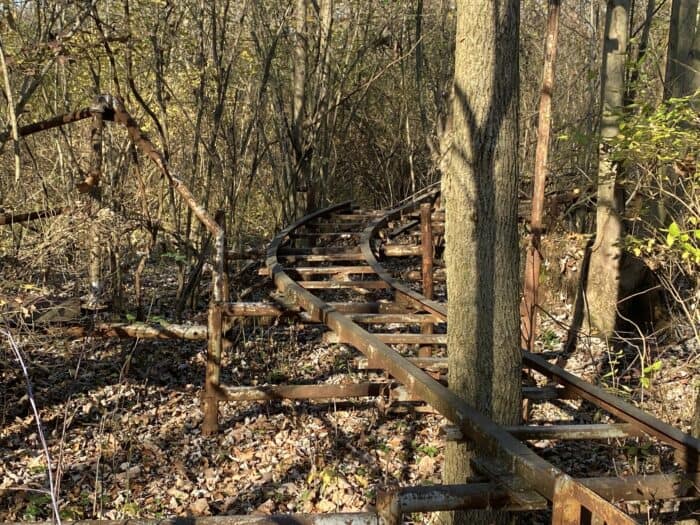 The final curve of the Little Dipper before it entered the loading station.

The last remnant came across was the remains of the Little Dipper roller coaster. Sadly, the large roller coaster The Big Dipper has been gone for over ten years now which is heartbreaking in and of itself. The silver lining is that this kiddie coaster still remains. 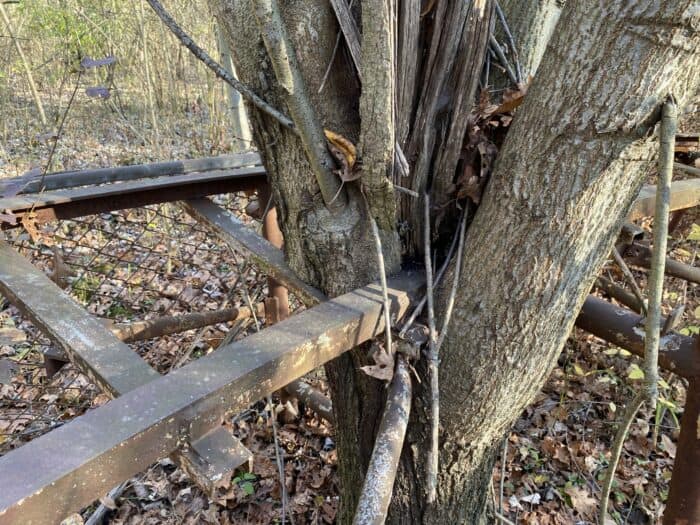 The trees have started growing up and through the tracks of the Little Dipper.

The Little Dipper was a steel coaster which ran on a circular track. Similar to the Tumble Bug, nature has taken over the ride. Trees grow up through the track, some trees even growing around the tracks. 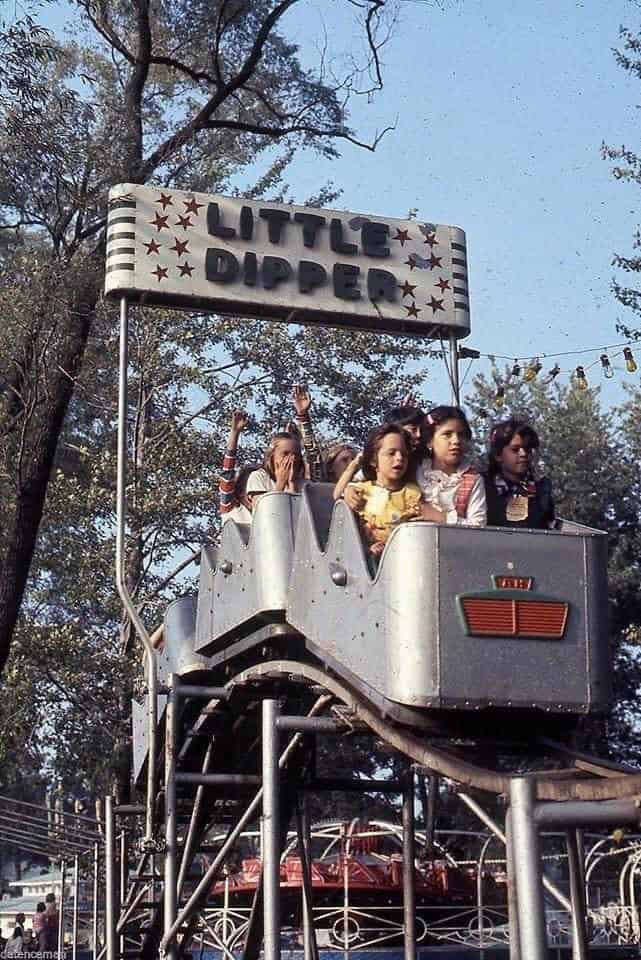 Here’s a vintage image I found of the Little Dipper when it was in operation. I am guessing this is at the top of the initial lift hill, but can anyone tell me for sure?

At some points, the trees have even twisted the tracks and broken them off of their footers. 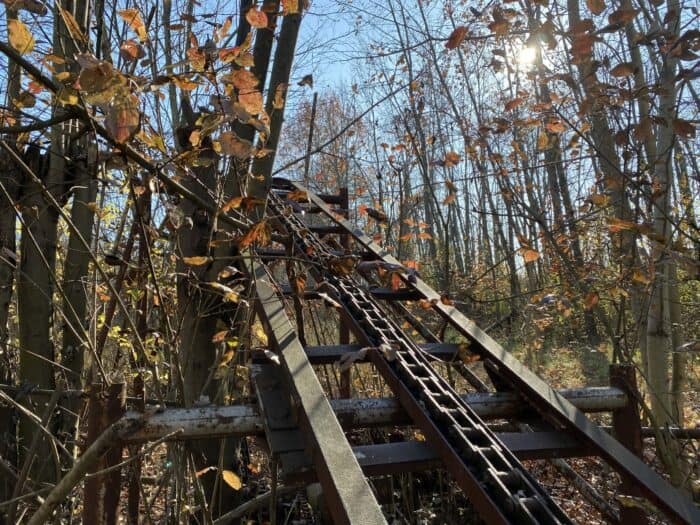 Beware at the top of the lift hill as the track is twisted off! 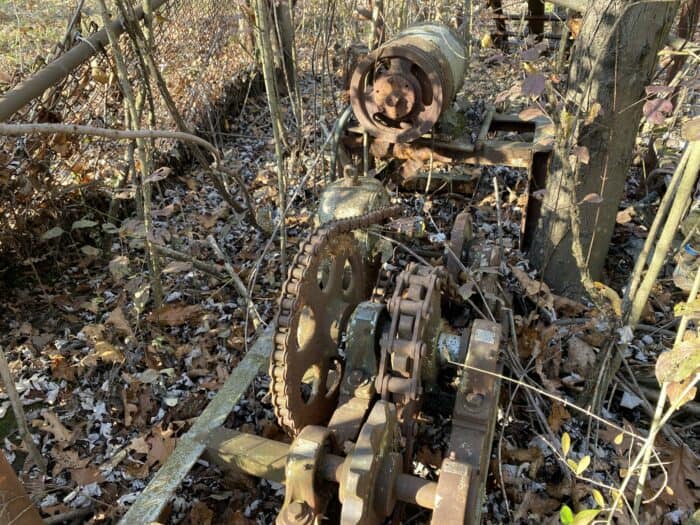 The motor for the lift chain of the Little Dipper remains for a coaster that will never run again.

I had the opportunity to walk the track and even climbed to the top of the lift hill, but watch out, it’s sort of a steep first drop!

After coming home I learned that there was a bandshell that had remained at the park for many years and may still be there — the reports are mixed on whether it has collapsed or not. There are other random collapsed buildings scattered throughout the remains of the park. I am guessing that these were once game booths or food stands. I even found things such as pieces of track from the miniature train still buried in the woods.

The Future of Chippewa Lake Park 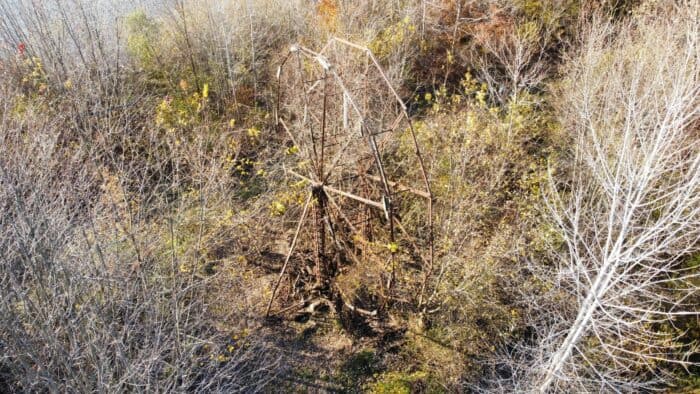 I would have loved to have experienced this park when it was operating. It was also home to the ultra-rare ride, Vettel’s Caterpillar. The future of the park has remained uncertain for years, with the former rides hanging in the balance. In 2020, however, Medina County bought the park.

The plans for Chippewa Lake Park are to restore the park to a public park, but not a functional amusement park. The concrete walkways would be removed in order to create wetlands and remediate algae blooms that were happening in the lake. People have expressed concern that the ride remnants would be demolished, but Medina County has suggested that interpretative panels would be installed about the ride remnants. Hopefully, whatever happens they do make it a point to save the ride history.

Chippewa Lake Park has a fascinating history and sadly the park had a rather unceremonious ending — as most of them do. Whatever the future holds for the park, it’s an experience I am glad I got to do. 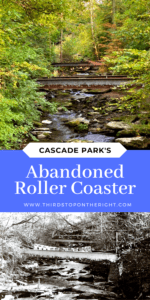 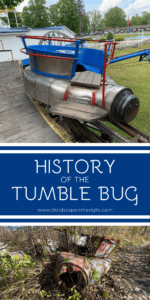 I never got to see a lot of the park - am from Westmoreland County but spent a few summers at a cottage at Chippewa Lake in the early 80s. My sister worked at the big restaurant that's still lakeside. The abandoned parked seemed spooky even then.

Always thought the town in general was beautiful and still think the whole area could be really something with a little vision.

Glad the county bought the park - buys them a bit more time to figure out what's next.

Chippewa Lake Park was the most beautiful Park in Mondina County in Ohio I remember going to visit family members in Columbus Ohio on Family Vacations and we will go to Chippewa Lake Park and spend a few days there on the Park grounds in the hotel. The hotel was absolutely beautiful inside the lake was crystal clear you can see people swimming in the lake and riding on the boat that went a around the lake and others going on the other rides playing games of chances and the video games in the huge arcade that was there food and drinks at the snack bar stands and family cafes and restaurants also and two huge per villains to go sit down at the picnic tables and eat your meals at. The bathrooms and bath houses were great condition at the time the ballroom was huge and beautiful for family events and dancing. There was miniature golf was fun to play and so much more. I miss Chippewa Lake I cannot believe that it is now gone for good it brings back such fun memories and good times. Thanks for the fun times and great memories to last for a lifetime there Chippewa Lake Park we all loved you and and you will be greatly missed Sincerly Susan Lee Iseman from Upstate NY.

Incredible collection of photos. For some reason, I can just sit and stare at photos like these for what seems an incredibly long time. The power of photos like these to bring back the past and rekindle old thoughts and memories is incredible. What a pleasant surprise it was to discover these photos on this page. Thank you !!