Skip to Content
To read more about the history of Old Overholt Whiskey and the Broad Ford Distillery, check out part one of my post. 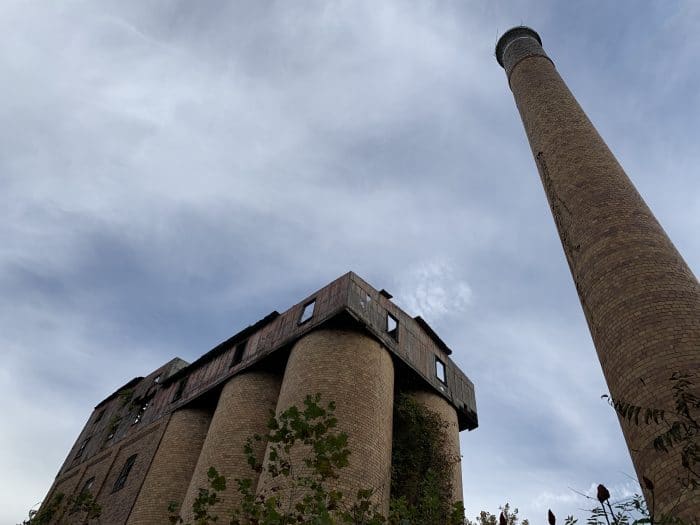 By the 1970s, the Broad Ford site had descended into ruin. Although the massive grain silos, warehouse, water tower, boiler house, and warehouse remained their neglect and exposure to the elements made the site a prime target for vandals and scrappers. 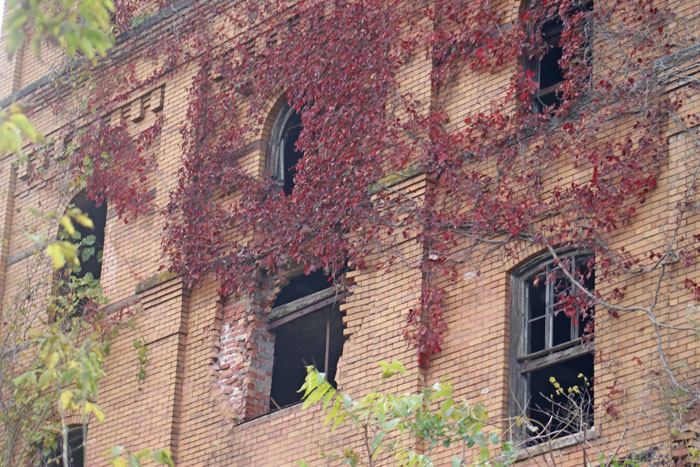 After a recent visit to West Overton Village in Scottdale, I became aware of Broad Ford’s existence. It’s one of those places that if you didn’t know it’s there you’d probably (never?) miss it. Most people only learn about it through trips on the Youghiogheny River, because of a connection to Connellsville, or through reading this post. 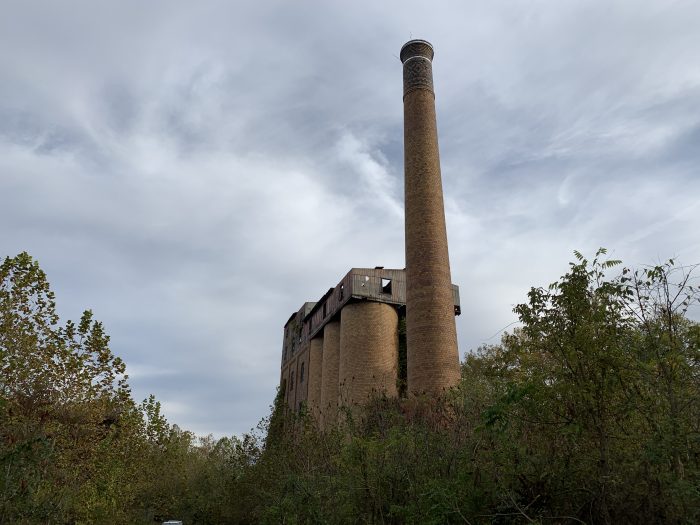 The complex is considerably smaller than it was in the pictures from the 1940s, although the granary building, grain silos, office building, boiler house, and engine room, still soar against the skyline.

Just outside of Connellsville, Broad Ford is nestled along the Youghiogheny after a short drive through some farmland. After rounding a bend, you see it rising against the skyline — the six enormous grain silos and the intricate brick smokestack. Although in ruin, it is still a sight to behold. 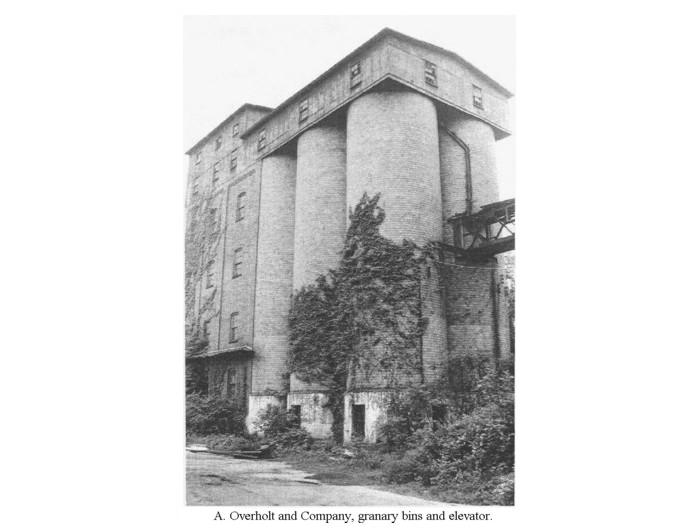 This is an image of the granary bins and elevators when the Broad Ford distillery was still in operation. Note the conveyor on the right-hand side. 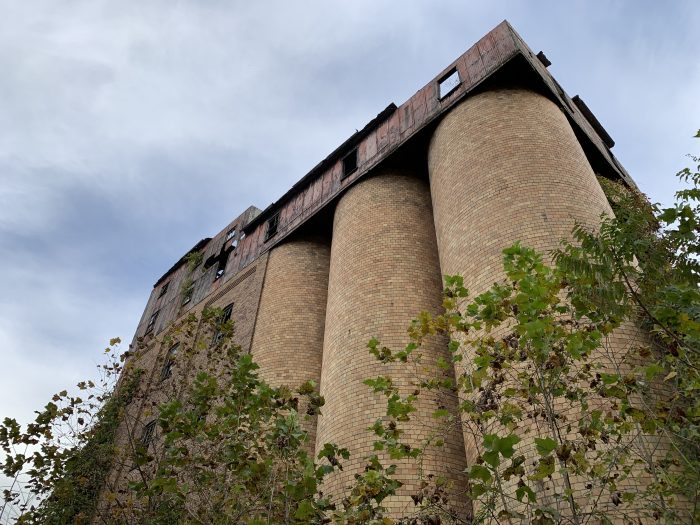 The six massive grain silos as they stand today.

The distillery has been silent for over 50 years, but standing at the base of these massive yellow buildings gives you a sense of how imposing the site must have been when it was in operation. 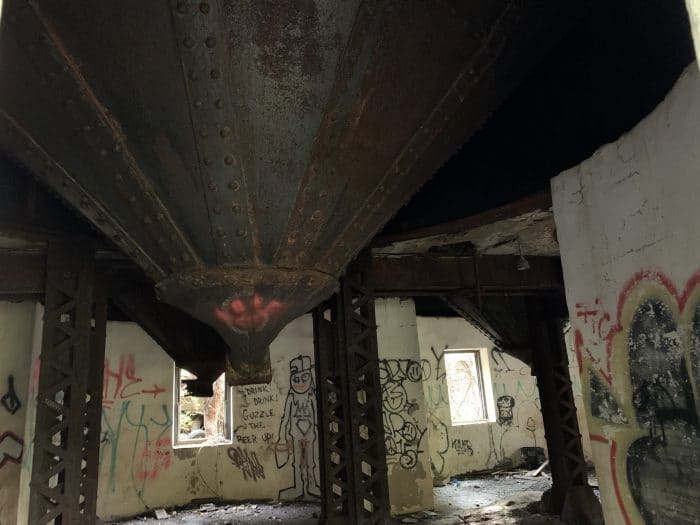 Old equipment can still be seen inside the windows at the Broad Ford distillery.

The first building we encountered was the granary bins and elevator. Six gigantic silos held the grains which would be dispensed into the buildings below. A quick look inside the building’s windows revealed some of the equipment still in place. 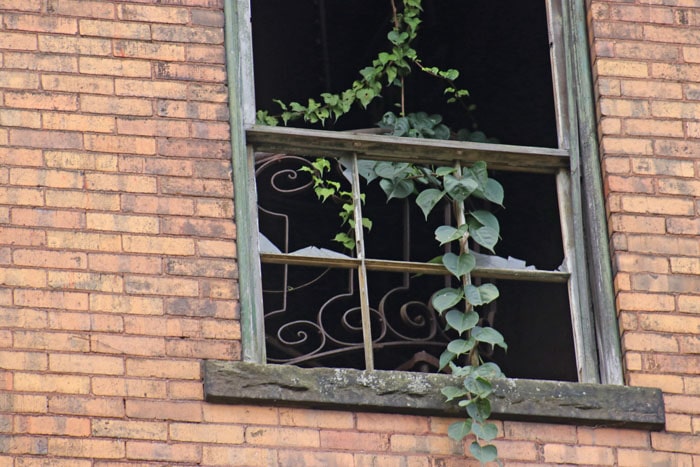 If you look closely you can see the old, intricate iron railing on the staircase through the window.

A conveyor was used to connect the granary bins to the adjacent boiler house and engine room but that is long gone, most likely used for scrap. What you can see if you look closely at the windows of the office building is ornate ironwork used for the handrails on the stairs which are still intact. 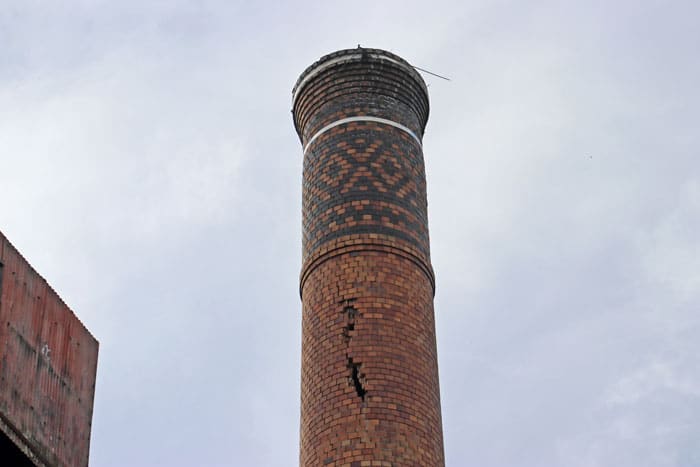 Rising even higher than the grain silos is a single brick smokestack which is intricately decorated at the top — something you just don’t see anymore. 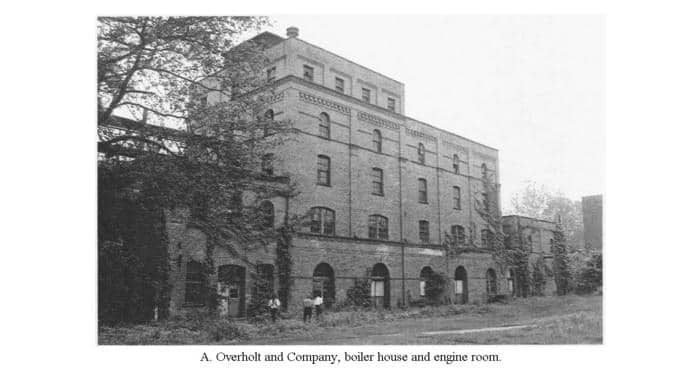 An image of what the Broad Ford boiler house and engine room looked like when the complex was in operation. 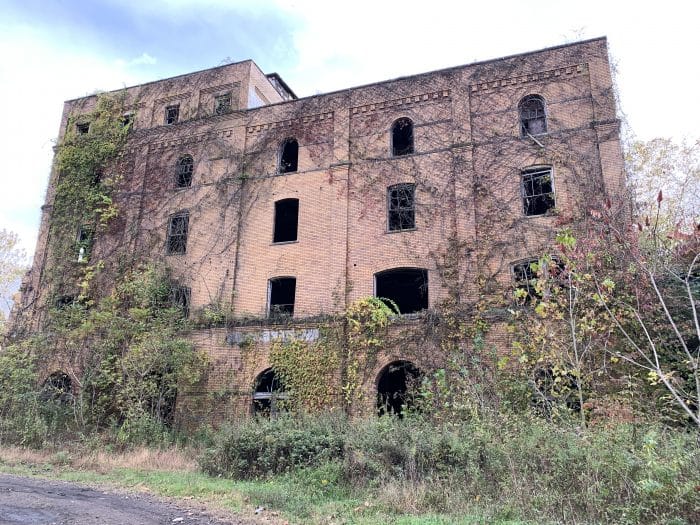 What the boiler house of the Overholt Distillery looks like today.

Next we encountered the boiler house which also housed the engine room. 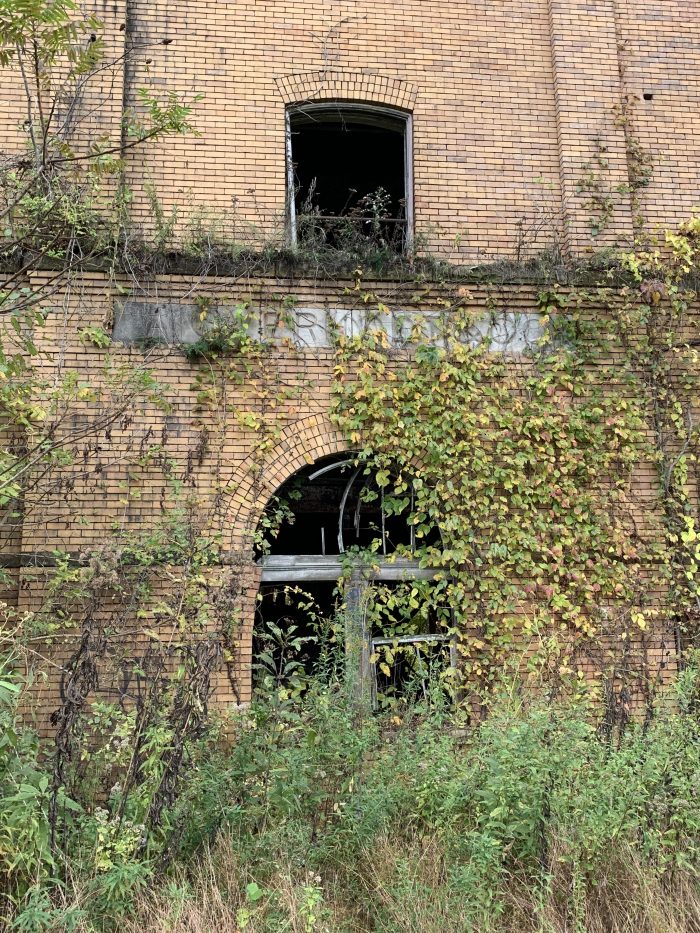 The most notable feature on the boiler house is also incredibly easy to miss — unless you are looking for it. The front of the building features five, large, arched doorways. Now obscured by overgrowth, above the doorway is a stone sign stating “A. Overholt & Co.” It’s probably the most recognizable aspect of everything left at the site. Look at this postcard from the early 1900s compared the picture of the building today (2019) more than 100 years later. 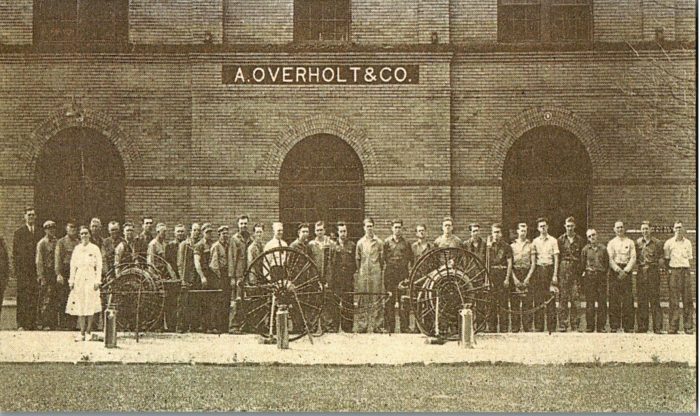 In this early image of the Overholt Distillery in Broad Ford the “A. Overholt & Co.” sign is clearly visible above the arched doors. 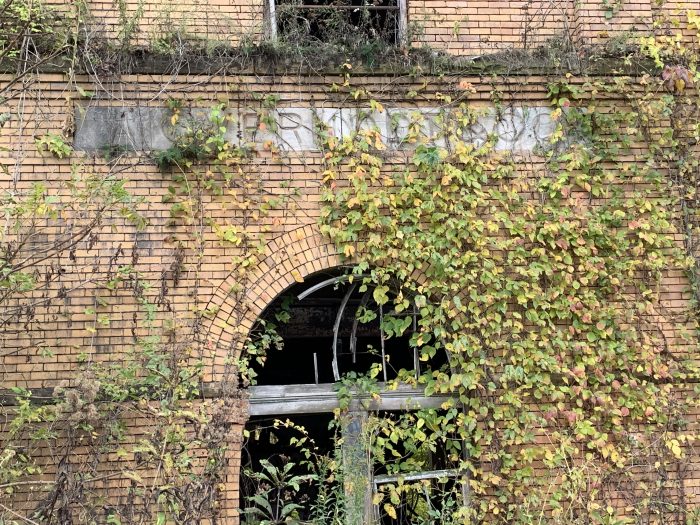 Hidden behind the overgrowth, the A. Overholt & Co. sign is still visible on the side of the boiler house today.

A look inside of the old, arched doors reveal a room that has been pretty much stripped of anything recognizable. There is an odd tank-like structure in the back of the room which was curious. (If anyone who has knowledge of what this might be I’d be interested in knowing!) 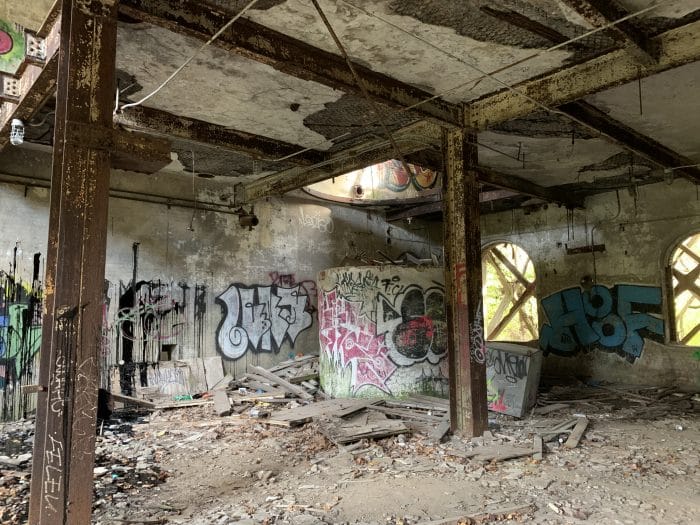 The stark inside of the boiler house of the Overholt Distillery. 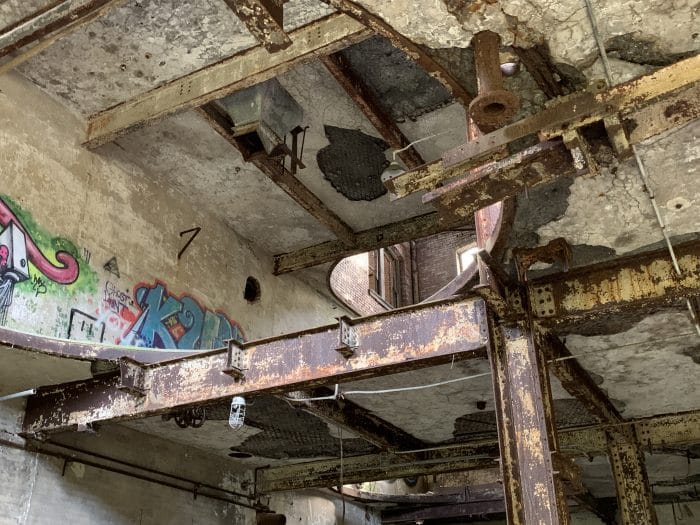 Another view from inside the boiler house. 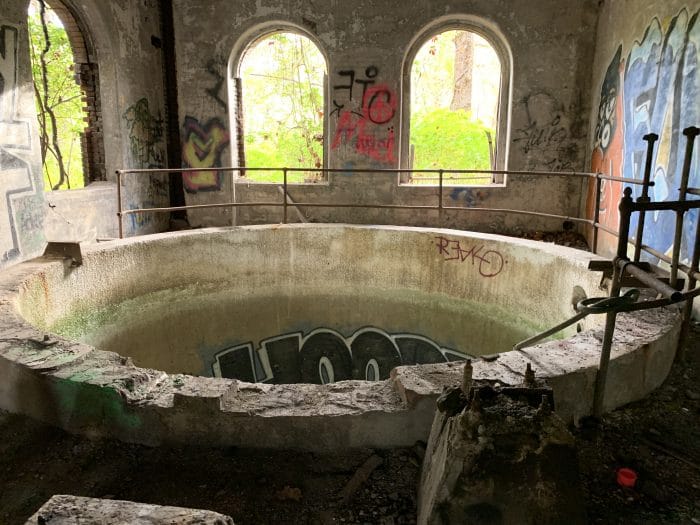 A curious tank of some nature is in the back of the boiler house. 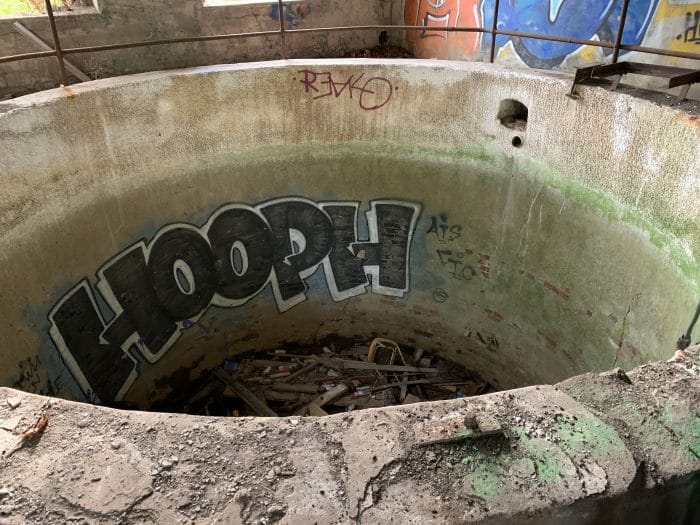 Another view of the tank inside of the boiler house.

While the distillery may look ghostly, some people say it really is haunted by the ghost of Jacob Overholt. Read the story and see what you think. 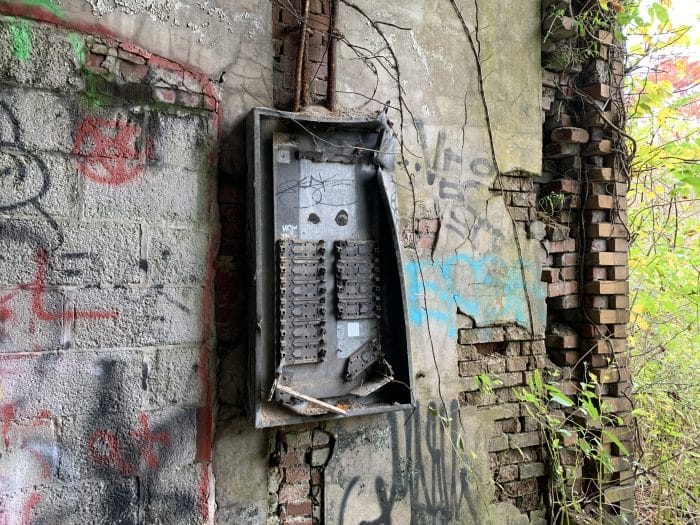 Abandoned equipment inside the boiler house.

It’s obvious this site has been victim to heavy vandalism judging from the amount of graffiti, empty spray paint cans, broken glass, and other debris. I try not to get on my soapbox too much about vandalism at abandoned locations, but if you ever feel inclined to vandalize an abandoned property — JUST DON’T DO IT! It ruins it for everyone and diminishes any chances for historic rehabilitation. Just don’t. 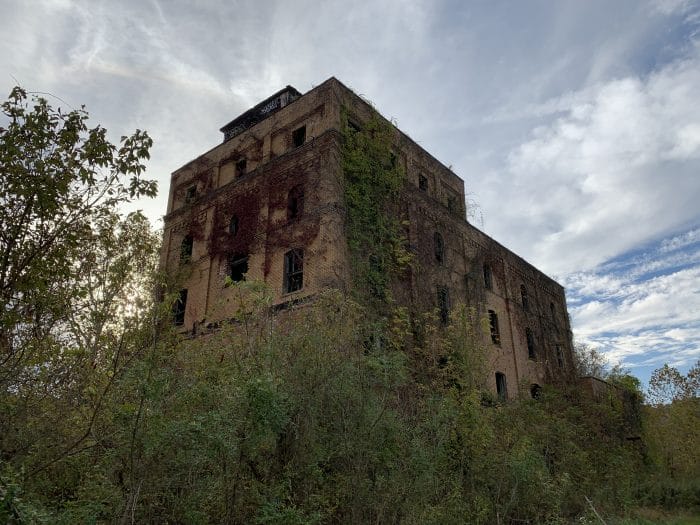 Slowly buildings that appeared in the early photos of the site are disappearing. The red brick warehouse that once held the barrels of whiskey has been reduced to a pile of rubble, the water tower is gone, as is the swinging bridge that used to cross the river. There are several other buildings on the property that we didn’t get to see as well as the pilings for the old bridge but the overgrowth was still quite thick and ticks are still very much in season so I’ll have to check them out some other time. 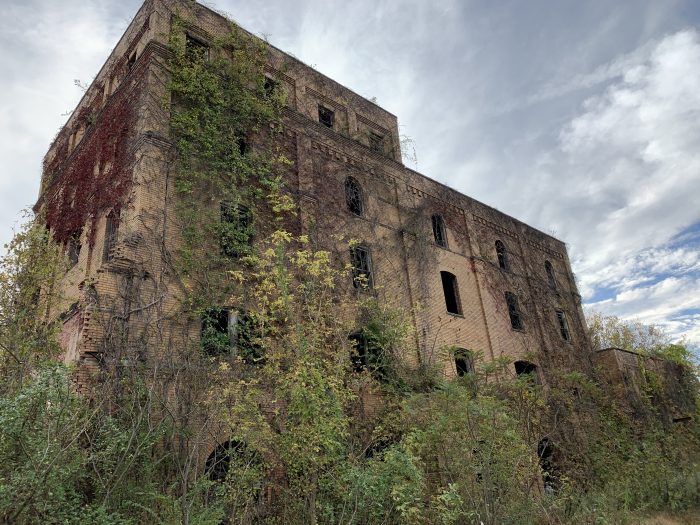 I know there have been efforts to preserve the site in one way or another, especially since the bike trail is not too far away. It seems like a monumental task, but so did Carrie Furnace so it is absolutely possible. It would be a shame for this historic distillery to completely disappear. 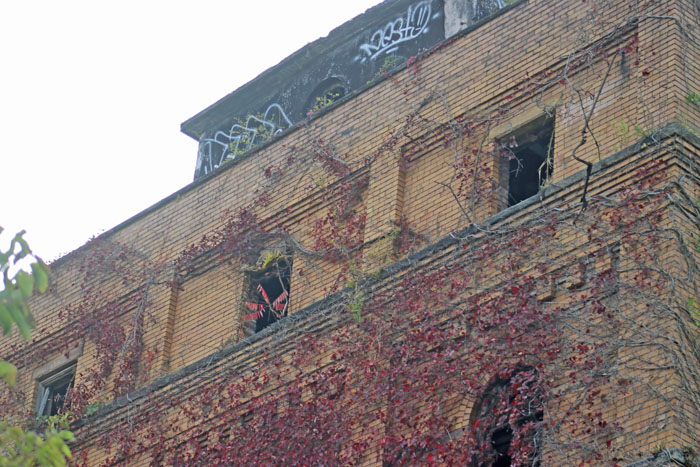 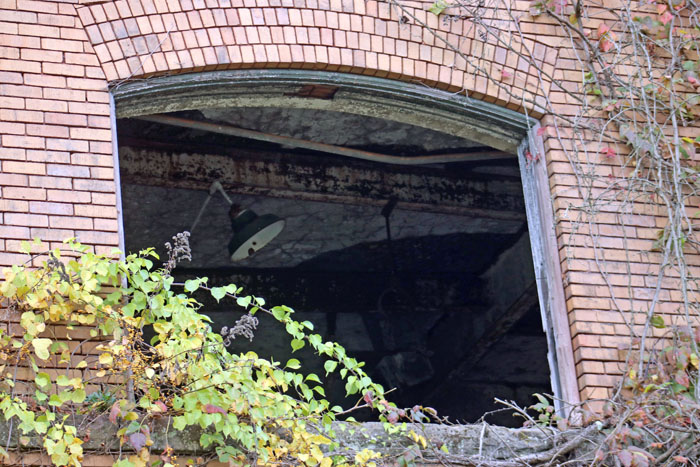 In the meantime, be sure to check out the efforts of groups such as Preservation Pennsylvania who are working to save sites like Broad Ford Overholt Distillery. Also check out West Overton Museum for more information about Abraham Overholt, Henry Clay Frick, and their influence on Western Pennsylvania whiskey making.
If you didn’t read Part One of this blog post about the history of Old Overholt Whiskey, be sure to check that out as well.