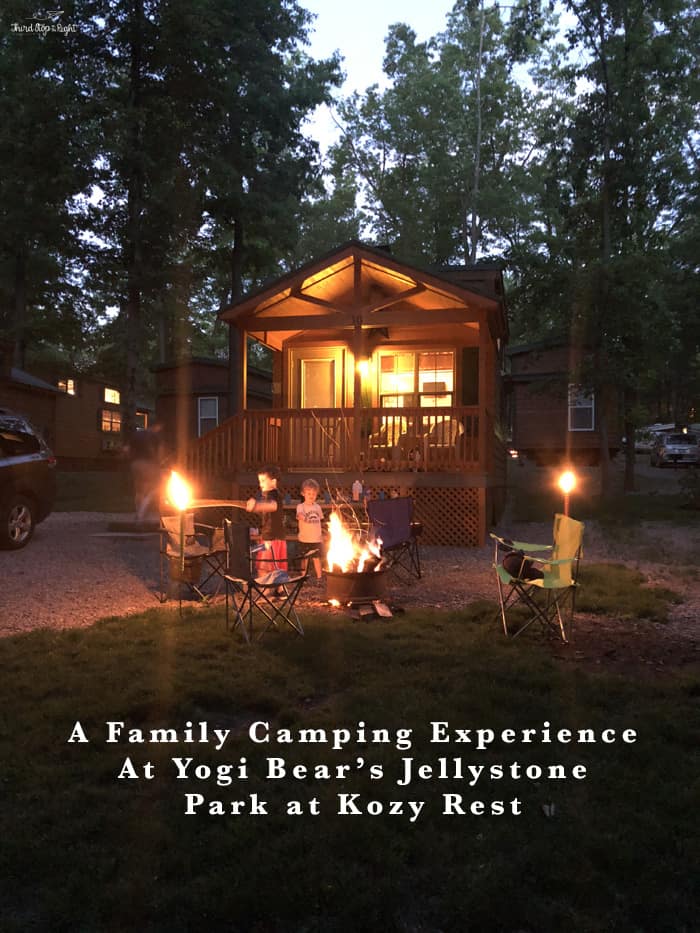 We were compensated with a free weekend stay, but all thoughts and opinions are strictly my own.

It’s been years since I’ve been camping. Literally years. In fact, the boys had never been camping and it was an experience that I was something I have been wanting to do with them. This summer I am all about getting out and exploring the world we live in. Just because they aren’t in school doesn’t mean that they can’t keep learning.

In the past, all I have ever done was tent camping, but with two young boys I wasn’t sure how that would go. Thankfully, at Yogi Bear’s Jellystone ParkTM at Kozy Rest they have some amazing cabins which was perfect for the whole family. (Plus, it make the idea of “roughing it” a little more palatable.)

We decided to make a long weekend out of the adventure so we packed up the kids and the car and headed up to Harrisville, which is about an hour’s drive from Pittsburgh.

The kids were excited and their excitement just kept building as we got closer. The check-in process went smoothly and the campground even gave us an escort so we could find our cabin more easily. As soon as the kids got out of the car, of course, they wanted to check everything out.

I’ll be honest, when I heard that it was a cabin that we were staying in I wasn’t sure how rustic it was going to be. I knew that it had running water, but beyond that I didn’t know much. I was so surprised when I saw the cabin at how nice it was. It is pretty much one of those tiny homes, complete with the loft, bathroom (with toilet, sink, and shower) as well as a bedroom with two sets of bunk beds. There was even a miniature kitchen with a stovetop, sink, and refrigerator/freezer. What is even better is that it also had air conditioning and a TV!

I will note that you will need to bring your own towels, bedding, and toiletries, plus any food or drinks that you want.

We were able to get everything into the cabin and start getting settled in when it started to rain. And I mean rain. Thankfully, since we were in the cabin this wasn’t a problem. I can’t even imagine what it would have been like in the days where I used to go tent camping.

Due to the rain, we decided to call it an early night so we could then get an early start on the next day. With so many options and things to do we knew it would be a busy day.

As I said, I am all about teaching my boys about the world around them. There is so much to see and do and they are things that they won’t necessarily learn in school. McConnells Mill State Park is only about 20 miles from the campground and features a gristmill that was built in the 1880s along Slippery Rock Creek. I wanted the boys to be able to see the gristmill and the waterfall so we headed out there shortly after waking up.

We got back to the campground later in the afternoon and we decided to participate in some of the activities that Kozy Rest had to offer. Since we hadn’t had much time to take a look around the campground the night before, we decided to take one of the 4-seat bikes out for a ride. The rental of the bike is included with the campground fee so it was free to use. All you have to do is get a wristband.

After the ride on the bike, Ethan really wanted to play miniature golf. He has taken an interest in golf recently, and he had been asking most of the day if we could do that first. It is a cute 18-hole golf course which is perfect for kids. The best part is that since it is part of the overall campground fee, if your kids get tired of it and don’t want to finish then you didn’t have to pay anything extra!

It was pretty hot that day so we agreed to go take a dip in the pool afterwards. The pool wasn’t huge and is only five feet deep (so no diving), but there weren’t a lot of people and we had a lot of fun just playing with the kids in the shallow end.

In addition to some of the activities that you can do anytime of day such as the pool, miniature golf, playground, bikes, or jump pad, there are also special events that take place throughout the day such as visits with Yogi Bear, firetruck rides, and the Heyride. Reese really wanted to ride the firetruck so after getting cleaned up after swimming, we headed back to the main camp area to ride the firetruck.

What was really great about this firetruck ride was that the boys really got to be up-close by riding in the front seat of the engine. I sat in one of the jump seats right behind them. They boys were fascinated about being in the front and also getting to pull the air horn cord.

Did I also mention that we got a special visit from Yogi Bear? Yogi came by the cabin in the evening to read Ethan a bedtime story and to visit for a while. Reese wasn’t such a fan of Yogi, but we were able to sneak in a picture or two of the two together!

Of course, no camping experience is complete without a decent campfire and s’mores. Firewood is available for purchase at the campground office, so we purchased a tub to use in the fire ring in the front of the cabin. I recommend bringing either some wooden roasting skewers, or purchasing some of the metal forks from Amazon, The boys had a blast, but I think it was Ryan and I that ended up eating most of them! The boys just enjoyed roasting them.

All of the day’s activities wiped the boys out and they were actually asking to go to bed. That left a little time for Ryan and I to enjoy the fire before calling it a day ourselves.

Let’s just say that by the time we got home on Sunday we were exhausted, but everyone had a blast so that was all that mattered!

This weekend I am doing something special for my readers and giving away a free two-night
stay (up to six people) at Yogi Bear’s Jellystone Park at Kozy Rest. This offer includes two free nights
Sunday through Thursday, April 15 through October 31, 2018, subject to availability and excluding
holidays. Just enter through the giveaway form below. Winner will be notified Monday, July 30, 2018.

A Glimpse Inside One of Greensburg’s Former Mansions

I would love to go to Yogi and see what all they have to offer !

I’d love to win because I’d love to take our kids here for a weekend! Sounds like a blast!

We’ve never taken the kids camping but recently have been talking about going to have family time with out electronics!

I so need a mini vacation!

I would like to win this prize for my husband because our summer has been so hectic with work! He is currently working 12 hour days for over 30 days straight for catastrophic weather damages that will be over next week and we feel our whole summer is gone already! This would be an amazing getaway to just relax after our work routine returns to normal.

I would love to win this trip for my family so we can get away for a few days. I have a 3, 7, and 9 year old— it can be difficult to find the time we should spend together as a family!

Lovely review of the resort. My family has been considering an adventure to this place. I think my 7 year old would love it and it would be a great opportunity to meet some other children and make lasting memories together.

We love to camp! My boys have been wanting to try Jellystone and a cabin experience!

My husband and I would love to win this trip for us and our two girls. It would be a wonderful chance to get away for a fun weekend together and relax a bit!

I would love to take my kids here on their first camping trip!

We have never been here. Sounds like so much fun! My family loves to camp. Would love the opportunity to get away and make some great family memories.

Thanks for the opportunity! Would love to take my daughter for her first camping trip as I have many memories camping as a child!

Such a fantastic idea for families that want to enjoy nature!

I would love to take the kids. We have been talking on and off about camping for years but haven’t gone yet.

Would be a great get away with my grandson.

I would love to win this so we could have some family time fun with our kids. This place looks like fun. Never bern there. Its been about 8yrs since we last went camping.

I would love to win this to have some quality family fun time with our kids. This place looks like fun and we have never been there.

Would love to be able to take my two son’s

I have been working both my jobs so much this summer before the one closes (Carbones) and my kids and I would love some family time away! This place looks fantastic!!!

My husband and I would love a calling her away just the two of us!

This would be a wonderful trip for my kids and I.

This looks like so much fun. I would love to take the kids!

We love Yogi Bear campgrounds!! A getaway weekend is just what my little family needs.

My kids love to go camping. This would be a great chance to make fun memories with them!

My family has been making great memories camping! I have a 6 yr old autistic, adhd son that loves to be outdoors and is his happy place!! We have never been to this campground and would love to experience it!

Would love to do this with the kids. Work too much don’t play enough

Camping at Yogi Bear would be a great way to surprise to my kids and wrap up the summer!