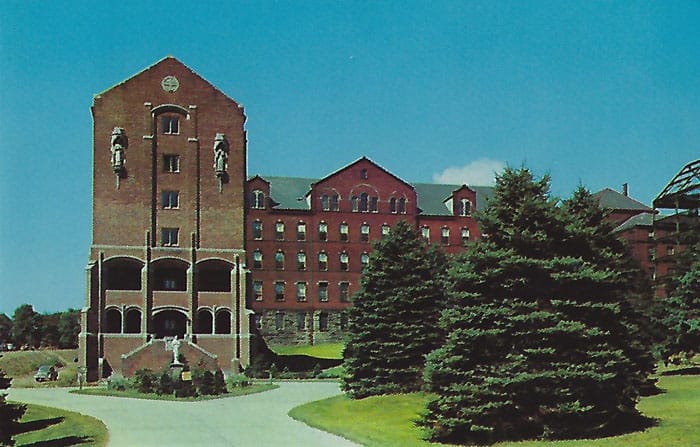 It’s been a while since I’ve told a good ghost story and this one comes from another Westmoreland County landmark, Saint Vincent College. While there have been tales of mysterious happenings at Saint Vincent for years, the one that has always fascinated me is the story of haunted Aurelius Hall.

This campus residence hall was built in 1922 by a renowned local architect name Carlton Strong and named after the fourth Archabbot Aurelius Stehle. It was originally built with 180 rooms to house seminarians, but was eventually converted to house on-campus freshmen.

As with any building that is almost 100 years-old, there are a lot of stories floating around — especially about the seventh floor. The first three floors house the McKenna School of Business while the upper three floors are suite-style housing for students. The seventh floor is off-limits.

An article from the Bradford Era newspaper on May 1, 1976.

The most notable event related to the seventh floor is a fire that took place on April 30, 1976. At approximately 4 p.m. on a Friday afternoon a fire broke out on the seventh floor of Aurelius. All 150 students were evacuated and no injuries were reported.

The fire was big news with headlines such as “Fire Damages Aurelius Hall” and “Blaze Rips Top Floor of Saint Vincent Dorm” were found in all of the local papers. While classes at the college continued as usual, students simply moved to other dorms. When all was said and done, more than $250,000 worth of damage was done to the dorm.

The cause was said to be an electrical fire.

No matter the official cause of the fire, urban legends began swirling about the “true” cause of the fire. According to a 1996 Saint Vincent Sociology Department publication, the legend of the Aurelius has a much more sinister feel.

According to the legend, the fire started in the dorm room of a male students on the seventh floor who was reportedly involved in the occult. On the night of the fire, the student was lighting candles as part of a Satanic ritual which ultimately started the fire.

After the fire was extinguished, the body of the student was found lying on his bed. The room was completely burned and everything but the bed and the body were destroyed by flames.

Despite renovations to the building, no one ever again resided on the seventh floor of Aurelius.

The Haunting of Aurelius Hall

Even though Aurelius Hall has been renovated several times since the fire, students still claim Aurelius is haunted. Some of the encounters include flashing lights, the smell of burnt wood in the stairwell, and a chill near the door of the seventh floor. Others report hearing footsteps and the sound of someone bouncing a ball on the seventh floor. The residents of the sixth floor most frequently experience these anomalies.

Whether or not Aurelius Hall is really haunted depends on who you ask, but one thing is for sure is that at 97 years-old Aurelius Hall has seen a lot of history at Saint Vincent College.

All Freshmen started there on campus living there. I was there in ‘87-‘88