In one of my past posts I talked about how I used Google Maps to find Plateau de Mount, a former ski resort located in the Pennsylvania Laurel Highlands. Although I knew that the ruins of the former lodge existed, it wasn’t until this year after skiing at Hidden Valley one day I decided to take a little detour.

If you read my previous post, I determined that Plateau de Mount was an inverted layout with the lodge at the top and the ski slopes branching out from the lift. I was able to figure this out by looking at topographical maps because otherwise it looks the opposite according to aerial maps. More on this later. 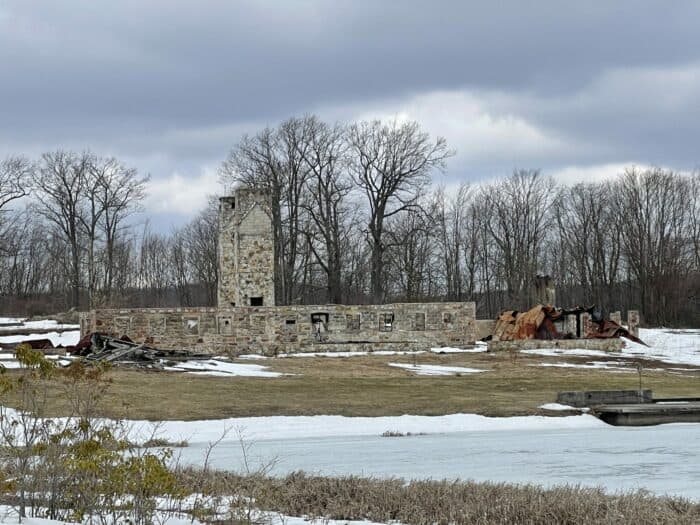 A view of the lodge sitting across a small pond.

According to Google Maps, it appeared that the main road would provide fairly close access to the old lodge and it turned out I was right. Apparently a 2015 arson fire had done in the old lodge, and the former metal roof draped over the stonework like a ribbon. Since the roof was covering most of the floor I wasn’t able to tell if there was solid ground underneath or if it was open to perhaps a basement, so I decided not to venture out onto it. 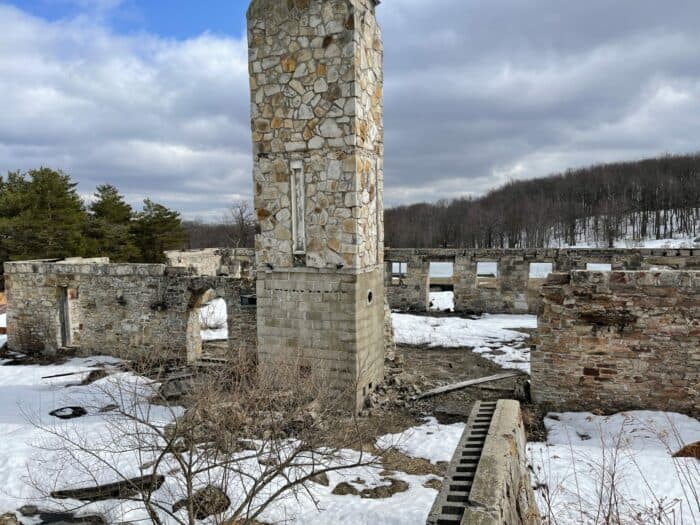 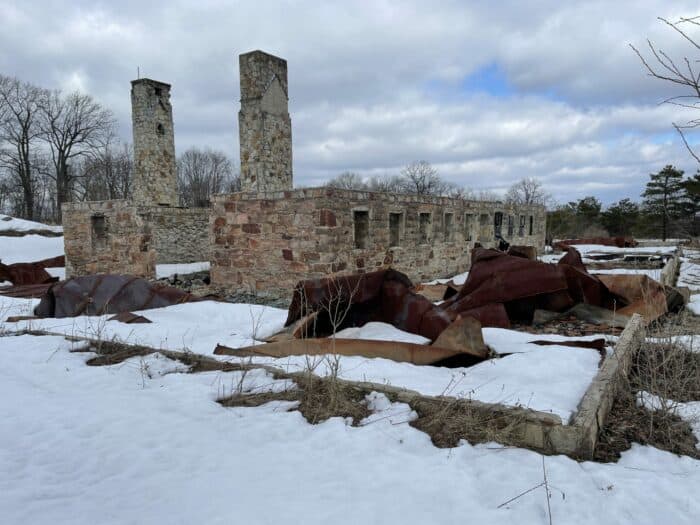 The impressive stone walls, however, remained in tact.

One thing I thought interesting was a pass-through fireplace which skiers outside could use to warm up as well as patrons inside could use in what I assume was a large lodge room. The glass to the fireplace is long gone but the metal surround clearly shows what it was. 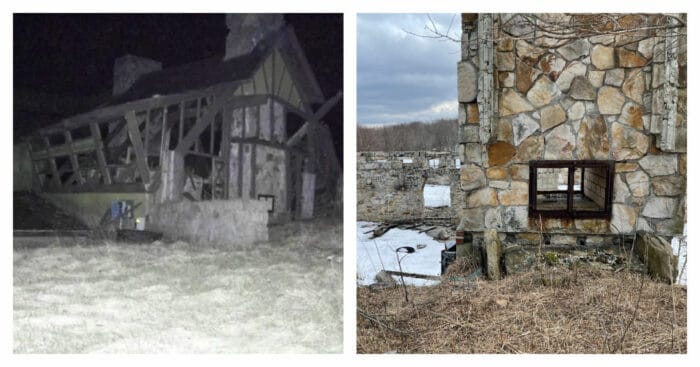 The passthrough fireplace can be seen in both of these photos

In fact, on Flickr I was able to find some old urban exploration pictures of Plateau de Mount before the final fire and it shows this passthrough fireplace. It was interesting to compare this photo to my current photo. 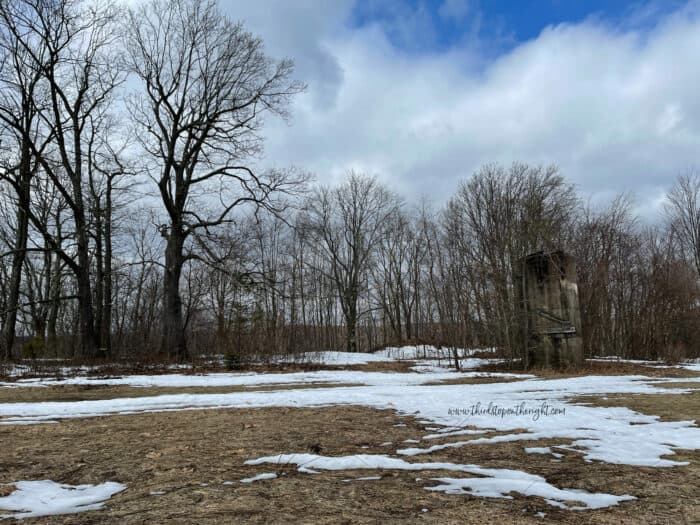 The former tower for the double chairlift 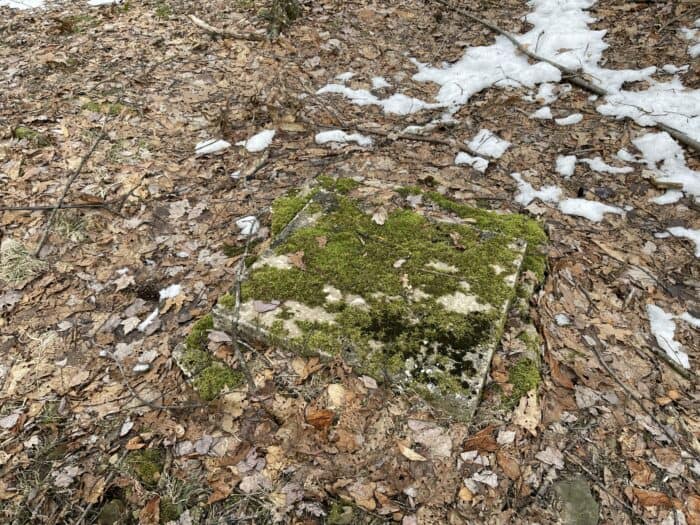 A concrete pad, presumably from the chairlift mechanism.

Just out back from the lodge along the tree line is a large concrete tower which is where the bullwheel would have attached. The lift was formerly a double chairlift made in Austria. 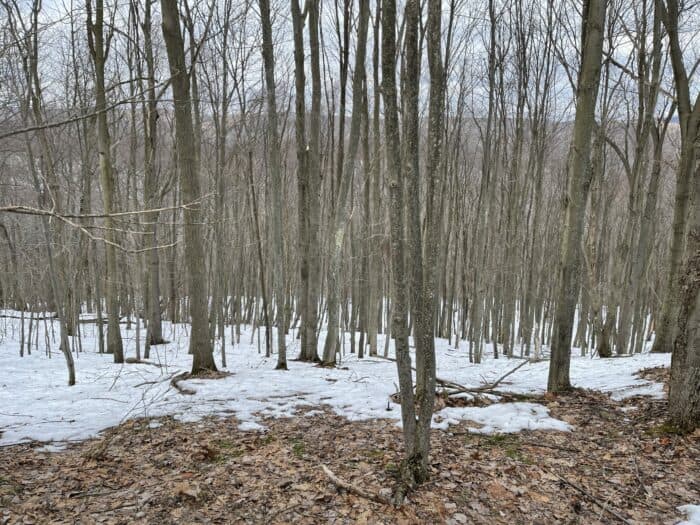 Looking down at the former ski slopes

Standing looking over the hill it can be hard to believe that the area once contained ski slopes, but trees can grow a lot in 40 years. There were seven slopes: three beginner, two intermediate, and two beginner, ranging in length from 2,000 to 5,500 feet. 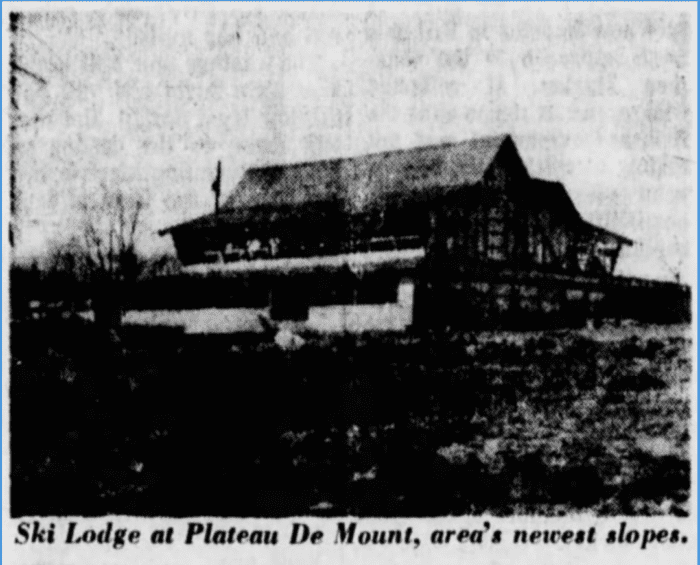 I wish I had better images of the lodge when the resort was in operation but Plateau de Mount had a relatively short run and even newspaper clipping seem to be in short supply. All I have been able to come across is a grainy black ad white newspaper image from when it opened. At one time the lodge had a restaurant, office, ski shop, rental shop, and small nightclub. Also on the property 22 horses were stabled during the summer months.

Unfortunately, Plateau de Mount didn’t have snow-making capabilities and relied entirely on the mercy of Mother Nature. With the mountain facing the sun, it was difficult to keep snow on the slopes and Plateau de Mount only lasted several years before closing.

I would be remiss if I didn’t make a note about the original owner of Plateau de Mount, Istvan Upor. Istvan was from Budapest and left his home country after the Russians quelled the Hungarian Revolution. Istvan was not only active but prominent in the underground resistance, and decided he couldn’t live under Russian dominance. He is quoted in a Post-Gazette article as saying “I led a group of eight others across the border into Austria near the Danbue and I certainly would never want to do that again.”

As of right now the ruins of Plateau de Mount are a sad reminder of times gone by, however there is still something magical about a broken down ski lodge with such a beautiful mountain setting behind it.

If you decide to visit the Plateau de Mount site, please be aware that it is on private property and trespassing is discouraged. Please take pictures from the road.

Did you know that Plateau de Mount isn’t the only defunct ski resort in the Pennsylvania Laurel Highlands?