Tucked behind a playground and a ball field in the shadow of Children’s Hospital in Pittsburgh’s Lawrenceville neighborhood lies a 200-year-old building which stood witness to the largest civilian disaster of the Civil War. While most of the Allegheny Arsenal is now gone, the powder magazine is still standing as a reminder of this nearly-forgotten event. 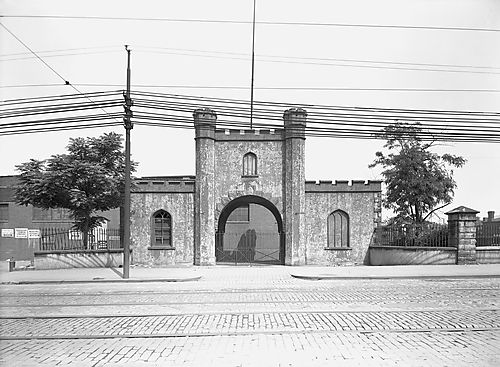 The gates of the Allegheny Arsenal as they looked in 1937. (Photo from HistoricPittsburgh.com)

Established in 1814, the Allegheny Arsenal manufactured supplies and munitions for the U.S. military. At its opening it employed approximately 308 individuals, but that number swelled to over 1,100 as the arsenal became pivotal for manufacturing supplies for Union forces during the Civil War. Many of those employed there were women and young girls from the surrounding neighborhoods. Some were as young as 12-years-old.

On the afternoon of September 17, 1862, 158 of those workers were in the arsenal’s main lab working on assembling cartridges when the unthinkable happened. 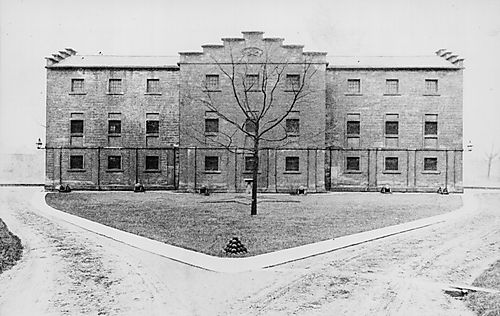 A building at the former Allegheny Arsenal. Note that the emblem on the top of the building is the same as the one on the current powder magazine. (Photo from HistoricPittsburgh.com)

Before we go much further in our story, it is vitally important to mention that black powder which is used for making munitions and any sort of a spark don’t mix — ever. So at approximately 2 p.m. when Jacob Frick (not related to “those” Fricks) was driving a wagonload of barrels full of gunpowder into the arsenal and his horse’s iron shoe struck a spark, disaster struck.

Witnesses reported seeking the spark coming off the shoe of the horse (although there were claims that the accident originated from inside the lab and was caused by static electricity from female worker’s hoop skirts) followed by a wall of fire. The first explosion happened at the main part of the lab, followed by a second explosion in a second part of the lab. A third explosion rocked a machine and engine shop next door. 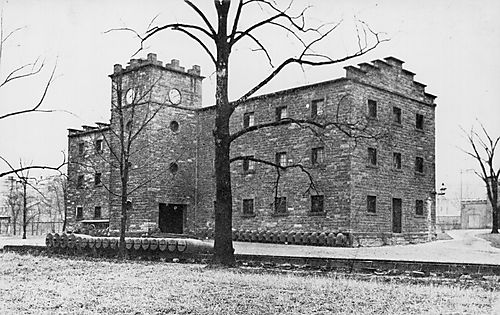 Another building from the former arsenal. There are munitions supplies located in the front of the building. (Photo from HistoricPittsburgh.com)

Mayhem followed as the lab was blown apart. The air was filled with the smell of sulfur and burning flesh. Body parts littered the ground and the screams of those who were injured and dying filled the air. Other workers frantically searched the rubble for survivors.

In the aftermath, 78 people perished in what ended up being Pittsburgh’s deadliest industrial accident and the Civil War’s deadliest civilian disaster.

The Aftermath of the Arsenal

Such a deadly accident should have been on the front page of every national newspaper, but it just so happened that on the day of the accident a battle was raging at Antietam Creek, right out of Sharpsburg, Maryland. This battle, known as one of the bloodiest of the war, overshadowed the bloodiest civilian accident. 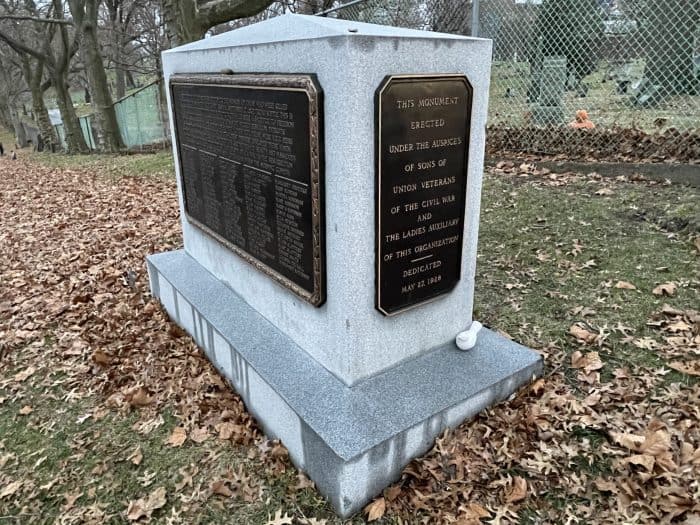 The Allegheny Arsenal Memorial for the bodies of the unidentified at Allegheny Cemetery.

Thirty-nine bodies ended up being so badly burned and disfigured that they were unable to be identified. These bodies were placed in black, government-purchased coffins in a large plot donated by Allegheny Cemetery. The unidentified bodies were placed in a mass grave and marked with a memorial marker. This plot can still be visited today.

An investigation into the explosion resulted in conflicting theories about what happened that September day. Ultimately, the theory about what happened was the some of the DuPont gunpowder barrels may have been being reused and were leaking. The leaking barrels led to loose powder on the roadway leading to the porch of the lab where several barrels of gunpowder sat.

This theory was never proven but speculation continues to this day — including rumors of sabotage.

The lab was rebuilt within the next year and production continued at the arsenal for the duration of the war. After the end of the war, the arsenal was used as a storage facility until the 1900s when the land was sold off. 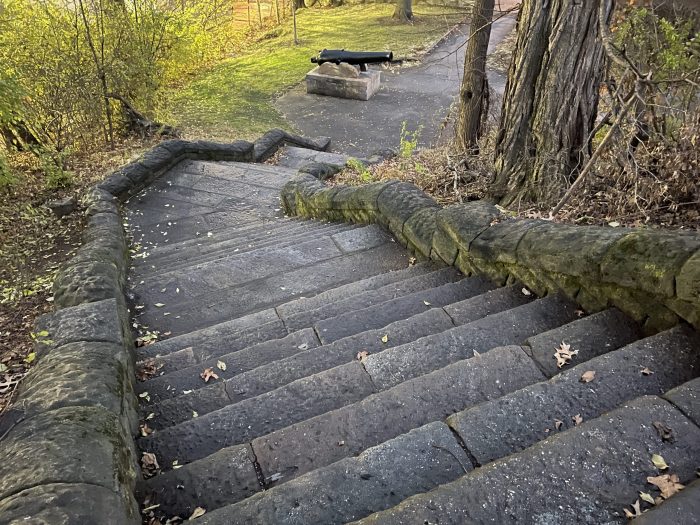 These steps lead to the ballfields where the lab once stood.

In 1926, nine acres of what once was the arsenal grounds, including the former lab became a community park named Arsenal Park. The site of so much bloodshed is now a ball field. In fact, unless you have a keen eye you wouldn’t know the park’s dramatic history. 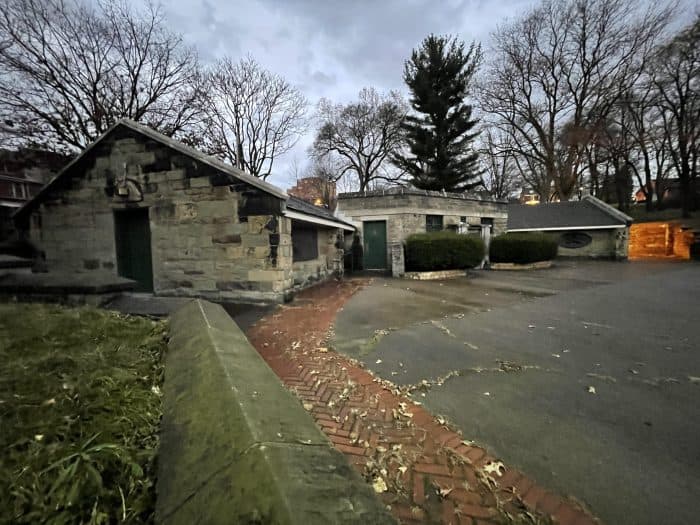 Located in the corner of Arsenal Park is the former arsenal powder magazine. Plaques on the building signify its historical significance.

However, to the careful observer, you might notice a small unassuming building at the corner of the property. This was the former powder magazine for the arsenal where the gun powder was stored. 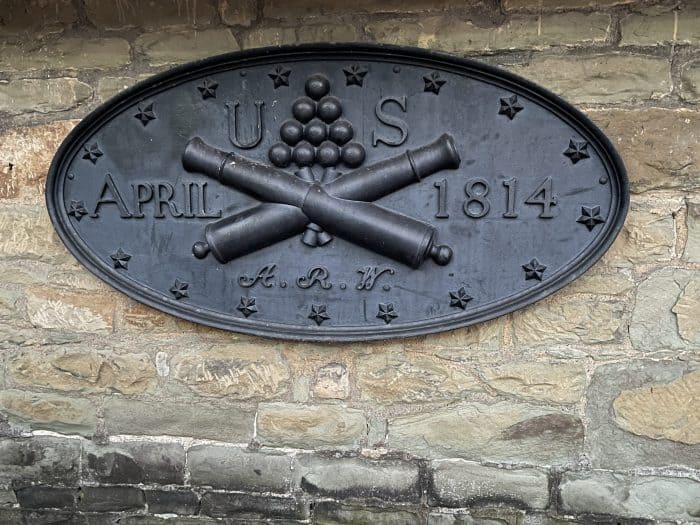 A plaque on the powder magazine that was at one point on the arsenal.

This building has several architectural plagues on it signifying is historical standing. 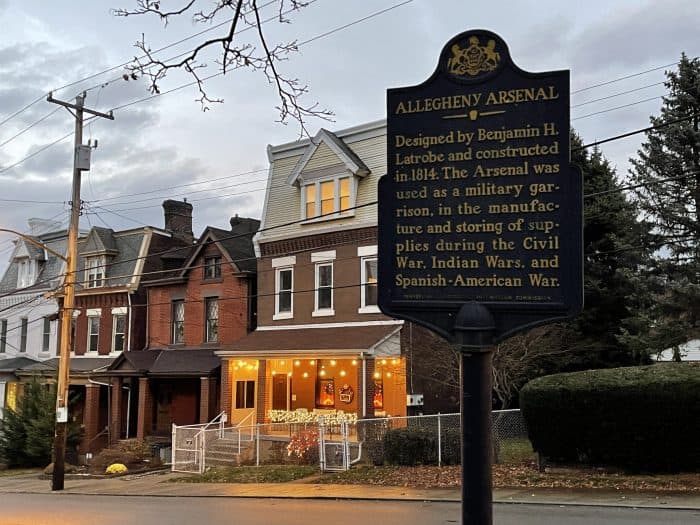 A Historical Plaque about the Allegheny Arsenal tragedy located along Butler Street.

Unfortunately, there aren’t any other plaques or markers (aside from the PA historical marker) that describe the site’s significance.

In recent years, the Lawrenceville neighborhood has been rapidly developing and in 2017, during the construction of a high-rise development, workers discovered a hidden supply of over 800 ordinance rounds from the old Arsenal site. 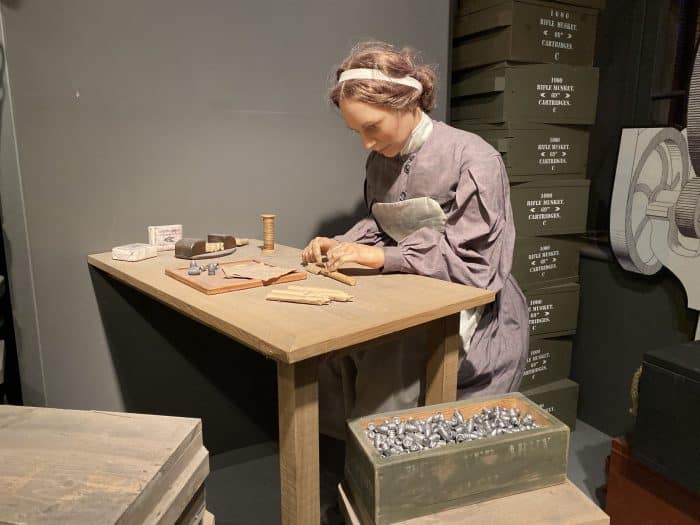 A display about the Allegheny Arsenal located at the Heinz History Center.

There is a display about the Allegheny Arsenal and the tragedy at the Heinz History Center in the Strip District. Some of these discovered rounds are on display there as well as at Soldiers and Sailors Museum in Oakland.

Legacy of the Allegheny Arsenal

Many people don’t know the dramatic role Pittsburgh played in both the Civil War as well as the push for change when it came to workers’ rights.