When it comes to skiing in the Laurel Highlands, most people think of the big three ski resorts: Laurel Mountain, Hidden Valley, and Seven Springs. What many people don’t realize is that in addition to those three current resorts is that there were several other popular resorts at the time, including White Mountain Ski Area. 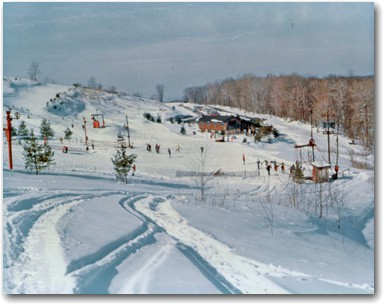 A view of White Mountain Ski Area approaching the lodge, presumably from the Great White Way slope. Several of the lifts and tows are visible.

White Mountain was located just west of Seven Springs on Pritts Distillery Road. It opened in 1963 when two investors got together to purchase the property that would eventually become White Mountain. Within two years, Pittsburgh attorney, Ben Haseltine bought out the other investor to become the sole owner. 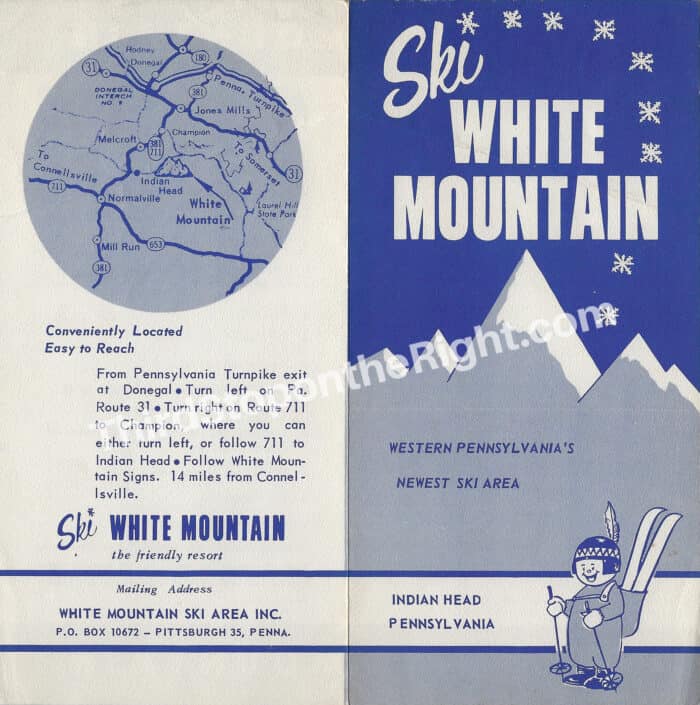 A brochure announcing the opening of White Mountain Ski Area.

White Mountain was run as a “mom and pop shop.” The slopes were only open Friday, Saturday, and Sunday as the owners also held full-time jobs. Mr. Haseltine sold the lift tickets and ran the rental shop, Mrs. Haseltine ran the snack bar, and some locals helped with the maintainence and operating the lifts.

A newspaper article from the December 13, 1962 edition of The Pittsburgh Post Gazette announcing the opening of White Mountain Ski Area.

Speaking of lifts, White Mountain had a 1750-foot-long Poma lift as well as two rope tows. According to an article by The Pittsburgh Post Gazette, there were plans to add a double chair lift for the second season, but that plan never materialized. At some point, a T-lift was also added. The wide, main slope was called Great White Way. There were also three trails, all exceeding 2,300 feet. White Mountain, like Plateau de Mont and Bear Rocks, didn’t have any snow-making equipment and was at the mercy of Mother Nature.

A main lodge, which was built entirely from local materials, provided skiers the opportunity to visit the snack bar, use the restrooms, and have a place to eat. There was also a massive stone fireplace that they could warm up in front of. 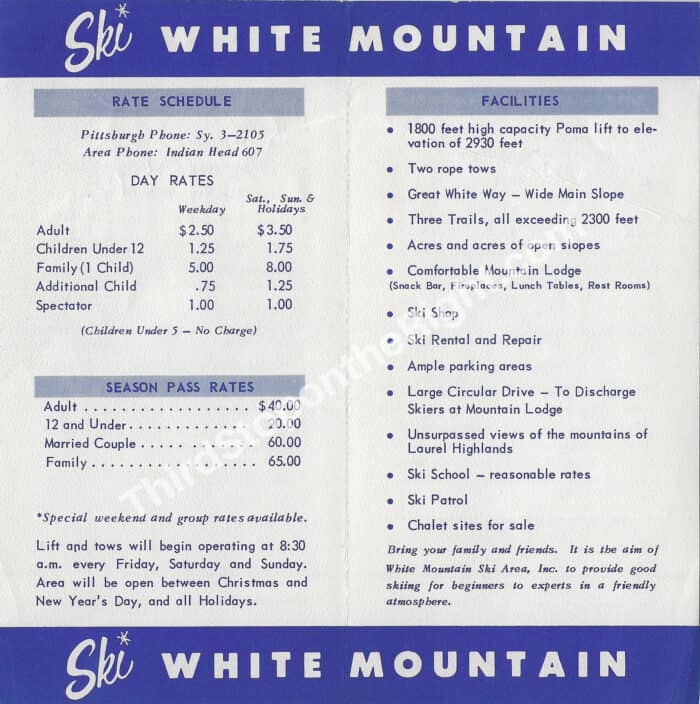 Skiing at White Mountain would begin at 8:30 a.m. on Friday morning and run through Sunday evening. Daily rates were $3.50 for Saturday, Sunday, and holidays, while Fridays were only $2.50. Individual season passes were $40.00.

The ski resort operated through the 1978-79 season. Despite its closing, the land was continued to be used informally for cross country skiing and those who didn’t mind ungroomed slopes. The lodge ended up becoming used as a private residence.

The Poma lift and T-lift are long-gone, but within the past 10 years the remnants of the rope tow were still visible. Vegetation had started taking over when some individuals who wanted to see the place saved began cutting some of the old trails and mowing the main slope.

If you happen to be skiing at Seven Springs and using the Gunner Lift, which services the Lost Girl Trail, you might be able to catch a glimpse of the old White Mountain Ski Area. The slopes are located to the left of the big white mountain top that first grabs your attention.

While White Mountain may not operated as a ski area anymore, many have fond memories of the place as is evidenced by the comments section on the DCSki page.

If you are interested in other former Laurel Highlands ski resorts, check out this post about the former Plateau de Mont which was located near Hidden Valley!