There is something fascinating about ancient Egypt. The fact that they were so far ahead of their time never ceases to amaze me. What is even better is that the Carnegie Museum of Natural History here in Pittsburgh has its own Ancient Egypt exhibit. 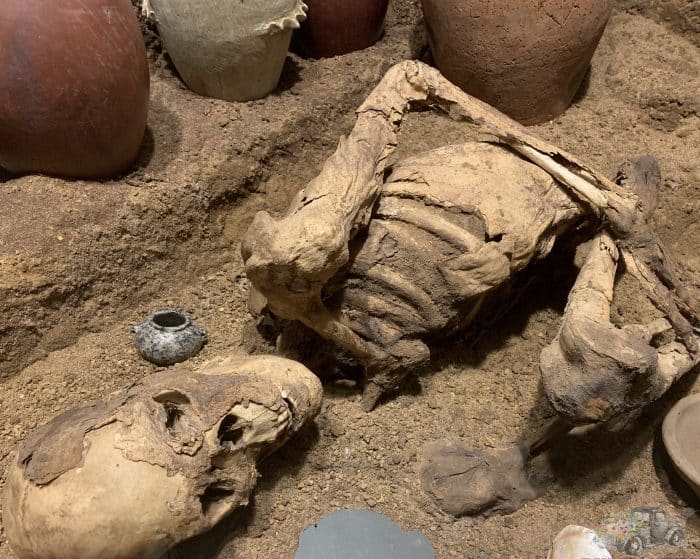 Now, this is by no means the largest or most elaborate display of Egyptian artifacts I have ever seen, but being in a smaller city such as Pittsburgh it’s pretty impressive. Artifacts such as the funerary boat, statuaries, and tools were interesting, but what really steals the show are the mummies.

The Beginning of the Ancient Egypt Exhibit at the Carnegie

The Carnegie Museum of Natural History may be known for its dinosaurs, but it all started with a mummy … 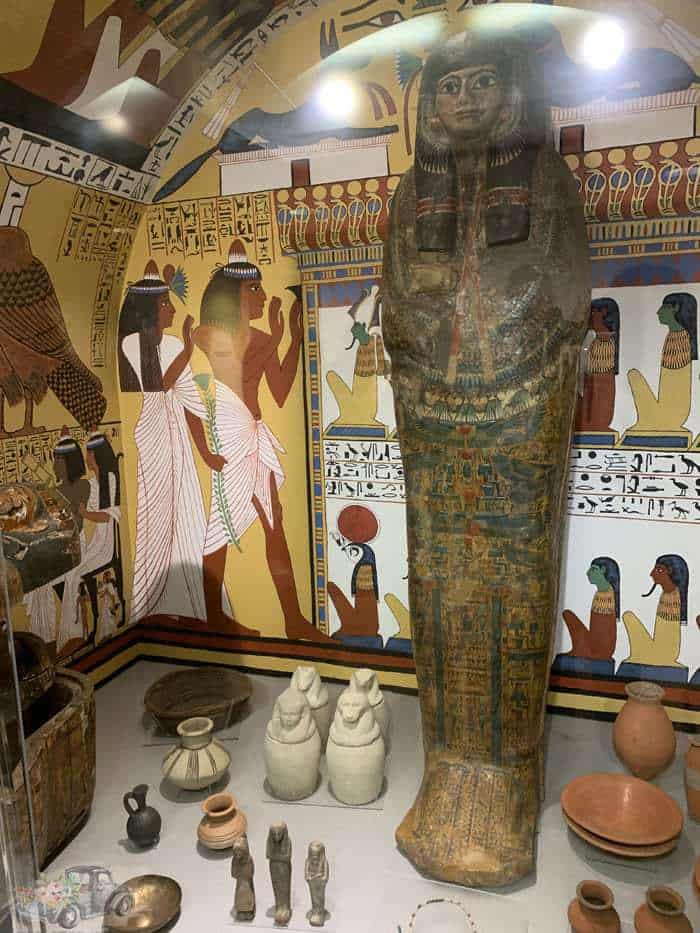 When Andrew Carnegie began collecting artifacts for his natural history museum, the first artifact he acquired was a female Egyptian coffin  that belonged to a chantress of Amun, who was probably a temple singer. This was designated acquisition 1-1 and was the start of the museum. Unfortunately, in recently years the mummy began to decompose which led to it being sent to New York for it to be refrigerated and preserved. The coffin remains at the Carnegie in a reconstruction of the tomb of Sennedjem.

The Mummies of the Ancient Egypt Exhibit 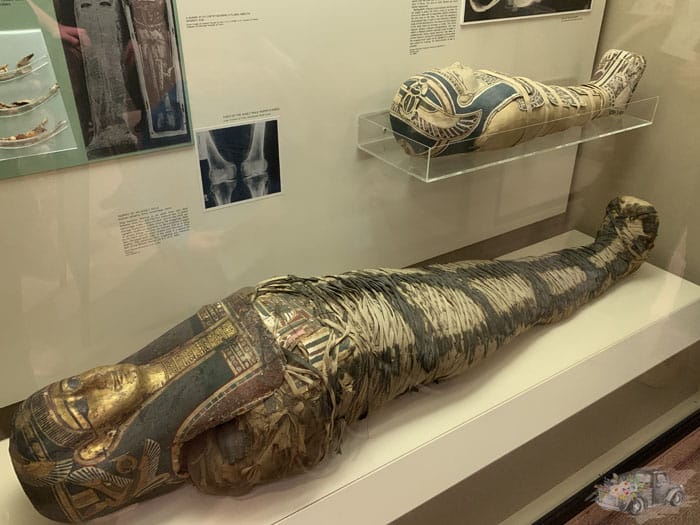 Ok, let’s be honest, the ancient Egyptians knew a thing or two about death. Well, maybe not everything as they thought people thought with their hearts and our brains were just there to keep our skull from collapsing. They were, however, the predecessors of embalming and they did know how to go out in style.

I had a chance to chat with one of the volunteers and I asked about the mummy collection in the Ancient Egypt Exhibit. She said that the artifacts in this exhibit were not ones that Egypt wanted back, mainly because they were from the Roman Period and were not unique. The Roman Period mummies weren’t as exquisetly done as pre-Roman era mummies and sarcophagi. This is how the museum was able to acquire these particular ones. 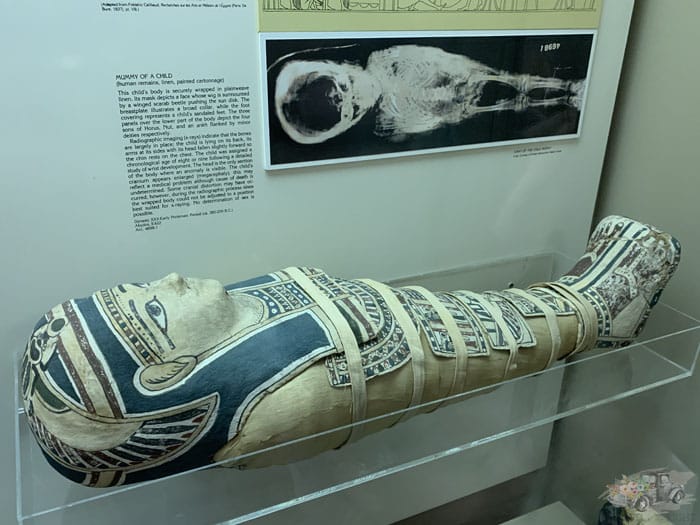 Finding an in tact child mummy was rare.

Finding mummies of children is rare, particularly because, aside from royalty, great importance was not placed on deceased children. There were usually just buried in the desert like much of the rest of the Egyptian population. This child, which is estimated to be about three when he died, was very obviously wanted and loved — and also from a wealthy family. In fact, they didn’t make wraps for children, so the wrap the child mummy is in was actually made from one designed for a women. If you look closely it was cut and pieced together in order to fit.

Not much was known about the child mummy until it was examined in 2007 using a CAT scan (similar to the dromedary display in the downstairs). After examination it was determined that the mummy was a boy, but a cause of death was undeterminable. 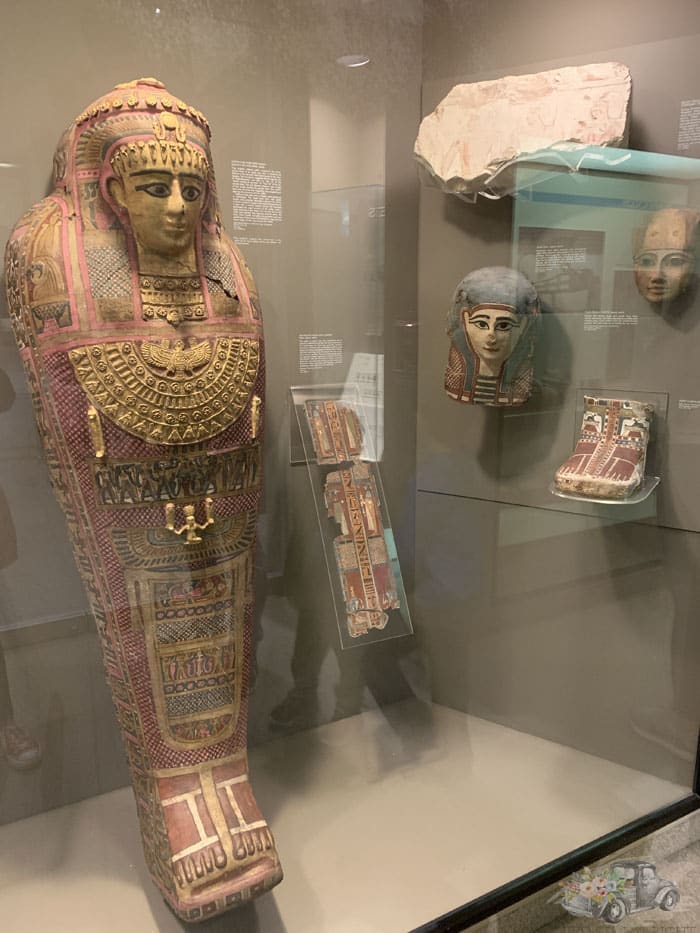 These mummies are examples of mummies from the Roman Period.

The museum has a fantastic example of a Roman Period mummy and sarcophagus. This one was from the time when Egypt was part of the Roman Empire (30 BCE – 395 CE) and features lots of gilding and pink and purple paint. 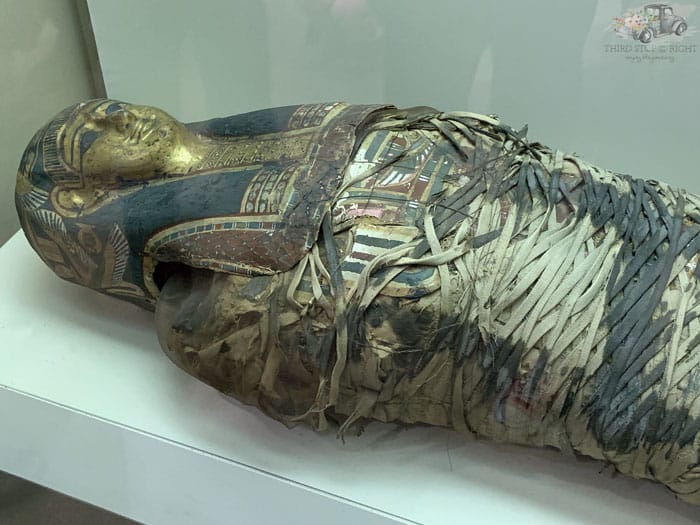 If you look closely you can actually see the fingers of the mummy which were crossed over the shoulders.

I don’t know how many times I have seen the mummy of an adult male, who died when he was between 35 and 55. A gilded mask covers his face and you can see the layers of wrapping and ties around the body. 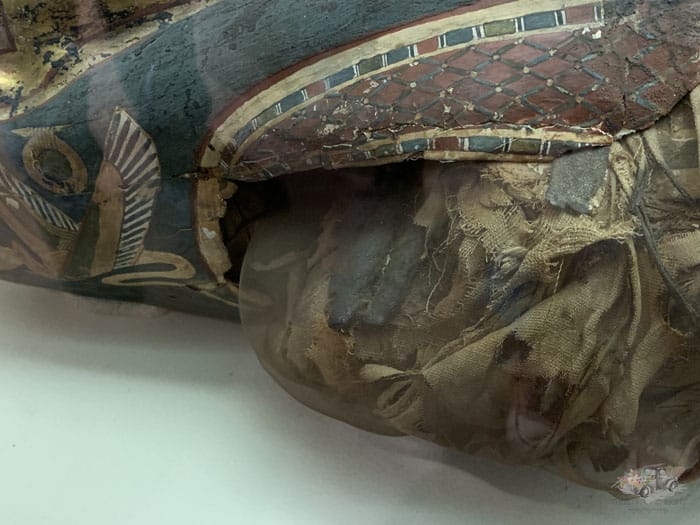 The fingers are visible in a section where the fabric wrap has rotted away.

What I never realized, and a guide pointed out, is that you can actually see the mummy’s fingers! I kid you not. If you look closely at the mummy’s right shoulder you can see an area where the wrapping was damaged by robbers looking for jewelry and three black fingers are visible.

The guide explained to us that the black on the fingers is not from decomposition, but it actually because the body was covered with tar — a mummification process that took place during the Roman Period. When I was in Russia and visited the Hermitage Museum, I was able to see an unwrapped mummy but this is the only time I have seen anything like that in my adult years.

The Ancient Egypt exhibit at the Carnegie is absolutely something that you should see regardless of whether you are a longtime Pittsburgher or a visitor of the city. There is always something new to learn at the museum so even if you have been there before be sure to make a visit part of your to-do list.