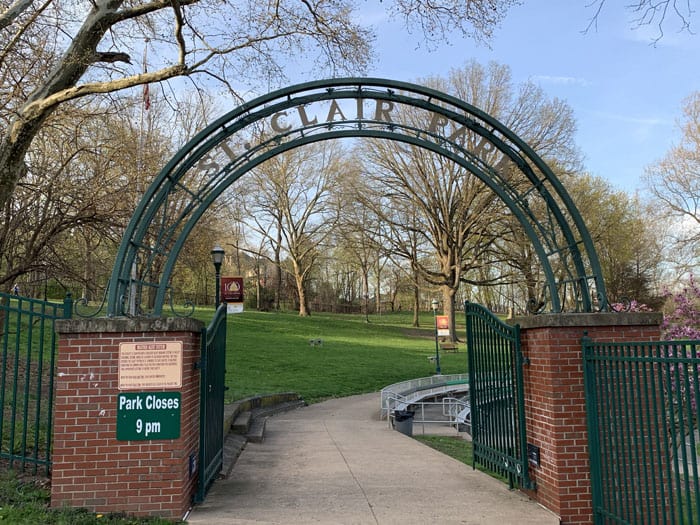 Right now in downtown Greensburg, off of Maple Avenue, is St. Clair Park. This unassuming city park is probably best known for its annual SummerSounds outdoor concert series held at the Robertshaw Amphitheater each summer. However, there is more history to this park than meets the eye.

Last week we had a beautiful evening so I took the boys over to the park for some exploring. What some people don’t realize is that at one time St. Clair Park was actually St. Clair Cemetery as well as the Presbyterian graveyard.

I remember going on an elementary school field trip to St. Clair Park and learning about its past as a cemetery. As the story goes, the city cemetery was “the” place to be buried if you were a Protestant — that is until the borough banned cemeteries in 1888. At that time most, but not all, graves were moved to other cemeteries — most notably St. Clair Cemetery (of the same name) located two miles east in Hempfield.

Interestingly, a Catholic cemetery was also located on North Main Street and was also moved east of town.

The Grave of Arthur St. Clair 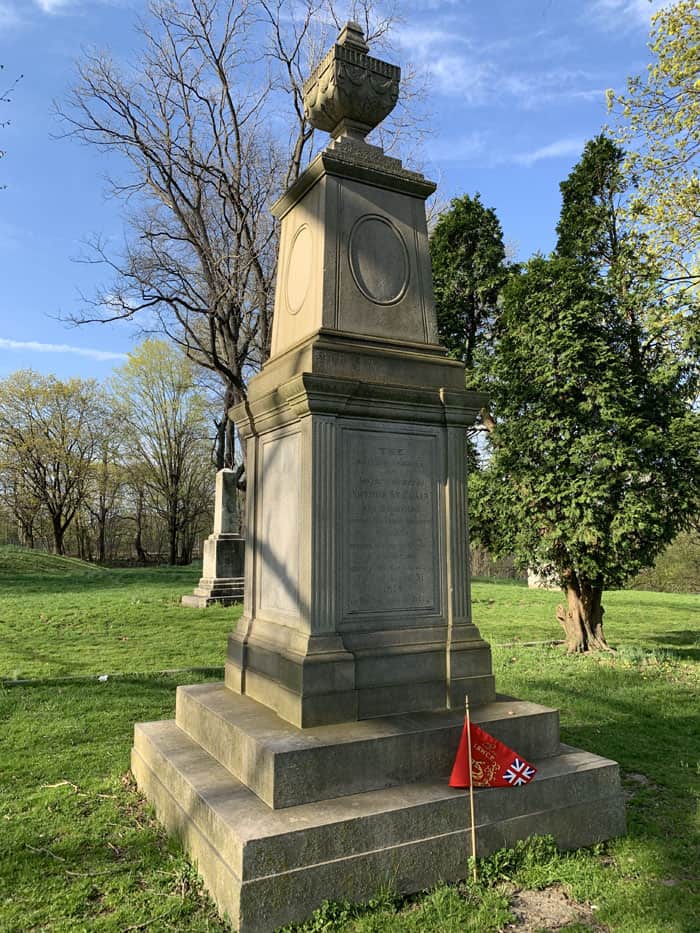 The grave of Arthur and Phoebe St. Clair in Greensburg’s St. Clair Park.

The most notable headstone still remaining in the park is that of the park’s namesake, Major General Arthur St. Clair and his wife Phoebe. When St. Clair died in 1818 from injuries he sustained from falling off a wagon he was deep in debt. His wife died 18 days later and they were buried in the old St. Clair Cemetery. In 1832 a sandstone headstone was added to the grave. 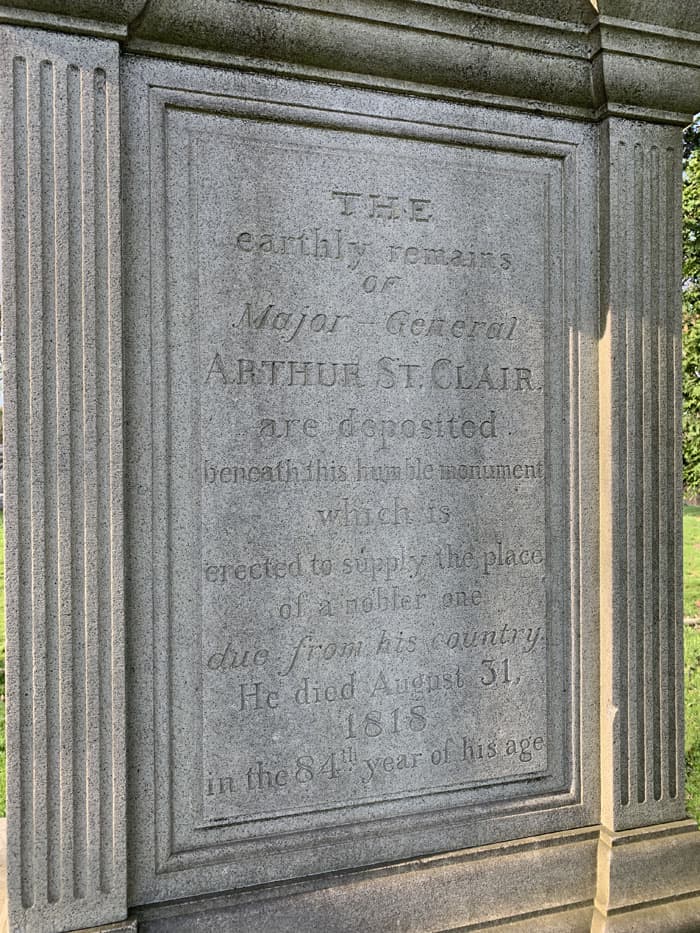 The inscription on the grave of Arthur St. Clair.

Over 75 years of exposure to the elements deteriorated the original headstone and in 1913 local Masonic members erected the site’s current granite marker. 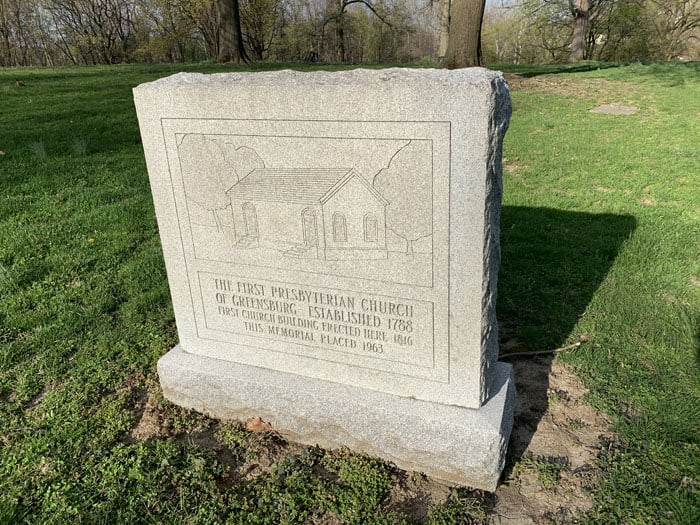 The granite marker shows the spot of the first location of the First Presbyterian Church in Greensburg which was built in 1816.

At one time, St. Clair Park was also home to the First Presbyterian Church of Greensburg which was established in 1788. The first building was built on the site in 1816 and the congregation remained at that location until 1883 when the congregation move to its Main Street location. 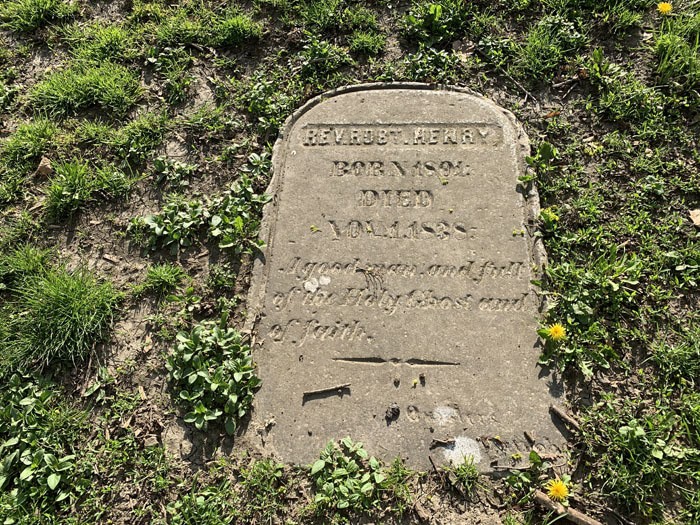 Interestingly, the third minister of the church, Reverend Robert Henry was married to a sister of James Buchanan, who would eventually become President of the United States. Rev. Henry’s grave can be found right behind the marker for the original church. 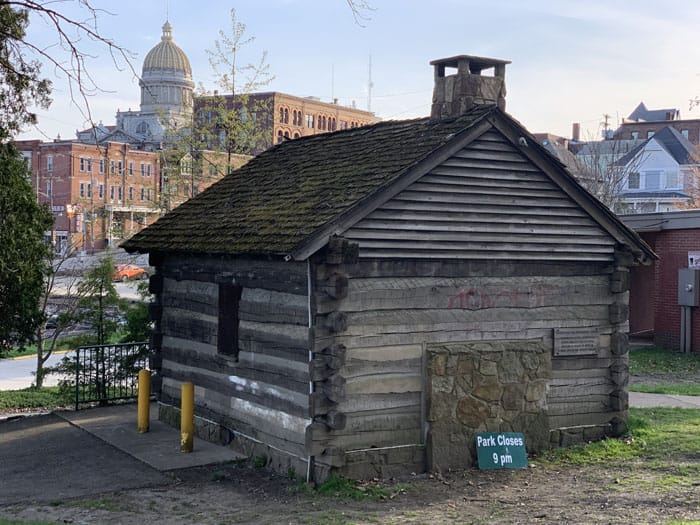 Also of note is the reconstructed log cabin from 1783. This cabin was rebuilt using materials from an original building which was used for a school as well as a place of worship for the German Lutheran and Reformed Churches.

The inside isn’t accessible but it would be nice if they could somehow incorporate it into the history of the park.

The Remaining Graves in the Park

Now, let’s talk about the park’s biggest mystery — those graves that remain. From that field trip, I was under the impression that the graves that were able to stay in the park belonged to those that had the money to do so. 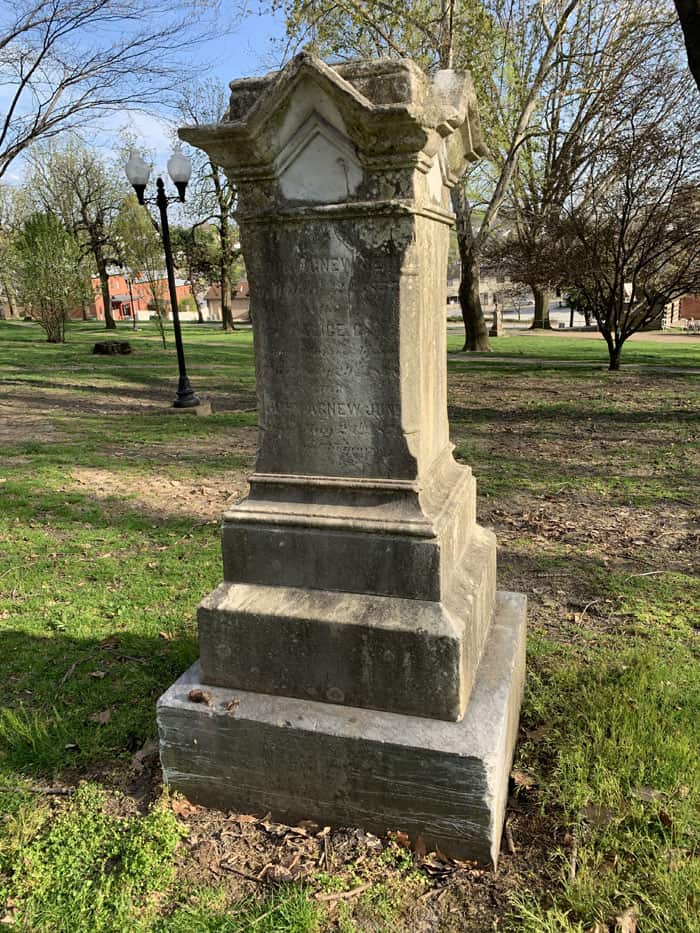 Now that I’m older I realize that that can’t possibly be the case. If it were so, we’d be seeing more Huffs, Coulters, and Barclays. However, they were all buried in the new St. Clair Cemetery along with other local notables such as U.S. Senator Edgar Cowan and coal and coke industrialists from all of the local patch towns. 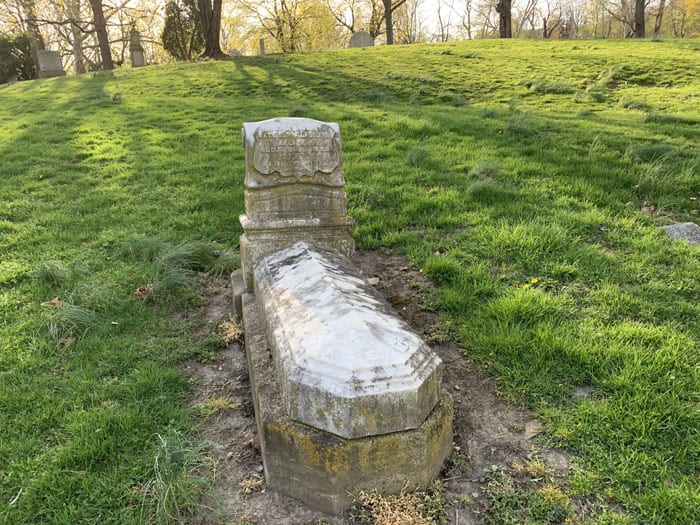 This has lead me to think that maybe the reverse was true. Maybe in order to move to the new cemetery you have to have money and those left behind either didn’t have the money or the family to move them. This would make sense as there aren’t a good many markers left. The ones that do remain seem to be older and made of sandstone, making them difficult to read.

How I Came To This Conclusion

Considering Arthur St. Clair’s grave is one of the ones that remained gives credibility to the argument that one would have to have had money in order to have had their Earthly remains moved. (St. Clair died penniless, remember?) 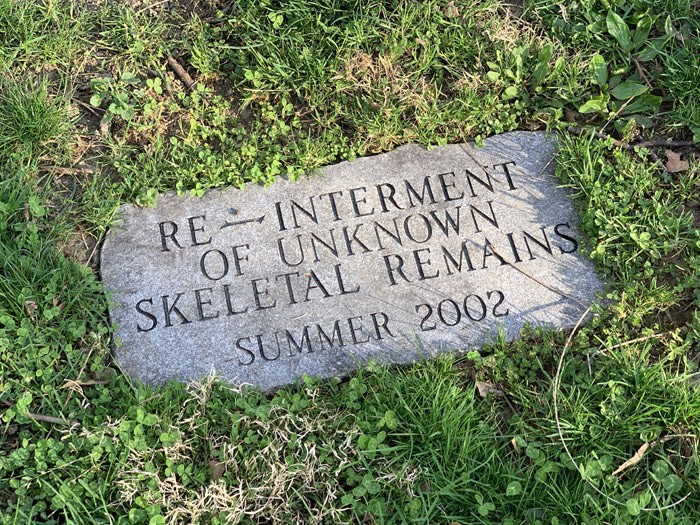 A stone marking the place where unidentified skeletal remains were found in 2002.

Additionally, in 2002 while renovating the walking trails, workers discovered unidentified skeletal remains. This probably points to the fact that there are even more unmarked graves belonging to individuals who could not afford headstones.

Lastly, it seemed that in its later years that the old St. Clair Cemetery wasn’t such a desirable place to be laid to rest. According to the 1906 History of Westmoreland County by John Boucher, he states:

For many years the largest and most beautiful cemetery in Greensburg was the St. Clair cemetery, named in honor of Major General Arthur St. Clair. Formerly a part of it had been known as the Presbyterian graveyard, and this was enlarged by a donation from William Jack “to the burgesses and inhabitants of Greensburg.” This deed was dated April 18, 1803, and is recorded in Deed Book No. 7, page 108. The purposes of the ground was to secure for Greensburg a place to erect a house of worship, and the residue was to be used as a burial place for the dead. The Presbyterians for many years occupied a building on this ground as their place of worship. The cemetery was very much admired in former years, and many of Greenburg’s eminent citizens were finally laid to rest within its borders. In 1888 the place was abandoned as a place of sepulture and a new cemetery bearing the same name was opened about two miles east of Greensburg, since which time the old cemetery in Greensburg has been badly neglected. Both the old and new cemetery have many pretty monuments, and the new one is kept in splendid condition and is a delightful cemetery location.

The true reason for the graves that were left in the Park seem to have been lost to time, however it is interesting to speculate on the circumstances which lead to their abandonment. Whatever the reason, they have now become a part of downtown Greensburg forever.

My great great patents James and Julia Ann Biggert along with their son James and his wife Sarah are still buried at the back of the park. Each has a flat marker on the side of a small slope. They had family but i believe no money to be moved but that is just a guess. Other family in St Clair Cemetery died after these folks. Imagine my surprise when i found them in a city park.

I was raised in Greensburg, I went to school there at The Cathedral and Greensburg-Salem. I then went to Seton Hill. When I graduated from college, I moved to Cincinnati and it was great to know and connect Western Pennsylvania history ane western Ohio history. Society of Cincinnati Cincinnatus statue at Sawyer Point Park. Cincinnati (originally named Losantiville)

On January 4, 1790, Arthur St. Clair, the governor of the Northwest Territory, changed the name of the settlement to "Cincinnati" in honor of the Society of the Cincinnati, of which he was president,[2} possibly at the suggestion of the surveyor Israel Ludlow.[13] The society gets its name from Cincinnatus, the Roman general and dictator, who saved the city of Rome from destruction and then quietly retired to his farm.[3][d] The society was composed of Continental Army officers of the Revolutionary War.[3] If anyone is interested in his place in the history of both states and their connection,this written history will be very interesting to you.

Thank you so much for this information...I enjoyed reading it as I was taken here by F.B.

IN 1957 I went to the Cathedral grade school and lived on Alwine Avenue. We would walk through the alley and cross Pittsburgh st and go through the brick alley to take the shortcut through the St Clair Cemetery. It always scared me as a first grader walking through there. We would go really fast ! Years later we would cut through the cemetery and take the tracks to Lynch field to go swimming or go across the tracks and cut over.

Mary Ellen Kistner??? I lived on Alwine Ave., too, in a house your family owned! What I remember about St. Clair Park was the park movies in the summertime, every Tuesday, I believe. Even more memorable were a few times when I was a little girl that my mom took me and my sister to the park for a picnic under one of the big trees. The occasion was always fresh cherry season. Mom loved them, would get a big bag and we'd all share.

Arthur St. Clair, among his many other claims to fame -- and probably the one most pertinent here -- was one of the first County Commissioners of Westmoreland County, back in the early 1770s, before the Revolution.

That was back when Westmoreland's territory covered the entire area west of the mountains and south of the Ohio River, including what's now the Point, Pennsylvania's claim overlapped with Virginia's and there was much confusion (and even some actual warfare! The burning of Hanna's Town was one incident in that war.) until the Continental Congress got the two states to agree to have the border surveyed, basically by extending the Mason-Dixon Line which had been begun before the Revolution to settle a similar dispute between Pennsylvania and Maryland.