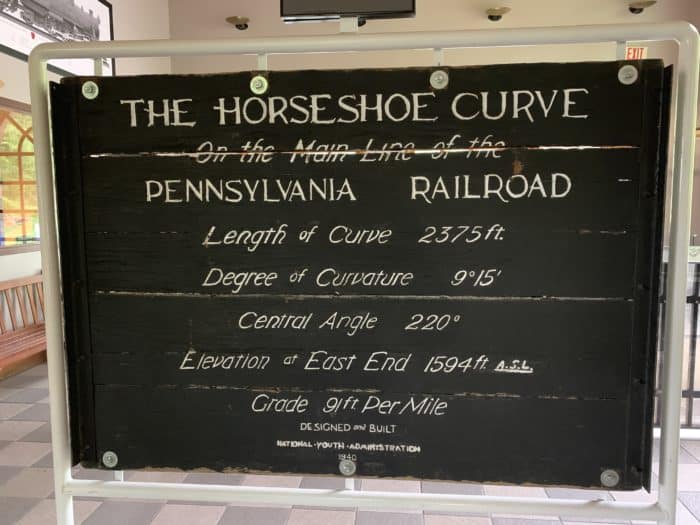 If you have ever been to Altoona, Pennsylvania you have probably figured out that the town has a rich history with railroading. This history is evident not only by noticing the current rail industry in the town, but also the many references that can be found regarding railroaders, railroading, and of course, the famous Horseshoe Curve.

In the mid 19th century when industry in Pennsylvania was really beginning to take off, industrialists were faced with a problem — they were losing the rail wars.

At that time it was taking four days to get from Philadelphia to Pittsburgh by way of the Allegheny Portage Railroad, but on the New York Central Railroad it was taking a mere 16 hours to get from New York City all the way to Chicago. Meanwhile, Pennsylvania was using a complex system of canals, horses, stationary steam engines, and rail cars to get people to where they needed to be. It was then decided that something must be done.

To deal with this issue, the Pennsylvania Railroad was incorporated in 1847 to build a railroad from Harrisburg to Pittsburgh. To get trains directly up the Allegheny Mountains would be nearly impossible, so engineers developed a series of curves to gradually increase the trains’ elevations. Horseshoe Curve was the most dramatic of these. 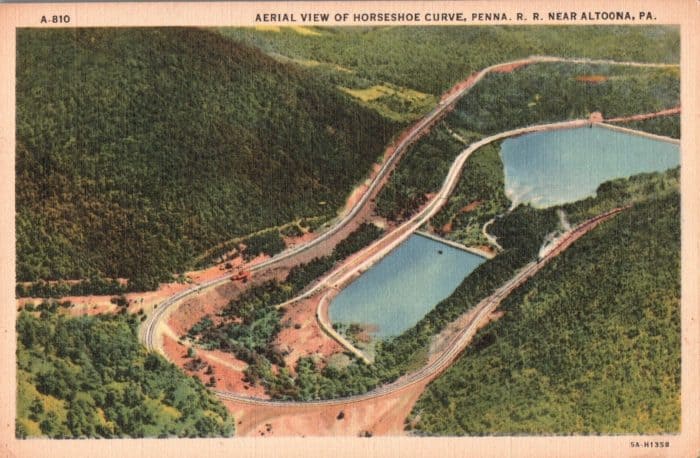 This aerial view of Horseshoe Curve shows just what a massive undertaking the project was — especially with no heavy machinery.

What is truly amazing about Horseshoe Curve is that no heavy machinery was used to create it. It was done completely by men with picks, shovels, horses, and drags. The line opened for rail traffic on February 15, 1854. Eventually, an observation deck was added in 1879 because there was so much interest in the site. 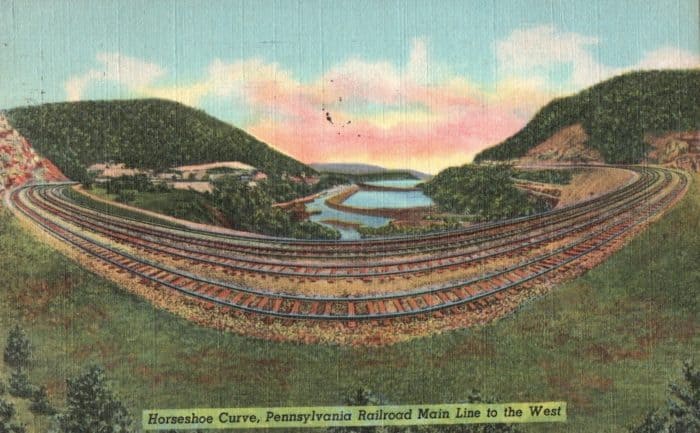 Just one of the many postcards produced of Altoona’s Horseshoe Curve. 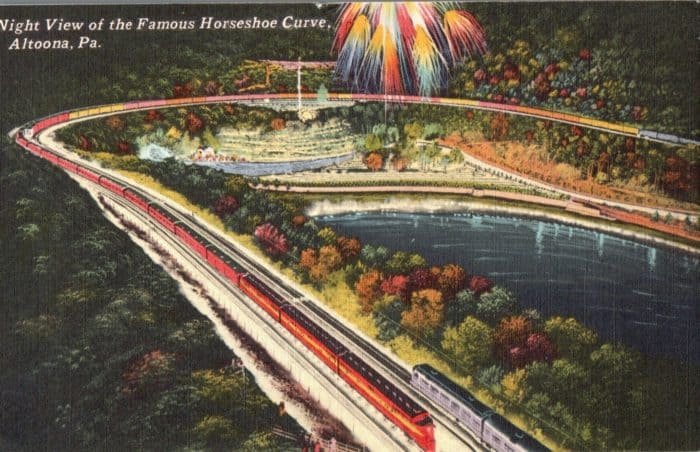 To celebrate Horseshoe Curve’s centennial celebration in 1954, a night photo was arranged by Sylvania Electric Products which used 6,000 flashbulbs and 31 miles of wiring to illuminate the area. This event also commemorated the 75th anniversary of the incandescent light bulb.

In World War II, Horseshoe Curve played a vital role in moving troops and material for the Allied war effort. Since it was such an important asset, the Curve was under armed guard at all times. This didn’t deter some though …

Eight Nazi spies landed in German submarines in 1942 along the coasts of Florida and Long Island. They were carrying explosives, $169,000 in US currency, and plans to sabotage key industrial, utility, and transportation sites — including Horseshoe Curve. Fortunately, they were apprehended by the FBI before their plan could be set in motion. 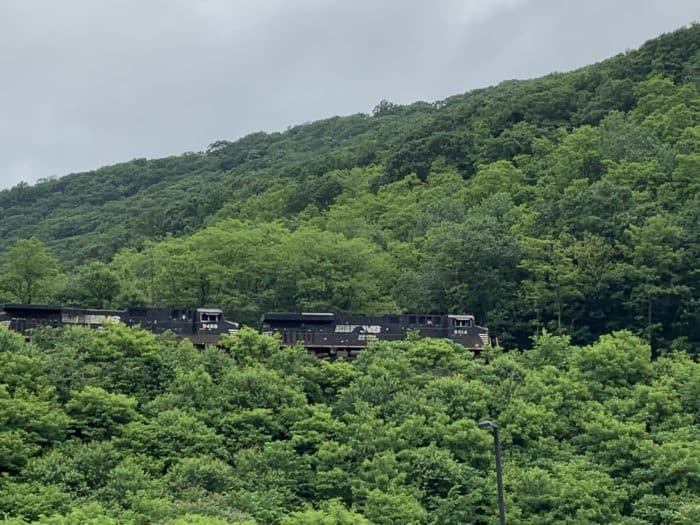 A view of a train coming around the bend into Horseshoe Curve.

When I was attending college in Altoona, I would often take the train back and forth to Greensburg so I got to see Horseshoe Curve by train but it wasn’t until years later I actually went to the observation deck to watch the trains. 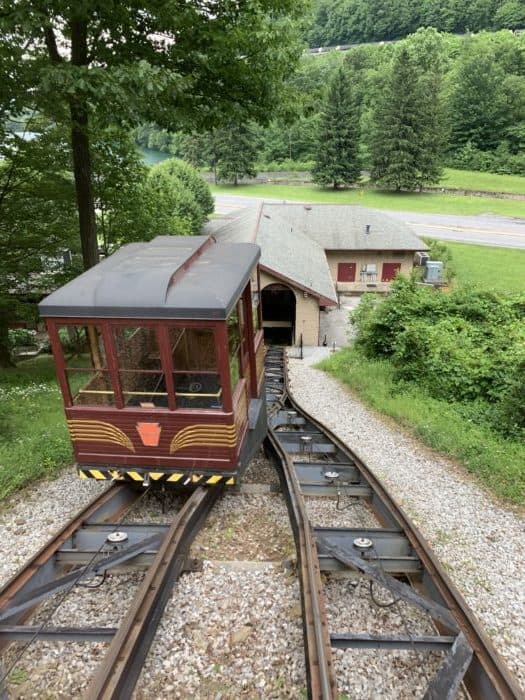 The funicular descending from the observation deck at Horseshoe Curve.

Horseshoe Curve is managed by the Railroaders Memorial Museum (located in downtown Altoona) and features a visitors center at the bottom of the hill leading up to the Curve which tells the story of the Curve and has historical artifacts and memorabilia on display. Then it is up to you to take a funicular to the top of the hillside or brave the 194-step stairway.

For those who are wondering, a funicular is similar to an incline except it is single-tracked with the cars passing halfway up the slope.

At the top of the hill is a large grassy area giving you a panoramic view of Horseshoe Curve as well as the ravine and reservoir below. This is the area where rail fans gather in anticipation for oncoming trains. Trains are announced over speakers and usually at least one person has a radio. With the frequency of trains on the three tracks, most visitors wait no more than 20 minutes before seeing train. 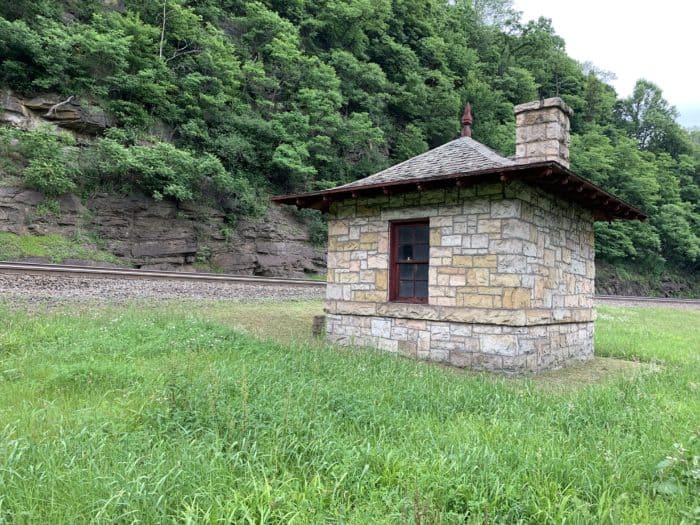 A former guard shack harkens to the days when armed guards used to patrol the Curve. 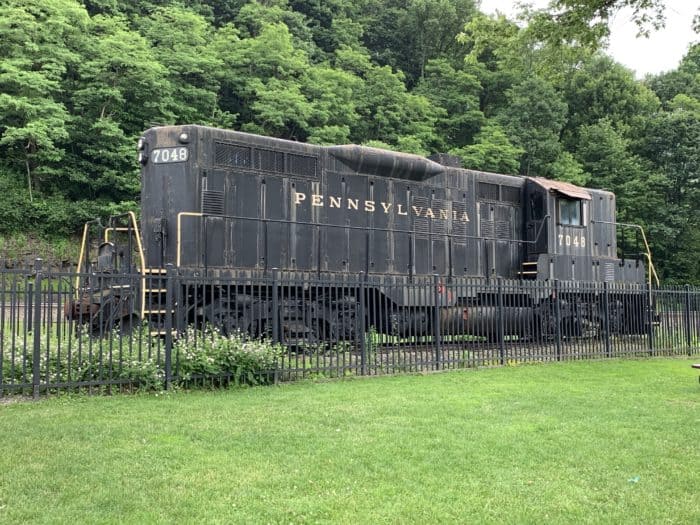 A diesel engine is on display at the observation deck.

There are picnic tables in the area so it makes for a really nice place to have lunch and wait for the trains to pass by. If you are visiting with children, you will enjoy seeing the diesel locomotive on display in the observation area as well as the former guard shack.

After visiting Horseshoe Curve, be sure to head into downtown Altoona to visit the Railroaders Memorial Museum to learn how the Pennsylvania Railroad built the city of Altoona into the railroad capital of the state. Horseshoe Curve is open for visitors from April through October and the railroad museum is open year-round. Visit the Railroaders Memorial Museum website for a full list of operating house and more information.