It’s a bizarre story that has ties to both Monroeville as well as Lawrenceville’s former St. Francis Hospital. The story starts on November 23, 1963 when legendary pianist and entertainer Liberace was planning on performing a show at the now-gone Holiday House supper club in Monroeville.

The morning of November 23, Liberace felt that he needed to have a few of his trademark stage costumes dry cleaned. When the outfits couldn’t be sent out due to time constrains and the fact that Pittsburgh was experiencing a snow storm, Liberace decided to take matters into his own hands and asked for a bottle of dry cleaning solution to be delivered to his room.

After spending the day using the cleaning solution, which contained carbon tetrachloride, Liberace began feeling dizzy and wasn’t able to complete his show. He was rushed to St. Francis Hospital in Lawrenceville where he started experiencing renal failure.

He was given a 20 percent chance of survival.

A Miracle at St. Francis? 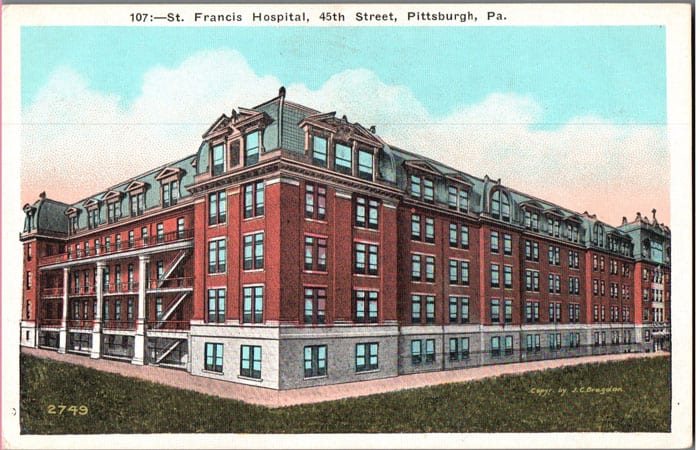 St. Francis Hospital was where Liberace received treatment and also were he reportedly encountered the nun dressed in white who told him to pray to St. Anthony.

The situation was so dire that a priest actually administered last rites to Liberace. It was at this point that Liberace recalls being visited by a nun, dressed all in white, who told him that he should pray to St. Anthony for healing. Being out of many other options and already on dialysis, Liberace started to pray and slowly he began to recover.

After Liberace began to recover, he started asking around for the nun in white who had visited his hospital room. The problem was, no one could be found who matched the description of that nun and none of the Sisters of St. Francis who worked at the hospital wore all white. Liberace thought maybe he was heavily sedated or maybe he was hallucinating from fever, but whatever (or whoever) visited his room remains a mystery to this day.

In 1986, almost 23 years after the night Liberace almost died, the Liberace Lobby, which served as the entrance to St. Francis Hospital, opened with Liberace in attendance — flamboyant costume and all. The lobby was a bit of a showcase to the hospital’s most celebrated patients — including a signed photo of the pianist.

The Liberace Lobby, and the rest of St. Francis Hospital went the same way as Holiday House, where Liberace was to go the show, and closed its doors on October 31, 2002. The hospital was extensively renovated and reopened as Children’s Hospital of Pittsburgh of UPMC in 2007.

While we may never know who the mysterious nun in white was, the strange case of Liberace and St. Francis Hospital is one to remember.

I've been to the BLESSED MOTHER SHRINE Bates St. Exit off Parkway North Oakland & I've taken friends there. Similar story about MYSTERY NUN only this time AT Mercy Hospital in the book Pennsylvania's Haunted Route 30 by Ed Kelemen. Chapter 7 page 23. Lots of the UNUSUAL 4SURE in this ???? Book. Have you ever seen ???? HOLY PITTSBURGH by Rick Sebek of WQED. I have 95 % of it recorded from the TV. That's all for now.