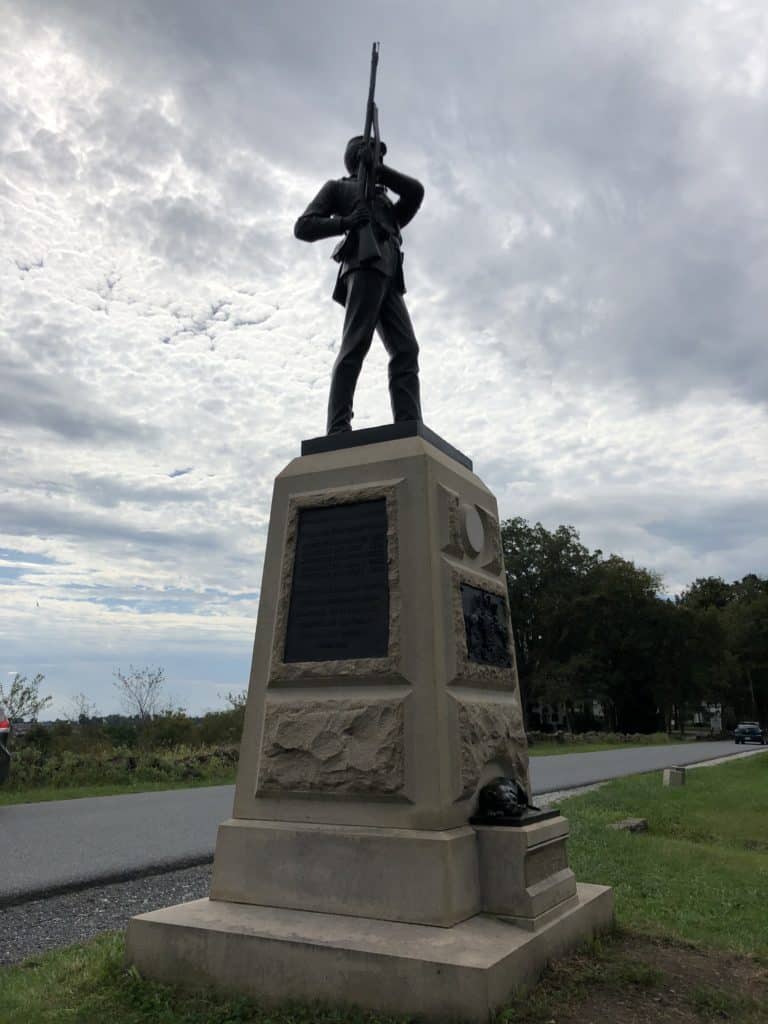 Today we are going back more than 150 years to the American Civil War, the 11th Pennsylvania Regiment, and one of the Civil War’s most famous mascots. Now, you might be wondering how the Civil War relates to Western Pennsylvania, and that I about to tell you.

While many of the famous battles of the Civil War such as Manassas, Antietam, Fredericksburg, and Petersburg took place in Virginia, only one major battle took place in Pennsylvania — Gettysburg. This didn’t mean that the western part of the state was affected though. In fact, every eligible man from all over the Union was signing up to fight — including men from right here in Westmoreland County.

Five companies from Westmoreland County were recruited to serve in the 11th Pennsylvania regiment including Company C from Latrobe; Company E from Latrobe and Ligonier; Company F from Salem; Company I from Greensburg; and Company K from Youngstown. Colonel Richard Coulter, a veteran of the Mexican War and a lawyer fro Greensburg was in command of the regiment. 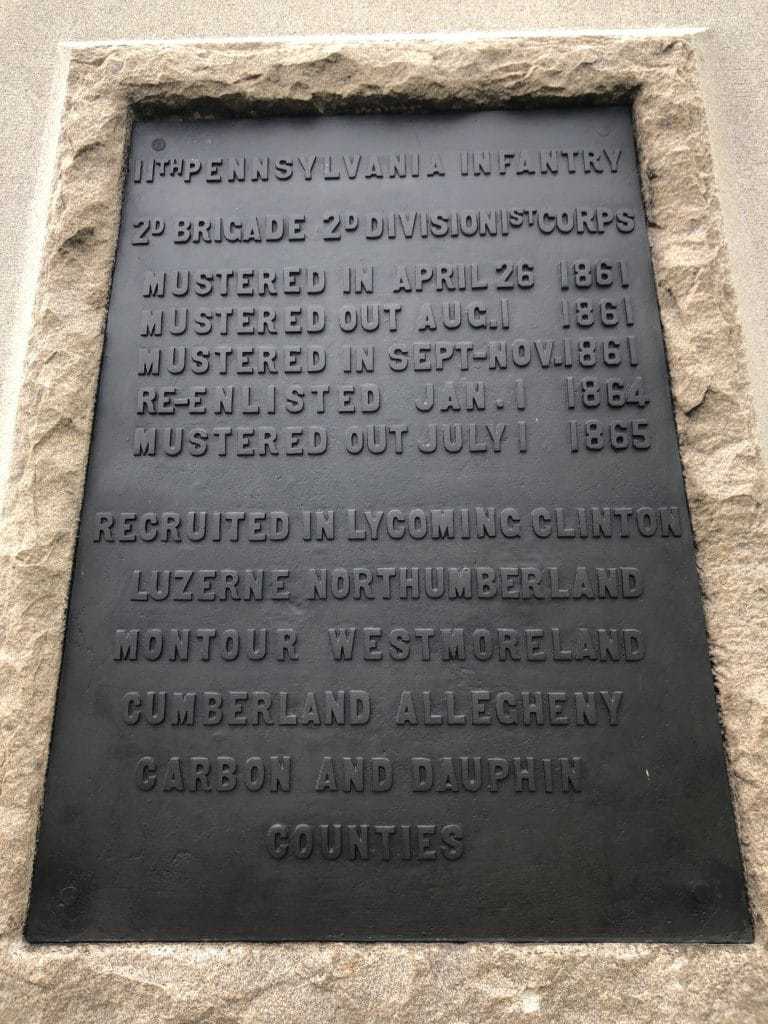 The rest of the regiment was made up from recruits from several other Western Pennsylvania counties.

At the beginning of the war, the volunteers signed up as a 3-month regiment, but after realizing that the war would last more than three months, the 11th was reorganized as a three-year regiment in August 1861.

After the Battle of Falling Waters, part of the Manassas campaign, the regiment was giving the nickname “The Bloody Eleventh.” 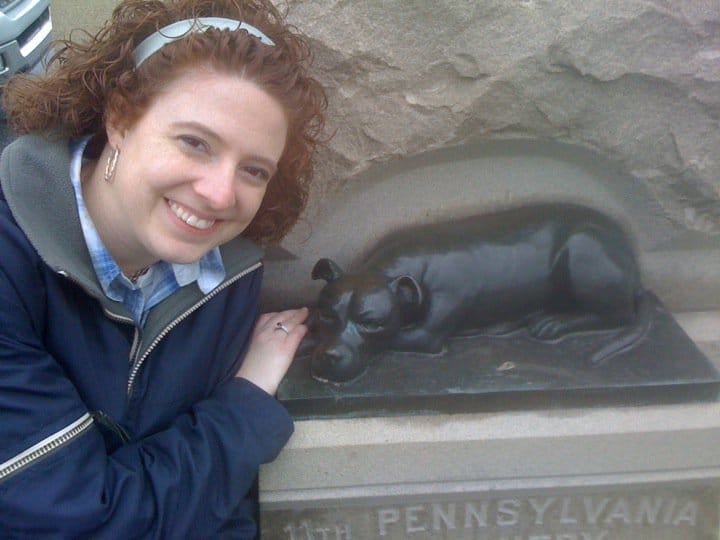 Of course, there is something interesting about the 11th Pennsylvania besides the fact that they were from Westmoreland County. If you’ve ever visited the 11th Pennsylvania monument on Oak Ridge at Gettysburg National Military Park, you know that I’m talking about. This regiment actually had a mascot.

An American Staffordshire Terrier with a brindle coat, she was given as a puppy to Captain William Terry of Company I (remember, that’s the company from Greensburg!) when the regiment was training at Camp Wayne in West Chester. The puppy was named Sallie Ann Jarrett, and eventually became known as Sallie the War Dog.

Sallie Ann joined the soldiers at drills and established her place beside the color guard for dress parades. When the regiment left camp, Sallie Ann’s position was at the front of the march — right beside Richard Coulter and his horse. She was even known as “Dick Coulter’s dog” by other regiments traveling with the 11th Pennsylvania.

Even in the heat of battle, Sallie Ann didn’t back down but took a position at the front lines, barking furiously at the enemy. 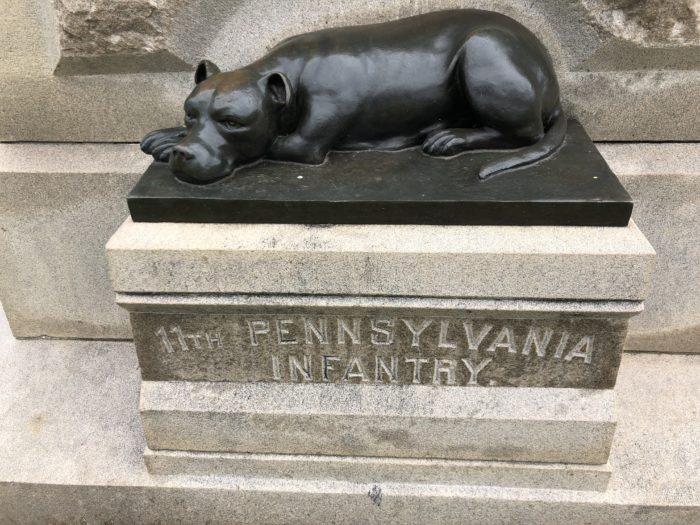 On July 1, 1863, the first day of fighting at Gettysburg, the 11th Pennsylvania fought at Oak Ridge before retreating to Cemetery Hill. During that time, Sallie Ann became separated from the regiment and the soldiers feared she had been killed.

Three days later she was found, still at Oak Ridge, weak and hungry. She had stayed watching over the regiments dead and wounded. She returned to the regiment and kept fighting with them until a few weeks before the end of the war.

On February 6, 1865 at Hatcher’s Run, Virginia, Sallie Ann was struck by a bullet and killed. Despite the battle raging around them, several soldiers laid down arms in order to bury her on the spot. 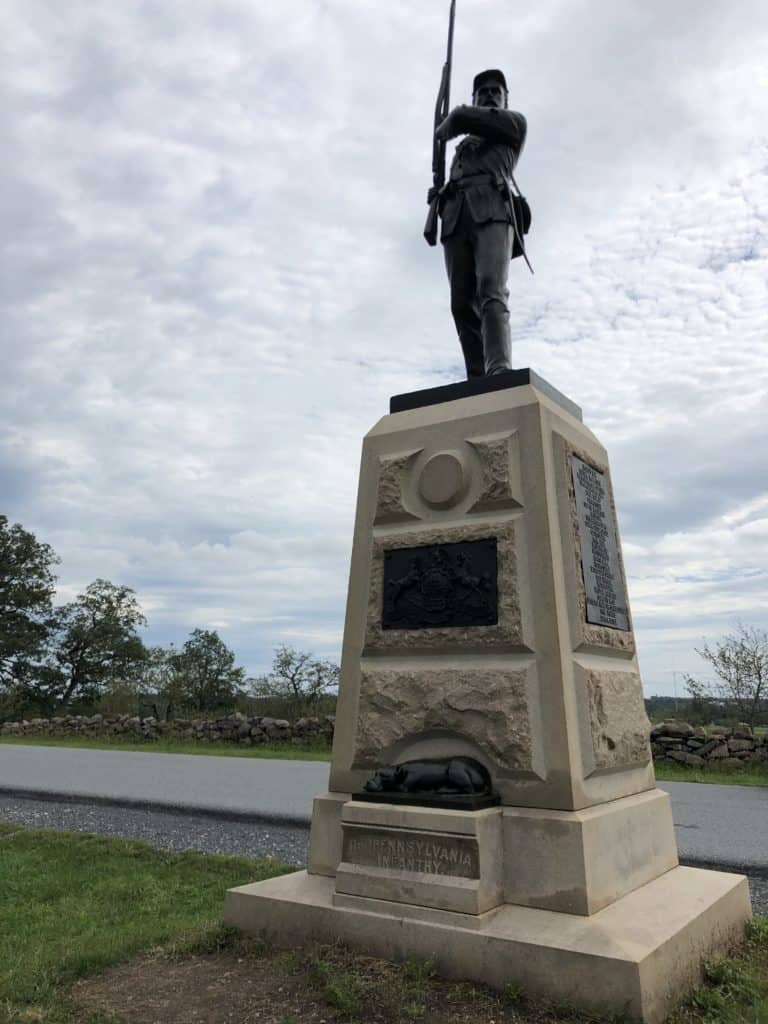 In 1890, when veterans of the 11th Pennsylvania erected their monument at Gettysburg, it included a life-size bronze statue of Sallie Ann on the granite base. Her state lies below a bronze figure of a skirmisher and serves as a lasting reminder of a dog who protected her troops to the end — as well as Westmoreland County’s role in the Battle of Gettysburg and beyond.

It's always wonderful to see loyal Sallie remembered! Visitors to Gettysburg often leave "gifts" of flowers, biscuits, and flags at Sallie's statue as tributes to her loyalty. We think her soldiers would be pleased if they could know how well-loved their dog is 150+ years after the war. Thanks for sharing her story!