With Pittsburgh’s colorful history spanning more than 250 years it is no wonder its buildings have quite a few stories to tell. Honestly though, when I think of Pittsburgh buildings and curiosities, one in particular absolutely rises above the rest — the Allegheny County Morgue.

This is definitely a case where the truth is stranger than fiction. Honestly, I can’t make this stuff up.

The Beginnings of the Allegheny County Morgue

The year was 1887 and Herber McDowell was the coroner and medical examiner of Allegheny County. The only problem was, the city didn’t have a morgue, instead local undertakers would race each other to recover the city’s dead bodies in order to collect the $12 fee (about $300 now) from the county. In fact, the state’s only morgue was in Philadelphia. This posed a problem for a growing city such as Pittsburgh.

After McDowell took his post, he began working with lawmakers to draft legislation to help counties statewide to fund and standardize their morgues. When the legislation was passed in 1893, Allegheny County set up a makeshift facility on Eighth Street. 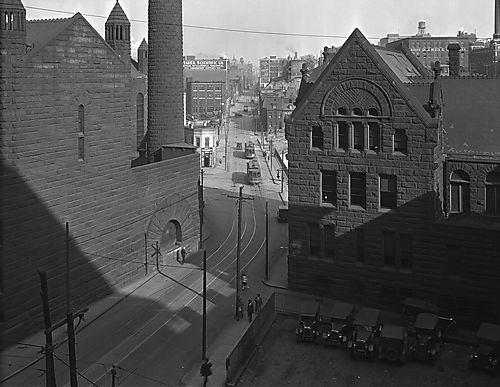 A view of the Allegheny County Morgue taken in 1927 in its original location. (Photo courtesy of the University of Pittsburgh)

Well, this makeshift setup wasn’t really working, particularly with deaths being so high due to accidents in the steel mills, manufacturing, and in construction. The city needed a more modern place to work. Therefore, in 1901 construction of a new city morgue began. The new facility was completed on April Fool’s Day in 1903.

Morgue on the Move

Now, I’m not sure if the April Fool’s Day opening was a sort of foreshadowing, but things went well for 25 years. The new morgue, which was designed in the same sort of architecture as the adjacent courthouse and jail, was a perfect location in 1903 but by 1929 it wasn’t so much so. The county was expanding and was developing plans for a new County Office Building — the only problem was, it was in the same location as where the morgue was currently sitting.

Debate ensued about what to do with the morgue. It was only 25 years old, after all, and the county had a lot of money wrapped up in it. Eventually, it was decided that instead of tearing down the morgue it would save money to just move the three-story marble and stone building. Did I also mention they had to squeeze it in-between two existing buildings? 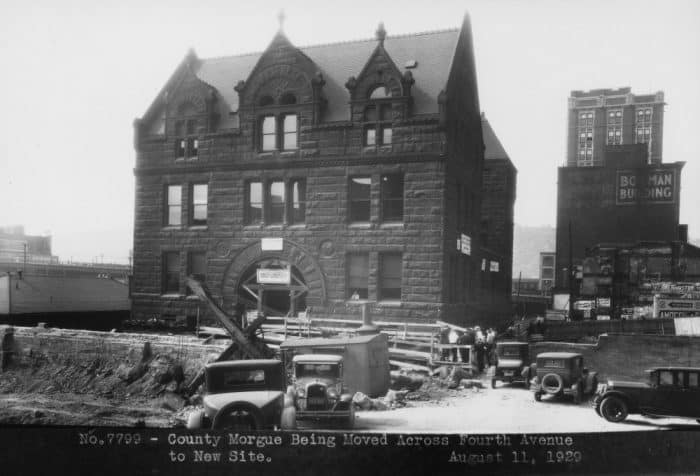 Allegheny County Morgue as it was in process of being moved. Note the support in the arched doorway.

Now, I don’t care who you are, but moving a 6,000 ton building 32 feet to one side and back 267 feet is no easy task. Somehow, the city found the Dress-Oravetz House Moving Company which hailed from the Baltic region and apparently had generations of experience in moving houses. (Who knew?)

The first step was to create a new foundation on the site where the morgue was to be moved to. Then all of the building’s walls, both inside and outside, had to be supported since the morgue was a wall-bearing building. 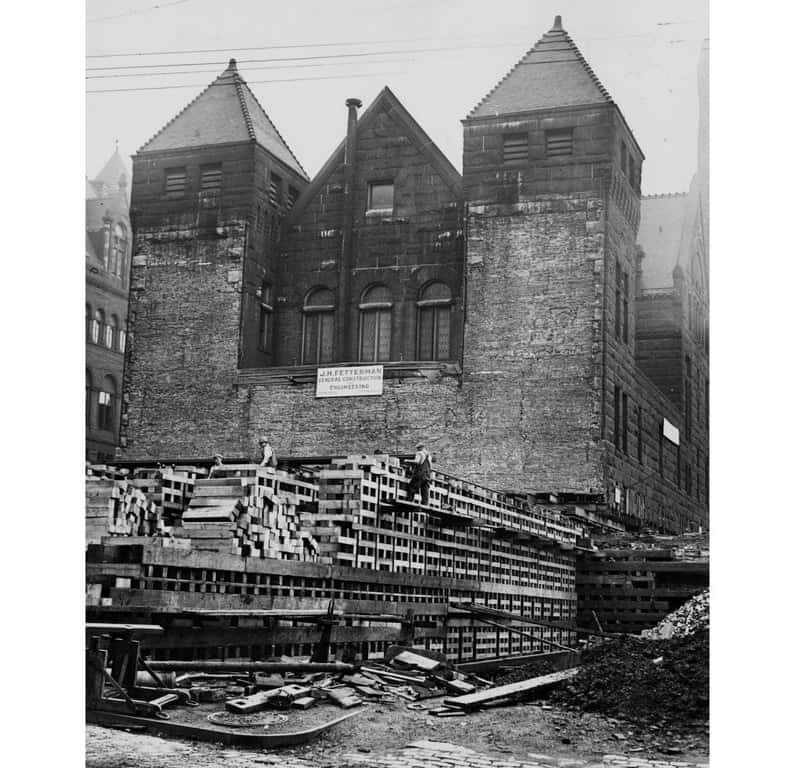 The morgue was raised a total of 27 feet in the air in order to get it higher than the foundation in order to be moved.

Now comes the part that I marvel at. Two wooden causeways, similar to those used in shipbuilding, were constructed. Steel rails were placed on the causeways and metal wheels connected to beams supported the bottom of the building used by the rails.

Workers installed cribbing underneath the bottom of the morgue via the basement then used hundreds of jacks to lift the morgue from its foundation. It was an exercise in precision as one wrong move could cause the whole thing to come crashing down. 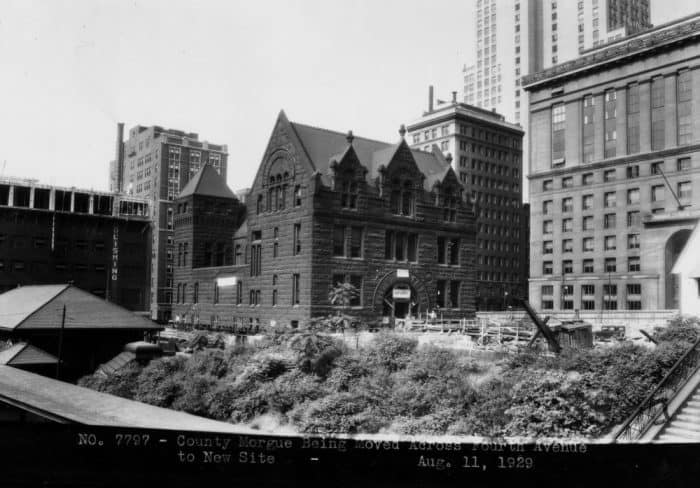 If you look closely you can see that the morgue is off of its foundation. This appears to be as it is being placed on the new foundation.

After getting the building off the old foundation, it was lowered onto the causeway where a team of workhorses slowly turned a winch, inching the building along the rails until it finally reached its new home.

All in all, the move took about three months. So what was the coroner and his staff supposed to do in the meantime? After all, people were still dying in the City of Pittsburgh. Why, his solution was to keep working in the building as it moved, of course!

Yes, you did indeed read that correctly.

The coroner and his staff continued to work in the building throughout the move, conducting routine paperwork, autopsies, and inquests, all while enduring the occasional jolting and jarring of the building as it moved. It just required the building and rebuilding of ramps in order to get to the entrance. Just be sure to watch your step.

The employees continuing to work in the building posed another interesting challenge as special connections had to be made for the plumbing, sewer, water, and telephone lines. As the building moved, so did the connections. 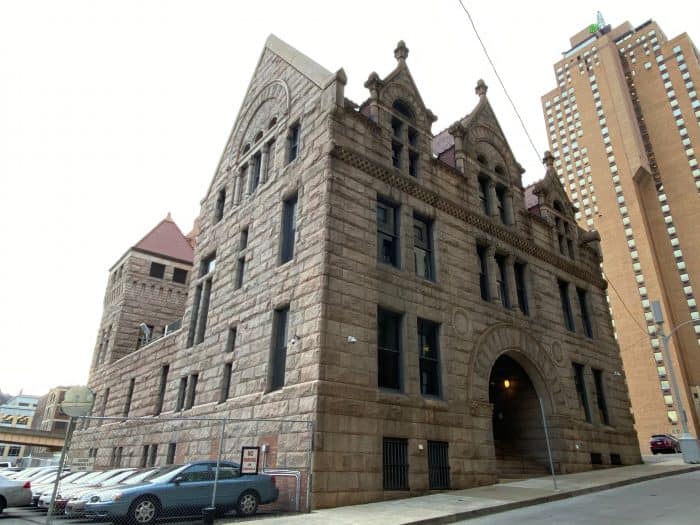 When the Allegheny County Morgue was finally lowered onto its new foundation I’m sure everyone breathed a sign of relief. Overall, there wasn’t much damage done to the building other than a few hairline cracks in the plaster. 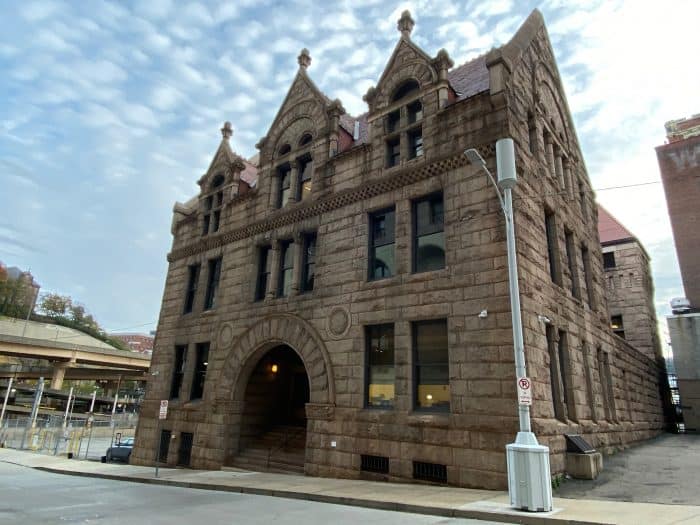 The Allegheny County Morgue served the county in its new location for the next 90 years. In that time period it became somewhat infamous as teenagers would make it a rite of passage to sneak by the guards to take a look at the unclaimed bodies. Some teenagers even recall taking their prom dates to the morgue. To give the experience even more of an eerie feel, supposedly the unclaimed bodies used to be laid out in the morgue’s chapel. 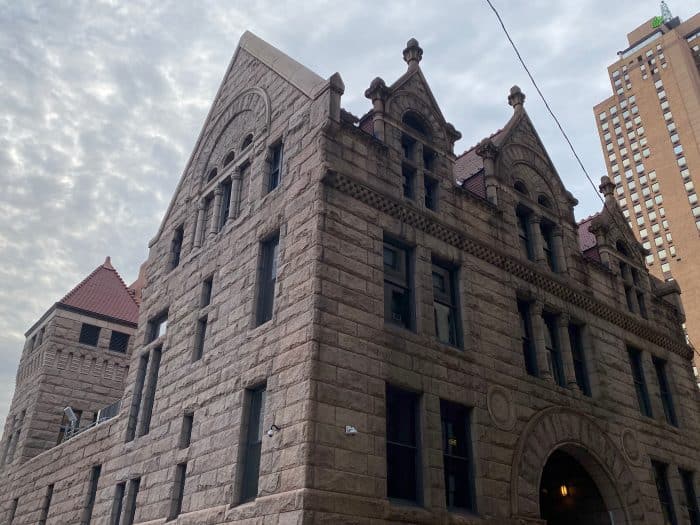 The morgue moved locations again in 2009, this time using moving boxes instead of jacks and rails. The coroner’s office had built a newer, more modern facility in the Strip District. 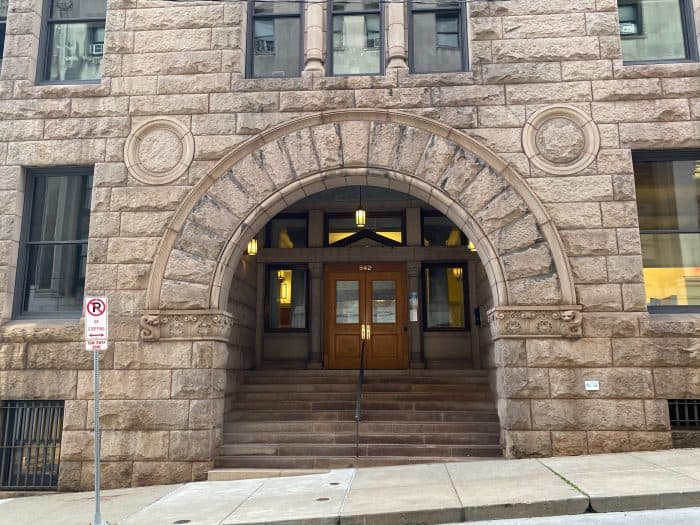 Note the same arched doorway as the vintage photograph with the doorway supported. 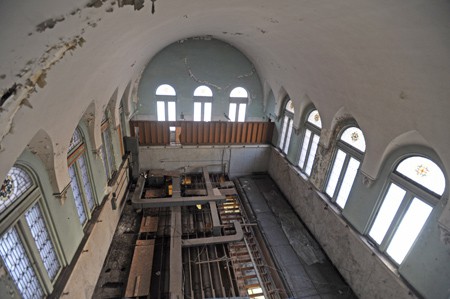 A view of what the Allegheny County Morgue chapel looked like before the renovation. The space now holds cubicles. (Photo courtesy of the Pittsburgh History & Landmarks Foundation) 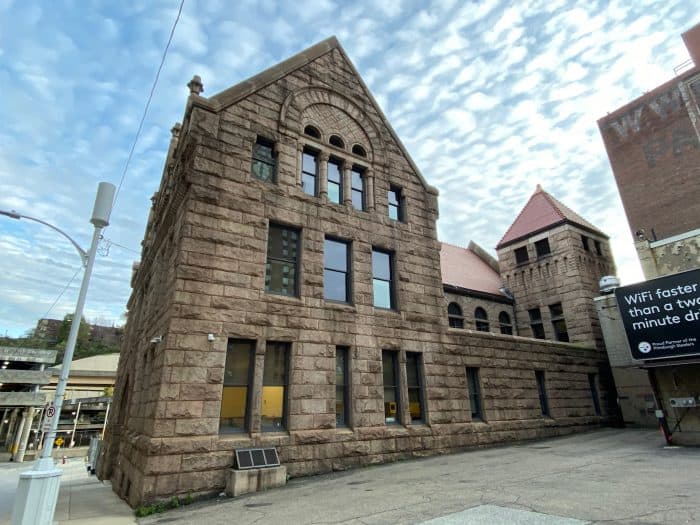 A side view of the former Allegheny County Morgue. Note the windows with the domes on top in the shorter, center section. This is where the chapel was located. 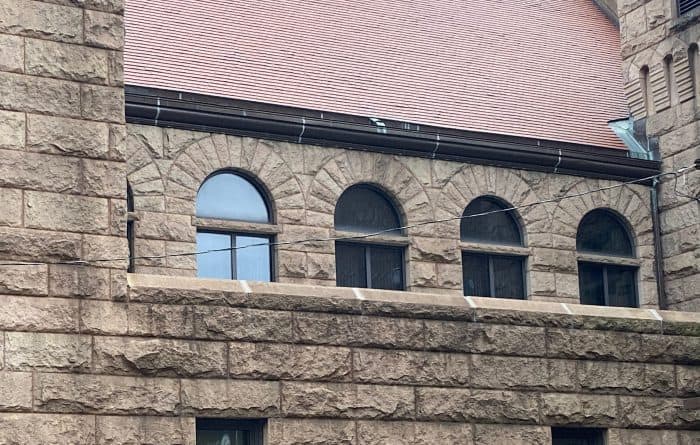 If you zoom in and look very closely, you can see the stained glass windows that match the windows in the top picture.

After a $8.7 million renovation many of the building’s original touches remain, including marble flooring, woodwork, copper balustrades, and 12 of the 13 original stained glass windows in the chapel.

Oh, by the way, if you are visiting the Miniature Railroad at the Carnegie Science Center, look for the Allegheny County Morgue Model on their layout!

There were no guards to slip by. at least in the late 50s and in early 60s. It was a creepy but popular place. Every body was on a gurney with the body, except for the head covered,