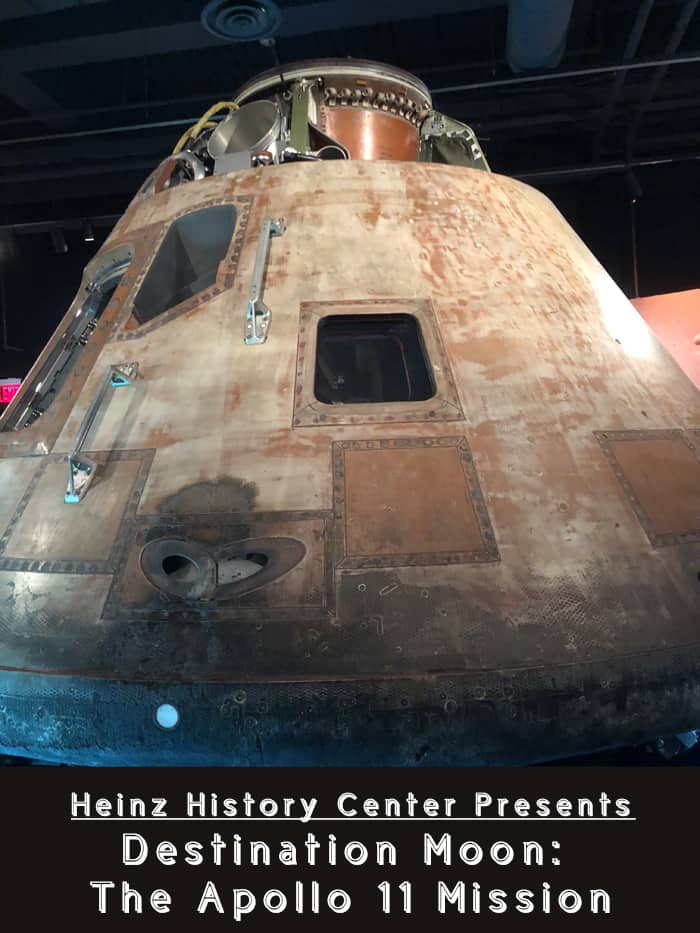 Destination Moon: The Apollo 11 Mission at the Heinz History Center

This post is brought to you by the Senator John Heinz History Center and The Motherhood. All opinions are my own.

At the beginning of October, the Heinz History Center unveiled the exhibit, Destination Moon: The Apollo 11 Mission. This exhibit was developed by the National Air and Space Museum and the Smithsonian Institution Traveling Exhibition Service. Pittsburgh is only four museums to host the exhibit and the only one east of the Mississippi.

Destination Moon explores NASA’s historic Apollo 11 space mission — the first mission to land on the Moon. Featuring over 100 artifacts, including Buzz Aldrin’s helmet and gloves, this museum takes you through the entire mission from inception to the actual mission itself.

The absolute start of the show, however, is the Command Module Columbia, which landed on the Moon and served as the living quarters for Michael Collins, Neil Armstrong, and Buzz Aldrin. It then returned them safely back to Earth.

The tour of the Destination Moon exhibit is meant to coincide with the 50th anniversary of the mission which will be on July 20, 2019. This also marks the first time in nearly 50 years the the Columbia has left the Smithsonian.

We were treated to a tour by two of the Heinz History Center volunteers who walked us through the exhibit. They pointed out many of the connections Pittsburgh had to the mission, from the making of the materials to the prototype Westinghouse camera that sent the iconic footage back to Earth. My favorite, however, was the American flag pole prototype developed by Pittsburgh Jack Kinsler.

I was concerned that the exhibit would be boring for the boys, but it also featured child-friendly aspects such as in immersive launchpad entrance, a life-size replica of the command module that kids can climb in, a lunar landing video game, and a Mission Control module.

Even though the Heinz History Center is focused on history (obviously!) there are so many things that can also engage young children such as my boys. In fact, we spent nearly the entire day, from open to close, at the museum checking out the exhibits.

Being from Latrobe, I’m a huge Mister Rogers Neighborhood fan so I was really excited to see the Mister Rogers Neighborhood exhibit. This exhibit featured actual set pieces from the show including the tree X the Owl and Henrietta Pussycat lived in as well as King Friday’s castle. There was also an interior set from Mister Rogers’ living room on the show. Also on display were several of the original puppets (you can actually find additional puppets at Pittsburgh’s Children’s Museum).

The boys really enjoyed the Discovery Place which allowed them hands-on exploration using puzzles, blocks, and other building elements. It allowed them to experience the history center on a whole different level.

There were so many different artifacts and exhibits in the history center that it literally took all day to take everything in. In fact, you could probably spend two days just trying to thoroughly see everything.

While the Heinz History Center is open all year long, the Destination Moon exhibit is only at the history center through February 18, 2019 so be sure to catch it before it’s history! (See what I did there?)