The 1930s were the heyday for roads such as Route 66 and the Lincoln Highway. The interstates and turnpikes were still things of the future and the journey was often just as exciting as the destination.

To grab the attention of many of these travelers, the roadside attraction was born. These eyeball-grabbers often involved weird attractions, hidden sights, and larger-than-life statues and buildings.

One of my all-time favorite roadside attractions was located along the Lincoln Highway right outside of Bedford. I remember seeing this attraction from the time I was young. The S.S. Grand View Ship Hotel. We would be traveling along Route 30 to Breezewood to go on vacation. I would stay awake specifically to see the Ship Hotel and Storyland. 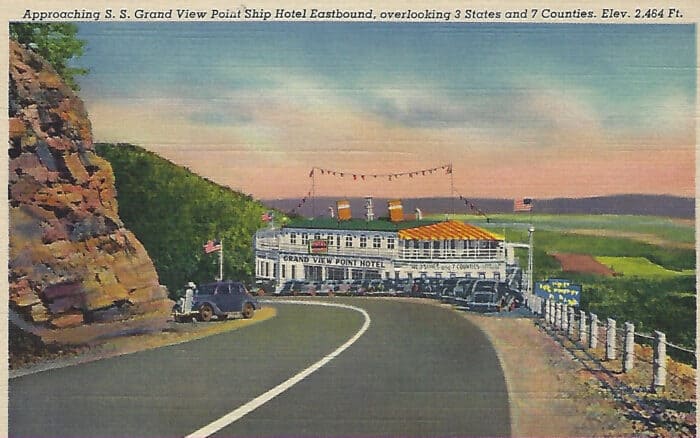 At the time I knew that the ship was an engineering marvel, but it wasn’t until I was older that I really realized how special it was. 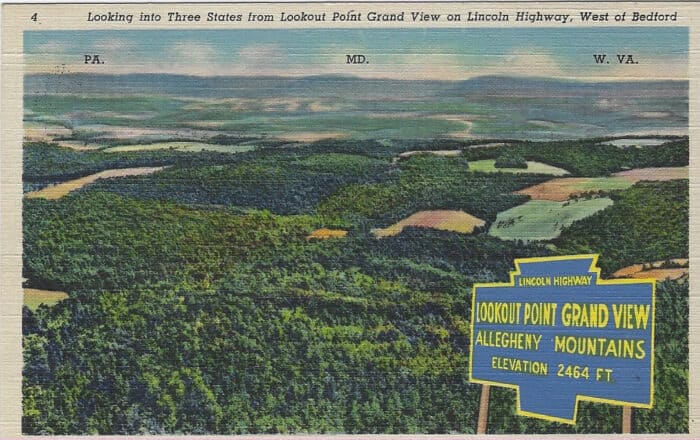 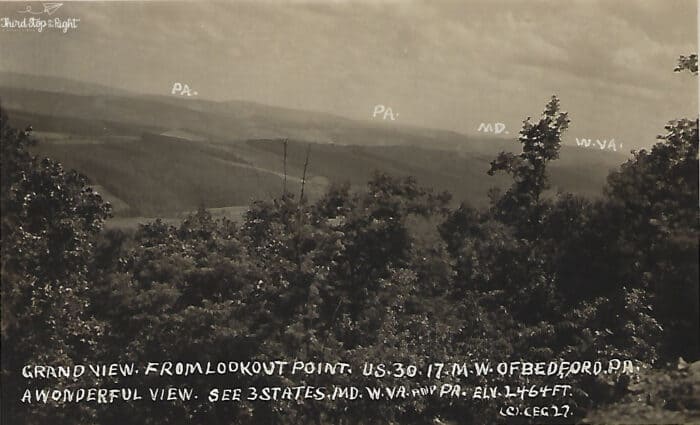 Rising 2464 feet above sea level, you can see not only Pennsylvania but also the mountains of Maryland and West Virginia from the lookout point. 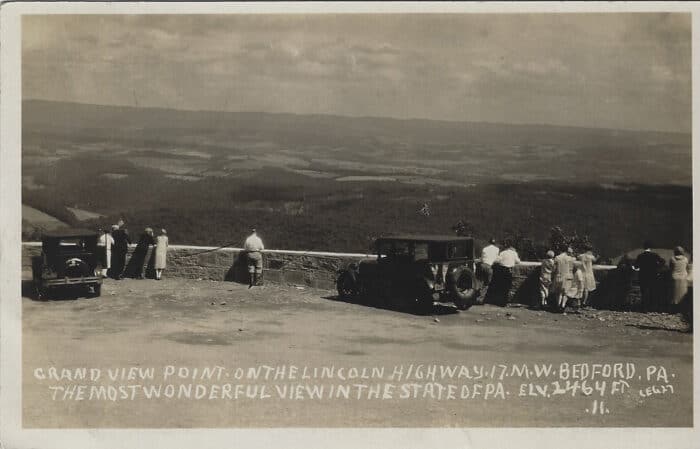 Travelers would pull over on their way up the mountain to take a look at the view.

By the early 1920s this lookout point was already a spot for travelers to pull off and enjoy the view. It wasn’t long after that Herbert Paulson, a Dutch immigrant, got the inspiration to build the first permanent structure at Grand View — calling it Grand View Park. 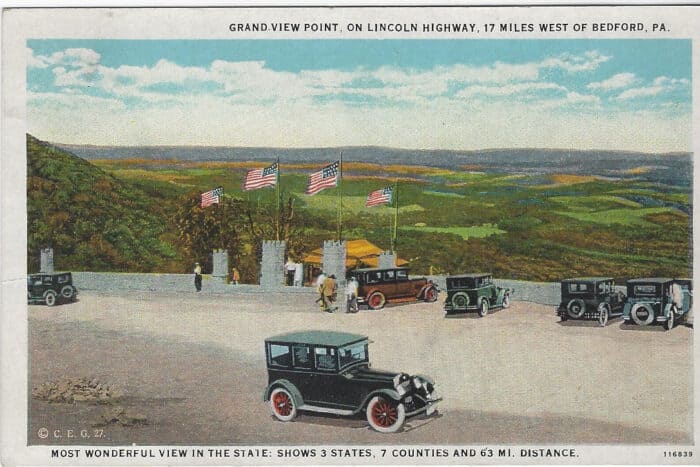 The first structure at Grand View Point wasn’t much more than a snack stand.

While the first structure was pretty much just a snack stand, Paulson wasn’t done. 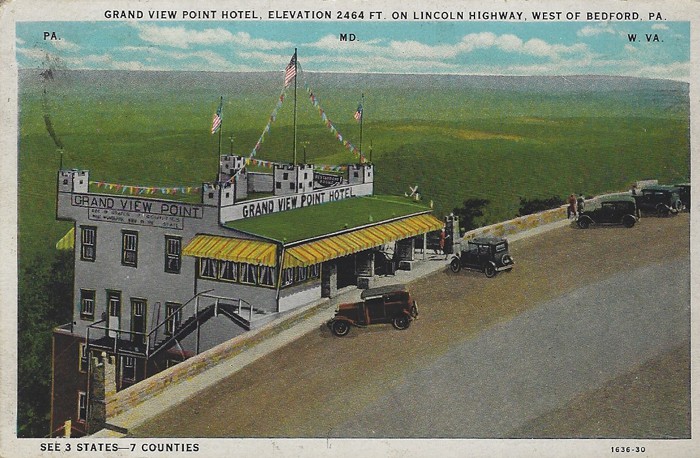 This was the second structure that Herbert Paulson built on the Grand View Point site.

He enlarged the stand, calling it Grand View Point Hotel and building it in a castle theme. Across the street, tucked against the hillside, he built a gas station as well. It was the perfect place for travelers to fill up their cars, enjoy the view, and rest for the night. 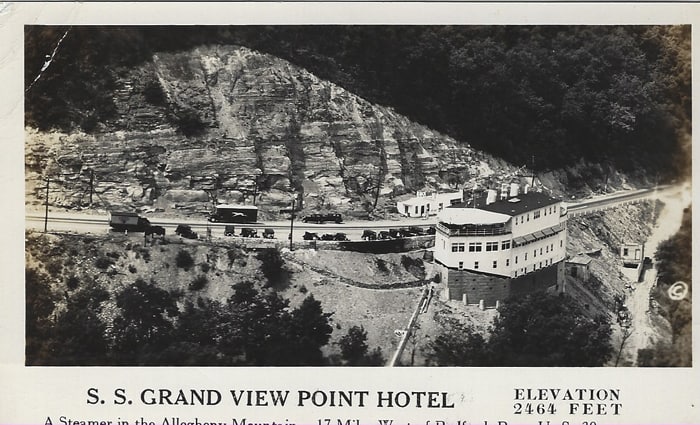 An aerial view of the Ship hotel shows where the hotel was located with the gas station across the street.

This is an aerial view of the later version of the ship where you can see how the ship and the gas station was situated.

Building the Hotel was no easy task as three steel I-beams were put under the road and anchored to the mountain. In addition, 18 pilings helped to support the building, making it look as if it was hanging off of the hillside. 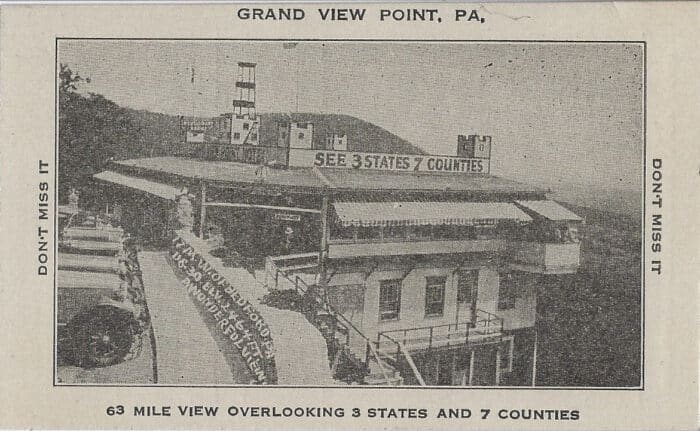 The original building had 4 floors with three of them below the level of the road. The first floor featured a dining room, gift shop, and a lookout deck; the second and third were overnight accommodations; and the fourth was vehicle storage.

Although this version of the hotel was impressive, the best was still yet to come. 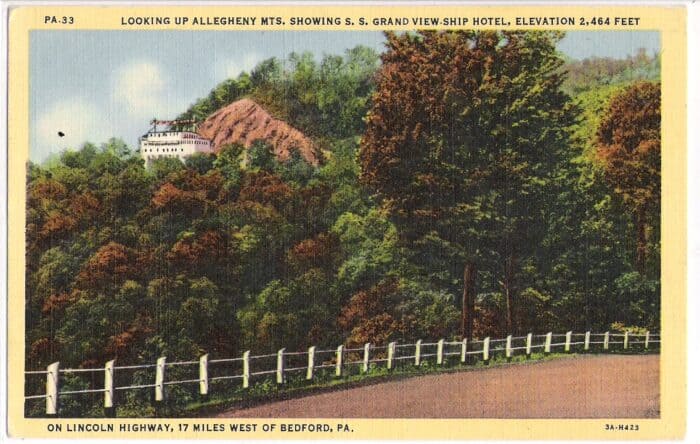 As you travel up the Lincoln Highway you may have spotted something in the distance that resembled a ship floating on the morning fog.

In the early 1930s, Paulson had dreams of expanding his hotel again. He had considered the castle theme but decided against it because it would block the view. He also considered making the hotel in the shape of a fish but didn’t have the funds to make a tail on it. Keeping with his love of things nautical, Paulson decided to construct a ship. The Ship of the Alleghenies. 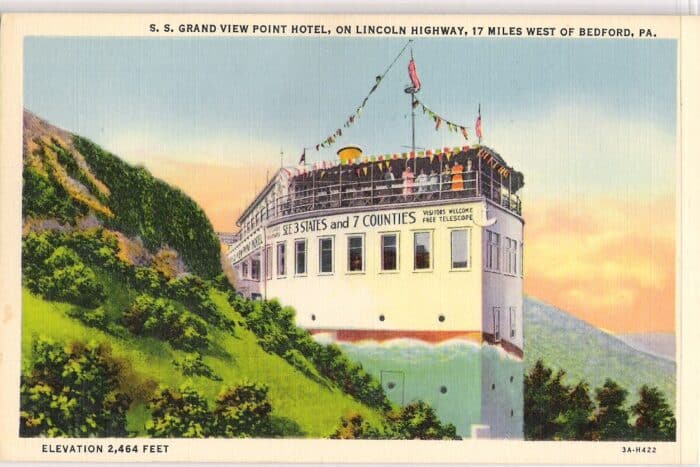 The new Ship Hotel was an engineering marvel.

In October of 1931, Paulson began building his new hotel on the pilings of the earlier building. The new “Ship Hotel” cost $125,000 (borrowed at a whopping 16 percent interest) and used 63.5 tons of steel to build. On May 29, 1932 the S.S. Grand View Ship Hotel opened with fanfare such as concerts, tours, and other events.

The slogan painted on the side of the ship claimed “See 3 States and 10 Counties” and visitors flocked to see for themselves. 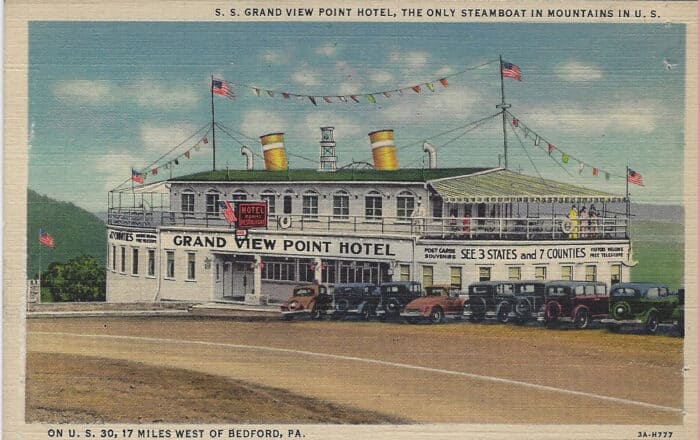 In keeping with the theme of a ship, the S.S. Grand View tried to be as authentic as possible. The ship featured observation decks, a captain’s wheel, a telescope, and the ship was ringed with life preservers. The upstairs accommodations were called “First Class” while the lower-priced, lower-floor rooms were called “Second Class” and “Third Class.” 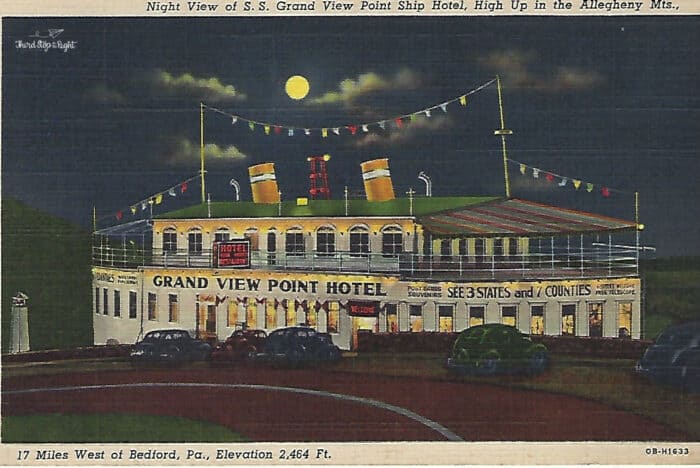 While in its heyday the ship’s log book boasted high-name visitors such as Greta Garbo, George Burns, Henry Ford, and J.P. Morgan; it also had more than 102,000 other names from every state and even 72 foreign countries.

Here’s a look inside the ship: 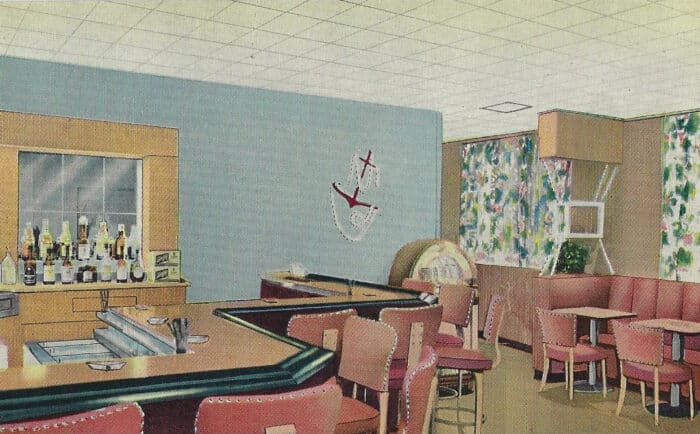 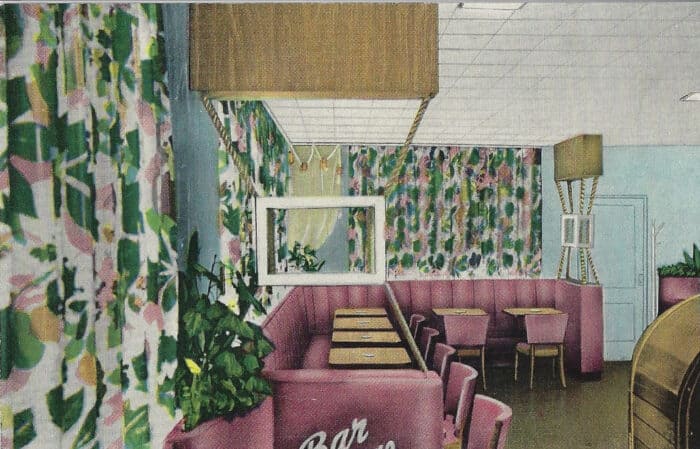 The Coral Room had a nautical theme and a bar. 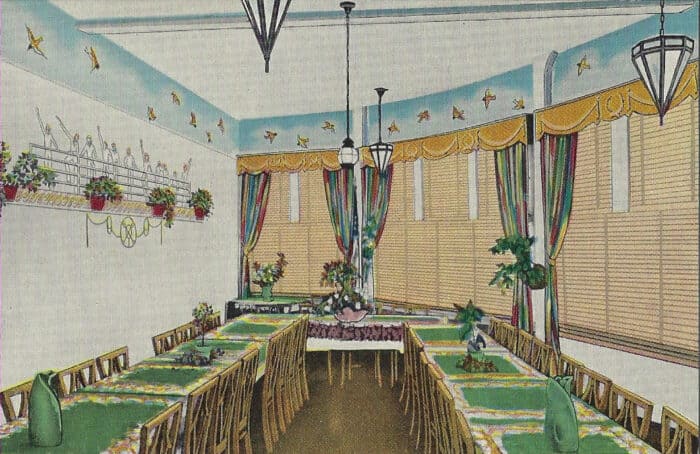 This was the main banquet room. It appears it was set up for a banquet when this was taken. 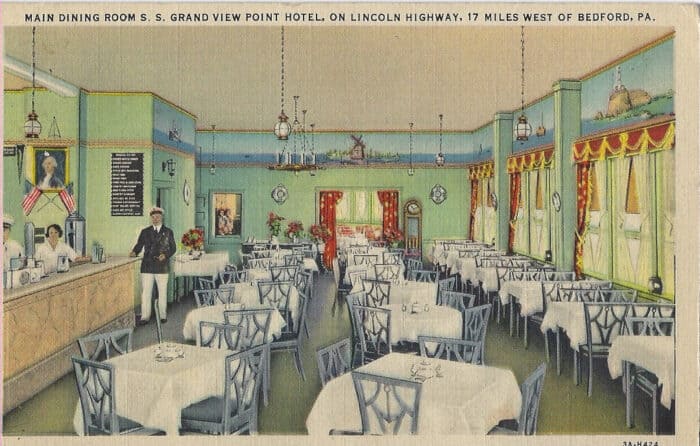 This was the main dining room, complete with a bar. 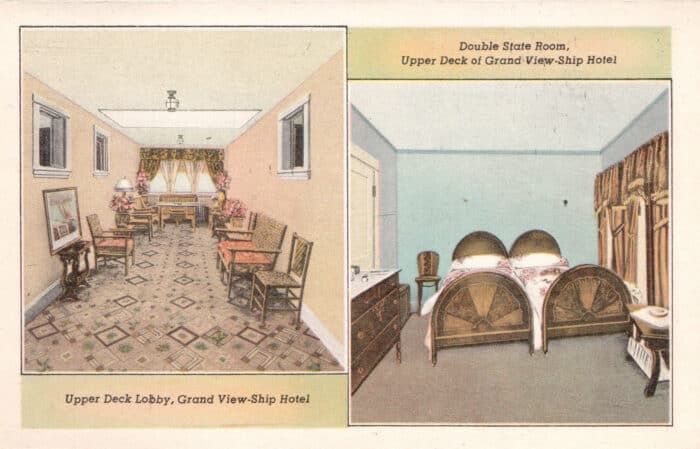 This view shows the upper deck lobby as well as a glimpse inside one of the double estate rooms.

While the 1930s were the Golden Years for the Ship Hotel, Paulson may not have been ready for what was in store.

The Ship Hotel: The Later Years

While the 1930s were wildly successful for the S.S. Grand View Ship Hotel, in 1940 the Pennsylvania Turnpike was constructed allowing travelers to bypass the winding, scenic Lincoln Highway route. In fact, the original 160-mile Turnpike let motorists shave three full hours off the drive from Carlisle to Irwin. Over time, the amount of travelers willing to take this extra time began to dwindle. 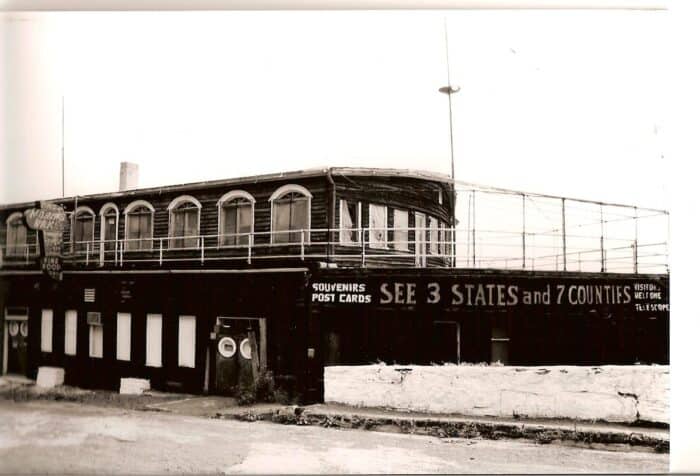 The S.S. Grand View Ship Hotel was later renamed to be Noah’s Ark.

In 1973 Herbert Paulson died and the Ship Hotel was sold to Jack and Mary Loya who tried to revitalize the ship, renaming it “Noah’s Ark” and covering the white aluminum with wooden planking. A petting zoo was added by the old gas station, but ultimately in 1987 the endeavor failed and the ship closed to the public for good.

Soon the structure began to deteriorate. 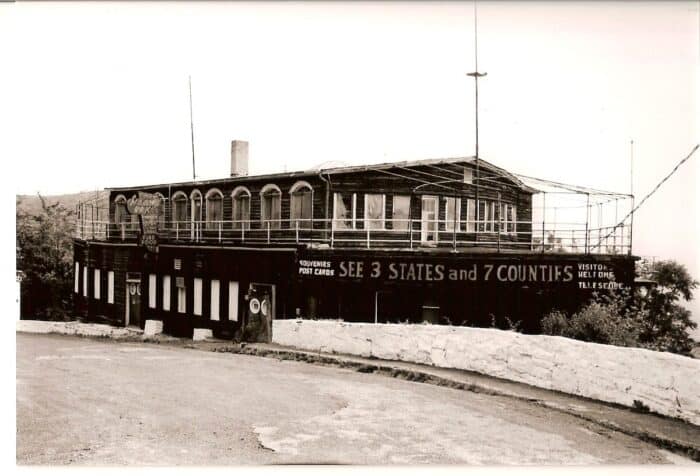 An offer was made by the Lincoln Highway Heritage Corridor to purchase the ship for $40,000 but the owners demanded $900,000 and the offer was rejected. An impasse ensued and the ship continued to deteriorate with the help of the occasional squatter and trespassers. To deter any unwanted visitors, the owners began leaving a light and television on. Whether that played a part in the ship’s eventual demise, we’ll never know.

At 2:30 a.m. on October 26, 2001, a fire broke out on the ship. By the time first responders got there, it was too late as the whole ship was engulfed in flames. In fact, the fire burned so hot and so completely some witnesses said that it looked like daylight was breaking on the mountain.

The Legacy of the S.S. Grand View Hotel

Even though the ship has been gone for over 15 years, it’s legacy still lives on. Every time I go past the site on my travels I make it a point to stop and admire the view. I am usually not alone either. I hear parents and grandparents telling children about the ship that used to look as if it was sailing across the mountains. I have shown my boys pictures and described what was once there. 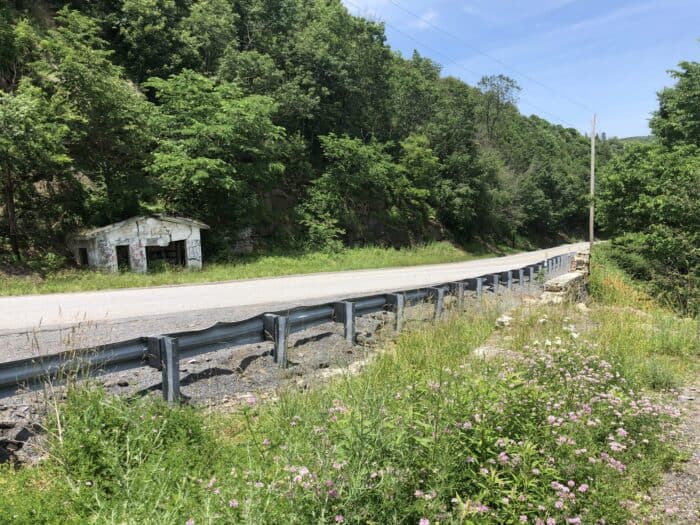 The site of where the Ship Hotel once sat along with the abandoned gas station. 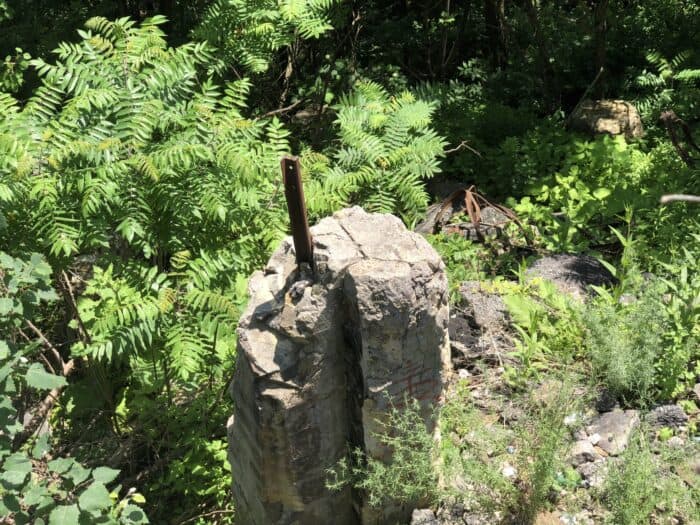 Pilings and twisted metal are now all that remain from the former Ship Hotel. 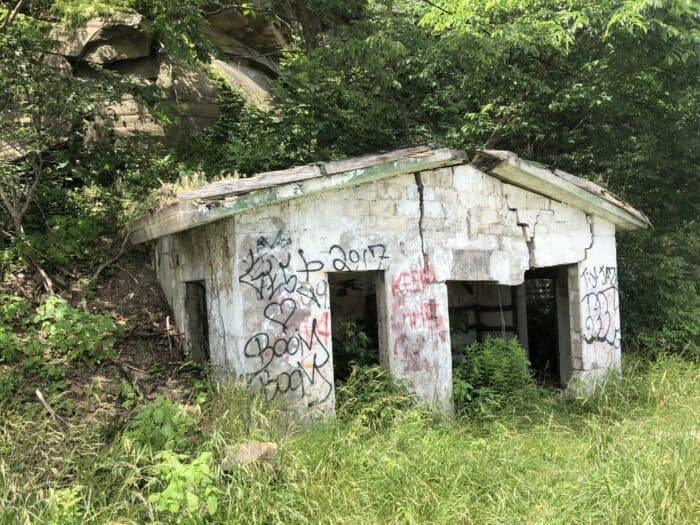 The small, white, crumbling building is all that remains of the original Ship Hotel and is what was once the gas station.

Unfortunately, nothing remains of the ship today but a wall, some concrete, and scattered pieces of metal that haven’t yet been taken for scrap. However, to the observant eye, you will see a small white structure across the road from the site of the ship. In fact, this is the gas station that Paulson originally built with the snack stand (the very first structure at Grand View). Although it is not in good shape, the gas station managed to outlive the mighty S.S. Grand View Ship Hotel.

Hopefully, someday someone will put something to memorialize the ship at the site before it is forgotten to time.

At least the Grand View remains.

Squatters were the ones that Started the first fire that gutted the ship. The final fire was set by a volunteer fireman who also burned down other locations on route 30 including the Swiss chalet.

My family and I, who lived in Harrisburg, went tent camping every year at Shawnee State Park when I was a kid in the '50s and early '60s. Some of my most cherished memories are of those trips, which always included a much looked forward to visit at the Shop Hotel. The drive there was scary for me, as I was afraid of heights, and I would keep my eyes tightly shut while my Dad parked facing that huge drop. I well remember the observation deck, the restaurant and the gift shop where I always bought something with my allowance money. It was a different age, not "better" in every way from present day, but quieter and I'm glad to have been a kid then. I wonder if today's kids will remember the huge parks now everywhere with the same fondness... I was a lucky kid to have the Ship Hotel as part of my memories. Enjoyed this article and pics so much - thank you.

Parents would take us for a Sunday ride. Always stopped here for a visit. I took my granddaughter to the site last year and was disappointed as to no one taking care of the site. Couldn't even pull off road safely. If I lived closer I could help fundraiser or something to restore site. Sad to see history disappear.

I grew up in Johnstown after 1945. I remember my parents stopping at the hotel site for the view. Around 1977 I moved to Bedford County and passed the Ship many times traveling between Johnstown and Bedford. During the Loya ownership, they kept a live bear inside a wooden fence on the gas station side of the road. It was a pitiful life for the bear. The hotel fire was a few weeks before I moved to Tennessee, where I live now. Thank you so much for this article. It brings back many memories.

We went to Bedford just about every weekend . Great fishing spots. I loved to stop at the Ship Hotel. That was in the 80’s when it was starting to get rundown.