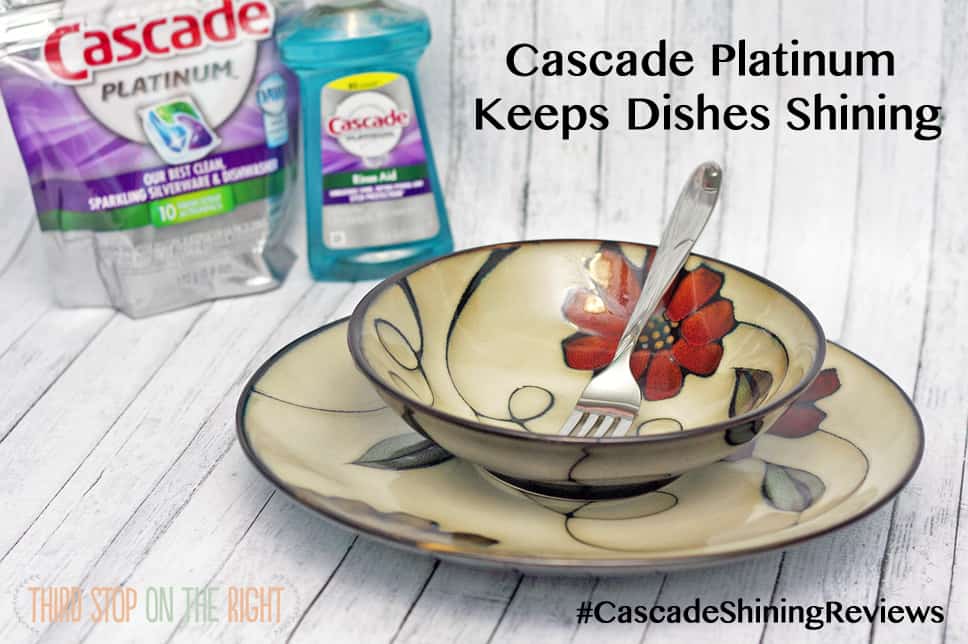 “This review was made possible by Double Duty Divas and Cascade. I was provided the featured product free of charge to facilitate my review, but all opinions are 100% mine.”

This past weekend was not only Labor Day but also my husband’s birthday. We had family and friends over to celebrate. Of course, this involved all sorts of cooking and baking. For me, the worst part of these celebrations is the cleanup.

Once the party is over and all of the guests have gone home, I am left with a pile of dishes in the sink and tons of mess to clean up. The following day I will literally spend a couple of hours washing dishes, loading the dishwasher, picking up toys, and vacuuming the floors. This is all in addition to wrangling two small children.

Over the years I have tried different ways to cut down on the amount of work a party requires. I’ve tried ordering pizza instead of cooking an elaborate meal. I’ve tried using paper plates instead of our regular dishes. I’ve tried having parties outside instead of inside. Then, I found out about Cascade Platinum.

Cascade Platinum allows you to speed up the cleaning process by skipping the prewash. In fact, Cascade Platinum actually works better when food residue is left on the dishes because Cascade has a special enzymes that latch onto food, breaking it down so it can be washed away. If there is no food residue, there’s nothing for the enzymes to attach to! It even works to clean 24-hour stuck on food!

To make the most of your Cascade Platinum, and for optimally clean dishes, check out these five dishwasher commandments which were provided to me by Cascade to share with my party guests:

So, back to my party.

Before the party actually started I made up some brownies and a cake for my husband and our guests. Therefore, I had brownie pans, mixing bowls, mixer accessories, spatulas and more all stacked in my sink. Since I was participating in the #CascadeShiningReviews party it was also a great opportunity to show our guests just how clean Cascade Platinum could get that pile of dishes — even without a prewash!

Although the Cascade Platinum promises immaculately clean dishes and a sparkling dishwasher, I wasn’t sure if our dishwasher would be up to the task. It’s an older model, doesn’t feature any fancy wash cycles, and can often be a little unreliable. I figured we would give it a shot and see how it goes.

I loaded up all of the dishes into the dishwasher and added in one of the packets of Cascade Platinum detergent as well as filling up the reservoir with the Cascade Platinum rinse aid. All I did to the dishes was throw away any large bits of food but didn’t do any soaking or prewashing. None at all.

I want to stop here. Did you know that you don’t have to worry about any of the food that is left on the dishes damaging the pipes or the dishwasher because there is a garbage disposal built in to most dishwashers! It works exactly like the disposal in the sink. Who knew?!?

I (as well as everyone else at the party) was shocked at how clean and sparkling everything was. There were no water spots on anything and all traces of the food was gone. This was seriously as clean as I had seen my dishes in a loooong time! There were no water marks on any of the glasses and the spatulas that had globs of icing on them, the mixing bowls with the remnants of brownie mix stuck to the sides, and even the baking pan with the baked on brownie turned out super clean — not a spot on them!

On another note, I want to mention that when I ran the dishes I threw in one of my younger son’s bottles. Bottle washing is one of my least favorite chores, but recently I have been washing all of the bottles by hand because they just weren’t looking clean if I ran them in the dishwasher. The bottle nipples would be cloudy as well as the insides of the bottles. They just didn’t look clean. The only way to get the milk residue off them seemed to be just using the old fashioned bottle brush. I tossed this bottle in because it was sitting on the counter and I didn’t have time to hand wash it and I didn’t want it to stink.

When I took it out after running the load of dishes I was AMAZED at how clean the bottle nipple was. No cloudiness. No milk residue. It looked like I had just taken it out of a brand new package. Needless to say, I am really excited at the prospect of not having to hand wash all of those bottles anymore in order to get them looking this clean!

I’m so excited because now I won’t have to scrape baked on food off of all the dishes before putting them in the dishwasher. This is a huge time saver for not only when we have parties, but also on a day-to-day basis. Even better is that my 11-year-old stepson now has no excuse for not loading his dishes into the dishwasher!

Try out Cascade Platinum for yourself and use the hashtag #CascadeShiningReviews on Twitter, Facebook, and Instagram to share your experience! In addition, head to the Cascade website to leave a short review of Cascade Platinum including #CascadeShiningReviews. One reviewer will win a Kitchen Aid Dishwasher! We want to see how many others can save tons of time by skipping the prewash! You can also connect with Cascade on Facebook and Twitter for more ways to achieve shining clean dishes!

The giveaway is open to U.S. resides 18 years or older. Prize will include:

My best tip for cleaning the kitchen and cleaning dishes is to clean as I go when I cook. While something is cooking I can use that time to clean something. That makes it much easier when the meal is done.

When cooking a large meal I cleanup as I am cooking so there isn’t a huge mess.

My tip for saving time cleaning up is to clean the kitchen as you cook. That way when dinner is finished all you have to put away is the leftover food, dinner dishes into the dishwasher. Thanks for the opportunity.

I like to clean up as I go so that the mess is “not that big”. Cascade really works in our dishwasher

I tackle the mess right away-I don’t let food dry out on the dishes.

The awesome thing about the Cascade Platinum is that it even works on 24 hour old dried on food! Just put the dish in the dishwasher and Cascade will do the rest! No more scrubbing! Yeah!

I think it works best to clean up as you go so you don’t have a giant mess when you are done cooking.

I try to keep as many of the dishes washed up while I am cooking.

Wash your dishes as you cook

Clean up a little every day so you don’t have to take hours to clean all at one time on the weekend!

I try to clean up as I go or have my son clean up while I keep on cooking!

For the kitchen I always clean as I cook and prepare so their is minimal mess when dinner is finished.

I clean before I go to bed so I can wake up to a clean house.

My best tip is to clean as you cook. I put everything away as soon as I use it

I let the dishes soak while I put the leftovers away.