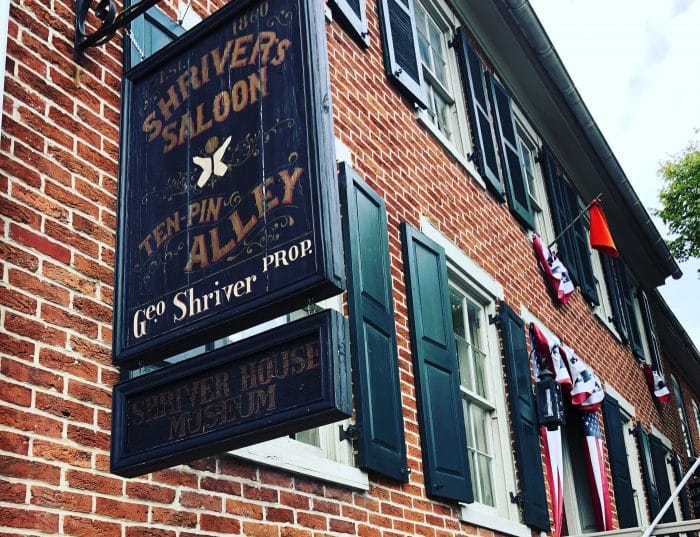 We’ve all read about the horrors of the Civil War but it is often easy to forget the toll these battles took on the local citizens. Once the troops moved on, it didn’t mean that it was over for the townspeople. Instead, the armies left their injured and dead men and horses behind, along with a town in shambles.

This was the case with Gettysburg. Most people don’t realize the civilian toll the battle took on the town. While most tourists head straight head straight for the battlefields, the Shriver House Museum is a historic site that should be on your list. 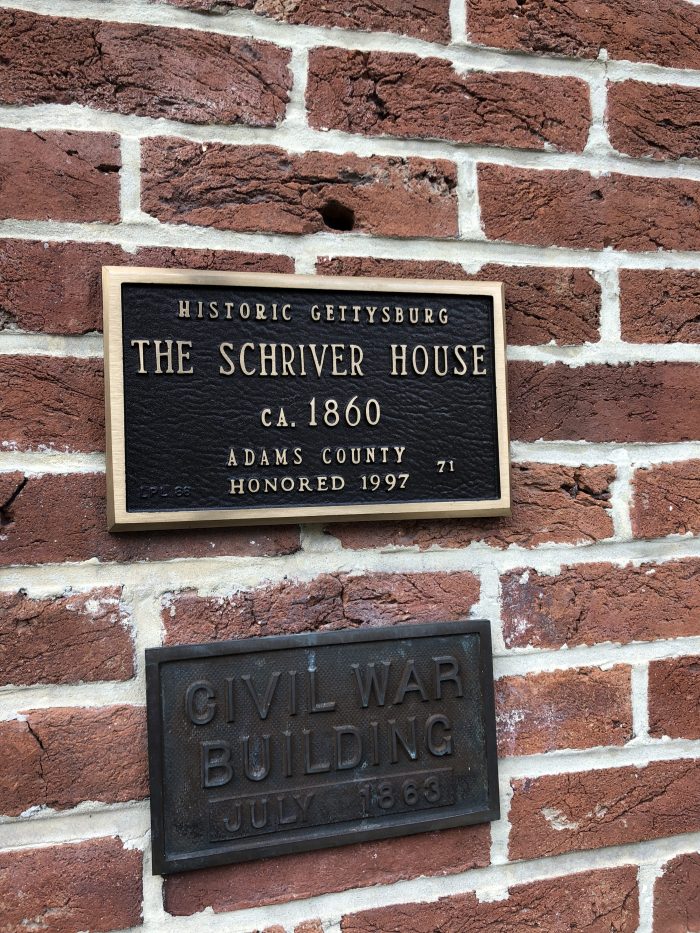 Bullet holes are still visible in the bricks outside of the Shriver House Museum. One of them can be seen right above the historical plaque.

A rather unassuming house, located on Baltimore Street, the Shriver House Museum is dedicated to telling the story of the Gettysburg civilian. This is done through the story of the home’s owners, George and Hettie Shriver and their daughters Sadie and Mollie both before, during, and after the Civil War. 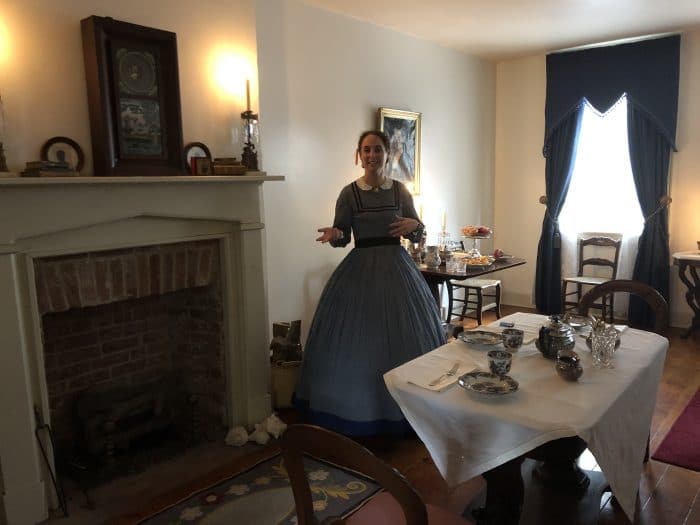 The tour starts in the parlor of the Shriver House. 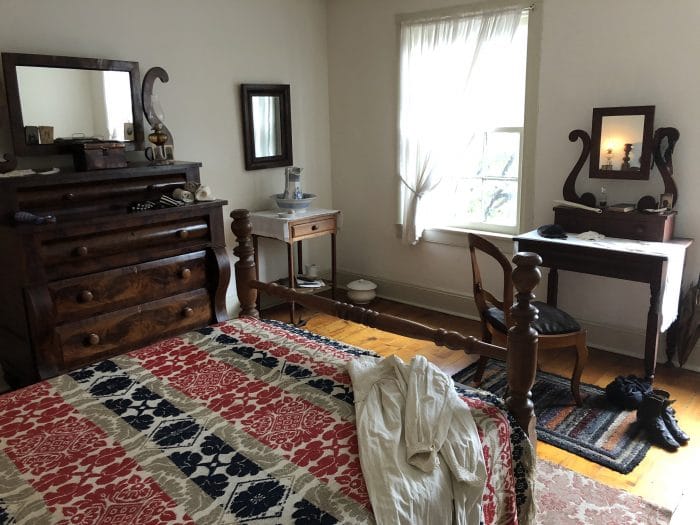 A glimpse at what Hettie and Geroge’s bedroom would have looked like back in 1860. 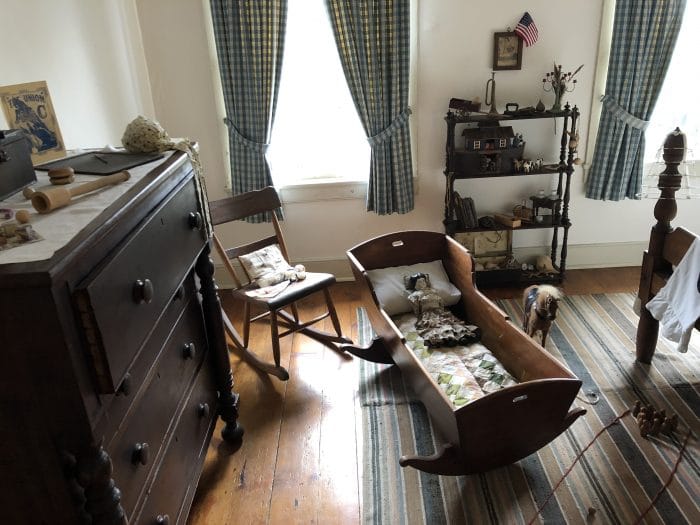 This is what the girl’s room would have looked like in 1860.

The tour starts out showing how the home would have looked in the 1860s, right before the battle of Gettysburg when the Shrivers were a standard family and George was on the cusp of opening a new business — Shriver’s Saloon and 10-pin Alley. 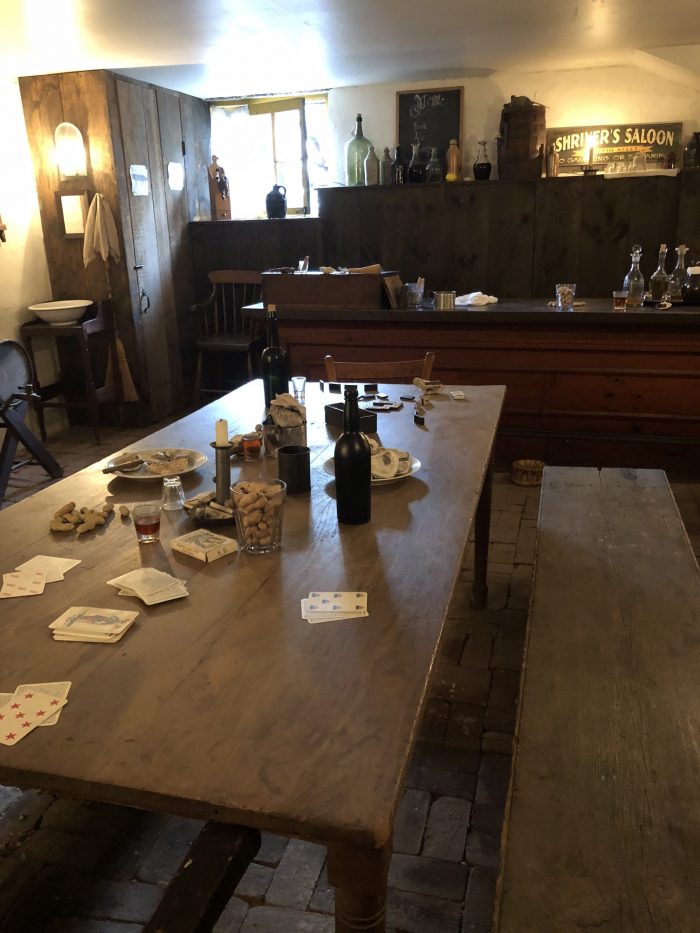 The Shriver Saloon and Ten Pin Alley in the Cellar of the Shriver House.

In the basement of the home, George Shriver was planning on opening a saloon and 10-pin bowling alley. He started building this dream in 1860. The saloon was to be in the cellar of the house while the back yard was large enough to accommodate a building to house the bowling alley. In August 1861 the saloon and bowling alley were ready but war had broken out and George was mustered into military service.

Hettie, Sadie, and Mollie were left alone to weather the remainder of the war along, except for Christmas of 1863 when George was furloughed for four days. 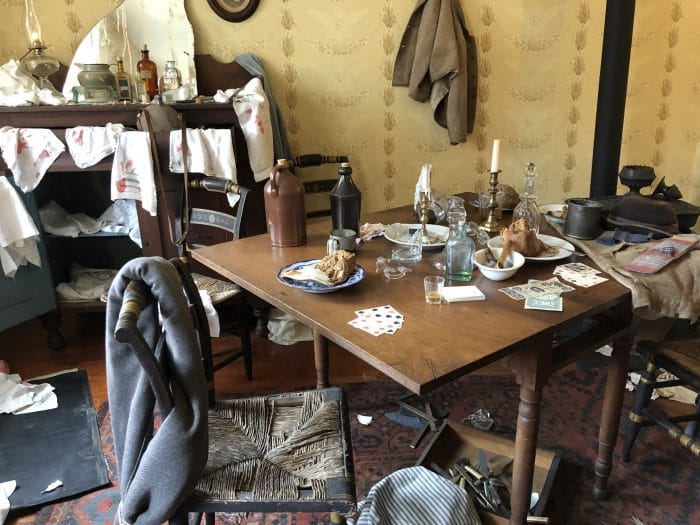 This is what one of the rooms would have looked like after it was ransacked by the Confederates. 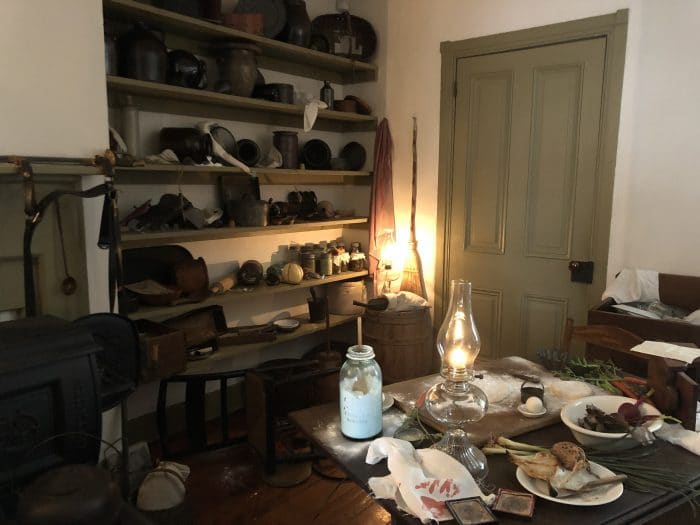 Anything of value was taken from the home as well as any food and supplies. 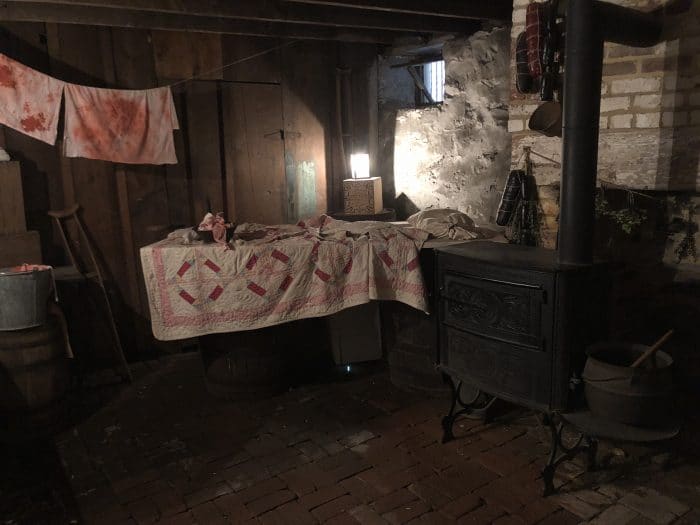 The home was even used as a hospital for wounded soldiers.

The tour then takes a dark turn and reveals what Hettie, Sadie, and Mollie returned to after fleeing the city during the battle. Their home had been ransacked, everything of value taken, and the house used as a hospital for wounded soldiers. The family even found out their attic had been used as a Confederate snipers’ nest. 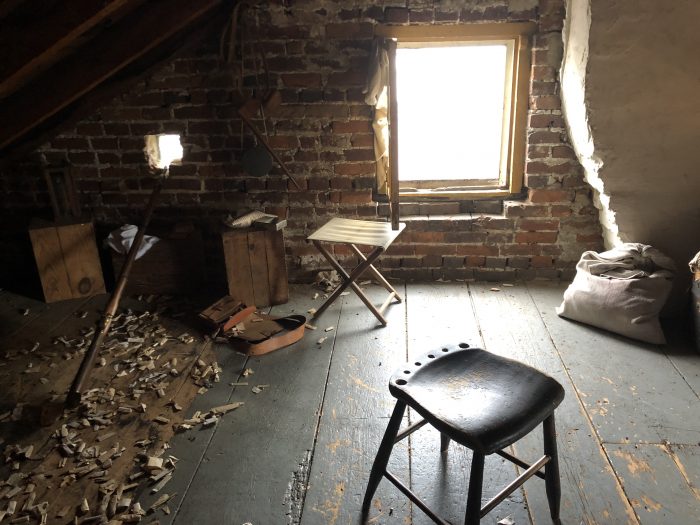 What is interesting about the attic in the Shriver House is although neighbors confirmed it was being used by Confederate snipers and this was evidenced by blood in the attic, there were also reports of two Confederate casualties that took place. Neighbors thought they had seen two bodies being carried out.

In 2003, the attic floor was forensic tested and the results revealed not only blood spatter, but also evidence of the blood being wiped. It also indicated based on the amount of blood that more than two meant were probably shot there. 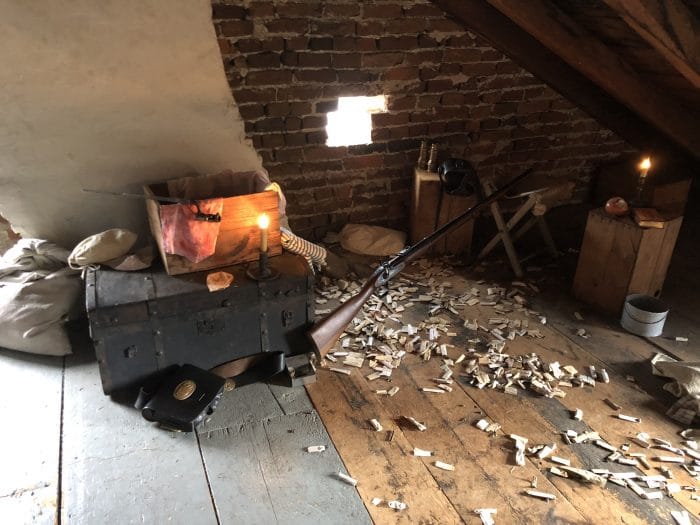 Holes are still visible in the attic of the Shriver House that Confederate snipers used.

On the tour, you can actually go up to the attic and look out the holes the Confederates used to shoot through.

Life After The Battle of Gettysburg

In 1864, George Shriver was one of 12 men captured in a skirmish in Rectortown, Virginia. As a Union prisoner of war, George was sent to Andersonville, Georgia. Sadly, he never made it home to realize his dream of opening the saloon and bowling alley as he died in prison in Georgia. 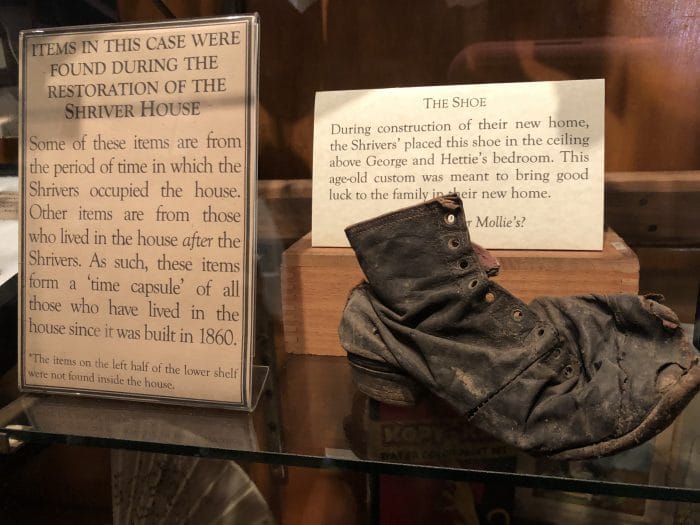 A child’s shoe which was found during the home’s restoration. Was it Sadie or Mollie’s?

From the 1960s until 1996, the Shriver home sat empty when it was meticulously restored. During the restorations, a variety of items were found underneath floorboards, inside walls, and inside fireplace hearths. All of these items worked together to more fully tell the story of not only the Shrivers but of the plight of many of Gettysburg’s civilians.

This museum should absolutely be on your list for your next trip to Gettysburg. To find out more about the Shriver House Museum, visit their website.

While you are visiting Gettysburg be sure to check out these other attractions as well as the 11th Pennsylvania monument with the famous Sallie the War Dog statue.

*This trip was hosted by Destination Gettysburg, however, all thoughts and opinions are my own.*