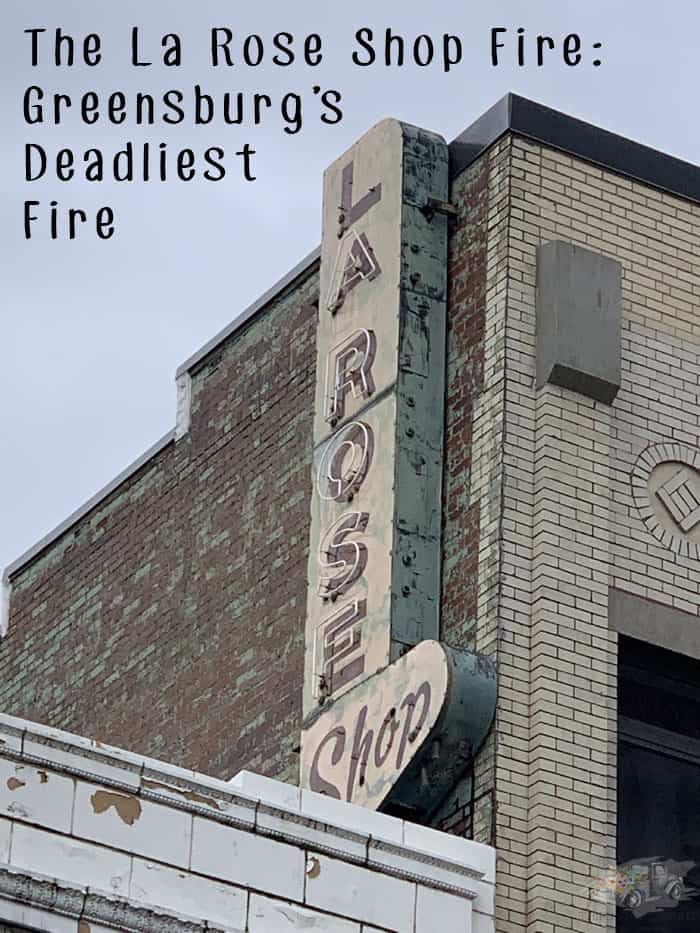 This post contains a graphic image which may be disturbing to children and some people. Please use discretion.

Greensburg has seen its share of deadly fires over the years. In 1972, two men were killed in a fire at the Penn Albert Hotel. Numerous people have lost their lives in house fires. However, nothing stands out as much as the La Rose Shop fire in 1961 where five people lost their lives.

The La Rose Shop was a family-owned women’s clothing store located on South Main Street. The three-story brick building was built in 1913 and in 1915 housed a theater.

After the closing of the theater, the building was remodeled in 1956 to become the La Rose Shop. A fire escape was removed from the rear of the building and partitions were constructed on the second floor to make dressing rooms. The third floor was used for a seamstress shop and also for mannequin storage.

Fire Breaks Out at the La Rose Shop

Shortly after 8 p.m. on October 19, 1961 several customers reported smelling smoke coming from the basement of the store. Employees tried to use two different phones to call in the alarm, but the phone lines were dead. At 8:18 p.m. an alarm was sent from a box on the street.

It wasn’t the fire itself that was the problem, but the smoke. The thick, heavy smoke spread very rapidly, carried by the ventilation system, and filling the building. Within minutes the lights on the first floor went out.

A newspaper clipping from the day after the fire.

Despite the rapid response from Greensburg’s fire department, the building was quickly filling with smoke. At the time of the fire, only one person was on the third floor (she fled to the second floor), 19 people were on the main floor (they escaped), and 10 customers and 11 employees were on the second floor. No one was in the basement.

The store’s owner, Alex Cohen, was one of the individuals trapped on the second floor. Alex and the other employees tried to escape through a rear stairway but smoke forced them back. Five individuals were able to escape through small windows and down fire ladders. Eleven others were rescued when a 24-foot extension ladder was raised to a window.

An Act of Bravery

When those who were trapped in the fire were brought out, many of them were semiconscious and in extreme shock. No one mentioned the owner and his four employees. By the time the 11 were rescued, the owner and employees had been overcome by smoke. It turns out, those five individuals had held back in order to allow the others to escape first. They were found still in a small room on the second floor.

Long-time Greensburg fire chief Eddie Hutchinson has been on thousands of calls over the years, but the La Rose Shop fire is the one that sticks with him the most. Recalling the incident, he said “We took eight out of the front from the second floor. I was at the top of the ladder. The last one out was a lady who was seven months pregnant.”

After the fire, the building was repaired but the La Rose Shop eventually closed in 1977. Afterwards, the building was home to a nonprofit, and also a sandwich shop. The building remained vacant for more than 10 years before it was purchased and converted into loft apartments. The bottom floor was designed to be retail space while the top two floors would be one-bedroom apartments.

For year, the front of the building had been covered by blue glass tiles. During the renovation of the building, the tiles were removed, revealing the original windows from which people were rescued from during the fire.

If you look closely, on the wall between the St. Vincent de Paul and the La Rose building there is still an old neon sign advertising the La Rose Shop. It serves as a silent reminder of the tragedy that occurred there.

I remember this so well as classmate’s mother died in the fire.

Thanks for the details about this past fire. I was only 12 yrs. Old then
& so I didn’t know some of these facts.

My mother, several of my siblings and I were waiting in front of G. C. Murphy’s for the last bus home when we heard the blaring sirens and then saw the smoke and flames across the street. I was terrified and ran around the corner of the building, covering my ears and squeezing my eyes shut in fear. I eventually made my way back to my mom and we gathered in shock until the bus came. I will always remember that frightful night. May those who perished never be forgotten.