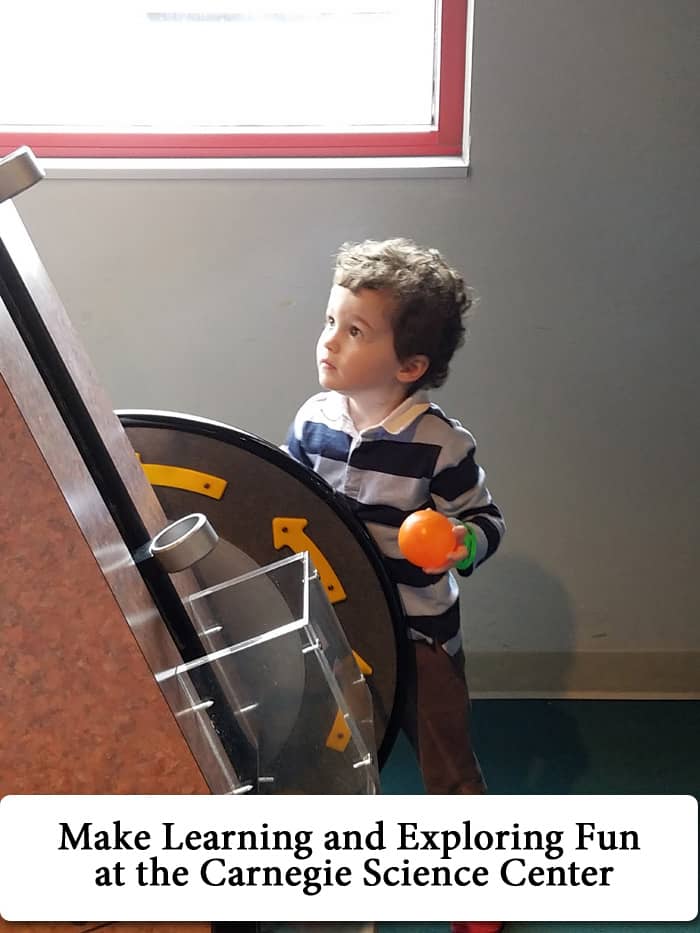 Make Learning and Exploring Fun at the Carnegie Science Center

This past weekend we decided to take the boys to Pittsburgh to visit the Carnegie Science Center. It has been quite a few years since we’ve been down to the Science Center — in fact, I’m pretty sure that the last time we were there N wasn’t too much older than Little E.

If you aren’t familiar with the Carnegie Science Center, it consists of four floors of hands-on activities for kids of all ages as well as a separate building completely dedicated to inspiring learning and curiosity through sports.

As I said, in the Science Center itself there are four floors of activities. The first floor features a water exhibit designed to highlight the importance of our rivers on the ecosystem.

What is particularly interesting about this exhibit is that it demonstrates the effects of evaporation and precipitation. It also allows children to explore how land masses effect the flow of the rivers. In particular, the boys loved learning how the river locks worked!

My favorite part of the second floor is the miniature railroad. I’ve always has an interest in miniatures, but what is particularly great about this railroad is that it also incorporates historic aspects of Western Pennsylvania such as the Ship Hotel, Leap the Dips, Forbes Field, and even the historic Allegheny County Mortuary (shown as it was in the process of being moved in 1929!).

I seriously could have spent hours just walking around the layout and taking in all of the details.

The third floor featured an the Zap! Surgery exhibit. This exhibit shows how different surgeries such as Gamma Knife and Endoscopes are done. This floor was probably a little on the old side for the boys but they did love using the grabbers on the Endoscope exhibit to manipulate the tools.

The boy’s favorite floor, however, was the fourth floor. This was the floor that really let them explore and embrace their creativity. One of the first things they checked out were the earthquake displays. They were fascinated by using different materials and building different types of structures and then seeing how they would hold up in an earthquake. They then got to feel what an actual 7.8 earthquake felt like in the earthquake simulator.

Another highlight of the fourth floor was the ball factory. The boys could put balls up a vacuum chute, over a conveyor belt, or up an incline into a bin. Once the bin filled up all of the balls dumped out and its time to start over!

Additionally, there is another water table on the fourth floor. This one is geared more toward younger children with fountains, waterfalls, and water scoopers. Both boys had a blast seeing different things that they could do with the water.

There are also exhibits for teeth, musical instruments, and even oversized building blocks. Kids can seriously spend hours going from exhibit to exhibit learning and exploring.

Of course, no trip to the science center would be complete without visiting the USS Requin submarine.

Docked outside in the river is a Cold War era submarine. This submarine is like a floating museum. It has been preserved as it was when it was functional and allows visitors to experience life underwater. This is another one of those exhibits where I could have easily spent a large chunk of time just taking everything in.

Even though we spent 5 hours at the Science Center, still didn’t see everything! One of these was the Highmark SportsWorks. Sports Works is a unique sports experience that you can literally make a day of by itself.

We had an amazing time at the Carnegie Science Center. Whether you visit the Science Center, Highmark SportsWorks, or both, spending the day in the city, learning, with the kids was an invaluable experience.

You can find out more about the Carnegie Science Center and Highmark SportsWorks, including pricing, hours, and exhibit information, through the Science Center’s website.

Be sure to check out some of my other posts about activities to do in and around Pittsburgh!