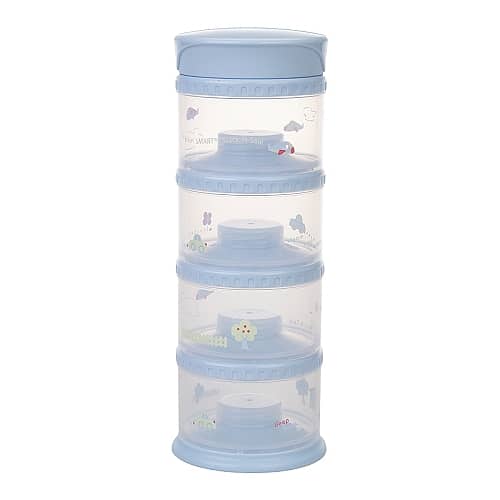 As a mom, I am always on the lookout for products that will make my life just a little bit easier. After E was about two months old I switched from pumped breast milk to formula. The downside to formula is that it can be a little trickier to take with you on trips, especially long trips.

Both Enfamil and Similac both make formula packets that you can keep in the diaper bag, but unfortunately these are rather expensive. I tried different ways to carry formula with me. One of the ways was by putting it in one of those small Rubbermaid containers, but when I tried to get it into the bottle it ended up being a mess!

Then I found this great product by Innobaby. The Packin’ SMART Stack-N-Seal travel series has four tiers that can store, dispense and organize formula, cereal, snacks, water, extra juice, pacifiers and more. What is especially nice is that it can hold either liquid and dry items! It also has a dispensing lid so that you can easily pour the contents into a bottle without creating a huge mess.

Another great product that Innobaby has developed, which is similar to the Packin’ SMART, is the original Packing Smart 5 tier travel system. Like the Stack-N-Seal this is great for taking powdered formula on trips. The compartments are a little smaller but there are more so it would be great for longer trips. This one doesn’t hold liquids, but it is great for carrying snacks. I even would use one of the compartments as a bowl so I could squeeze one of the baby food pouches into it. Then I could just put the lid on when E was done so the residue doesn’t make a mess in the diaper bag.

The third product, the Sippin’ Straw Sippy Cup, that I had the opportunity to try was my absolute favorite, though! This product is so ingenious I wish I had thought of it myself. Right now, E is at the point where he really likes sippy cups with the silicone straws. The only problem is that he doesn’t really understand that when you are using a cup with a straw you can’t turn the cup upside down, like he would with a bottle. The sippy has a weighted stainless ball, which follows the liquid, so no matter which way E holds the cup he can still get the drink.

All of these items, as well as other innovative baby products can be found on the Innobaby website. Go check it out!

About Me: Love of all things Historic

Injuries to Kids are Much More Traumatic to the Parents

This is a brilliant idea. I may just buy this for my new car.. My toddlers are messy. I always hate taking the car seats out ewww