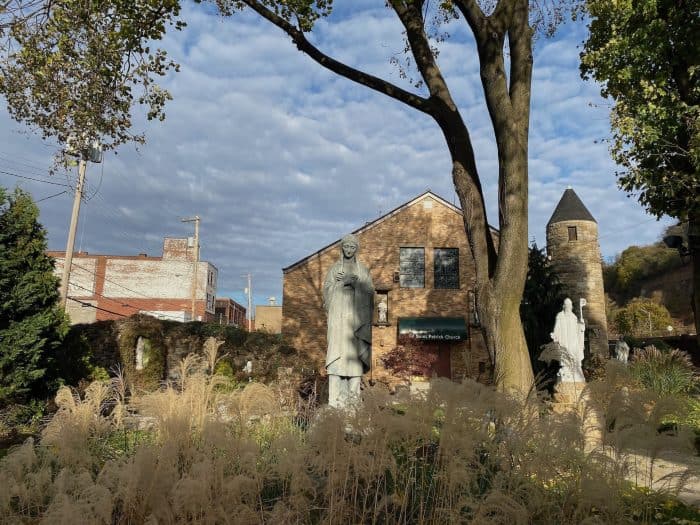 Tucked away on a side street in the heart of Pittsburgh’s Strip District is St. Patrick Catholic Church. From the outside the church is rather unassuming. It has a small, narrow tower and a simple brick exterior. A statue of St. Patrick stands out front. 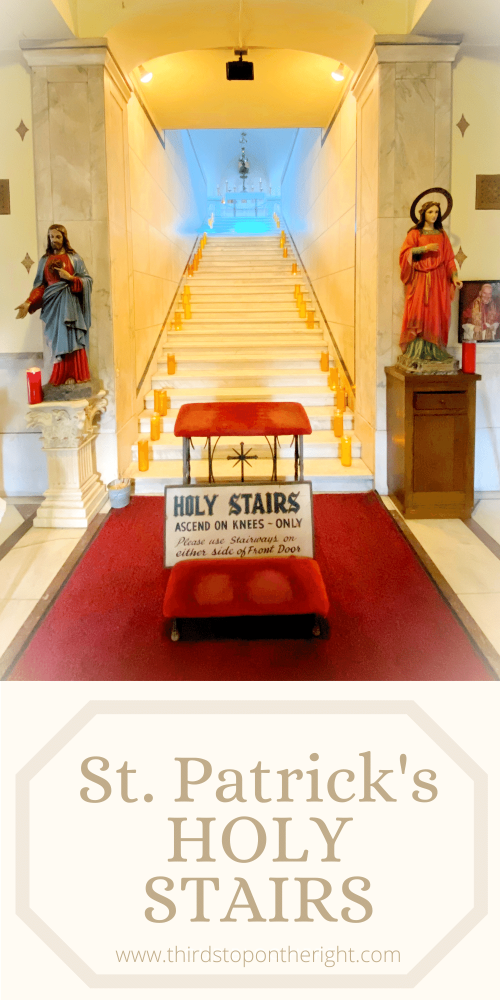 The building’s simple exterior belies the unique treasure that lies inside. As soon as you enter the front doors of the church you are met with a sign reading, “Holy Stairs, ascend on knees only.”

What are the Holy Stairs and Why Do I have to Kneel? 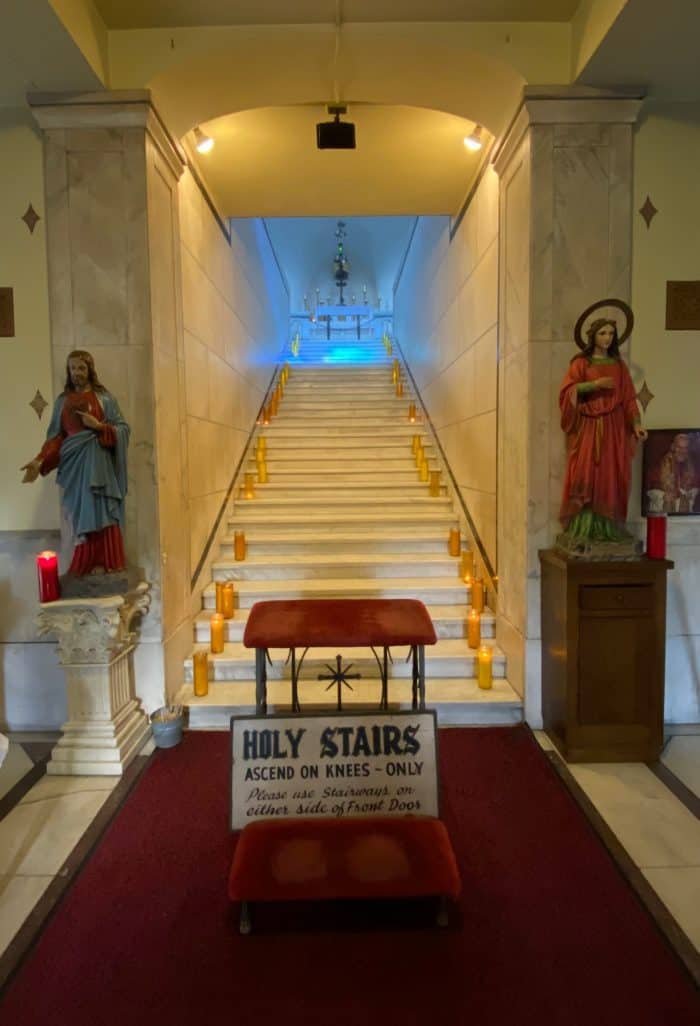 At the bottom of the Holy Stairs a sign reads “Holy Stairs. Ascend on knees — Only.”

The Holy Stairs or “Scala Sancta” located here in Pittsburgh consists of 28 stars which are a replica of the originals at the Vatican. These are one of only three sets left in the United States, the other two sets are located in Michigan. 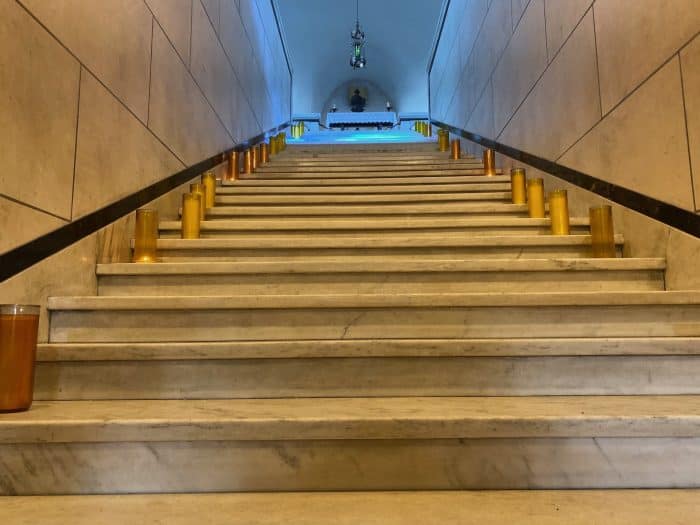 A view looking up the Holy Stairs.

According to Roman Catholic tradition, the Holy Stairs were the steps leading up to where Jesus was judged by Pontius Pilate during the Passion. The original stairs were reportedly brought to Rome by St. Helena in the fourth century after her conversion to Christianity. 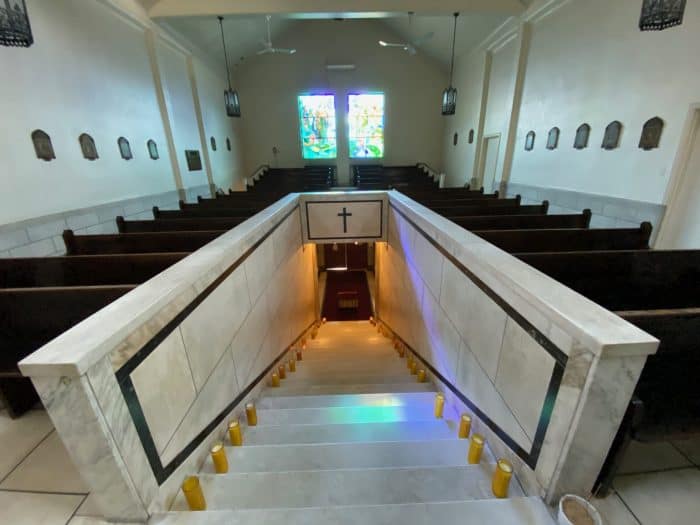 A stained glass window of St. Patrick looks over the church and the Holy Stairs.

Pittsburgh’s set of Holy Stairs were built in 1936 after the rebuilding of St. Patrick Church and were commissioned by Father James Cox. The white marble steps are meant to be ascended on the knees (which is not meant to be at all comfortable) and in prayer, with a prayer for each step. Those who wish to walk or who are unable to kneel can use a small side staircase.

Pilgrims regularly visit St. Patrick Church on Good Friday as they use the experience as a reminder of the pain of Jesus’ crucifixion. 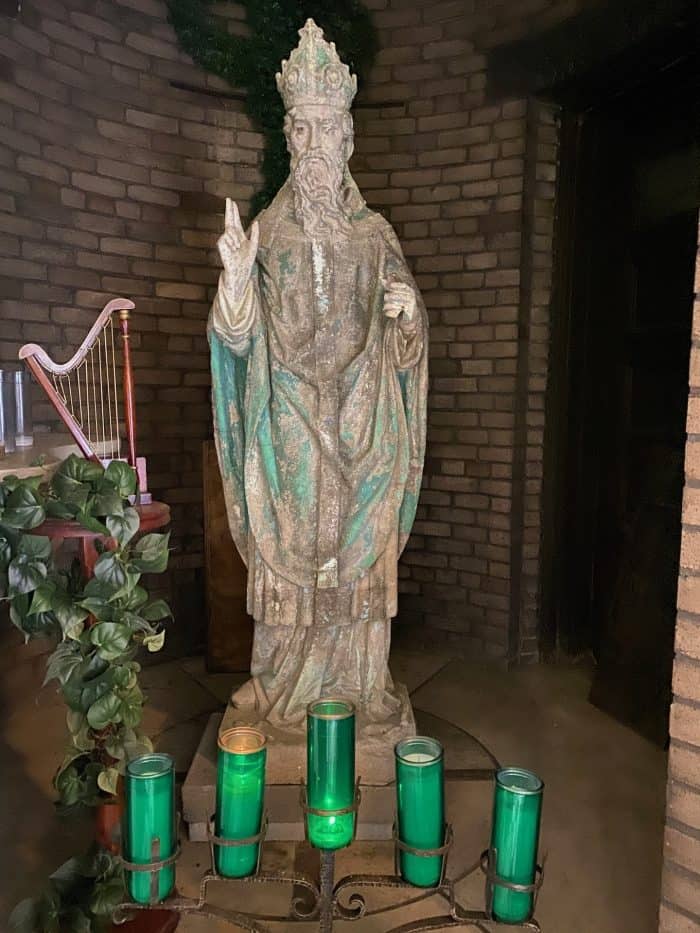 A piece of the Blarney Stone from Ireland’s Blarney Castle is located in the church’s tower above what was once the baptistery.

Aside from the Holy Stairs, there are some other interesting elements about St. Patrick Church. In 1935 the building the parish had used since 1865 burned down. When the church was rebuilt, a piece of the Blarney Stone from Blarney Castle in Ireland was placed in the church’s narrow tower. 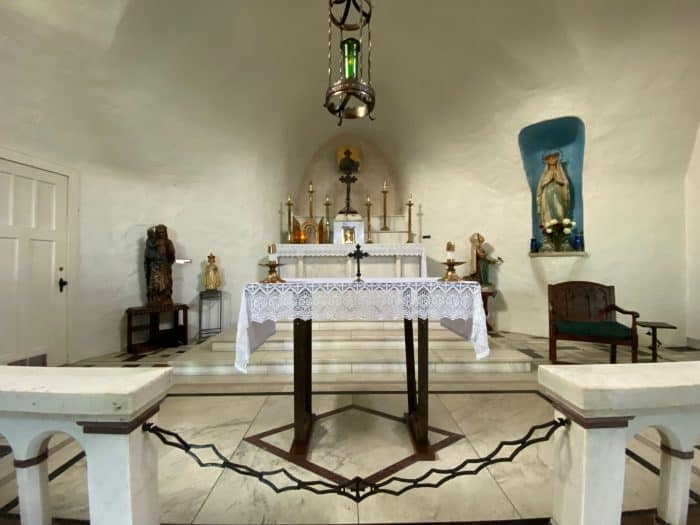 If you look to the left of the alter you can see an opening about the size of a brick where a radio announcer could see the Mass in order to broadcast it.

If you are in the main room of the church looking at the alter you may notice a small opening in the left side of the wall about the size of a brick. This opening had a very specific purpose. In 1925, WJAS radio began broadcasting Mass from St. Patrick. There is a slot in the wall behind the alter because the radio announcer had to be able to see what the priest was doing. These broadcasts lasted until 1958. 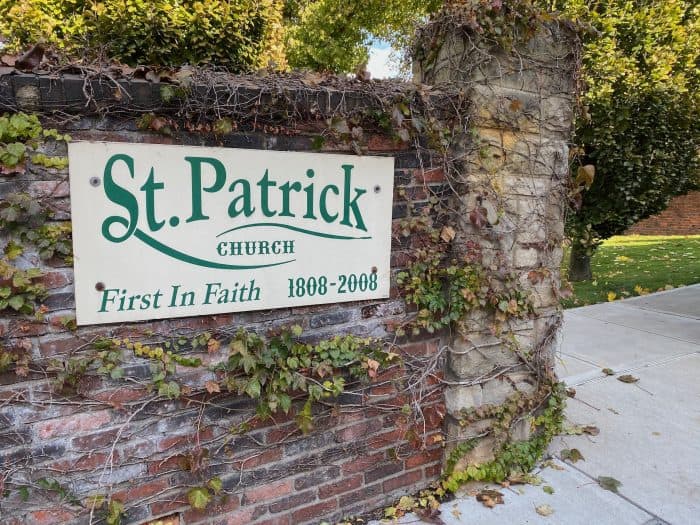 St. Patrick Church is now part of the Shrines of Pittsburgh Parish which are helping to preserve some of the area’s very unique religious history. Visit their website to find out when the church, and the Holy Stairs, are open to the public.