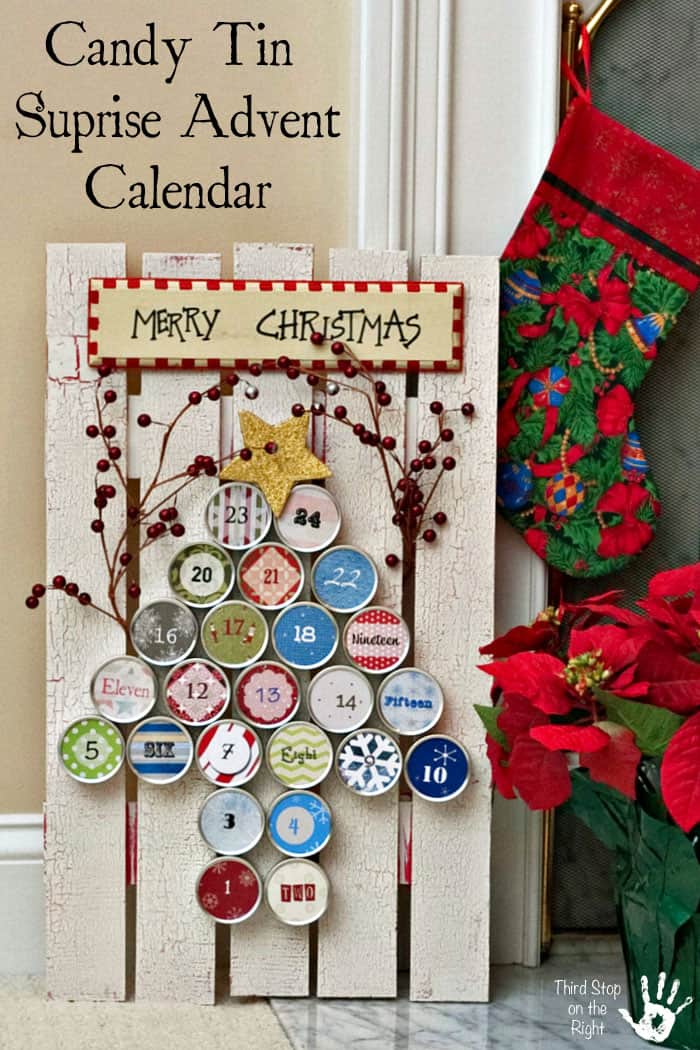 We are fully into the Advent season, or the countdown to Christ’s birth. This year is the first year that Little E really understands the Christmas story and since I want to always promote the real meaning of Christmas with the boys I decided to do an advent calendar with them.

The problem was that I couldn’t seem to find just what I was looking for. I wanted one of the kinds where you open the little doors and there is candy inside, but I also wanted to tell the Christmas story in a way that children could relate to.

After coming up empty at the stores, I decided to get crafty and make one myself.

How to Make an Advent Calendar

You will need some supplies to begin with:

I began by creating some circular labels with the numbers one through 24 on them. I did each number with a different background and used different fonts and ways of writing the numbers as well. I also made another set of the circle labels that had pieces to the Christmas story on them.

I specifically wanted my calendar to have the Christmas Story, but you could also do one with the Elf on a Shelf or even The Night Before Christmas if you wanted.

The circles are probably the most time-consuming parts of the project, but if you want to save yourself some hassle, I do have a downloadable version of the circles for sale in my Easy shop. Just purchase and download the files.

Once you have the circle files I recommend taking them to your local print store and have them printed on the sticker paper using a high-quality laser printer. After having the circles printed, I used a 2-inch diameter circle punch to punch out the stickers.

You will want to put the stickers into the inside on the tin so that when the lid is removed it reveals the part of the story.

I chose to use a piece of pallet wood as the backing. This will be what will hold the tins together. However, in the unpainted state it isn’t very attractive.

I recently bought a crackle paint glaze and I thought it would work great for this project. I painted the entire pallet red. After the paint dried, I put on a coat of the crackle glaze.

Immediately, I put on a top coat on which was an off-white. Once the coats dried, the red coat underneath came through.

I suggest laying out the tins in the formation you want to glue them in order to see how they will work. I chose to do a Christmas tree, but you could also just do a rectangle or even a star.

Once you have laid out the tins, you can begin gluing. I used a heavy-duty super glue so that I wouldn’t have any trouble with the tins falling off later. Put a layer of glue on the back of the tin and then stick it to the backing.

After attaching all of the tins to the board, it is time to fill the tins!

I put a small chocolate in each of the days. This way, they will not only be invested in opening the next day to see the next part of the story but also to get the candy.

I think that this candy tin advent calendar turned out really cute and it is something that I look forward to sharing with the kids for many years to come!