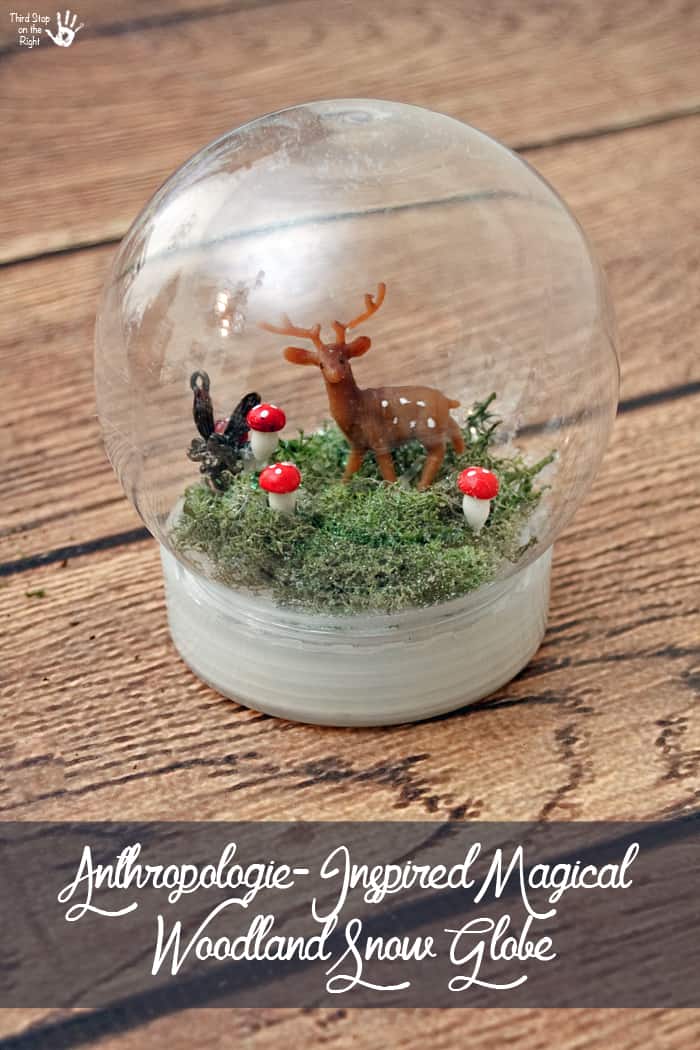 I have always been interested in this that are a bit whimsical. Although I don’t believe that they hold any special powers or anything like that, I still find things like fairies, moss, and mushrooms to be beautiful and a little mysterious.

The other day I saw these DIY snow globes and I knew that I had to make one of these magical woodland fairy gardens.

One you have all of the materials, making the garden itself is pretty easy.

The snow globe that I bought was a plastic one that can actually be used with water, so it has a piece that is put on the inside to make a watertight seal. This also serves as a great platform on which to create the scene. If your globe doesn’t have this piece you can also use a small, round piece of cardboard or just glue your materials to the bottom of the globe.

I began by gluing moss to the platform. I started around the edges and filled in any empty spots as I went.

I suggest using small pieces of moss. This way you will be sure that all of the moss stays glued down.

Next, I used the hot glue to adhere the deer to the moss and to the platform.

You will want to sort of bury the deer’s feet into the moss so you can’t see the glue.

I bought these adorable, little wooden mushrooms at the craft store the other day that I knew were perfect for this craft. The wire ends were a little long so I wrapped the wire in a spiral around a toothpick.

After I wrapped the wire to the mushroom around the toothpick I was able to glue it into the moss. I actually put several mushrooms into the moss.

Once you have everything arranged the way you want, its about time to close up the globe. I poured some fine, white glitter into the globe part of the snow globe.

If the snow globe you chose to use has the piece that seals it closed, I would suggest putting a layer of glue around the edges before screwing the bottom on.

Shake the glitter around in the globe so you have a fine layer of glitter over everything. This will give your globe an even more whimsical feel.

Now, all you have to do is place the globe on a shelf or a desk and enjoy it! Plus, this is something that your kids will love too!