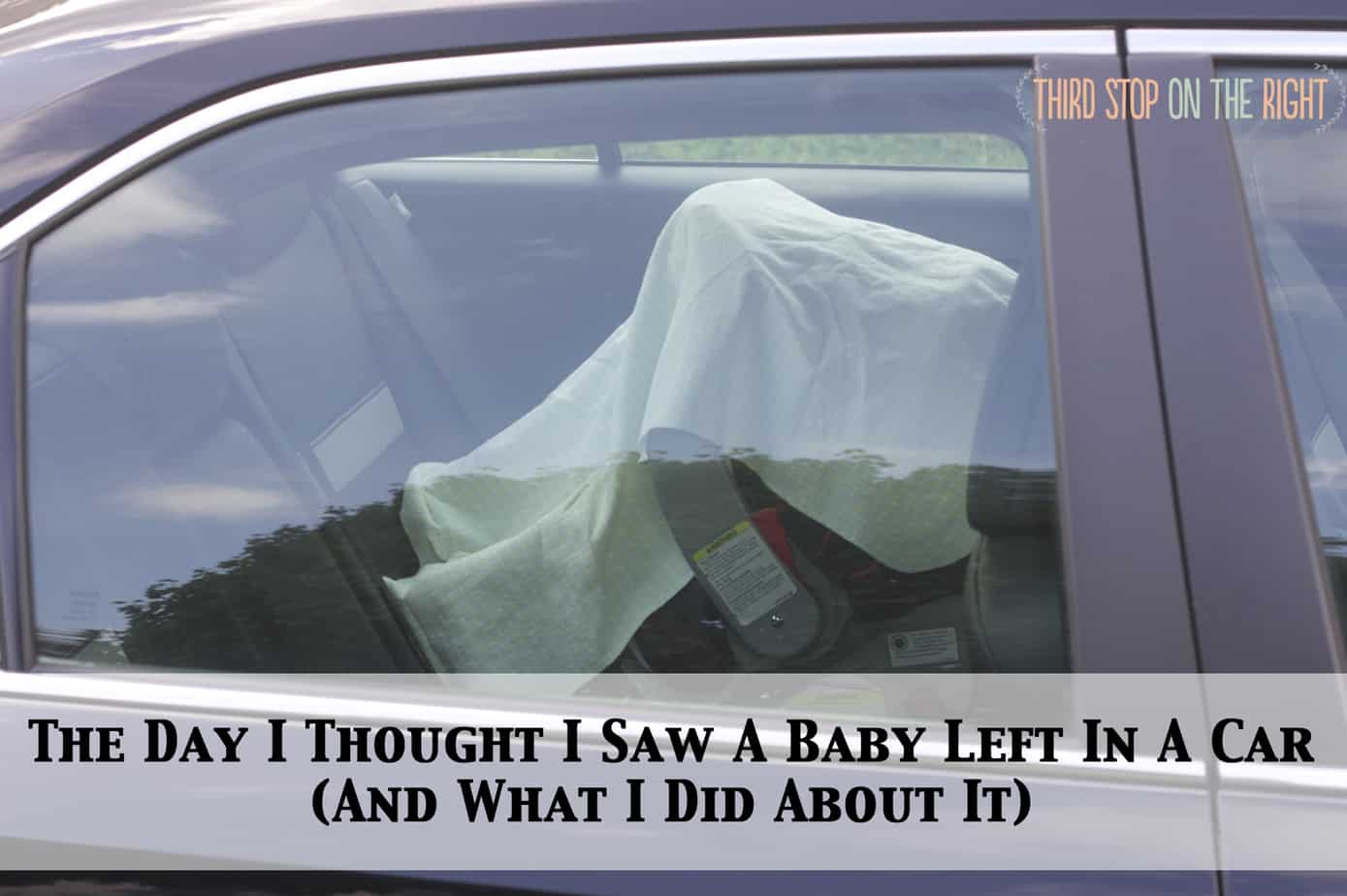 With so many stories in the news this past summer about babies dying after being left in a hot car, I felt compelled to write this post. Please read it and share with everyone you know. It could literally save a life.

I was leaving my OB appointment when I saw it in the car parked beside mine. There in the backseat was a baby carrier. No one was in the car and the carrier was covered with a blanket. I walked around the outside of the car and tried one of the doors. They were locked. I got back into my car and sat there looking at the other car.

I called my husband.

He assured me that there probably wasn’t really a baby in there and that it was probably another patient at the OB’s office who was just planning ahead for their new arrival. It made sense. I started pulling out of the space.

The “what if” was gnawing at me. I knew that if I read in the newspaper the next day that a baby died because it was left in a car, I would never forgive myself. I knew what I needed to do.

I’m not the kind of person to break a car window — unless of course I actually saw a child in the car. I called 911 and was connected to our local police department. I explained what was going on and that I didn’t think there was a baby in the car but I couldn’t be sure. This dispatcher said that they would rather check and be sure rather than have a tragedy later.

I stayed with the car and in just a few minutes the police officer arrived. He tried the doors (yep, still locked) and then got a kit out of his patrol car and used it to open the car.

After opening the door, the officer pulled the cover off of the carseat — and there (thankfully!) was no baby!

Of course I was relieved, but also felt a little silly for calling the police for what turned out to be a false alarm. I apologized to the officer and he told me that he would rather come check 100 cars and it turn out that there is nothing rather than someone be afraid to call for fear of being wrong and a baby die.

I drove away that day confident that there was no baby in danger and knowing that I had done the right thing.

Even after just a few minutes, the temperature in a car can rise to over 125 degrees. Children under age 3 in the most danger of being left in the car, as 87% of all children who die of vehicular heat stroke are ages 3 and younger. To learn more about how to keep your children safe in the car, visit the website Kids and Cars. Also, check out these information sheets that are available from Kids and Cars.

Rachel – Well done you! My husband is a Police Officer and we both totally agree that you did the right thing. We were out at a shopping centre not so long ago and my husband noticed a female crying whilst stood at the side of a car with a pram. She had locked her baby in the back of the car and left the keys in the footwell of the vehicle. New vehicles have mechanism to lock themselves if left a little while, and when lady was speaking to her partner on the phone, all of the doors locked automatically.

We stayed with her and the baby until Police officers arrived with the correct equipment luckily the baby was released a short time later.

Here is another fact – if you are in the RAC or AA they also will attend and open the vehicle and they do prioritise you, but obviously they won’t come if its not your own vehicle (In all instances call the Police).

The Police will attend calls like this if anyone feels a baby has been left in a vehicle, don’t ever feel silly because its far better to be safe then sorry. Rachel X

Rachel – I did a post not too long ago which actually had to do with keeping food safe when shopping during the summer heat and I used an example of how fast a car can heat up in just minutes and it is literally deadly. I am so glad you called 911 and I will be sharing this post on Twitter and Google. You are absolutely right about the need to educate the public – maybe if everyone keeps ‘harping’ on it, people will eventually get the message.
Lenie

Lenie, would you mind sharing your post about the food? I would love to see it. That would even be a great way to illustrate to readers what could happen when you leave things in the car. Put a plant inside a locked car that’s in the sun and see what happens.

Well done YOU!!! Unfortunately, most people would have walked away. I am so grateful to know that folks like you walk this earth…concerned, caring, and not afraid the “bother” the police. I’m so impressed…really!

Thank you! But I just thought of own own son (and one who was yet to be born) and knew I couldn’t walk away.

I thought you were going to bust that window wide open and save the day! Your method was much more rational and with the same result. Good for you. You must have been so relieved and felt a bead of pride at being a good citizen. Great post btw.

Hi Rachel – here is the link to my post
http://frugalforeveryone.ca/food-safety-summers-best-practices/

It shows if its 100 degreesF outside, the car will heat up to 140 degreesF in just 15 minutes.

Glad to help out.

I can’t understand leaving a child under 3 alone in a car no matter what the temperature.

I cannot imagine doing this to a child! I would not even leave my dog locked inside my car on a hot summer day. I salute you for being so vigilant in looking after things like this. It must have been such a relief to find that there was no child in that seat. I hope there would be a better info dissemination about the evils of this practice. Responsible parenthood is the key to prevent accidents like this.

I have a daughter who is almost 3 and half years old now. I can never think of leaving her behind. No matter how hard for me to carry or manage with stuff.. she will always be with me.
I do not want to do any such thing that I can regret about.
We read a lot of stories when people leave kids in car. and regret all life.

This was good decision to call police. It is better to go for that option then to be conscious that you can be wrong.