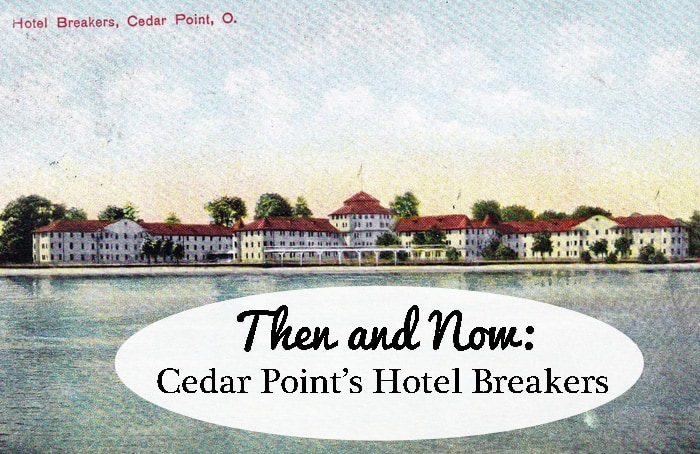 I love history and especially historic buildings. I just think of all the stories those walls could tell. Find out out what these stories are is sort of a mystery to me. I love seeing how a building has evolved and changed over the years.

I was only vaguely aware of the history of Hotel Breakers when I was invited to experience the completely renovated historic hotel located on the banks of Lake Erie. I am going to admit that as someone who loves historic architecture I was a bit wary. Often when historic buildings are renovated the facade might be kept intact, but inside it is often stripped of its historic elements in favor of a more “modern” design.

When I arrived at the hotel for the first time I was pretty impressed. I loved that as soon as we pulled into the parking lot there was a large replica sign from the early 1900s. There were also several of these large signs on the outside of the hotel.

My interest was piqued.

We went to the hotel before checking out the park. Although the lobby of the hotel was over 100 years old, I wouldn’t have guessed it. It has the clean, sleek feel of a newer hotel, however, the antique carousel horses and the pressed tin ceiling hinted at a grand past.

Since we were too early to actually check in, we went to the front desk and let them know that we were there. They let me know that they could send me a text when the room was ready. This was really convenient since we could go and enjoy the park and once we got the text we could go and take the bags to the room.

We walked around the hotel grounds a little bit just to get the lay of the land since this was the first we had ever been there. Right off of the main lobby was an amazing rotunda. It had these pendant lights that seemed to just float down from the ceiling, plus they drew your eye all the way up to the top of the rotunda. The exposed wood really makes you feel like you are at the beach.

Oh wait. We actually were.

Directly off of the rotunda area is a set of doors. Once you are outside of them you are on the boardwalk looking out at the beach and the waters of Lake Erie. There are beach chairs and umbrellas available for rent out on the beach, so if you aren’t at the park you can enjoy some time in the sun.

After finishing up at the park for the day, be sure to take a walk along the lake and take in a view of the hotel and the park when they are all lit up.

In addition to the beach, Hotel Breakers also features three swimming pools. One is your standard outside pool, another is a kid-centered pool (so cool!), and the third is a year-round indoor pool. This is in addition to Soak City, the water park located at the amusement park.

After getting the text and getting into the room, you wouldn’t have guessed that this wasn’t a brand new hotel. The room was done in modern white, grey, and reds. Even the desk chairs were made from recycled bottles. How cool is that? The room also had a dorm-sized refrigerator which is really nice to keep any drinks or snacks in, especially if you are staying a couple of days.

Later that evening when we were at the amusement park we stopped in the Town Hall Museum. Honestly, I probably would have missed it if my husband hadn’t pointed it out. If you love amusement park history — or any history for that matter — this is a must-see. Inside they have some really fascinating displays from Cedar Point’s history. One display in particular really jumped out at me. It was a huge vintage postcard display.

If you don’t already know, I love historic postcards and have a huge collection. I have even authored two postcard history books.

In the display they had all sorts of vintage postcards from over the years. Also included were postcards from Hotel Breakers. I twas amazed at how much it changed over the years. I wanted to find out more about its story, so I hit up my go-to place for buying postcards — Ebay. It was then that I realized how cool Hotel Breakers’ history as well as the renovation was. Instead of just telling you, though, I thought it would be much more interested to show you.

Hotel Breakers opened in 1905 featuring 600 rooms, a lobby, and a four-story rotunda with four tiers of balconies adjacent to the lobby. This postcard shows a few from the boardwalk area in 1910.

Eventually an East Wing and a West Wing was also added to the hotel. Sadly, however, those we removed in 1995 and 1999. As sad as it is to lose a historic piece of architecture I’m sure those wooden structures were difficult to maintain and also to upgrade.

This is the lobby now.

Here are the balcony tiers now.

Here is looking down from the first tier of balconies.

Here is something that I think is amazingly cool. Take a look at that stained glass piece in the 1930s lobby picture. I tis no longer in the lobby but I had this nagging feeling that I had seen it somewhere, when all of a sudden I realized that it is now located right inside the front door! My husband and I had been talking about the chandelier that is also inside the front door and that is where I had first noticed the stained glass. They had saved and repurposed it!

After seeing all of these amazing pictures and postcards from the past, I wish they would have paid more tribute to the hotel’s fantastic past both in the lobby and in the rooms. In the future, I would love to see some large placards that show historic images of the hotel and talk about the elements that were preserved.

However, I am just so glad that these elements were preserved for future generations. Our history can’t be replaced!

This was a great trip and although it was my first time to Hotel Breakers and Cedar Point, I will definitely be back!

I’m Finding My Inner Confidence While Preparing for Mudderella