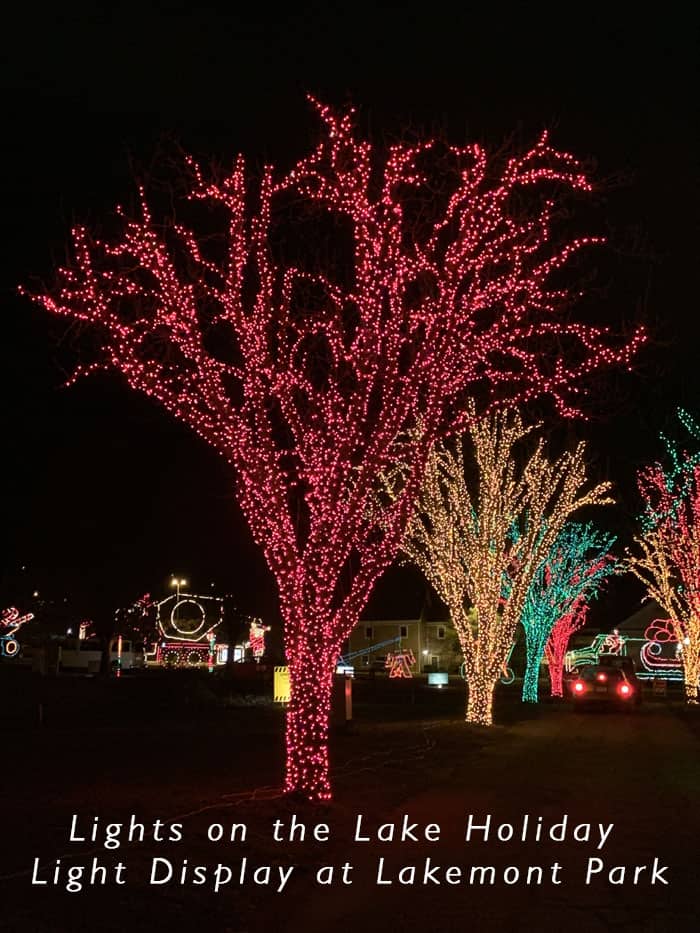 Lights on the Lake Holiday Display at Lakemont Park

It is a family tradition to go see light displays each year for the holidays. For the past several years we have stayed around the Greensburg area, but this year we decided to go on a bit of a road trip. I went to college in Altoona, Pennsylvania and years ago I visited the historic Lakemont Park. I knew that the park had put on a Lights on the Lake display each year, but I had never seen it for myself. This year, I decided to change that.

With just three days until Christmas we loaded the boys into the car and made the drive from Greensburg to Altoona. Its only about an hour and a half drive and there was actually snow on the mountains so it made for a vert y pretty drive.

The Lights on the Lake display runs from the middle of November to the beginning of January each year and is open every night from 6 p.m. The entrance is actually located at the back of the Altoona Curve stadium, and the path winds through Lakemont Park. While I said the gates don’t actually open until 6, you will want to be there early since the line gets pretty long pretty quickly. We were in line at 5:30 and there were a lot of cars ahead of us.

Each vehicle costs $13 for a standard car, $25 for a commercial van, $30 for a school bus, and $80 for a motor coach. You are able to pay in cash, or by card so you don’t necessarily have to have cash on you. The displays are each sponsored by a different local business, and the proceeds benefits local nonprofits.

As I said before, the path starts at the back of the Altoona Curve stadium, on the far back corner of the park. You are first greeted with a look at the Skyliner, one of Lakemont Park’s two historic roller coasters.

The path winds along the mini railroad with beautiful displays. The train is even parked in the station with Santa Claus driving it. (Something interesting to know is that Lakemont’s C.P. Huntingdon train is actually the same as the one you can find at Idlewild and SoakZone.)

Be sure to keep a lookout for Leap the Dips, the park’s premier historic coaster and National Historic Landmark. In fact, this is the last-known side-friction roller coaster and the world’s oldest operating roller coaster.

The path continues winding through fifty-one acres of park grounds with hundreds of different displays.

My favorite was a series of lighted trees. It actually reminded me of when we saw Christmas lights at Phipps Conservatory.

By the way, how fun is it that the display featured a banana split. This is relevant because we are from Latrobe, which is actually the home of the banana split!

After taking in the beautiful lights, you can park and visit Santa’s Village. The village consists of a snack bar and photos with Santa, but the most important part was the miniature railroad display. This is probably one of the nicest displays I’ve seen recently and the boys absolutely loved it. It was absolutely worth the trip.

Currently, Lakemont Park is undergoing extensive renovations for the 2019 season, after being closed for the past two seasons. I am really looking forward to taking the boys back to Altoona this summer and particularly experiencing the Leap the Dips as well as the Skyliner — a unique L-shaped roller coaster.

If you are interested in visiting the Lights on the Lake display, you can visit the Lakemont Park website. Its a great way to help support not only the historic park, but also to help support local nonprofits. This display is definitely at the top of my must-do list.