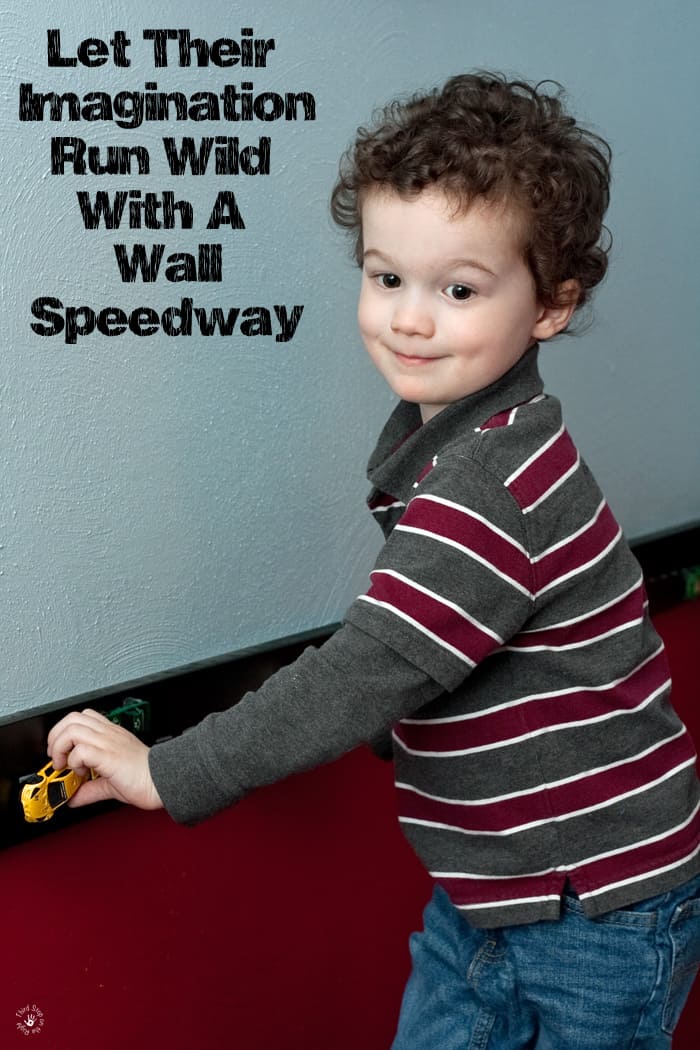 Let Their Imagination Run Wild With a Wall Speedway

This shop has been compensated by Collective Bias, Inc. and its advertiser. All opinions are mine alone. #RaceDayRelief #CollectiveBias

My son loves race cars. We love watching the races on television together and finding fun race car-themed things. In fact, he loves race cars so much that when it came time to switch him to his “big boy” room, I decided to go with a race car theme. I bought him a race car bed, made a checkered flag blanket, and even made some race car wall panels.

One of the things I have been meaning to do is to create a speedway border around him room. This way his play doesn’t have to stay on the floor, and it actually looks like a professional speedway!

Little E has a chair rail which wraps around the room, so I removed the old rail and replaced it with a thick piece of trim that I painted black. This is what will eventually be the race car track.

Next, I used a piece of painters tape and stretched it across the middle of the piece of trim. Using a white paint pen I drew dashes along the edge of the tape. I found the paint pen was the easiest to use as I could get nice, straight, thin lines with it moreso than I could do with a paintbrush.

After the paint has dried, peel the tape off of the trim and you will have a dashed middle line that looks like a road.

Now it is time to add the cars. I picked out several die cast or plastic cars, loaded up the wheels with a combination of hot glue (for the instant hold) and industrial glue (for the strength) and glued them to the road.

After everything has dried, it is time to start playing. The boys had a blast “driving” their toy cars along the speedway, weaving in and out of the cars that are attached to the trim. They also loved that they could play with the cars all along the edges of the room. Plus, when they were done playing they could stash their cars in the toilet paper car garage that I made them.

Even without the entertainment factor, this speedway wall decoration is really cute and would look perfect in any little boy’s bedroom.

Between cheering on our favorite driver, Ty Dillon; decorating a preschooler’s bedroom, headaches, or whatever else life throws at me, I know that I can depend on the fast acting power of Advil Film-Coated to relieve my aches and pains.

What is really cool about this new Advil Film-Coated is that it uses a unique Advil Ion Core Technology and an ultra thin shell so that the medication is able to absorb quickly. In fact, nothing is proven to work faster* (*Among OTC pain relievers).

Whatever causes your aches and pains, don’t let it get in the way of your life — or watching the Duck Commander 500 (with Ty Dillon driving the Nexium car, but will be driving the Advil car later in the season!) on April 9.

Comment On: Headache, backache, or any ache: What ache will you use Advil Film-Coated with?

Strengthen Your Relationship with 5 Love Languages

Love love love this idea to decorate a boy’s bedroom or their playroom!!! Thanks for the inspiration!

What a cute idea! I love how custom this is and perfectly suited to your little man’s interests! #client