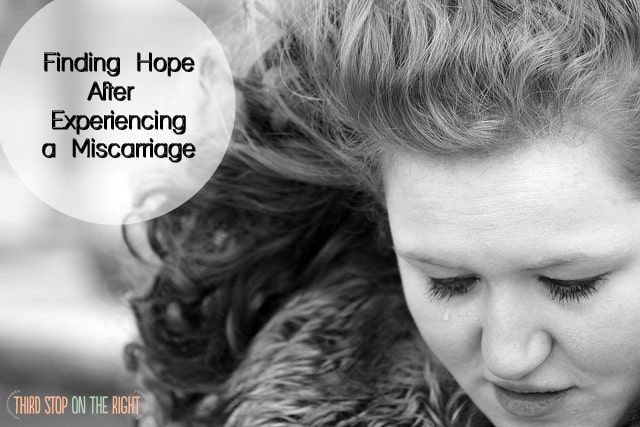 Finding Hope After Experiencing a Miscarriage

October just isn’t for Breast Cancer Awareness, it’s also the month of Pregnancy and Infant Loss. Although the idea of losing a pregnancy might seem unfathomable, it is a sad reality for more than a quarter of all women. What is important is realizing that you are not alone. Although I have been blessed to have two successful pregnancies, I know there are so many other women out there that are hurting. I felt like I would be doing these women a disservice by trying to write a post about pregnancy loss myself, which is why I asked a dear friend who recently experienced a miscarriage to write about her experience. It is my hope that by sharing Sierra’s story that it will help bring closure, and bring hope, to other women who might be experiencing a pregnancy loss. Here is her story:

This past April, my husband and I decided we wanted to try for another baby. We wanted our children close in age and our daughter was already a year and a half old. So we tried. I took a pregnancy test a couple weeks later and it came up negative. I was disappointed. My husband had just left for Army training for five months, so now we would have to wait five more months before trying again.

I then began noticing that I was tired all the time. I decided to take another pregnancy test, and this one was positive! I was so happy, but since my husband was away at training I had no one to share my joy with. I wrote my husband a letter and couldn’t wait to find out his reaction. I wanted him to know first before I shared the news with anyone else. I waited in anticipation until I finally heard back from him about a week later. After my husband knew, I told a couple friends and some of our family. I was so overjoyed that we would be having another baby!

Then, I started bleeding about a week later.

At first I thought it was just spotting. I knew something was wrong. I was with my mother at the time and I told her I wanted to go to the hospital. They sent me for an ultrasound and while I was in the bathroom changing my hands shook — I was so nervous to what they’d see. The technician started the ultrasound. I searched the screen until I saw it — the baby’s heartbeat! I was so relieved to see that little flickering blip on the screen.

I went back to the room and the doctor told me that I was seven weeks along and that everything seemed fine. I wasn’t reassured. I went home … and continued bleeding.

I followed up with my OB/GYN that Friday. Before the appointment, however, I had to have blood work done. The office secretary called and told me that my hormone levels had dropped from 5,000 to 1,000 in two days. This wasn’t good. I prayed every second of my drive to my doctors. Maybe they were wrong. Maybe everything was fine. I had just seen the heartbeat two days ago.

I went to my appointment alone. I walked into the office and waited. And waited. And waited. Finally, they called me back to the room. The technician said that she was going to do an ultrasound. This time, however, instead of that little blip, I saw nothing. I asked, “There’s nothing in there, is there?” She said I would need to speak with the doctor. After she took a million pictures I got dressed and walked into an empty exam room. I waited for my doctor to tell me what I already knew.

After what seemed like an eternity, the doctor came into the room and just shakes her head and said “I’m sorry but theres nothing there.” I asked whether there was a heartbeat and she told me there wouldn’t be a heartbeat with hormone levels as low as 1,000. She said I’ve miscarried but I hadn’t passed the baby yet. She then proceeded to tell me that all that is in there is mush. She just said that I had lost my baby, and then called it mush as if it had never really even been alive? I was torn apart.

I passed the baby that Sunday. I was sick to my stomach, I knew it was all really over. What made it worse was that I had to go through it alone. To be honest, I kind of resented him for not being there. I know he couldn’t help it. I just felt so alone. All I wanted to do was sleep and be left alone, but I couldn’t. I had my daughter with me. She made me feel better. Hearing her silly laugh and seeing her beautiful smile, it distracted me throughout the day.

Then nighttime came. That was the worst. You overthink at night. I started blaming myself for what had happened. All the mistakes I made that maybe caused the miscarriage. I started staying up late just so I’d be so tired, I would just go to bed. That way I wouldn’t have to lay in my bed alone thinking of everything.

Although people are good intentioned, them saying things such as “It just wasn’t meant to be,” or “Maybe it’s God telling you it wasn’t the right time,” just aren’t helpful. I don’t want to hear that maybe it wasn’t the right time for this baby. I just want my baby! I know that it is jut because people don’t know what to say, but please, if you know someone who has gone through a loss please don’t try to say something that will make them feel better. Just hug them. Support them. Cry with them if they need it. If you can, talk with someone who has gone through it. I have a friend who has been through four miscarriages and she was who helped me through this time since she had been there herself.

Even through it has been almost five months, I still think about the baby all the time. How far along I would be now. Whether it was a boy or a girl. What they would’ve looked like. I regret not taking a video of the baby’s heartbeat when I was in the hospital so I could still see the baby.

I tell my husband that I can’t wait to get to heaven to meet our sweet baby. It’s not fair. I feel that if we try again, I’ll feel so guilty. Guilty for wanting another baby. I think parents who have lost a child may know what I’m talking about. You just want everything that was back. The pregnancy, the heartbeat, the kicking, the peeing four times a night.. the baby.

I can tell you, you never really get over something like this. Yes, the pain decreases over time. But there will always be a part of your heart that is missing.

On October 15, we celebrated Remembrance Day. My husband and I, along with our daughter, released balloons to heaven. The thing is, we don’t have to just remember one day a year. Everyday can be Remembrance Day. Just know that even though you might feel alone, you don’t have to go through this alone. Know there are people out there who will give you support and love. Do whatever you need to do to help you get through this.

I had a miscarriage in June 2014… it’s still fresh in my mind and I think about what my baby would have been like growing up. Thanks for sharing your story! I have shared mine too and it helped me feel a little better!
good luck…
jessica

Well done on sharing this. You are incredibly brave to do so.

I lost mine at 8 weeks but didn’t know until between 11 & 12 weeks. I was almost to the time I could start telling people.
That was in May 2014. I’ve now been passed the due date and on that day released balloons with my family (I have 2 daughters and my husband).
I’m now heading towards a year since we conceived and that’s now bringing up the feelings again, and then it’ll be 12 months since the MC. So it’s definitely ongoing for me.
I’m having a hard time finding the motivation to be happy and get on with life. I feel like everyone else’s life is carrying on as normal and I’m completely stuck.
I know I’m not alone in this grief, even though everyone’s grief is only their own. I know I’m lucky to have my family. I still feel like it’s incomplete.
Thank you for sharing your story and for the opportunity for me to share mine. Hugs!