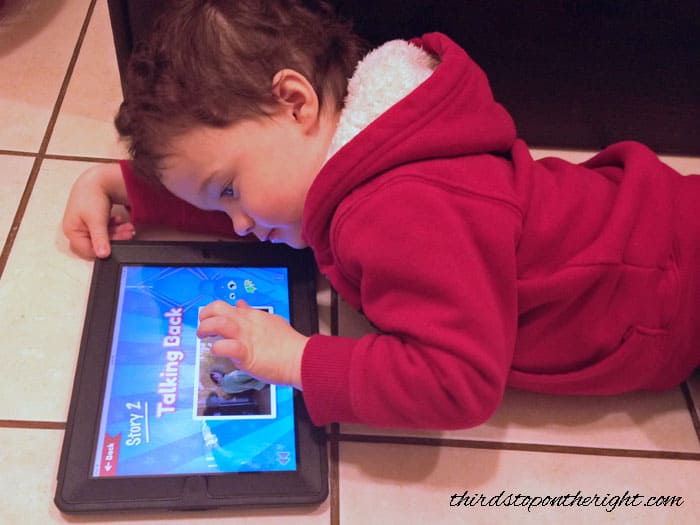 They say that after the “terrible twos” come the “terrific threes.” I have to say that so far — they are lying! Maybe its because E is becoming more of a free-thinker or maybe it was the addition of Baby R, but needless to say I feel like I have been doing a lot more disciplining recently. When E was younger, I could excuse some of this bag behavior because he was too young to really understand what he was doing wrong. Now that he’s 3, he does know better. It’s now my job to make sure that E doesn’t grow up to be a little heathen and I teach him how to behave appropriately.

Kids don’t want to be preached to. We can firmly correct them, because thats our job as a parent. But, what if we were able to make learning appropriate behaviors fun?

The new teach2talk Behaviors with Friends iPad app uses targeted video modeling to help teach your child how to behave appropriately, solve problems, make good decisions, and properly communicate with their friends and other peers in common social scenarios and settings. Lessons focus on common behavior problems for children such as:

As soon as I downloaded the app, E was excited to use it. In fact, he laid down on the floor and spent probably an hour interacting with it. He watched the videos and was easily able to navigate through the program. He even told me about some of the stuff he learned and remembered specific details about the videos.

teach2talk was developed by co-founders Sarah Clifford Scheflen, MS, CCC-SLP, and actress and New York Times best-selling author, Jenny McCarthy, which strives to introduce new and innovative products to the market and also to improve existing products based on the latest developments in scientific research and on feedback from the parents, teachers, therapists and other professionals who use the products.

“Behavior issues are a common complaint from parents. Parents need strategies to help teach their children how to behave. Behavior with Friends not only teaches children how to behave appropriately, but also provides tips to parents on how to implement their own behavior modifications,” says Sarah.

Jenny, whose son Even has autism, understands every mother’s desire to help their children achieve their full potential, and was frustrated by how difficult it was as a parent to find quality educational products which she could use by herself to help her child in her own home.

Jenny says, “All parents want their kids to have friends. Traveling around the world, I met so many parents who said, ‘I don’t know how to deal with my child’s behavior problems!’ So we made these videos to help teach children and their parents how to resolve common behavior problems with friends.”

The teach2talk Behaviors with Friends iPad app is available through the iTunes App Store for $4.99. You can also keep up with teach2talk on Twitter, Facebook, or through their website.