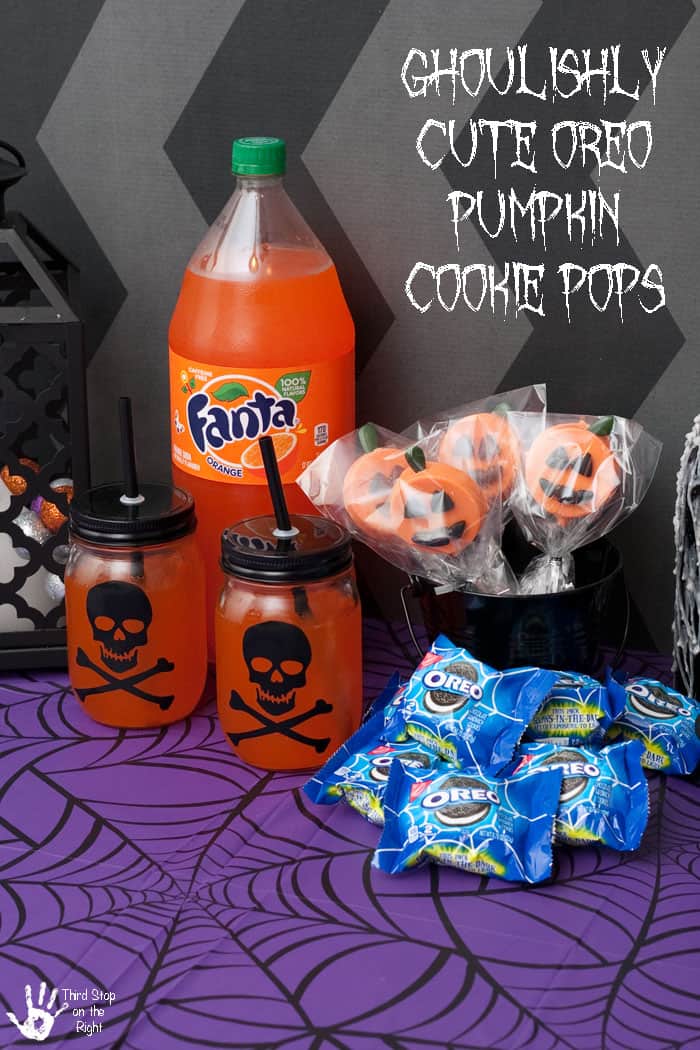 This shop has been compensated by Collective Bias and its advertiser. All opinions are mine alone. #SpookySnacks #CollectiveBias

I love celebrating holidays. That doesn’t just mean Christmas, but also Valentine’s Day, Easter, Fourth of July, Thanksgiving, and of course Halloween. In fact, as far as decorating goes, Halloween is one of my favorites!

This year I decided to make some adorable pumpkin OREO cookie pops. They turned out adorably cute, and after working out a few kinks, they were pretty easy to make. Plus they are great table decorations and/or favors for your spooky Halloween get-together.

I have always loved making chocolate-molded treats and have used meltable chocolate for party favors as well as sweet treats for at home. All you need to make these OREO cookie pops are cookie molds, orange meltable chocolate wafers, Wilton Jack-O-Lantern face pieces, and sticks.

I chose the limited edition OREO cookies with the glow-in-dark wrapper which are not only perfect for making these Halloween treats, but also for passing out during trick-or-treat! I also picked up a 2-liter and some cans of Fanta. More later on how Fanta is the perfect pairing for the cookies.

Place the sticks in the filling in the center of the cookies. I would suggest using flat sticks, similar to popsicle sticks, instead of the cake pop sticks as sometimes the cylindrical stick will push the two sides of the cookie out too far.

Melt the chocolate wafers in a glass microwave-safe container in 30 second increments on half power until all of the wafers are melted and the chocolate is smooth. You want to make sure not to overheat it or risk burning the chocolate. Fill the cookie mold approximately 2/3 of the way and then gently press the OREO into the mold so that the edges are covered. I suggest pushing on the edges of the cookie instead of the middle as this way there is less of a chance of the cookie breaking.

After you have placed all of the cookies into the molds you will need to put them into the refrigerator for about 15 to 20 minutes to allow the chocolate to cool and harden. At this point, some of those cans of Fanta were calling my name (yes, I know my sweet tooth…) so I decided to open a can while I was decorating for a Halloween party. Plus, it was really hot in our house so I needed a drink!

After the chocolate has hardened, just gently twist the mold to release the cookie pops. Lift them out and now it’s time to decorate! This is when you will need the Jack-O-Lantern face pieces as well as some writing gel to attach the features. Put a tiny drop of gel on the back of the eyes as well as on the back of the mouth. Don’t use too much or it will squish out.

Then put it in the refrigerator again to allow the gel to harden.

After hardening, all you have to do is put a wrapper on the cookie pop and then they are ready to be the perfect favor for your spooky Halloween party!

Now that you have your Fanta and OREO cookies both to pass out to the trick-or-treaters as well as the cookie pops you should be all set. Whether you are throwing a trick-or-treat party, where you party while passing out the treats, or are just planning your own get-together, Fanta and OREO are the perfect combination.

Oh, there is one other thing that I forgot to mention. Look at what happens to the OREO packages when  the lights go out! The fact that they glow-in-the-dark is so cool and I am sure that any trick-or-treaters you have will LOVE them.

You can pick up Fanta in 12, 20 or 24-pack cans, 8-pack mini cans, and/or 2-liter bottles as well as the special glow-in-the-dark package OREO cookies at your local Walmart. The Fanta is found with all of the other sodas, while the OREO cookies are either with the Halloween candy or in the cookie isle.

Want some more inspiration on how to use OREOs and Fanta to make your Halloween party great? Evette Rios, host of the CBS show Recipe Rehab is creating a custom, Walmart-exclusive recipe that combines both Fanta and OREO products. Since this recipe is a Walmart-exclusive you will only be able to find it here.

Comment On: What are some of your ideas for creating some spooky snacks this Halloween?

Seven Ways to Relieve Colic and Have a Happier Baby!

These pumpkin oreo pop are adorable. I know they’d be a hit at any party.