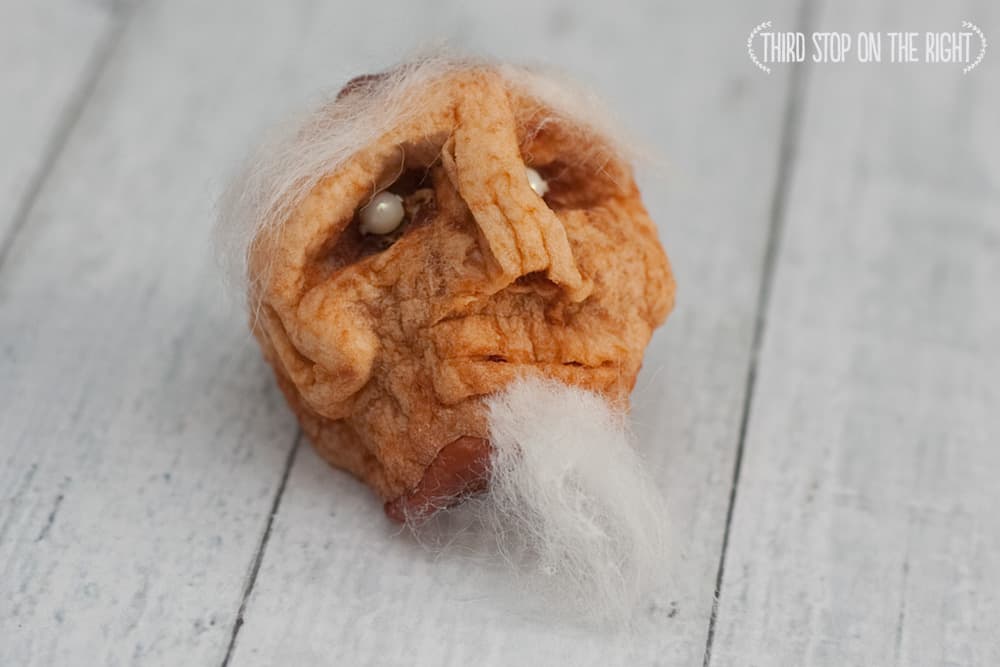 Make Your Own Halloween Carved Apple Shrunken Head — So Creepy!

Forget pumpkin carving this Halloween! Check out this creepy way to carve an apple and make it into a shrunken head!

My husband and I were talking one day and he was telling me about how he would carve apples and bake them so they would look like a shrunken head. I thought this seemed like a really neat idea so we decided to try it with the kids. I have to say that I was really surprised and how cool-looking these came out!

How to make a Carved Apple Shrunken Head

Materials you will need:

For this you will want a relatively fresh apple as well as a sharp knife that you will be able to carve with.

You want to begin by completely peeling all of the skin off of the apple.

Cut a rough outline for where you want the nose into the apple. You can see my husband has done this right above his right thumb.

The next step is to start hollowing out where the eye sockets and cheek bones should be. As you do this, the outline of the nose that you cut will start to become more pronounced.

Continue chiseling away at the cheeks and eye sockets until you can clearly distinguish the eyes, cheek bones, and nose.

After you have carved the eyes, nose, and cheekbones, cut an indentation for the mouth.

Carve away a small bit on the sides so you will have a lump on each side which will be the ears.

Remove any excess apple to define the features or to add extra detail. You can see my husband has cut slits into the nose so they will look like nostrils.

Once you have gotten all of the details the way you like them, it is time to bake the apple!

You don’t want to burn the apple, but simply dry it out. To do this, put the apple on a cookie sheet and put it in the oven on 150 to 200 degrees. You should probably leave it in for about five to six hours or until the apple looks thoroughly dried.

After the apple has dried you can add decorations such as craft hair (I used for a goatee and hair) and also beads for the eyes. I have also seen people use thread to sew the lips together. Be creative!

When you are done you will have a super-creepy shrunken head that you can display at your next Halloween party which will be sure to get tons of attention! You could also make a bunch of these and create a shrunken head tree!

12 Books You Should Read Before You Die

[…] Forget pumpkin carving this Halloween! Check out this creepy way to carve an apple and make it into a Carved Apple Shrunken Head. […]