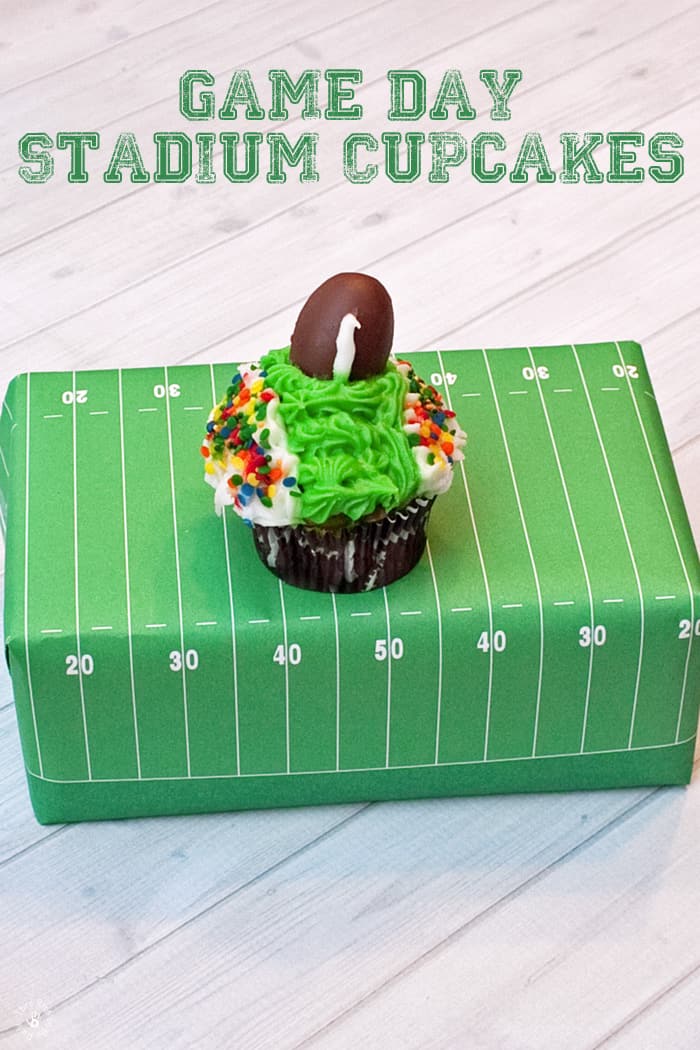 Sunday is the big game! Although our home team is not playing, it doesn’t mean that we won’t be watching the game and enjoying some delicious treats! I originally featured these Game Day Stadium Cupcakes in my Pretty in Pink football party, but they are perfect for any football-related get-together. Plus, I can pretty much guarantee that no one else will have cupcakes that are this creative!

These team-neutral cupcakes are meant to look like a football field with the crowd in the stands. These are the perfect cupcakes for a beginner decorator too!

I began by making a batch of cupcakes and used some Wilton football-themed Color Cups. Now it is time to ice the cupcakes.

Using some green Wilton Icing Pouch, I used the star tip decorator (which comes with the pouch!) and made a green strip down the middle of the cupcake. This will be the grass playing field.

Still using the star tip, you will want to use a white Wilton Icing Pouch to create the stands on either side of the field.

To make the fans in the stands, you will want some circular multicolored sprinkles. You will probably want to shake some of these out into a small bowl since it is often delicate to sprinkle on the cupcake. Only put the sprinkles on the white part.

I found some great football-shaped chocolates at our grocery store, so I decided to use them as the field centerpiece. I used a white icing pen and drew the laces on the football. I then placed the football in the center of the football field, looking as if it is about to be kicked off!

No matter which team you are rooting for in the big game this Sunday, these Game Day Stadium Cupcakes are sure to be winners!

Deal Alert! Save $6 on K-Y® TOUCH® In Time for Valentine’s Day