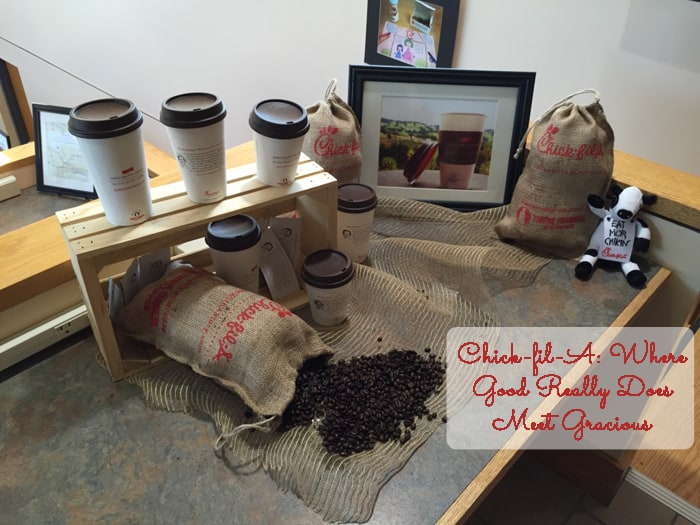 I recently had the opportunity to partner with The Motherhood and Chick-fil-A. Although I was compensated for attending the event and writing this post, all opinions are strictly my own. #CFAPittMoms #CHICKFILAMoms

We live in a day and age where we tend to look at large corporations rather skeptically. We are somewhat unsure of their underlying motivations. So when a company comes along that claims to not only embody wholesome family values, but also be good stewards to the community that they serve, naturally it seems almost too good to be true.

The difference is, this time it is true.

I have always admired Chick-fil-A. They are a company who stands up for their values and beliefs. It is a company that still follows the vision of its founder, Truett Cathy, more than 45 years after the first Chick-fil-A opened. In addition to making the delicious chicken sandwich for which they are known, Chick-fil-A aims to create an environment that is welcoming and feels like home.

I had the opportunity to spend an evening with several of the Pittsburgh-area Chick-fil-A owners, the regional marketing director, and other mom bloggers who also love Chick-fil-A. There, I was able to find out first-hand more about what Chick-fil-A’s values and mission. As a faith-based organization, I was really happy to know what many of their core principals aligned with my own values. This includes giving back to the community and never putting profit over people.

Chick-fil-A is founded on the premise that kindness is a higher calling, and that giving generously can help grow good. I’m sure that you have read the story of the Chick-fil-A owner in Birmingham, Alabama who not only passed out hundreds of free Chick-fil-A sandwiches to to stranded interstate motorists after a snowstorm, but also opened the restaurant to anyone needing a warm place to stay. Of course, he didn’t have to do any of that. However, since all Chick-fil-A franchises have local owners, it means that the owners as well as the employees are not only invested in the community they serve, but they are also part of it.

It is this desire to be an integral part of the community that drives Chick-fil-A to be who they are. Many people recognize the “Dress Like a Cow” day and “Income Tax” day, but in addition to these there are also lots of other family-friendly activities such as Kid’s Club, father and daughter nights, and even mystery dinner events.

These events are meant to help build strong communities and strong family bonds through teaching values such as courage, honesty, selflessness, and more. These are the same values that Chick-fil-A embodies.

The event I attended was a great example of how even through small, private events Chick-fil-A makes an effort to support noble causes. The bloggers who were in attendance received a beautiful keepsake box. Upon further discussion with the marketing director, I found out that the boxes were made by Lamon Luther, a company who teaches carpentry to homeless men as a means to get back on their feet by giving them a job making farm-style furniture.

The event itself was held at the Manchester Bidwell Corporation, a Pittsburgh-based organization that provides career training as well as arts education to students of any age, free of charge. It is the hope of Manchester Bidwell that by providing a safe, positive environment it will be able to not only keep young people off of the streets after school where they are most at risk, but also provide a creative outlet as well as provide relevant job skills. According to their website:

By providing encouragement, opportunity and resources, we strive to keep community members, young and older, on the positive side of the social balance sheet.

As you can see, Chick-fil-A’s positive impact reaches far beyond their restaurant dining rooms, touching the surrounding community and beyond. This is a company that I am so proud to be aligned with and I can’t wait to see what is to come in the future!