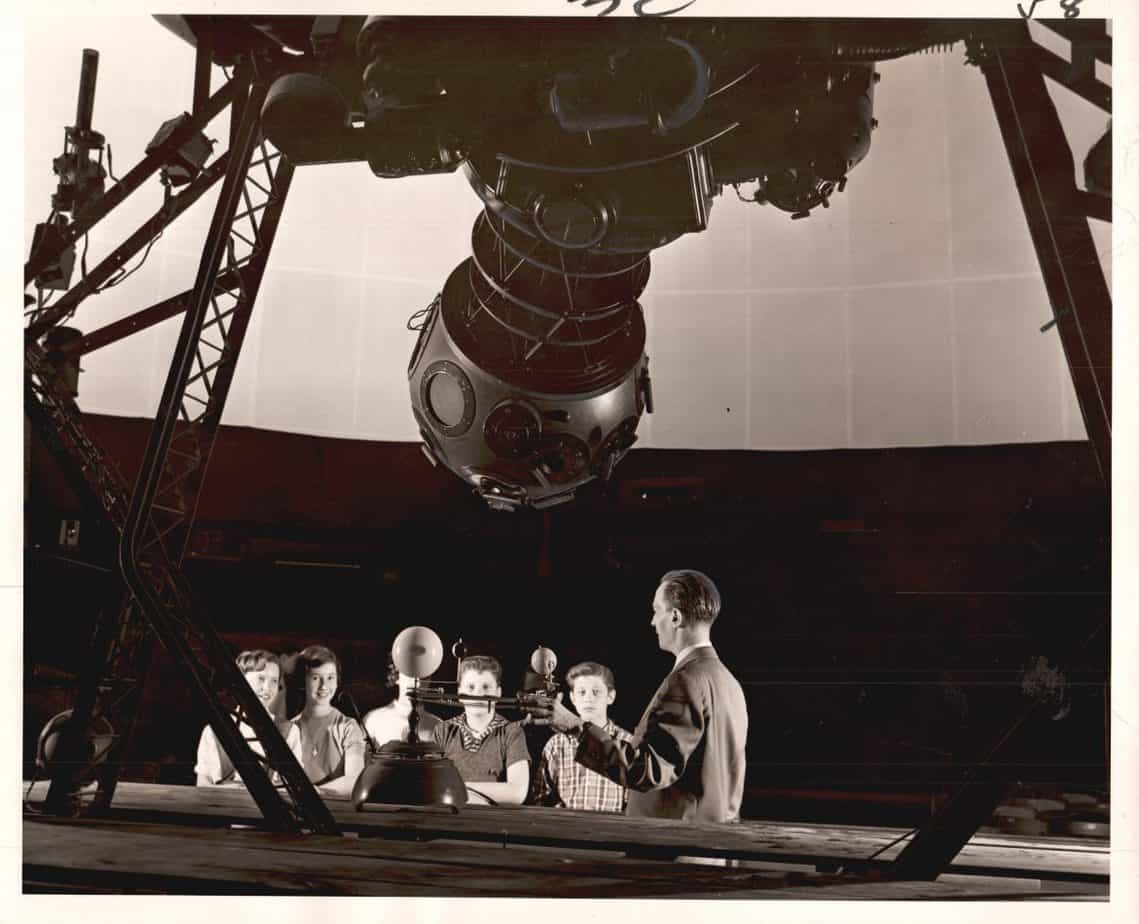 Overall, I haven’t been hugely impressed with some of the “improvements” that have been made on Pittsburgh’s North Side (ahem, Allegheny Center, gag). Anyway, thankfully someone had the foresight to save some of that area’s true treasures including the Carnegie Library of Allegheny, the Allegheny Post Office, and Buhl Planetarium. 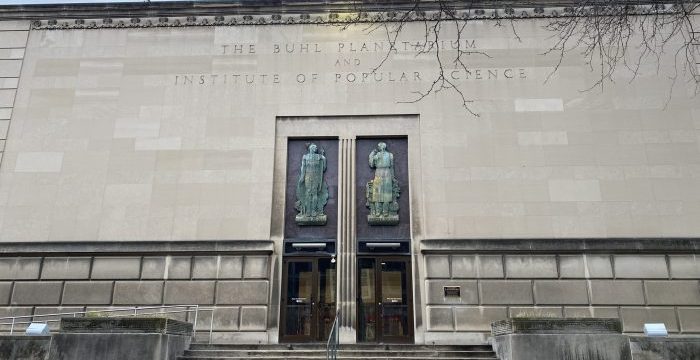 Buhl Planetarium is one that has always stood out to me. I remember my mom and dad taking me there every Christmas when I was young to see the miniature railroad. It was tradition.

The miniature railroad, the star show, the Foucault Pendulum, and even the ball with static electricity that made you hair stand up were all part of the adventure.

The Opening of the “People’s Observatory” 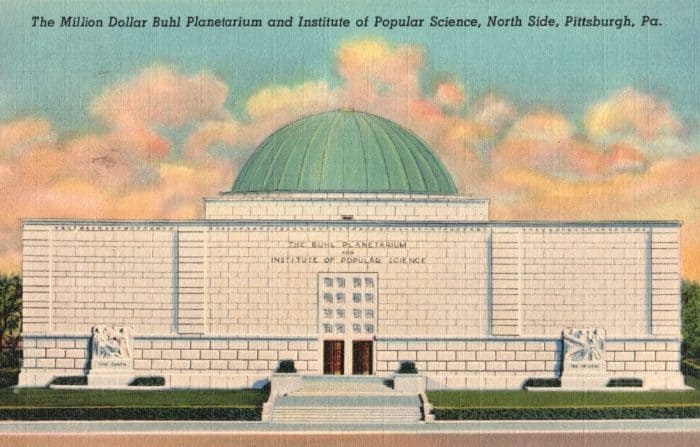 In 1939 through a gift from the Buhl Foundation, the building and furnishing of the fifth major planetarium in the United States was completed. The Buhl Planetarium and Institute of Popular Science cost $1.07 million and was named for Henry Buhl, Jr.

The Buhl family established the Buhl Foundation as a way to share the wealth that they amassed as co-owners of the Boggs and Buhl department store, which was located nearby the planetarium.

Eighteen months after the groundbreaking of the planetarium, it was ready to open much to the excitement of the general public. That first year more than 200,000 visitors experienced what was then an awe-inspiring experience. 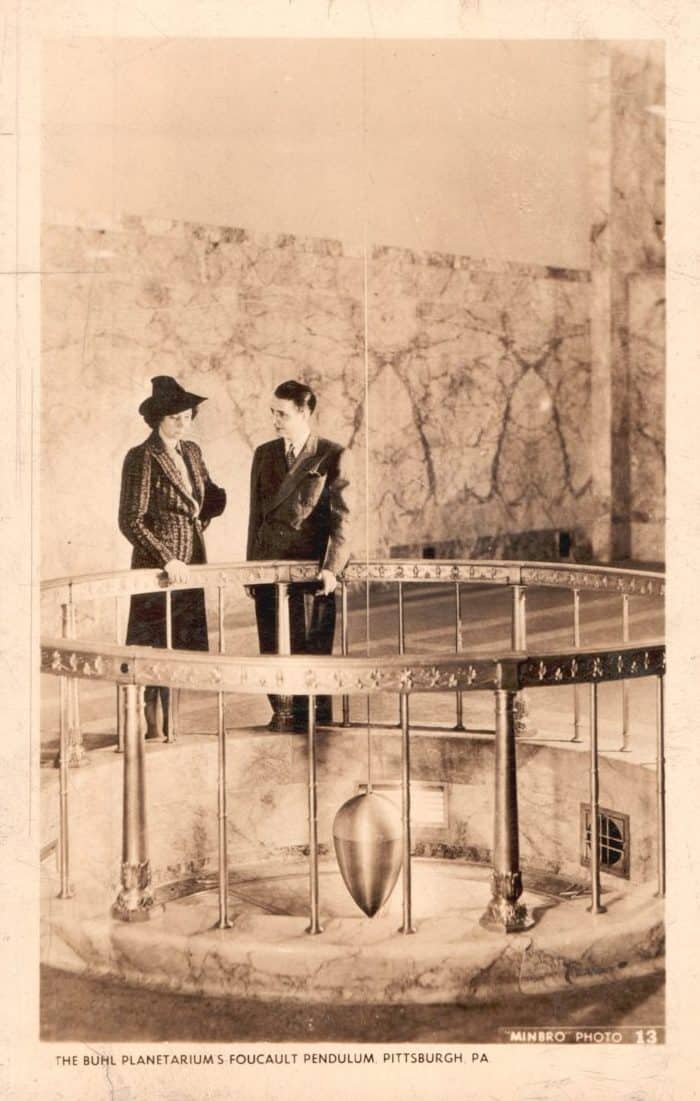 One of the prominent features of the Buhl Planetarium was the Foucault Pendulum which demonstrates the rotation of the Earth as it knocks over pins.

The building was built in a “stripped Classical Style” and featured a 65-foot-diameter octagonal copper dome which held the projector. Also built into the building was a special area to house a 35-foot long Foucault Pendulum which shows the rotation of the Earth as it knocks over pins.

Buhl Planetarium’s “Theater of the Stars”

While Buhl Planetarium featured many exhibits where you pushed a button and listened to a recording, the main feature of the planetarium was the 492-seat “Theater of the Stars” where visitors had the opportunity to experience the stars for themselves. 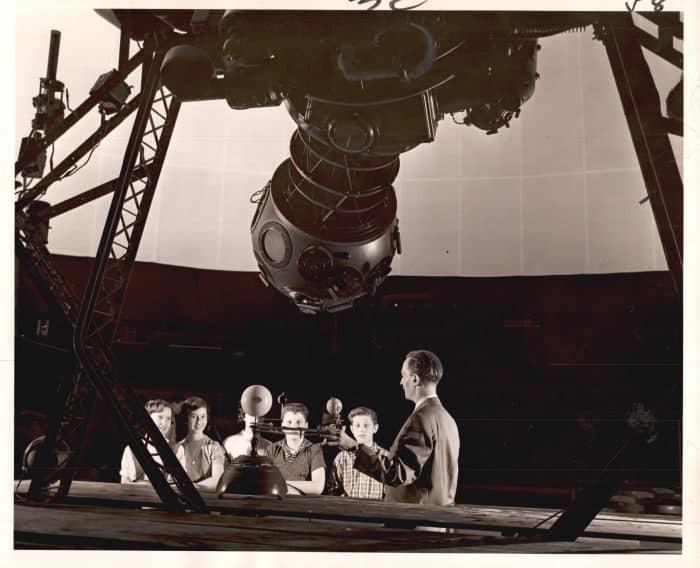 This photo, dated 1965, shows Arthur Draper, director of Buhl Planetarium explaining the revolution of the planets to a group of students. The Zeiss II projector is visible above them.

When the planetarium opened in 1939, space travel was still a long way off so planetariums were the only opportunity to learn about the stars. Thankfully, with the help of the Zeiss II projector learning about space was a possibility.

The Zeiss II projector was pretty much the workhorse of the planetarium operation. Using 106 lenses capable of producing 9000 images of stars, the projector was in continuous operation until 1994 when it was retired. Zeiss had long since making parts of the II Model and the Buhl staff had to custom-machine their own replacement parts in order to keep the stars shining.

The original Zeiss II projector is still on display at the Carnegie Science Center as well as one of its original 1,000 watt incandescent bulbs. Also on display is one of the projection spheres used to project ecliptic, equator, or meridian grids  to align the star fields.

The End of an Era: The Planetarium Moves to the North Shore

Beginning in the 1980s interest began to take shape involving the development of the North Shore, which at the time housed a variety of warehouses and Three Rivers Stadium. City officials felt that a move by the planetarium would help to anchor the development. In 1987 the Carnegie Institute provided funding and in 1991 the Carnegie Science Center opened. 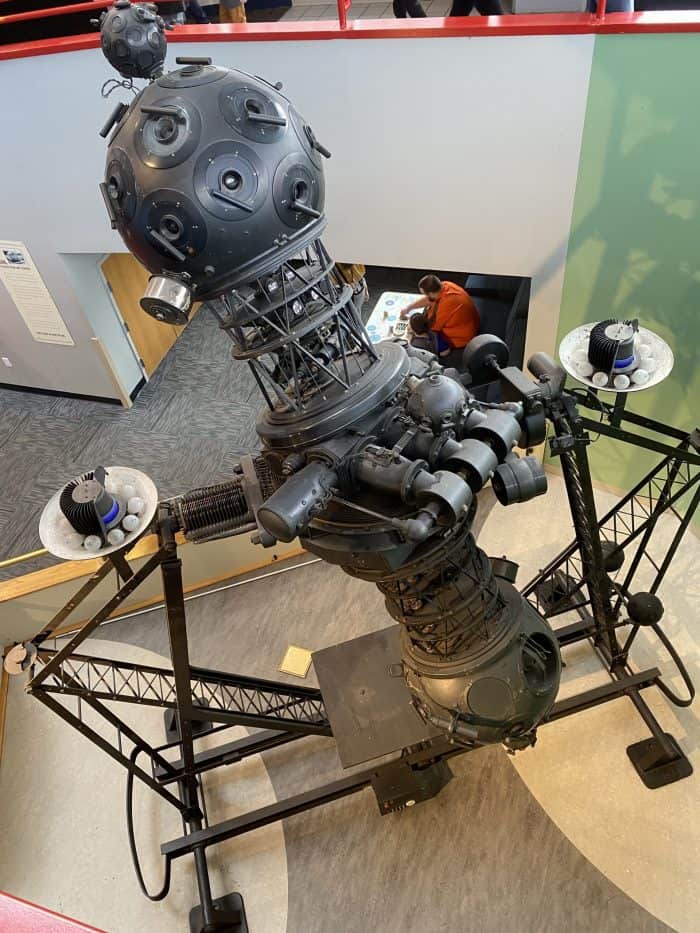 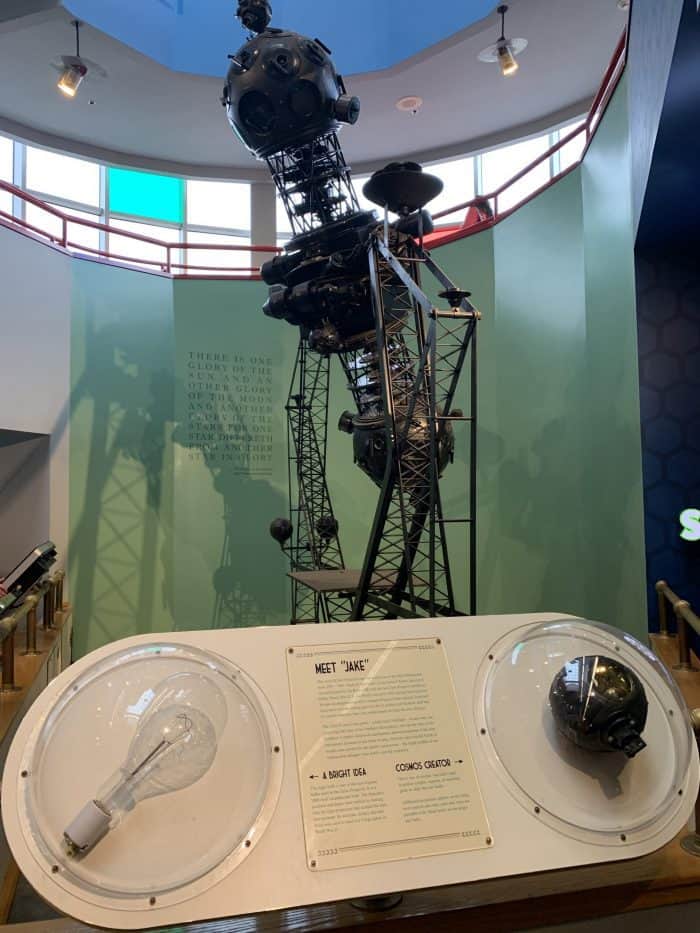 Just a few of the components that made this projector work. 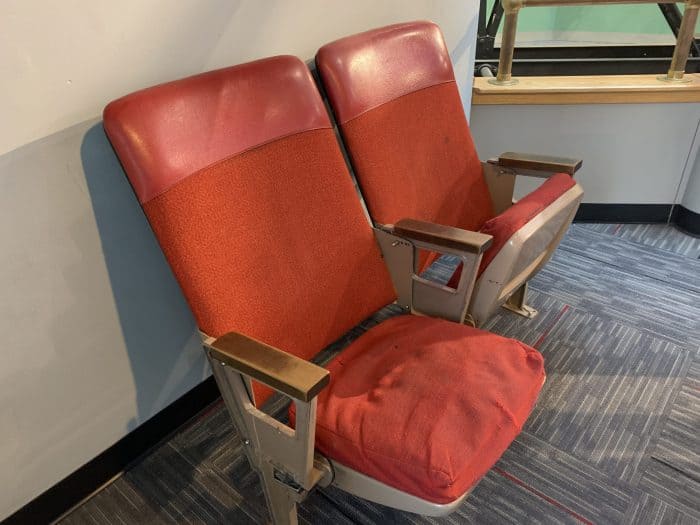 Even a few of the old seats from the Theater of the Stars made it into the Carnegie Science Center.

Since the new science center was a state-of-the-art facility, the equipment including the miniature railroad, the Zeiss II projector, and other exhibits from the old Buhl building was moved to the Carnegie Science Center. 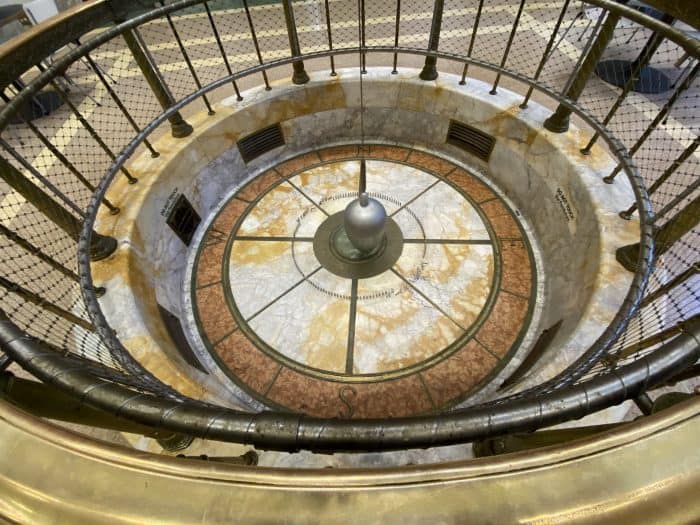 The Foucault Pendulum remains in what is now the cafeteria area of the Children’s Museum.

The Foucault Pendulum remained in the old building.

From 1991 until 2003 the Buhl Planetarium building sat empty with an uncertain future. In 2001 it was named a Pittsburgh History and Landmarks Foundation Historic Landmark. The building found new life in 2003 when it was purchased by the Children’s Museum which at the time was housed next door for a much-needed expansion. 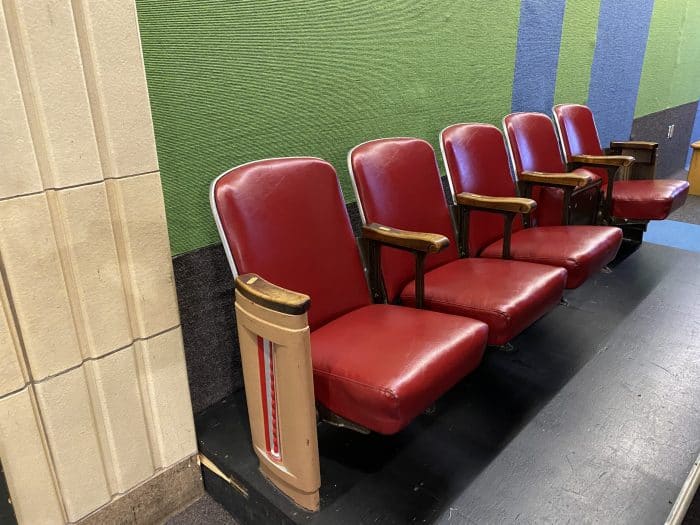 Some of the former Art Deco theater seats can be found in the basement theatre (where the train display once was) in the Children’s Museum.

I love that the Children’s Museum was able to reuse the building while still maintaining many of the architectural elements. The former dome is now part of an interactive exhibit, the Foucault Pendulum is operational in the cafeteria, and all of the beautiful marble is still intact. If you ever want to check out some of the seats from the original Theater of the Stars, you can find some in the children’s theater in the basement of the old Buhl building at the Children’s Museum or on the first floor of the Carnegie Science Center.