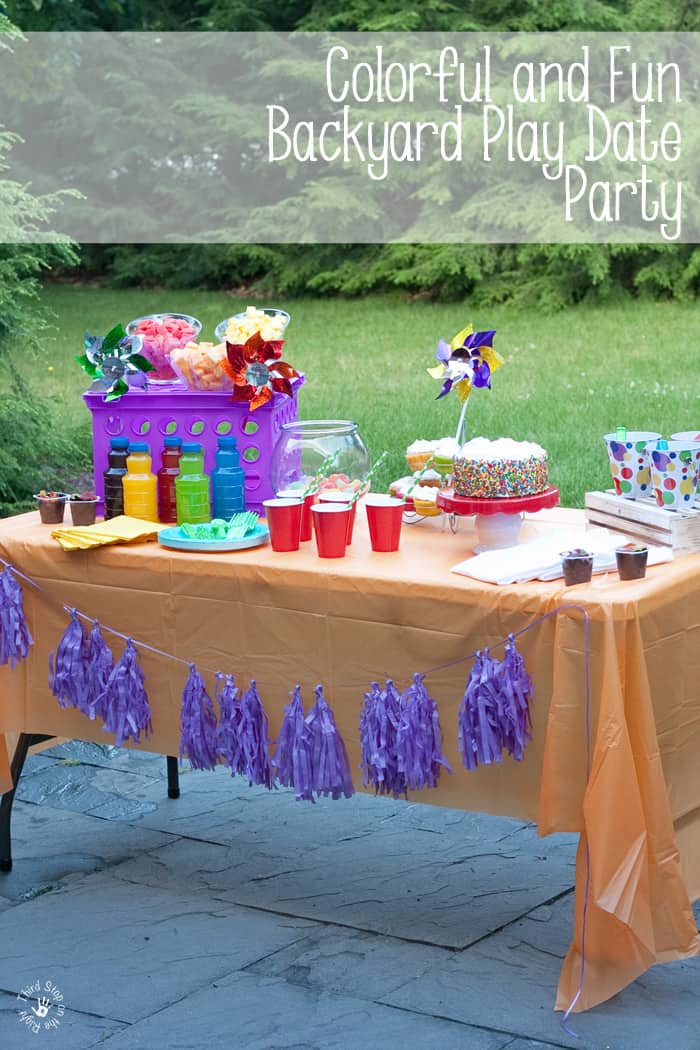 This shop has been compensated by Collective Bias, Inc. and its advertiser. All opinions are mine alone. #FreeToBe #CollectiveBias

I love hosting playdates for my boys and their friends, especially ones in which I can be really creative. Recently, I knew some good friends and their children who are my boys’ ages would be coming over. I decided to throw a colorful backyard party.

I wanted the boys to be able to play and have a good time while also being able to express themselves. Both of my boys like fun, bright colors so I decided to embrace that and try to bring as many colors into the party as possible.

This is why I chose a variety of colors for things such as the drinks and the tableware. I even had multicolored juices for the boys to enjoy!

One of my favorite things for this party was the rainbow sprinkled cake and cupcakes, especially with the cake on the red cake stand. I think that this just really made things pop!

Of course I also wanted to include some colorful healthy snacks for this party so I created a fruit bar using cantaloupe, watermelon, and pineapple. All of our kids are fruit junkies so the fruit bar was something that they loved!

Since this is a backyard play date and little boys tend to get really dirty I made them some dirt cups. These are actually very easy to make.

You will want to begin with some chocolate pudding cups. I spooned the contents of the pudding cups into a separate bowl and mixed in some crumbled, chocolate cookies. Then I put the mixture back into the pudding cup and sprinkled more of the crumbled cookies on the top of the pudding. I finished it off with a gummy worm to make it look more like a container of real dirt. It turned out so cute!

For this party I had a big surprise in store for the boys. I decided to do a colorful water balloon fight with them! I bought some balloons that had food coloring inside of them that they could throw at each other. Not only would they get wet, but the balloons would also leave colors on their shirts. Of course, I knew that this would be a messy sort of game, but it would also be something that they would love!

As one of the party favors I laid out white t-shirts for each of the boys. This way, they were able to grab a white shirt before the water balloon fight so they could see exactly where they were hit by the balloons. Plus, since we were planning on getting dirty this would keep their good clothes clean.

I filled a big tub full of the water balloons and let the boys go to town! They had a blast running through the yard bombarding each other with the balloons.

Of course by the time the water balloon fight was over, the boys shirts were covered not only in colors from the balloons but also from dirt from the yard as well as food from the party. They were a mess!

Obviously the shirts would all need to be washed, but I also know that some of my friends’ children as well as my own have allergies to fragrances and dyes. My family already uses all® free clear laundry detergent as well as all® free clear mighty pacs®. This is the #1 detergent recommended by dermatologists, allergists, and pediatricians for sensitive skin — something my family definitely has!

Even though all® free clear is sensitive on the skin, it works just as hard to fight tough stains, whiten whites, and brighten colors. It even removes allergens such as cat and dog dander, dust mite matter, ragweed, grass, and tree pollen.

So after the boys were done playing, I gathered up all of the dirty shirts, took them to the laundry room and loaded them into the washing machine, and used some all® free clear (you can actually use two of the mighty pacs® for extra soiled laundry) and hot water to wash them. I was a little concerned about that red watermelon juice coming out of Little E’s shirt but I threw it in anyway.

After the shirts were finished washing, I took them out of the washing machine and was amazed at how they looked! It looked as if they had never been covered with the coloring from the balloons, the food, or the dirt. In fact, they looked brand new. Plus, I didn’t have to worry about any dyes or fragrances bothering the any of the boys.

Comment On: Is your family also sensitive to dyes and fragrances? Continue the conversation by joining the all® free clear community and connecting with parents just like you!