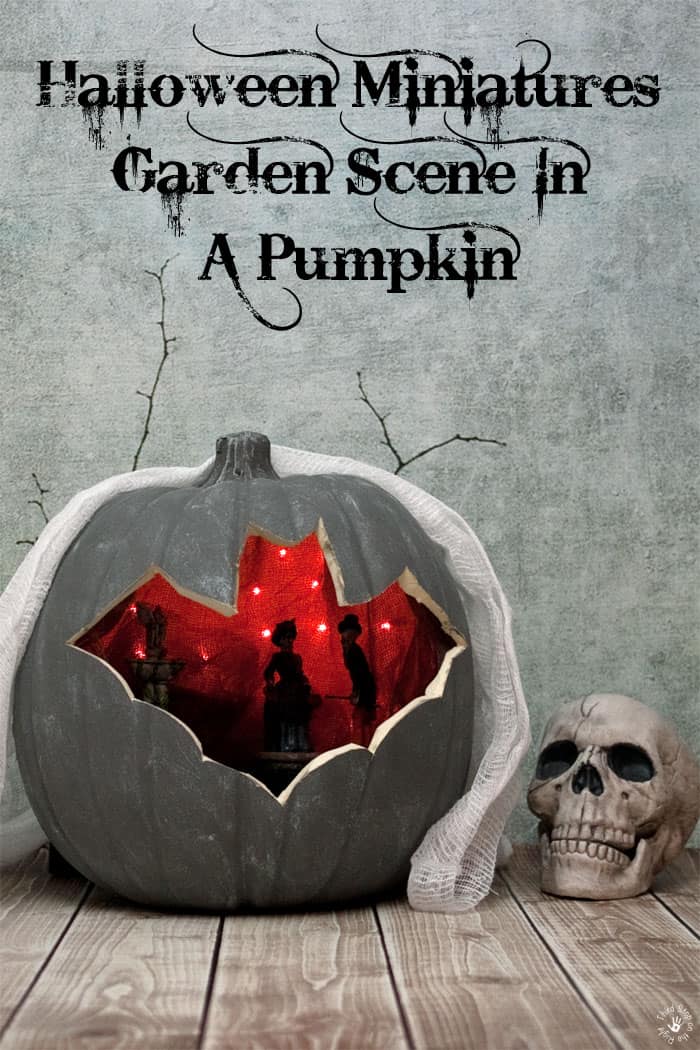 I love miniatures. Maybe it comes from the fact that I had a dollhouse when I was younger and have always been fascinated by them. I also love Halloween. So, what can be better than Halloween miniatures?

When I was at the craft store recently, I found these adorable Halloween-themed miniatures. Some of them included witches on brooms, “former” crazy cat ladies, and even this Victorian skeleton couple that I found. I decided to use them to create a cute miniatures scene.

I decided to get a little extra creative with the scene. I purchased a grey craft pumpkin. I decided to cut an opening in the shape of a bat.

I printed out a picture of a bat. I cut out the bat, leaving about an extra inch around the edges.

Then, using straight pins, I pinned the pattern to the craft pumpkin. Make sure to use enough pins so that it makes an outline of the whole pattern. Remove the pins and the pattern.

Use a hot knife with an X-acto attachment to cut around the dots and cut the shape of the bat out.

I also found a strand of 20 orange mini lights. Using one of the pencil-like hot knife attachments, I punched 20 small holes in the back of the pumpkin. Push the mini lights through the small holes.

Now you’ll have wires sticking out everywhere. Since the pumpkin is grey I used grey Duck tape and put it over the wires to smooth them down some. (Don’t worry, we will hide it even more later.)

The lights are pretty bright and I decided to mute them a little but adding a cheesecloth drape. Just cut a piece of decorative cheese cloth and attach it in a drape fashion with hot glue.

Insert the disk inside the pumpkin. Then, using hot glue I attached the skeleton couple as well as a ghostly water fountain. Obviously, I was going for a park scene.

To finish off the pumpkin, and also to hide the rest of the cords, I draped another piece of cheesecloth around the top and sides of the pumpkin.

Now you have a cute and creative (not to mention spooky!) decoration for Halloween. Plus, if your kids are anything like mine they will love it!