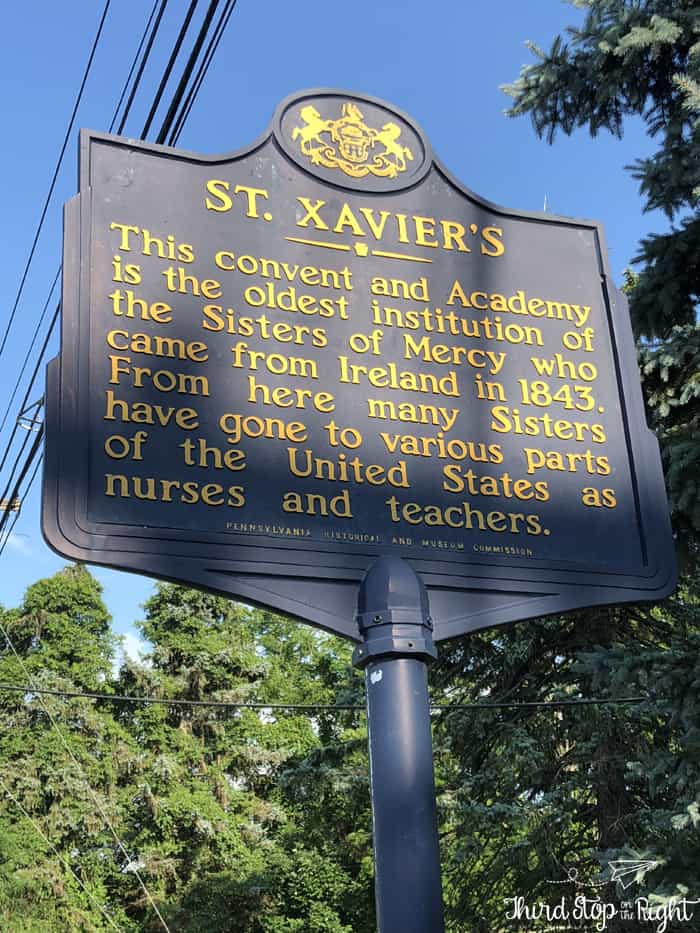 Home Gone, Not Forgotten Searching for Clues: Where was St. Xavier’s Academy in Latrobe

Searching for Clues: Where was St. Xavier’s Academy in Latrobe

You’ve probably zoomed past the historical marker at the crest of Route 30 across from Wimmerton lots of time, but have you ever wondered what St. Xavier’s Academy was and what happened to it?

When I was younger I passed the sign and the historical marker tons of times, but one time I asked my mom what was back there. She said that there had been a school back there but it burned down years ago. I didn’t give much more thought to it until several years ago when I really started getting into local history (not to mention we had bought a house down St. Xavier Road) that I really began to start wondering about the old school. I wondered where it was located and were there any clues to what was left.

St. Xavier’s was originally started by the Sister’s of Mercy who came to the United States from Ireland in 1843. It is actually the oldest institution of the Sisters of Mercy. Originally started in a small building at St. Vincent, Mount St. Vincent Academy for Young Ladies started in 1945. In 1847 with the help of a donation from a local benefactor, St. Francis Xavier’s Academy was opened.

It operated as an academy for women, run by the Sisters of Mercy, up until 1972 when a large fire destroyed the entire building.

One evening when I was on my way to Walmart I decided to stop at the site and see if I could determine where the old school was located. I had read some conflicting things about where exactly the school was situated so I decided to figure it out for myself. When you leave Route 30, there are two roads. One is St. Xavier Road which has the old convent house, which once welcomed new recruits but is now used for offices, sits. The other was the path that led across the lawn and through the trees to the school itself. This one is gated off.

A remaining vestige of the former school is a statue of the Blessed Mother that stands at the entrance to the driveway. In fact, you can see this exact same statue on the right-hand side in one of my old postcards.

As you can see the path that leads to the school is slowly being taken back over by nature. Cracks are forming in the pavement and the overhang of trees is getting more dense. However, the grounds are very well taken care of. I followed the path through the grove of trees until I got to some benches, a large cluster of shrubs, and a clearing. My intuition told me the clearing was where the school once was since the benches seemed to be undisturbed, but I wasn’t sure.

I happened to notice that inside the large clump of shrubs there seemed to be the pedestal for a statue. The statue had obviously been removed, and the shrubs seemed to have been planted to obscure it.

When I went home I dug out some of my old St. Xavier’s postcards and sure enough, there was a statue with the same sort of pedestal that was once facing the academy. This meant that my suspicions were correct and the statute (which we figured out was one of St. Xavier) had been facing the clearing where the school once stood. You can see the statue on the left of the postcard.

Although there isn’t much to see anymore, the grounds of the former St. Xavier’s academy are still well-maintained and very peaceful. It’s a shame that I never actually got to see the school, but if anyone has any pictures they would like to share, I would love to see them! Also, if anyone knows what happened to the St. Xavier statue I would also be interested in finding out!

Don’t Break the Bank! Save $1 on Wet N Wild Products

I learned about your blog/web site and have to tell you that I really enjoy it! I am so glad to read your story and see the pictures of St. Xavier’s. I was a sophomore in high school when it burned down. I remember my mother and I drove around the site at one time and you could see the school from the field along Route 30. I am Catholic and so I was interested in the school although I never attended. Several times I have walked through the grounds (you can park at the sisters cemetery below and walk up the path) and also tried to pinpoint where the actual structure stood. I am amazed at the research you’ve done!

My mother went to St. Xavier’s Academy when she was just a teenager. Mom passed about five years ago just shy of 80 years old. I miss her and have been thinking about her life, which brought me here. My dad was in college at St. Vincent’s nearby at the same time.

My best high school years (my junior and senior years) were spent at St. X (as we used to call it). I was a student there in 1961 – 63. I went to West Virginia University where I got my bachelors in teaching (with major teaching fields of biology, speech and drama), and went on to do a Master of Arts in Theatre at WVU—and finally got my Ph.D. at Pitt in Theatre Arts. I really spent most of spare time while at St. X working on the plays and musicals at St. Vincent Prep, and I have always said I owe my career in theatre to my time at St. X and St. Vincent’s. So St. X will always have a special place in my heart.

I was also a student at St.X.(60-61) school year. Boys up to grade eight were also students when I was there. I was taught sixth grade by the best teacher I ever had, her name was Sister Aldegondes. (Spelling of her name not sure). It was a classroom of about 20-25 boys and girls . Also believe it or not half the class was fifth graders. Sister taught both classes 5th and sixth grade in the same room at the same time.
From the pictures and post cards I can still see the room window where I slept . Facing the school, the boys wing was on the right and the girls dorms were assigned to the main building all dorms were upstairs floors 2 and 3 . Behind the wing on the right the land sloped down about 100 yards as I remember and then back way up another hill where we would sled ride down in winter snows. A male student from St. Vincents would come across and coach the boys and watch us during hikes and outdoor activities.
Thank you for the posts and pics.
I very much remember going down to breakfast in strict silent lines (tallest in back short boys up front) . The cafeteria was down in the basement of the main building toward the back. It was always warm down there due to the boilers .I sure they were coal.

I attended St. Xavier and graduated in 1966. It was such a beautiful school. Too bad you couldn’t see it.

My aunt was a Sister of Mercy, Sister M Norbertine. Spent many summer days there in the ’50’s & ’60’s, picnicking and running around with my extended family while visiting.

I was actually in the building on the day of the fire – March 16, 1972 – as well as my brother and two sisters. I remember the building and grounds well and have stopped there to visit and remember often. I would love to hear from any others who were students at the time of the fire.

My mother attended, graduating around 1935 or so. My great aunt, Sister Mary Theophane, taught sciences at the school and is buried in the cemetery there. The cemetery is well worth a visit. You will see veterans’ flags on many of the sisters’ graves, since they were nurses of returning wounded from the Civil War as well as during a cholera epidemic.