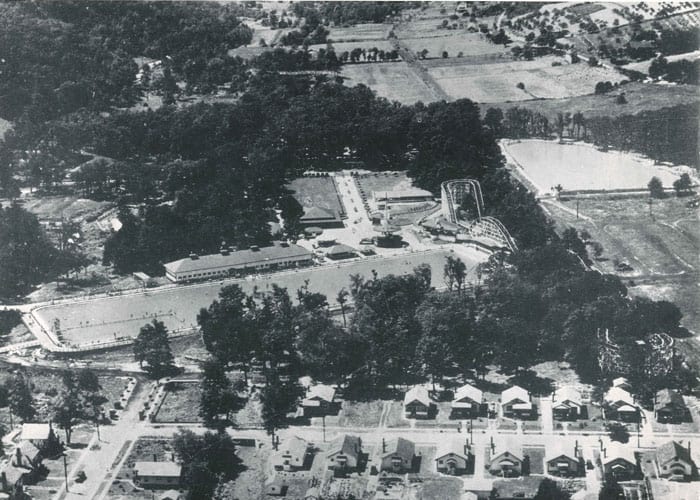 Ivyside Park: How An Amusement Park Became a University

I’ll let you in on a little secret. When I was in college I was one of the students who would give campus tours to prospective students. One of my favorite stories to tell the families was the story of how a one-time amusement park, Ivyside Park, eventually became the branch campus of Penn State Altoona.

The story starts out simple enough. Raymond E. Smith, an Altoona resident, had an idea to start an amusement park. Smith had the money and his neighbor Harry Gwin had the land, so the two decided to get together and make the park a reality.

Where the two meant chose to place the park was adjacent to an already-established body of water which was used for ice harvesting in the winter. This was important for the gigantic swimming pool that Smith planned to build. 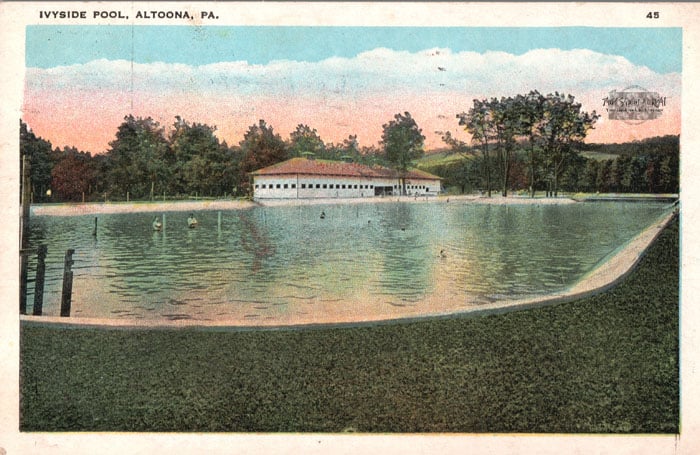 A view of the 650-foot swimming pool from the diving section. The white building on the left is the bathhouse. Notice there are no rides at the park yet.

Now, back in those days public swimming pools were a big deal, and this swimming pool was designed to be like none other. Measuring 650 feel in length and 186 feet wide, Ivyside Park’s pool could easily hold 5,000 swimmers. It started at a depth of just six inches and went to a depth of 13 feet in the diving area. The area surrounding the 150-foot wide diving area was only five feet.

Since construction on the pool started in 1923, use of any engine-powered equipment was extremely limited. Most of the excavation was done by hand. After the pool’s foundation was dug, a concrete base was poured along with concrete curbs.

Now, to that body of water.

The natural pond was used to create a warming pond for the giant concrete swimming pool. Water was held in the pond, which was slightly more elevated than the swimming pool and water was pumped into the pool using a pipe system. 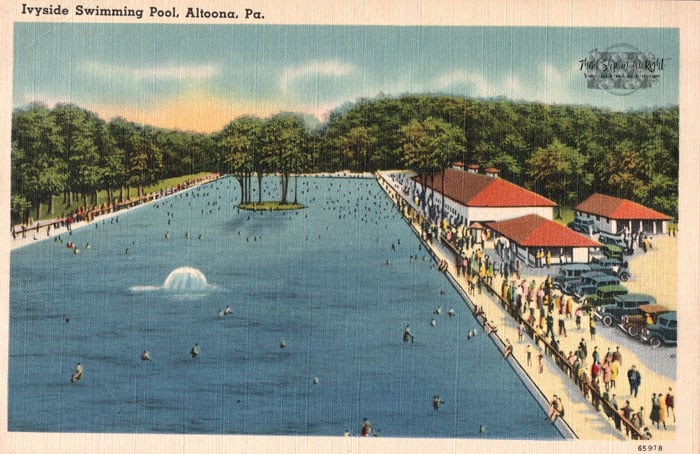 The pool which was said to be the world’s largest concrete swimming pool, featured an island with trees which was popular for swimmers to swim out to and relax on.

The pool and surrounding picnic grounds were an immediate success. To accommodate the large crowds, an even larger bathhouse was built. The 250-foot long, 2-story bathhouse was a focal point at the pool. The first floor of the bathhouse held the ticket booth, refreshment stand, and changing area for the lifeguards. The second story of the bathhouse haws the changing rooms. 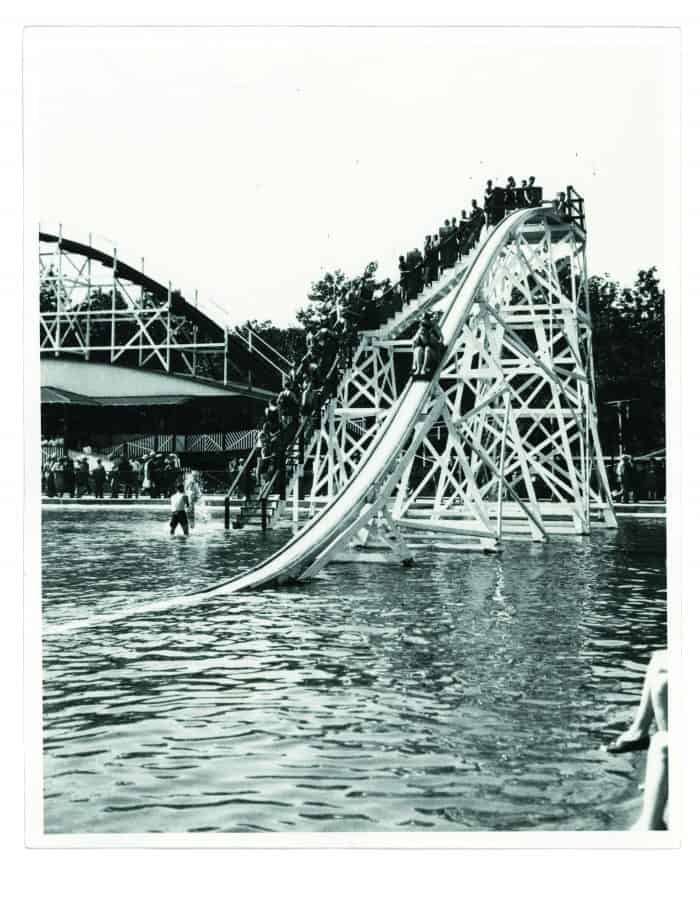 At one point there was a slide installed in the pool as can be seen from this photo. Judging by the line it was quite popular! The Sky Rocket can be seen in the background as well. (Photo courtesy of Penn State Altoona Library)

The diving area of the pool had a variety of platforms for different skill levels. The most notable was the Olympic-sized platform, but there were several smaller diving boards as well. This area was sectioned off which can be seen in several of the pictures. 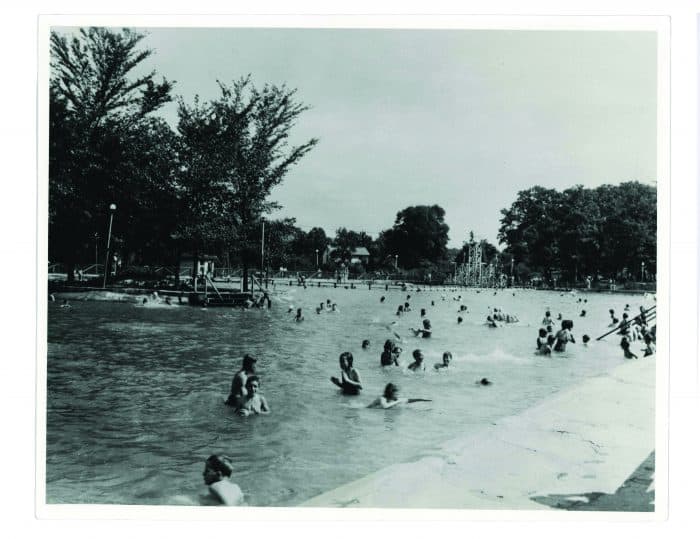 This photo gives us a better view of the island that was in the pool. The island can be seen on the left and the amusements on the right. (Photo courtesy of Penn State Altoona Libraries)

An island with trees located in the middle of the pool was a popular gathering place for swimmers. 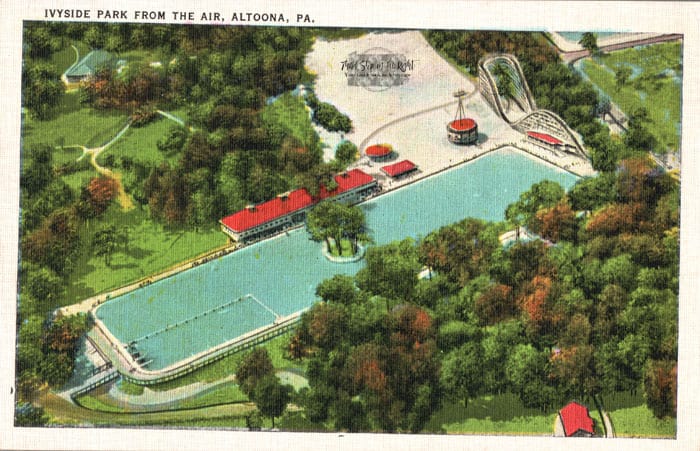 This aerial view of Ivyside Park shows the Sky Rocket rollercoaster to the far right. Beside it is the circle swing. Also visible are what are now the Pine and Elm buildings. The diving section of the pool is at the far left.

In 1925, rides came to Ivyside Park. Two gentlemen from New Castle made a deal with Smith to operate the rides as concessionaires. Smith also ran several amusements of his own, including a shooting gallery. Rides including a Circle Swing and the Sky Rocket rollercoaster were soon installed.

I really wish there was more information on Ivyside Park’s Sky Rocket rollercoaster. It was designed by John A. Miller and its obvious from the pictures it was an out and back coaster. Unfortunately, I’ve never seen any close-up photos of the coaster itself or any photos of the cars. 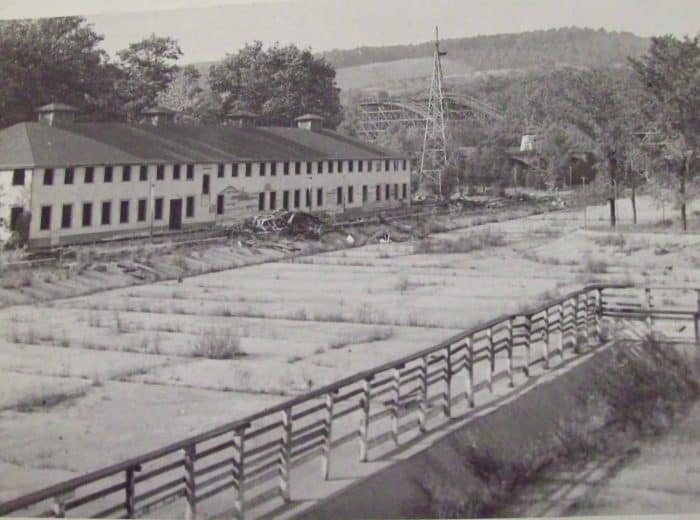 This was the state of the abandoned amusement park when it was purchased by the Altoona Undergraduate Center in January of 1947. Note the diving area in the foreground and the roller coaster and circle swing in the background. (Photo Courtesy of the Penn State Altoona Library)

Trouble came to the park in the 1940s. After weathering the Great Depression, the park was almost immediately hit with wartime gas rationing. By this time, the rides were no longer operating and what was left was only open on a limited basis. The park had returned to its swimming pool and picnicking roots.

The final blow to the park came in 1945 when Raymond Smith passed away.

Neither Smith’s widow nor his children had an interest in keeping the park running. The park was closed permanently in 1946 and sat abandoned for two years.

At the same time the park was closing, the Altoona Undergraduate Center (Penn State Altoona’s original name) was operating out of a space in downtown Altoona and was looking for a new space. Smith’s widow wanted the property to go to a worthy cause and eventually in 1947 the Undergraduate Center and Mrs. Smith came to  purchase agreement — $35,000 — exactly what was owed for taxes.

The Beginning of “Bathhouse U”

Although you wouldn’t guess it now, Penn State Altoona had very humble beginnings. The first group of students to use the former amusement park as a university reused much of what was left over from the park. The bathhouse became offices, classrooms, laboratories, and a library.

The former dance hall, which had become a roller skating rink in the late 1930s, was made into the student union building and cafeteria. The old bowling alleys were the college’s first and only athletic activity. Even the bed of the old swimming pool became parking for students.

The shooting gallery Raymond Smith had managed? That became the chemistry lab and a concrete refreshment stand was converted Ito a service building and heating plant. 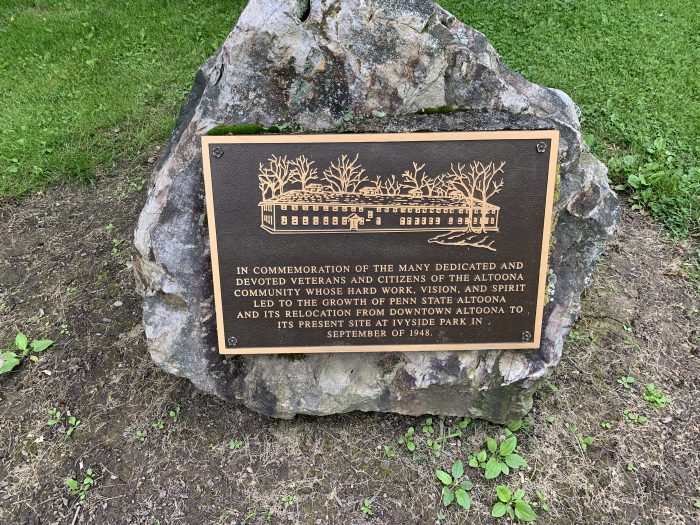 A plaque dedicated to the first students and those who made “Bathhouse U” possible.

In 1958, more than ten years after the opening of the Penn State Altoona branch campus the E. Raymond Smith Building was built to replace the old bathhouse and the campus’ name was changed to the Altoona campus of The Pennsylvania State University.

Not much remains from the Ivyside Park days. The swimming pool is just a memory as is the Sky Rocket roller coaster. All of the buildings that had comprised the original amusement park have all put disappeared … almost. 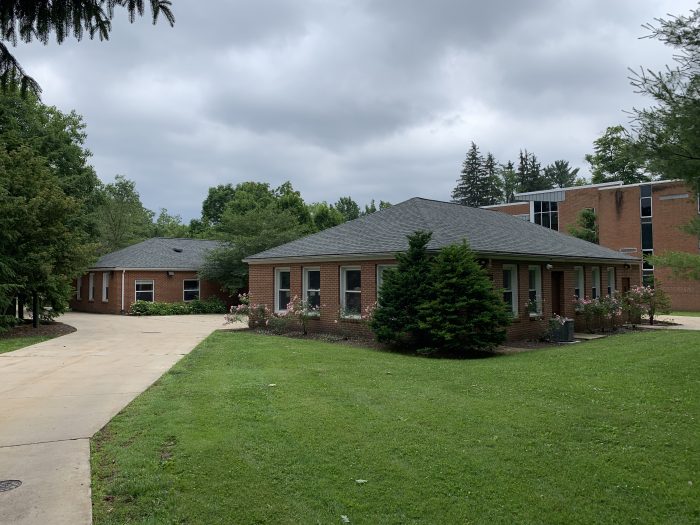 The Pine and Elm Buildings are the only remnants left of the original Ivyside amusement park.

If you look closely, there are two small buildings, the Pine and Elm buildings, which still stand from the original Ivyside Park. Elm was the original shooting gallery, while Pine was the concrete refreshment stand. Of course, the gigantic natural pond which served as the warming pond is also still there. 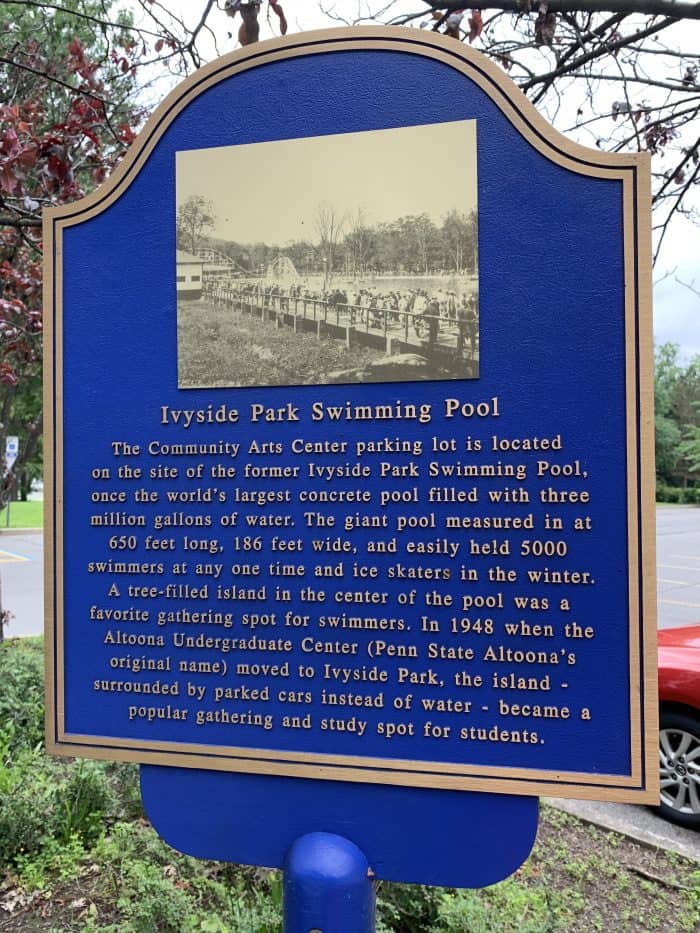 If you head down toward the lower part of campus, below where the pond is, you will find several historical plaques telling the history of Ivyside Park and how the property once was an amusement park. It’s nice that the school still recognizes this unique history.

Although Ivyside Park is just a memory, Altoona is still home to another historic amusement park which is still in operation. Lakemont Park is home to the world’s oldest operating rollercoaster, Leap the Dips, and the last surviving figure-eight side friction coaster in the world as well. This park also has a fantastic history and is well worth the trip. 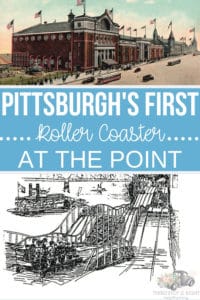 Great site! I’m from Butler, Pa and we have Alameda park. Originally built by the local trolly company. Only the carrousel structure remains.